Margot Flynn Chavez and her husband, Danial, chose the worst time for a renovation. The couple purchased their Littleton, Colorado abode in April 2021, at the peak of supply chain shortages and delays. Yet despite limited resources, they achieved their dream black-and-white kitchen.

The house was originally built in 1971, so the existing kitchen was cramped and dated. Light pink tiles covered the floor, counters, and backsplash, creating an eyesore Chavez simply couldn’t tolerate. Fortunately, the software engineer and photographer also has a design degree, so she immediately had a vision to reimagine the space. 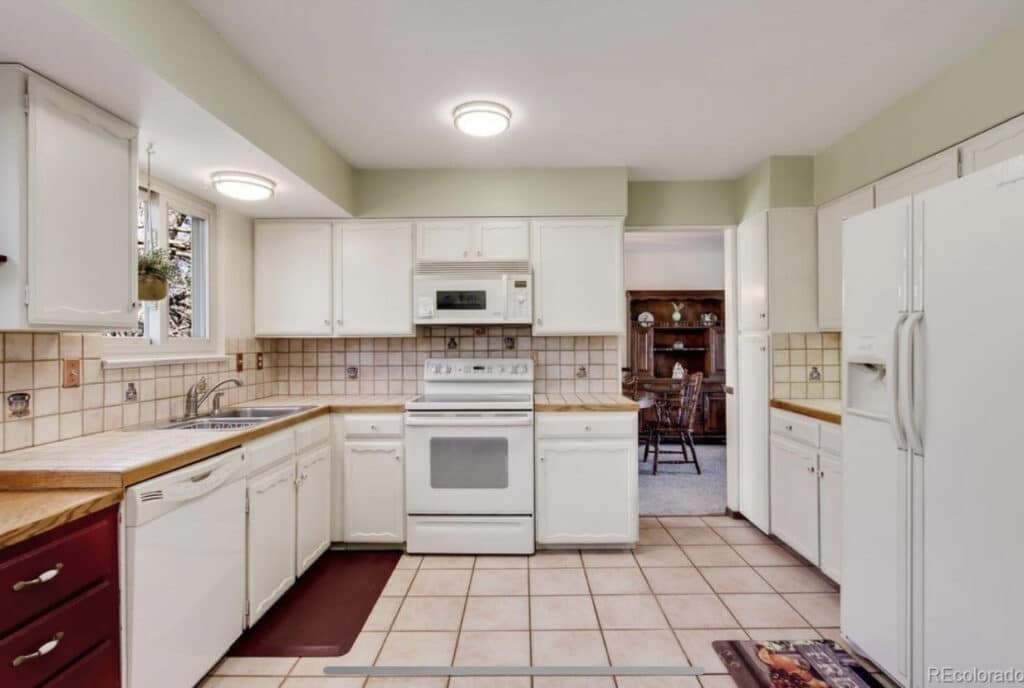 Chavez, alongside her husband and handy father, gutted and rebuilt the kitchen almost entirely themselves, ensuring the craftsmanship and aesthetic were exactly what they wanted. The result is a warm, personal kitchen that honors the home’s midcentury roots while still bringing it into the 21st century. Ahead, Chavez shares exactly how she pulled it off. 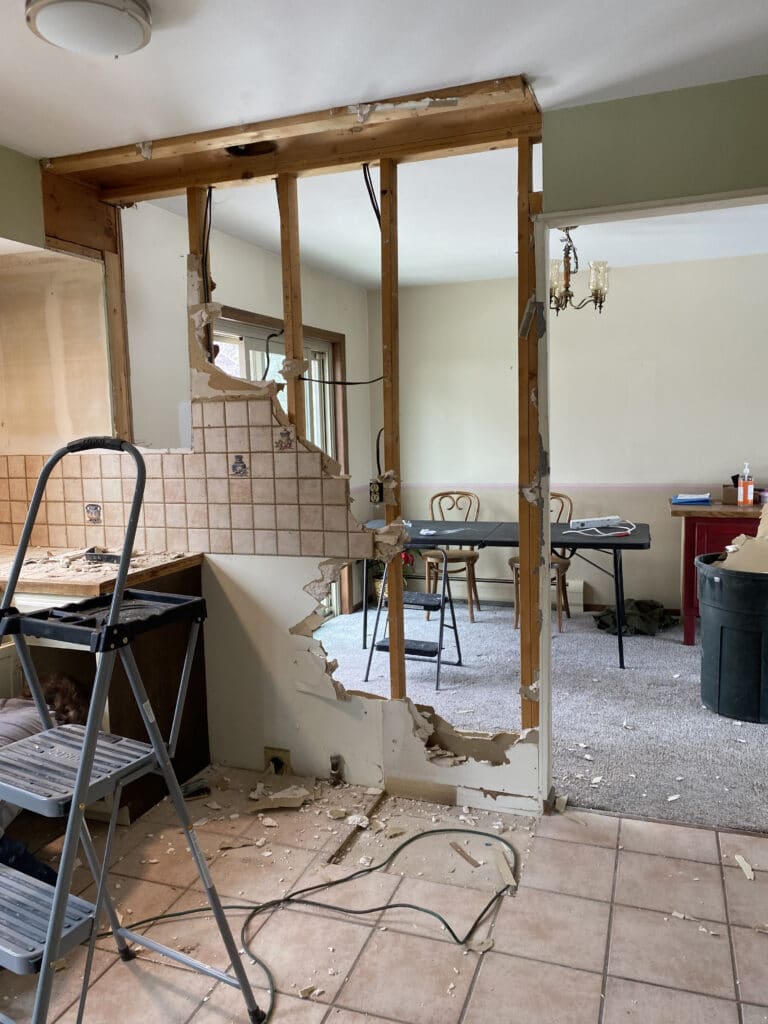 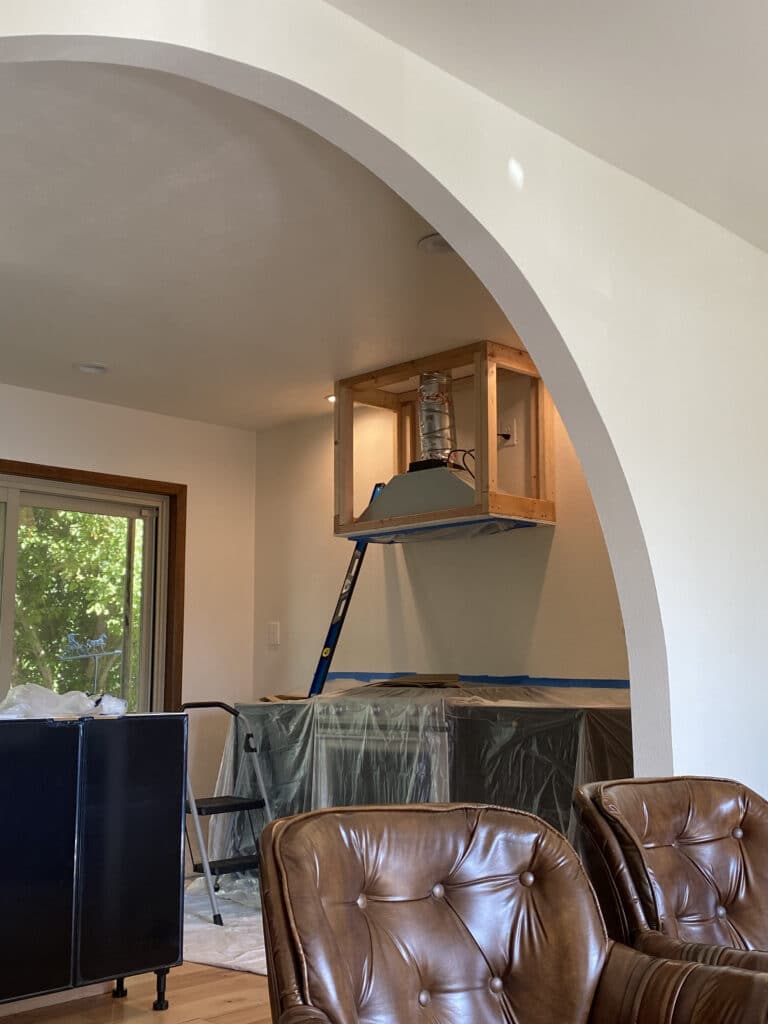 Though Chavez needed a bigger kitchen — and the trussed roof would’ve easily allowed it, she was adamantly against accomplishing a sense of airiness with an open floor plan. “A lot of people just wipe all of the walls out of the central space, but I don’t particularly like that style,” she admits. “I like the coziness and intimacy of having enclosed rooms.”

Instead, Chavez gained an extra six feet by eliminating the formal dining room and constructing a wall to delineate a small breakfast nook. She also fashioned a perfectly round, 9-foot arch that leads to the living room, so the areas are separate yet connected. “I wanted to have a statement piece, as far as architecture, that added a little bit of interest,” she explains. 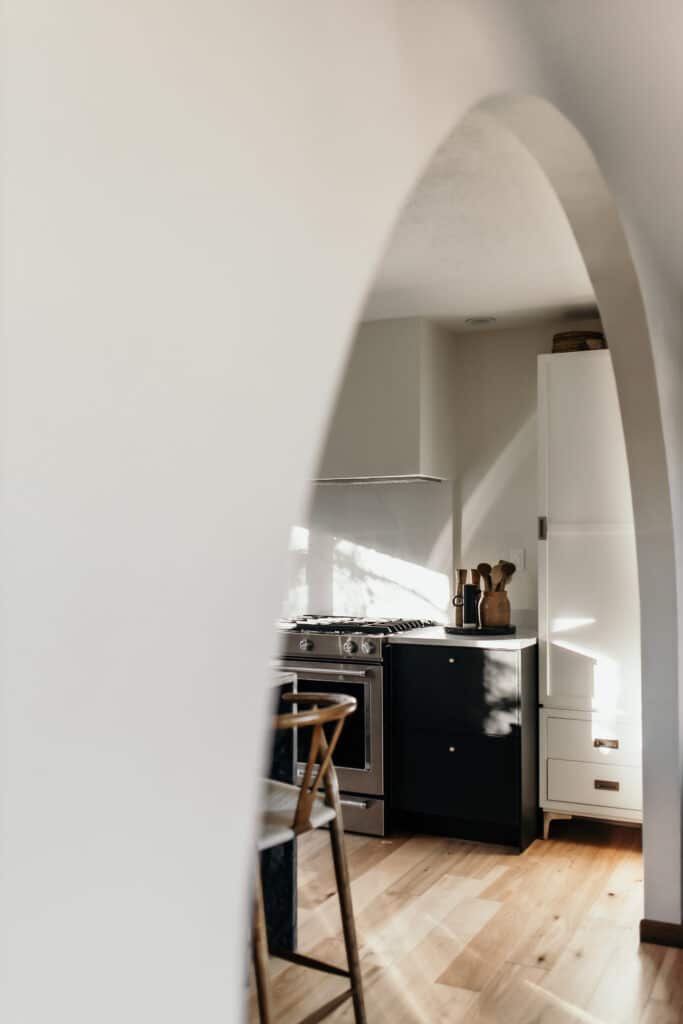 For the color palette, Chavez was set on the classic combination of black and white. She opted for cozy Swiss Coffee by Benjamin Moore as a backdrop because black cabinets were a must. “That’s something I’ve been dreaming about and Pinteresting for many years,” she says. “Black cabinets are very timeless. It’s hard to go wrong with them.”

When it came to actually buying cabinetry, however, Chavez struggled to find a company that could deliver within her desired timeframe. BOXI by Semihandmade wasn’t yet available in her region, but she inquired anyway and was pleasantly surprised to learn her order could be fulfilled — and quickly, at that. “BOXI ended up being a godsend for us,” she reveals.

The Peppercorn Edge fronts were exactly what Chavez was searching for: a mix of traditional Shaker-style with a modern touch. She further customized her storage system by installing IKEA hidden drawer inserts within the BOXI cabinets and incorporating modular Crate & Barrel bookcases to act as pantries. “I’ve always loved the look of an unfit kitchen — the very deVOL, English style,” she describes. 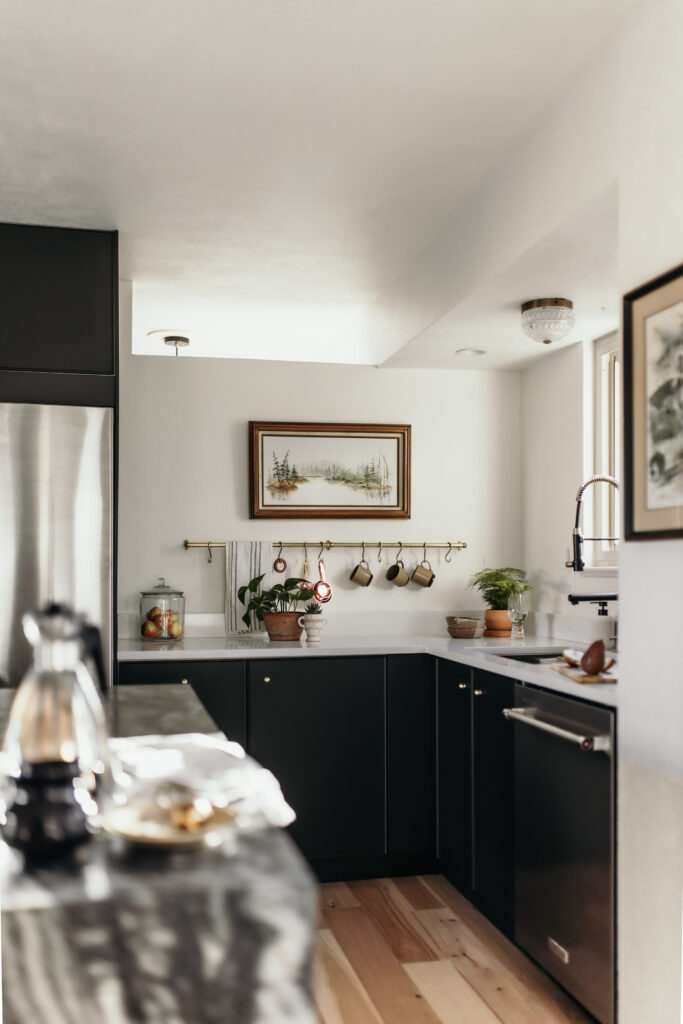 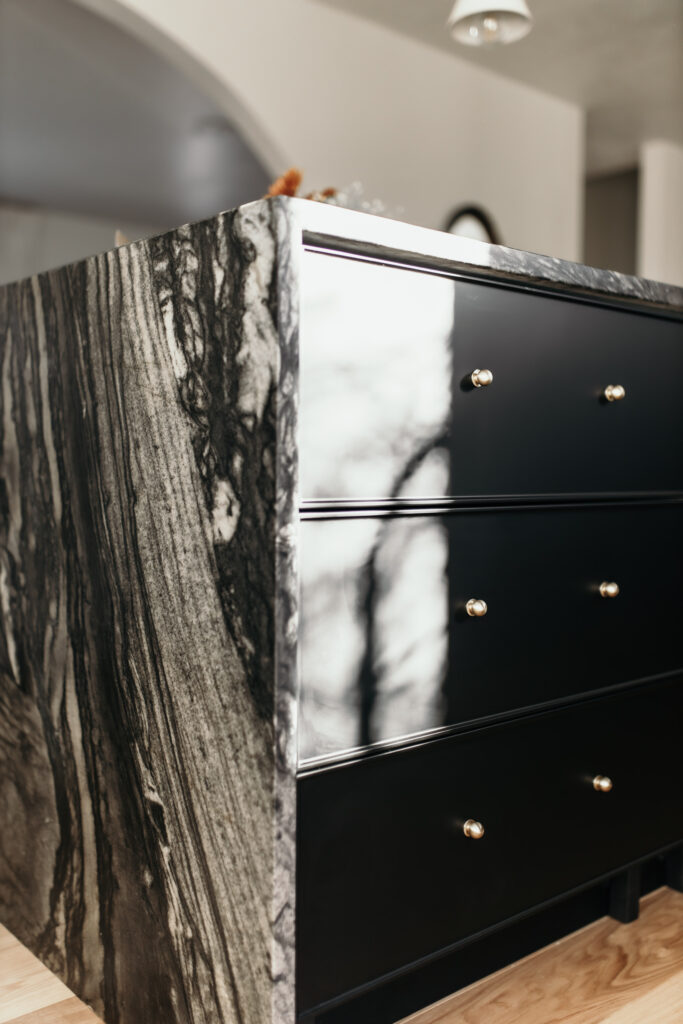 Chavez got creative with the island, too, pairing BOXI uppers and lowers for the just-right size. The piece is topped with a show-stopping natural quartzite — which was never part of the plan. Chavez was going to use white quartz throughout, but fell in love with a slab of the graphic stone while shopping. “When you see the right thing, it’s sort of serendipitous and you have to just go for it,” she insists. “It’s leathered, so it has this beautiful texture to it. It’s like a piece of art in our house.” 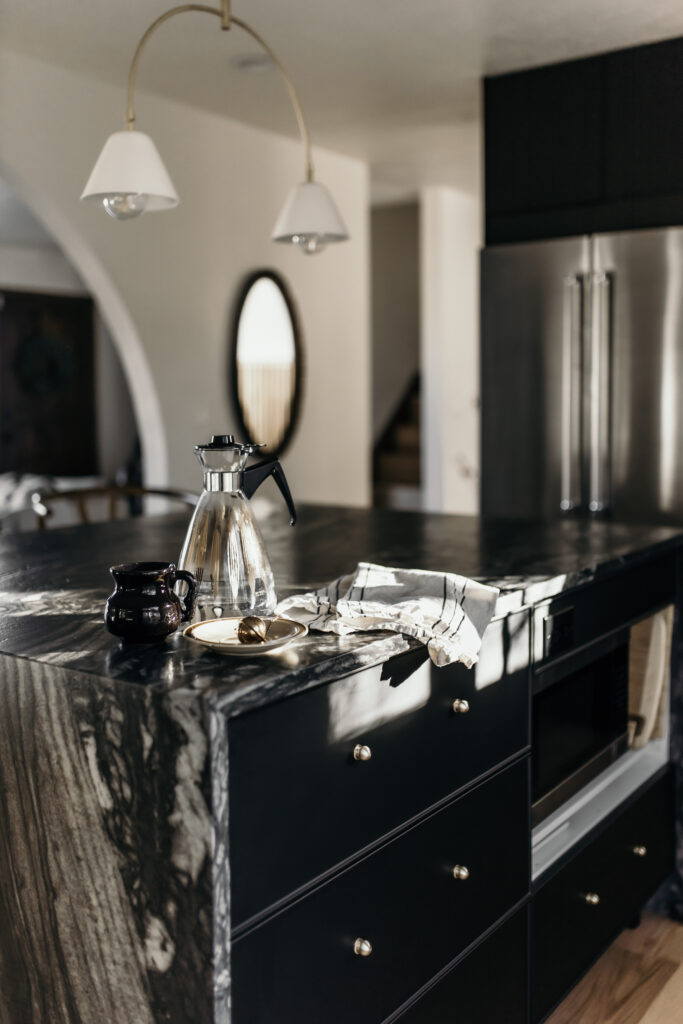 Many of Chavez’s design decisions were informed by the historical elements of the home. She chose hickory engineered hardwood floors to complement the retro mahogany trim, embraced the structural soffit above the sink with extra lighting, and even applied controversial stomp texture to new drywall to match the original. “Even if it’s not trendy or modern, it’s true to the style and time period of the house,” she reasons. 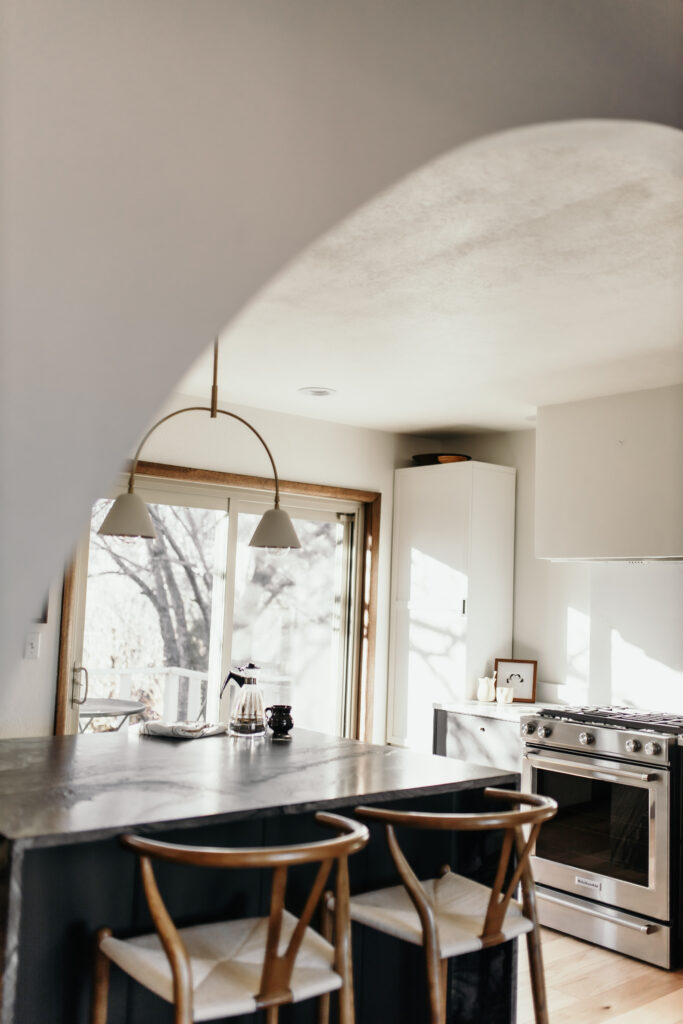 Chavez added even more character by mixing metals (stainless steel KitchenAid appliances juxtapose brass hardware) and hanging vintage artwork. “I like to save things that someone’s loved before and hopefully someone will love after us,” she muses. It’s clear the kitchen is all the more special for it.