Finding that ideal piece of storage that feels perfectly made (without breaking budget) can be difficult. This is where IKEA’s Besta units come in. The customizable cabinets make storage easy, plus “hacking” the design with Semihandmade fronts is a way to get an upscale look for any room in your home.

Whimsy in the Nursery

When it came to storage for designer Maggie Sciara’s children’s nursery, maintaining her personal aesethetic was important. She opted for Semihandmade’s Quarterline doors to accompany an IKEA Besta unit and adorned it with minimalist hardware. “My design style is the epitome of modern farmhouse, emphasis on modern. I think the Quarterline epitomizes that: a combination of traditional Shaker cabinets with a Bauhaus-like slim frame look. Perfection,” Sciara says.

Even though Sciara has some serious DIY skills and has built a number of pieces from scratch, brand new babies, only 22 months apart, made her rethink more legwork. “Using Semihandmade products in addition to some custom Etsy finds makes for a super easy and, more importantly, super quick project that doesn’t infringe upon the creative process,” she says.

Her biggest advice for other DIY’ers? “Always check Etsy for pulls, legs, whatever! There are tons of vendors out there who need our support,” she says. 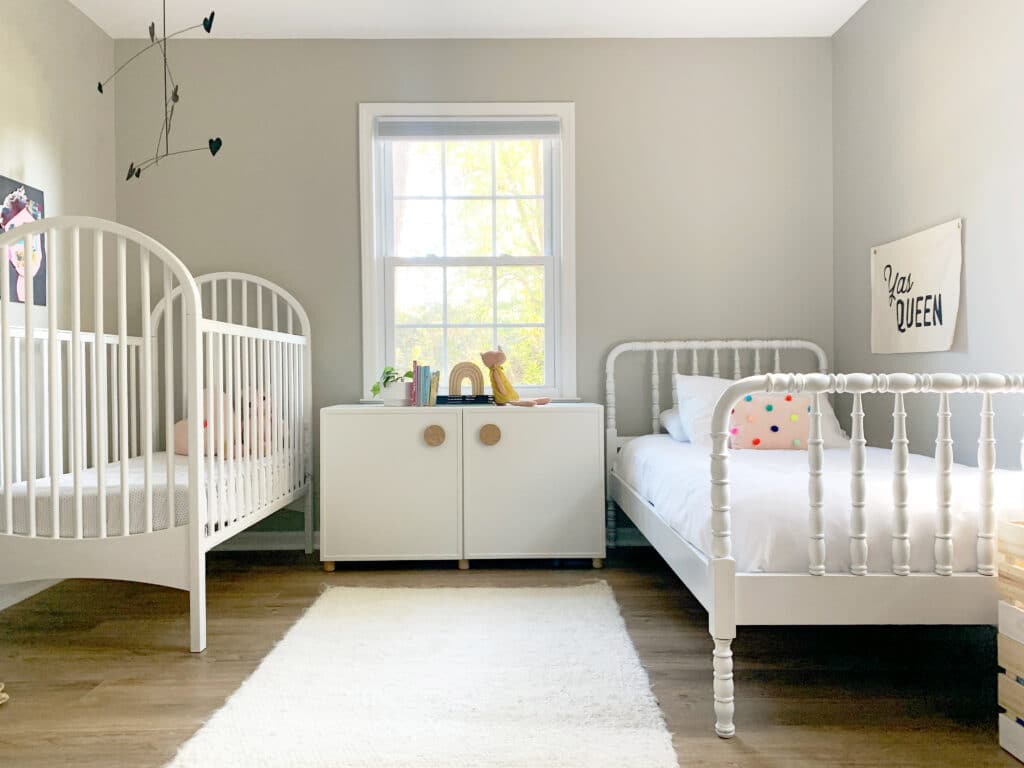 Double Duty as a Nook

DIY designer Angela Rose transformed a bedroom by turning a Besta cabinet into the ideal reading nook. She detailed the process on her blog, which included creating her own cushions (no sewing necessary!). The cabinet, which features Semihandmade’s Chris Loves Julia Cove doors, is adorned with CB2 hardware. 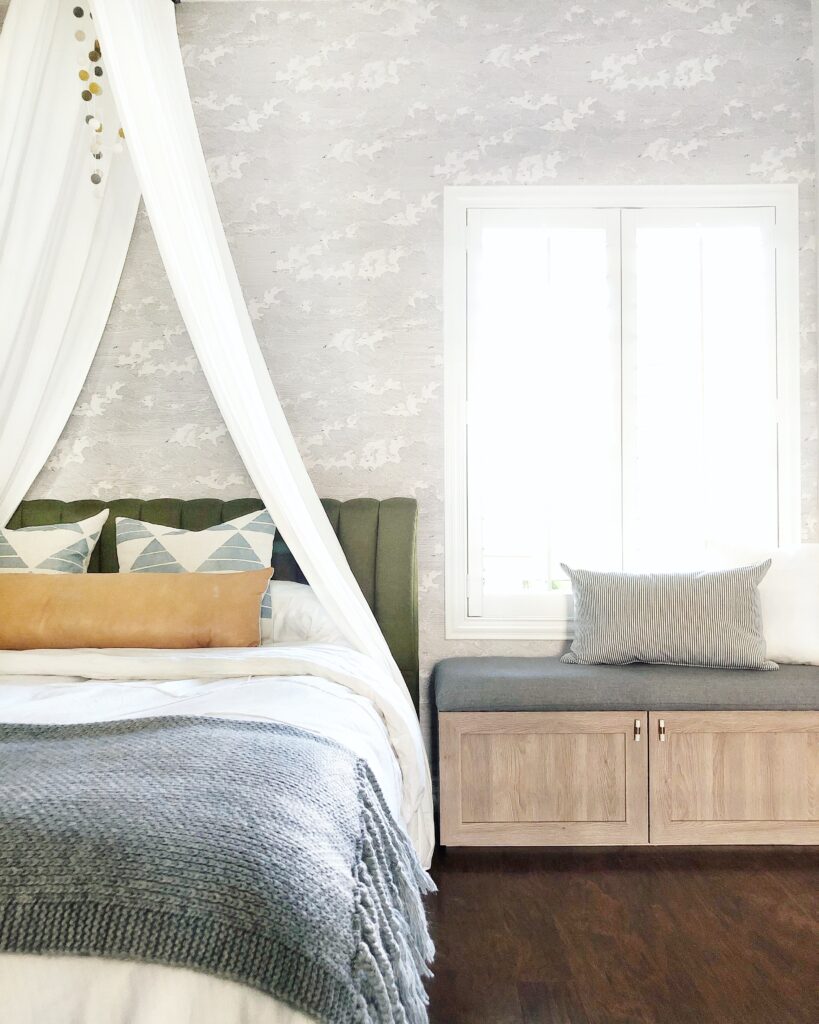 Photography and design by Angela Rose

An Anchor for Minimalist Shelving

On top of the built-in media cabinet, she included simple white shelves to display books and other items, adding dimensionality to the small area. 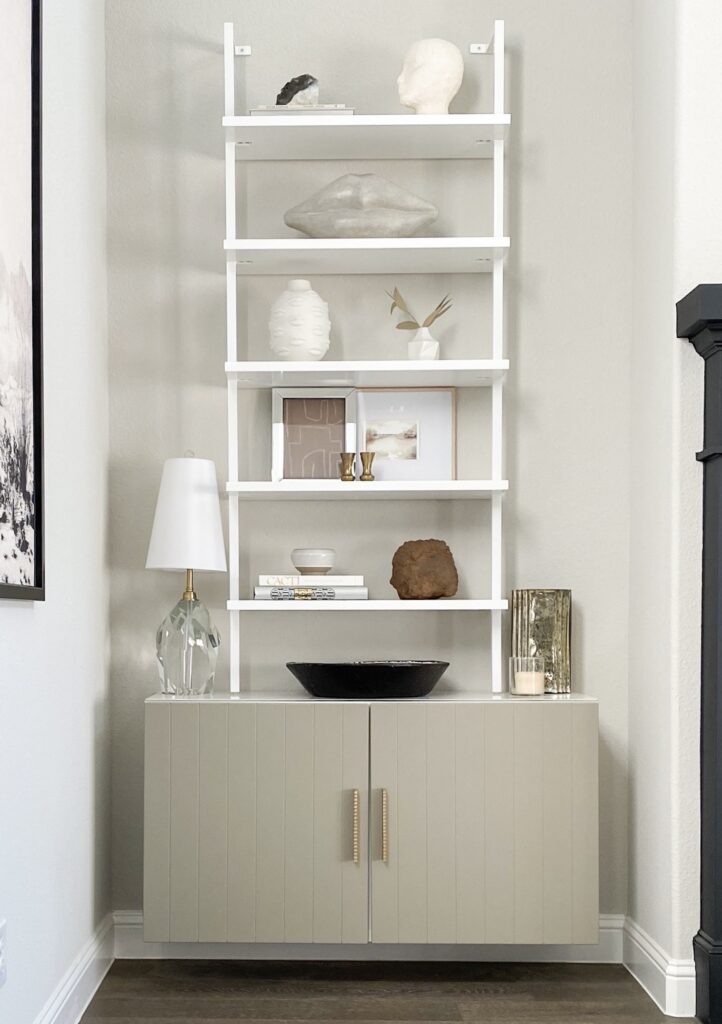 Design and Photography by Brooke Bundy

For Jennifer Easton, one of the biggest challenges was making over an awkard room in her home. “It’s a large entryway room and the front door opens right into it,” she says. “For years we struggled to fill it with furniture that made sense. It was a sad, forgotten place.” But, she had an “eureka moment.” “I realized that a four-door Besta cabinet fit perfectly in our space and would solve all of our storage woes,” she adds.

Once the Besta unit was installed with Semihandmade’s SSS Desert Gray Quarterline doors, the space was transformed. “The rest of the pieces started to fall together. Sometimes, you just need one foundational piece in a room, and then the path illuminates in front of you. Now this space is not only the place where we can store all kinds of things, from our bike locks in one cabinet to candlesticks in another, but also a lovely spot to sit and drink coffee, either alone or with friends passing through,” she says. 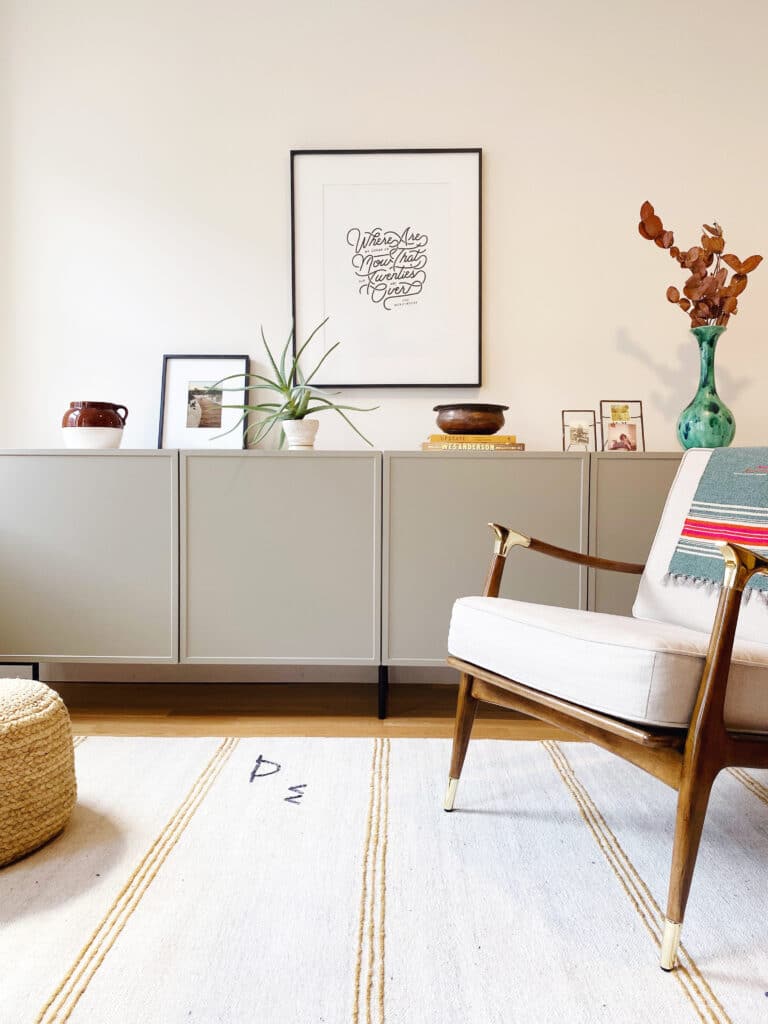 Design and Photograhy by Jennifer Easton

While IKEA’s Besta units start out as stark, it doesn’t mean the result should fall into the same category. Although there are beautiful ways to feature white or modern Besta variations, designer Lauren DeBello’s home office proves that the cabinet system works just as well in a warm-hued room.

For her office, she picked Semihandmade’s SSS Beaded fronts in black, which adds a bespoke touch to a chic office. 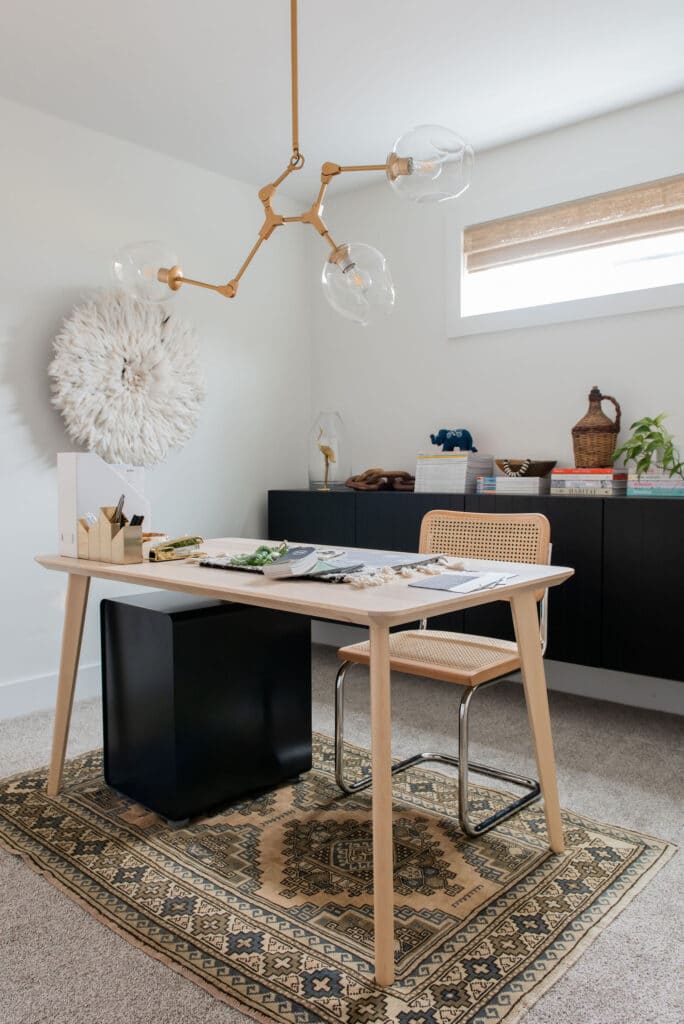 Design and Photography by Lauren Debello

Floor-to-ceiling cabinets are a great way to transform a space– and add a lot of storage. This design, which was done by ambitious DIY’ers Tyler and Kelsey Johnston, completely transformed the couple’s basement, and saved them thousands in the process. By mapping out the wall, measuring carefully, and adding suspension rails, they were able to create a built-in media center using Semihandmade. 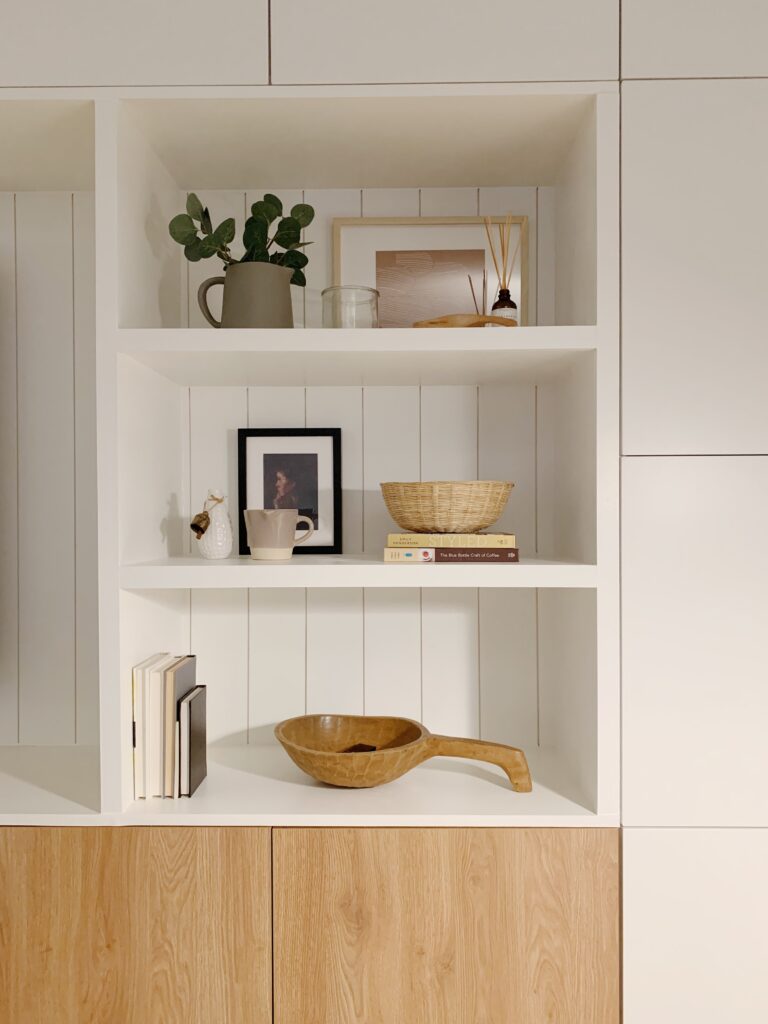 Design and Photography by My Simply Simple

For any other designer, pulling off a Scandi/modern farmhouse design would be quite the feat, but for Velinda Hellen, minimalism with a “vintage heart” is her modus operandi. For this Los Angeles home, the farmhouse vibes were birthed via vaulted ceiling with exposed beams and by adorning the room with a myriad of vintage-inspired finds. Therefore, she aimed to build a simple media center with Semihandmade’s DIY Slab doors in White Picket Fence by Dunn Edwards to complement the rest of the design. 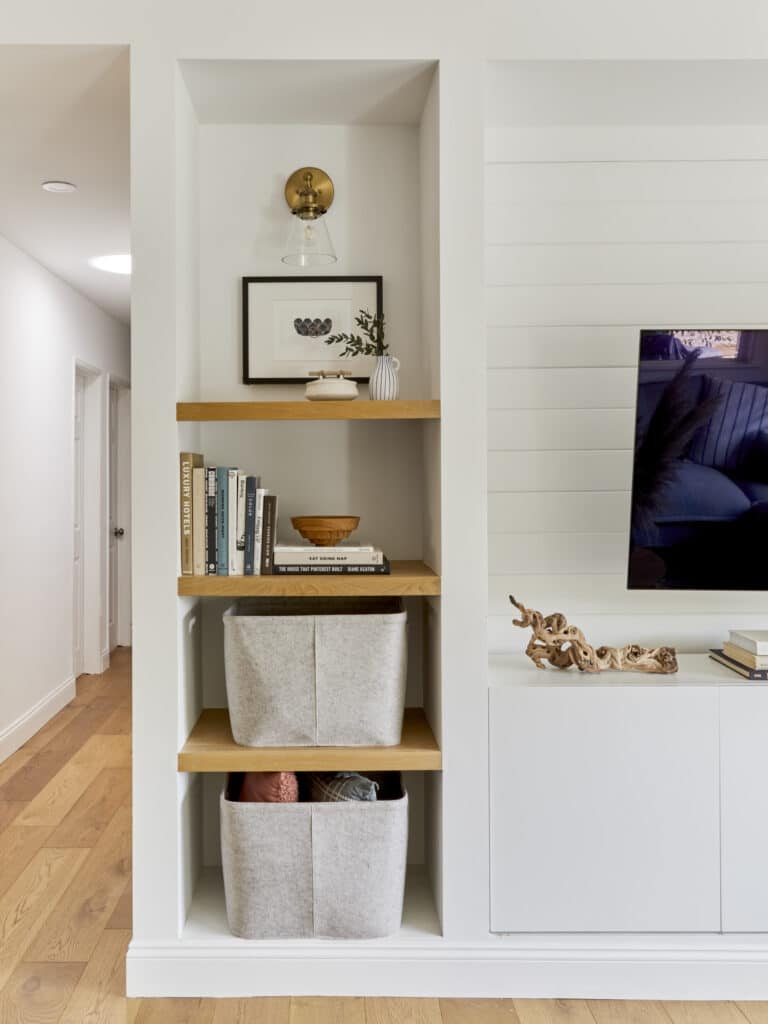 Did you know there is a type of food you should never cook in your cast-iron pan? What are the best kitchen drawer organizers? How do you actually get a grill sparkling clean? These are the types of kitchen organization and cleaning questions we look to answer here. Every month, we tap professional organizers, top chefs, and healthy home experts to share their top tips on how to organize kitchen cabinets, the best ways to store spices, and what you should actually look for when shopping for cookware (spoiler: Teflon is a big material to avoid, no matter how easy it makes scraping scrambled eggs off a pan). Over the last year, we’ve picked the brains of fan-favorites like Clea Shearer and Joanna Teplin of the Home Edit and Masterchef star Hetal Vasavada, but we also called on our own design community. Blogger Kelin Zhao, for instance, showed us how to organize a small kitchen and shared her top IKEA kitchen cabinet organizers with us (she even gave us a trick for making your own pull-out trash bin). There’s more to an organized kitchen than its cabinets, too. We explore everything from pantries to kitchen island and appliance garages so that no area of your home is left messy or dirty. Stick around as we share our best cleaning tricks and most creative bathroom, pantry, laundry room, and kitchen organization ideas.