Erin Brown is an Orange County-based interior designer who has a knack for crafting luxe spaces. While she says her style could be described as California cool and modern eclectic, she works with an array of client aesthetics, whether they be traditional or even minimalist, to yield something beautiful, streamlined, and functional. 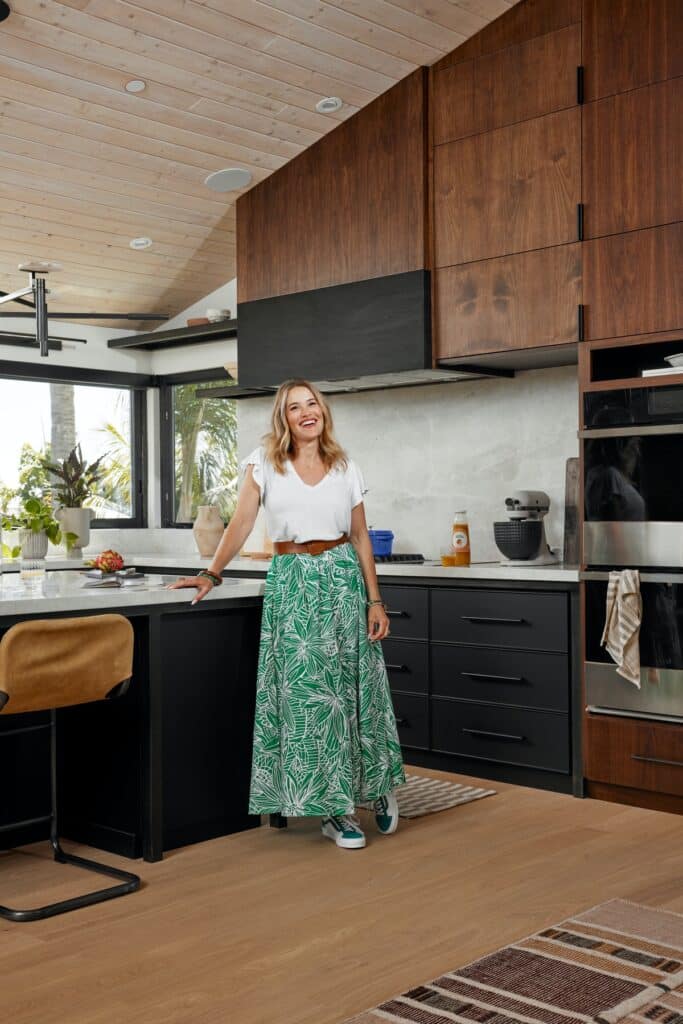 For her own San Clemente home, she was in for an intense two-year renovation, taking the entirety of her 1950s bungalow down to the studs. “It got a really bad 1990s remodel. It was pretty gnarly,” says the designer. “We wanted to strip it down to the essentials.” Today, Brown’s kitchen is the chic, storage-filled space of her dreams. Get her five best kitchen renovation tips below. 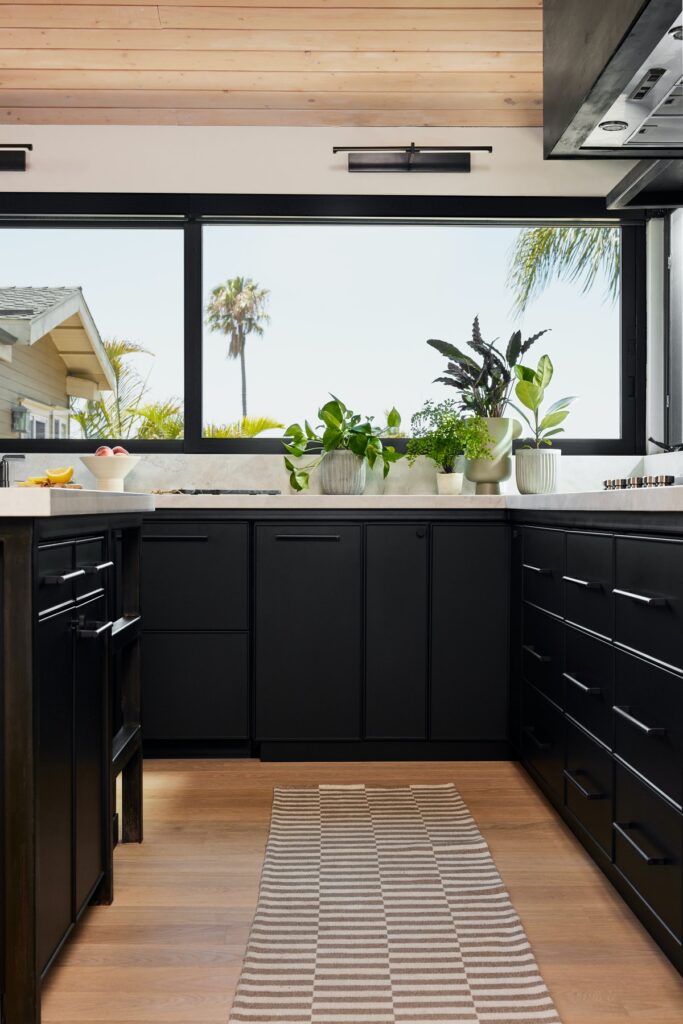 Brown purchased the home in 2019 and began demolition in 2020. While COVID caused difficult delays, one of the most unexpected changes was the location of the kitchen. Initially, the floor plan called for the kitchen on the first floor and primary bedroom on the second, which happened to feature an ocean view.

“Six months into the remodel, we flipped the floor plan,” she says. “I thought it was a waste of an ocean view because how often do you sit in the bedroom and stare out the window?” Plus, centering the kitchen around it was an ideal way to bring people together.

Be Honest With Materials 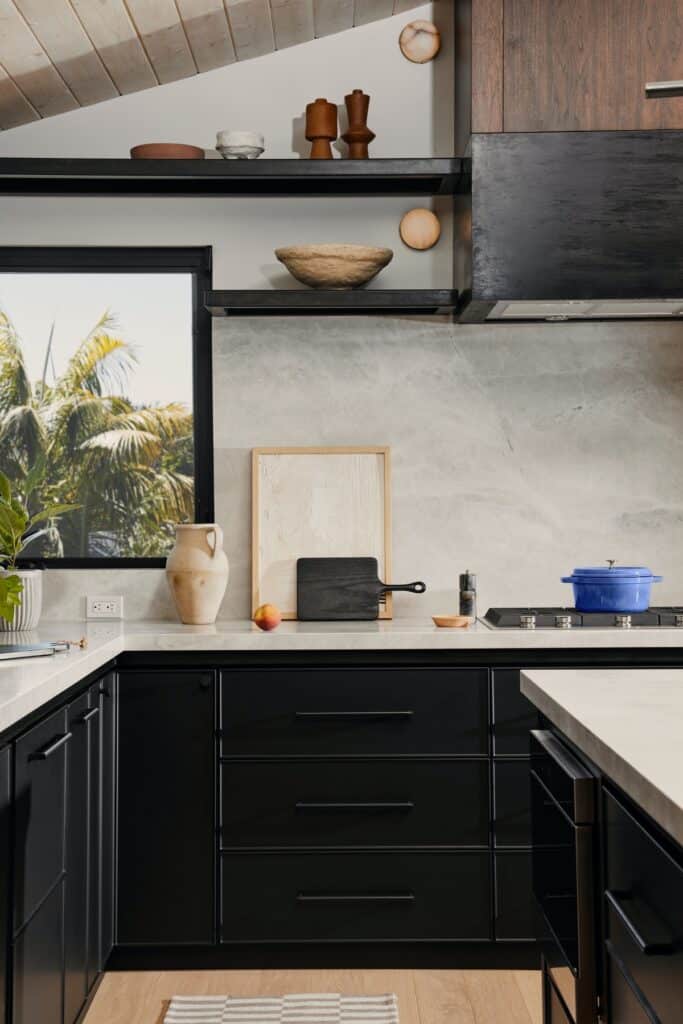 In addition to making beautiful, streamlined, and functional design a priority, Brown’s other major tenet includes being honest with materiality. “We made the most of where we were and what was around us,” she says of her kitchen renovation. “That’s an important thing to me, using the space well and [being respectful] of the environment. I would never do a farmhouse kitchen in a home with modern architecture,” she notes.

For her kitchen, she cleverly used steel casework to build a border, a trick that will make it simple to swap cabinets in and out without ripping up the floors. “That is our five- to 10-year plan,” she notes. The patinaed steel hood is also a nod to the steel elsewhere in the kitchen, including the JennAir steel appliances and Brizo steel faucets and soap dispenser. 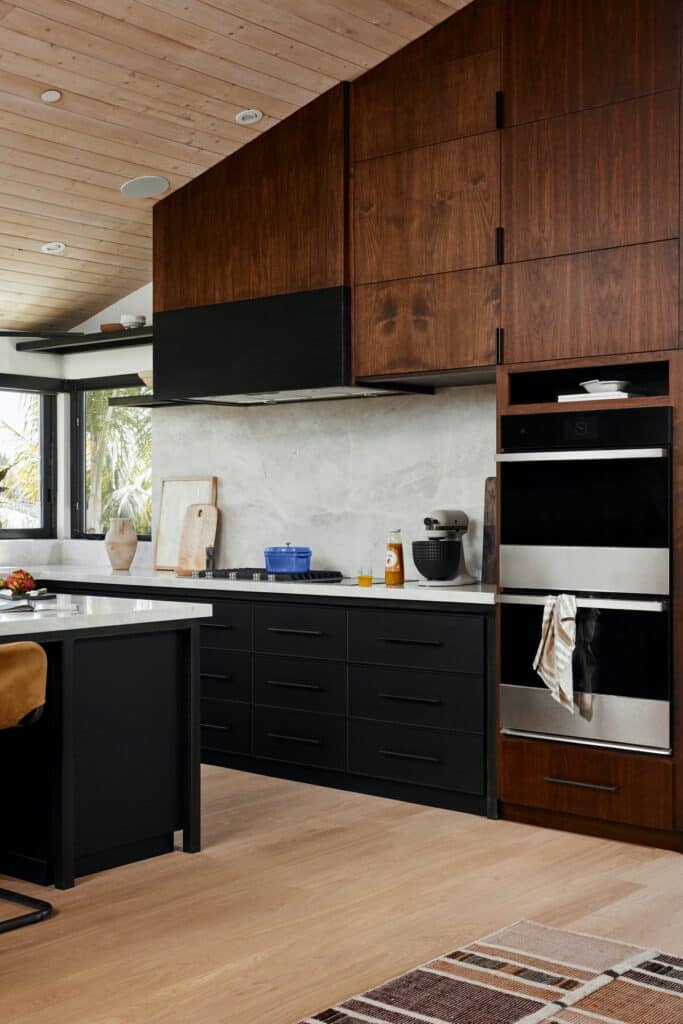 BOXI cabinetry was a lifesaver after her initial cabinetry lead time went from eight to 24 weeks. “I was having a heart attack thinking about all of the trades I had lined up,” she says.

In lieu of feeling stressed, Brown went to BOXI and received her cabinetry very quickly. “My experience was incredible,” she says. “BOXI feels like a more fleshed-out version of Semihandmade.” And while the designer expected to do the brunt of the work, BOXI held her hand through the whole process, including assisting with space planning. “They made it incredibly easy and efficient,” she adds.

Two-Tone Can Be Subtle 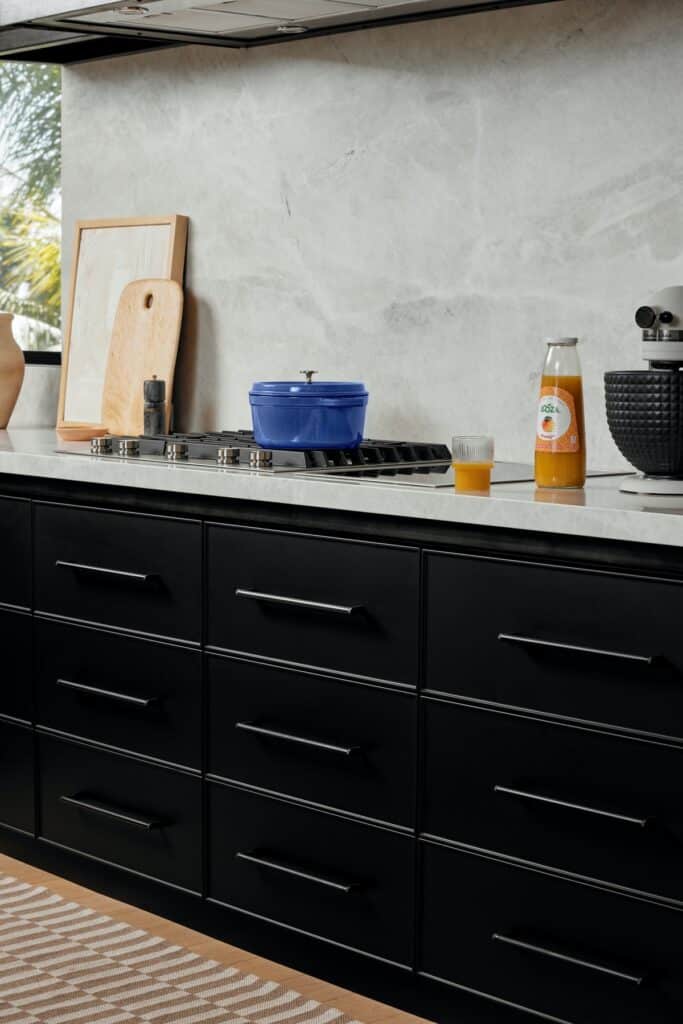 Peppercorn Edge “hit all the design notes” Brown was looking for. “I loved the lines and the sheen of it. “It’s not completely matte yet has a really nice luster to it,” she says. Plus, the cabinets are a modern departure of a traditional Shaker style.

Black was also the right color choice for the kitchen. Brown loves “design with healthy tension.” The dark wood and black cabinets pair with the light wood floors, a sophisticated, neutral play on the trendy two-tone kitchen.

The cabinets are finished with Rejuvenation’s West Slope Drawer Pulls and West Slope Cabinet Knobs, while Circa Lighting fixtures light up the room. 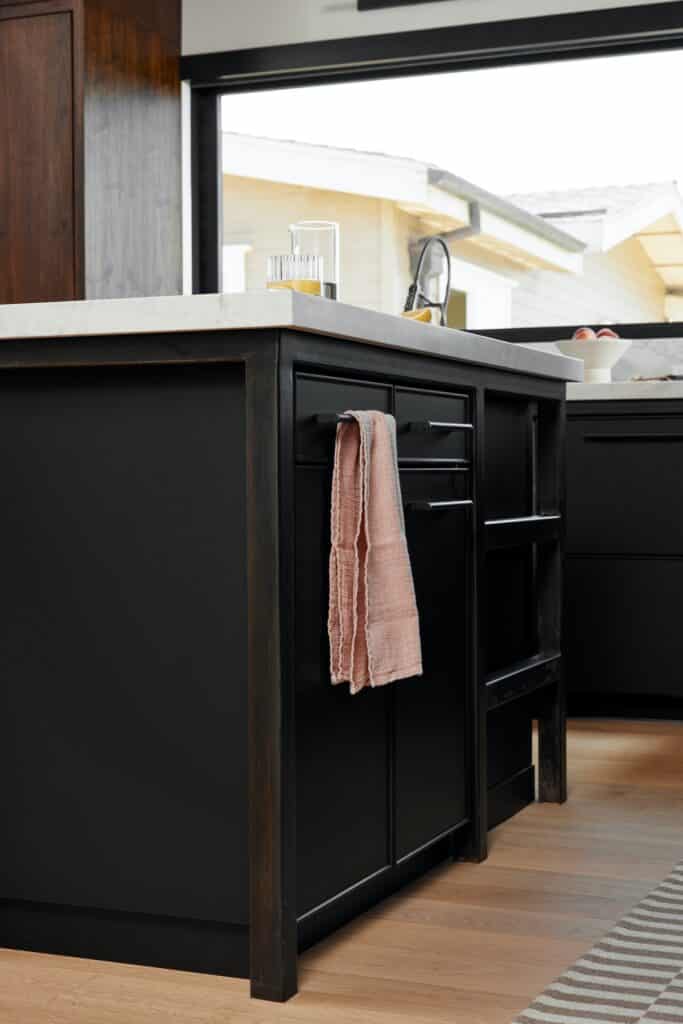 In addition to the design, Brown adores her kitchen for all of the storage. “Part of the reason why I chose BOXI was for the generous drawer size,” she says. “Drawers in the kitchen are both a luxury and a necessity. All of my lowers, except for a corner cabinet and trash cabinets, are drawers.”

When it came to maximizing storage and nixing the clutter, she looked to a professional organizer, Coastal Organizer Company, something she’d highly recommend to anyone. A six-inch corner cabinet has now been transformed into a barbecue station. In the corner caddy, the organizer stored small countertop appliances, including the panini press and waffle iron. “That’s now one of the most productive corners in our house,” she says.