Architect Sarah Snouffer expertly transforms old properties into dream homes for her clients, but renovating the ramshackle kitchen in her own 1925 Washington D.C. row house was tougher than she expected.

“I thought I had it all planned out,” the Third Street Architecture founder admits. “I spend every workday making decisions for my clients. I’m designing kitchens often, so I thought I was going to make all these choices as quickly as possible. But you fall into that decision paralysis when it’s your own project.”

Eventually, Snouffer was able to overcome the indecisiveness by looking to the history of the 97-year-old abode for guidance. Each material, color, and texture she selected is intended to mingle harmoniously with remaining original elements like chestnut trim, transoms, exposed brick, and white oak flooring.

Snouffer also sought to modernize the space, which was last updated in the 1980s. She swapped retro finishes like peach paint, green shag carpet, and grease-caked, hardware store cabinets for timeless picks that straddle the line between contemporary and traditional. The result is a warm, neutral kitchen that works with the historical architecture yet still feels current.

Opening Up the Main Level 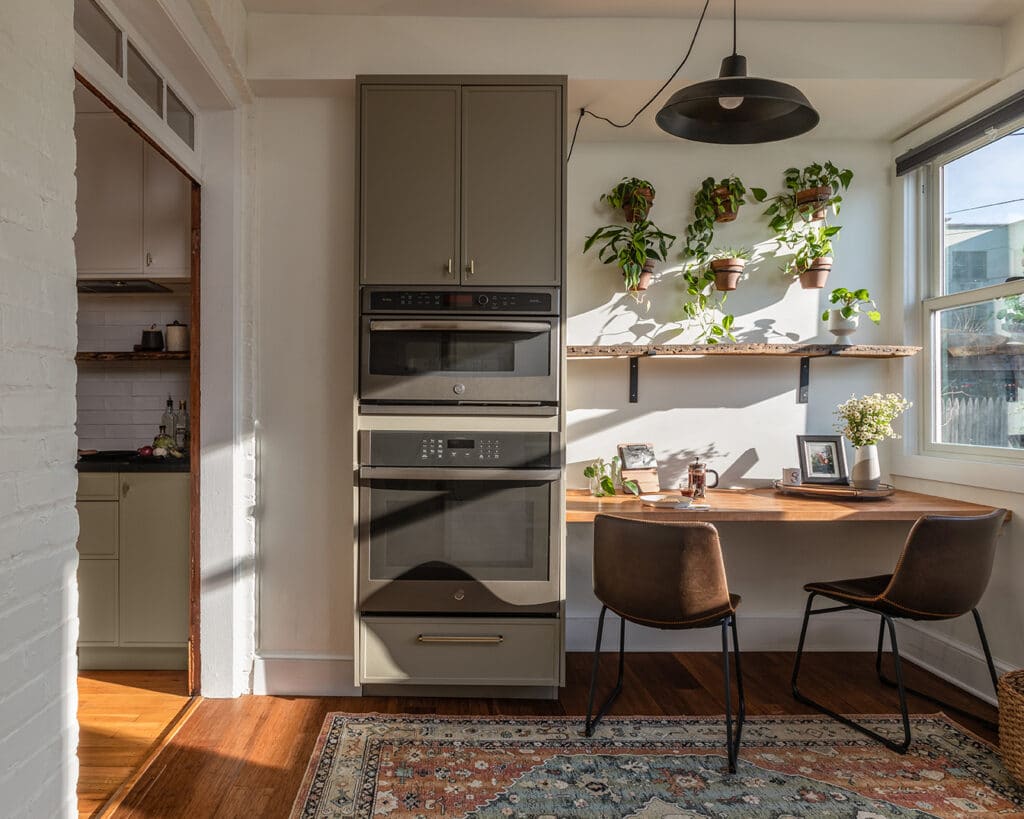 Before Snouffer could address her aesthetic goals, she had to achieve a functional floor plan. She relocated the kitchen to the opposite side of the house to maximize storage, knocked down a major dividing wall to integrate the dining area, and incorporated the sleeping porch into the interior to make room for an oven, microwave, and remote work desk. 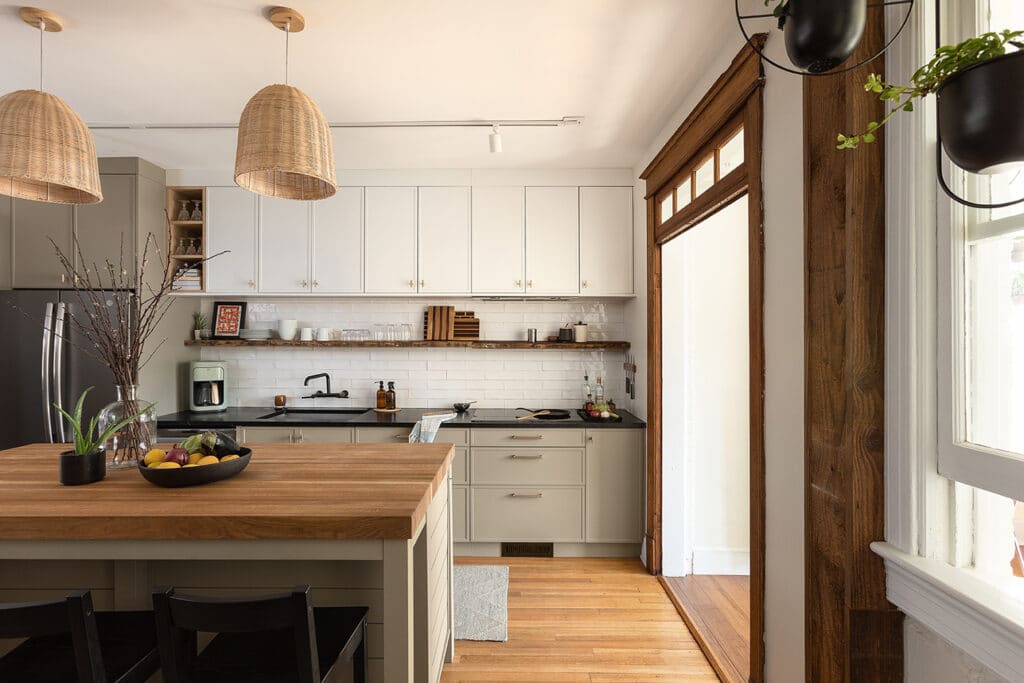 Snouffer paired the new, airy layout with cabinetry that’s intentionally transitional. “We tried to honor the timeframe that the house was built in, but also do something a little bit more modern, so that’s where the Semihandmade SSS Quarterline fronts came into play,” she says. “We wanted a profile, but not something as traditional as a Shaker. This is a modern take on the Shaker.”

For the top cupboards and pantry, Snouffer went with white doors that bounce light around the room and blend in with the imperfect ceramic tile backsplash. She opted for the sage-like Desert Grey Quarterline doors on the lower cabinets, built-in bench, and island, which her father crafted to act as a furniture piece that stands up off the ground. “It doesn’t feel as heavy that way,” she explains. 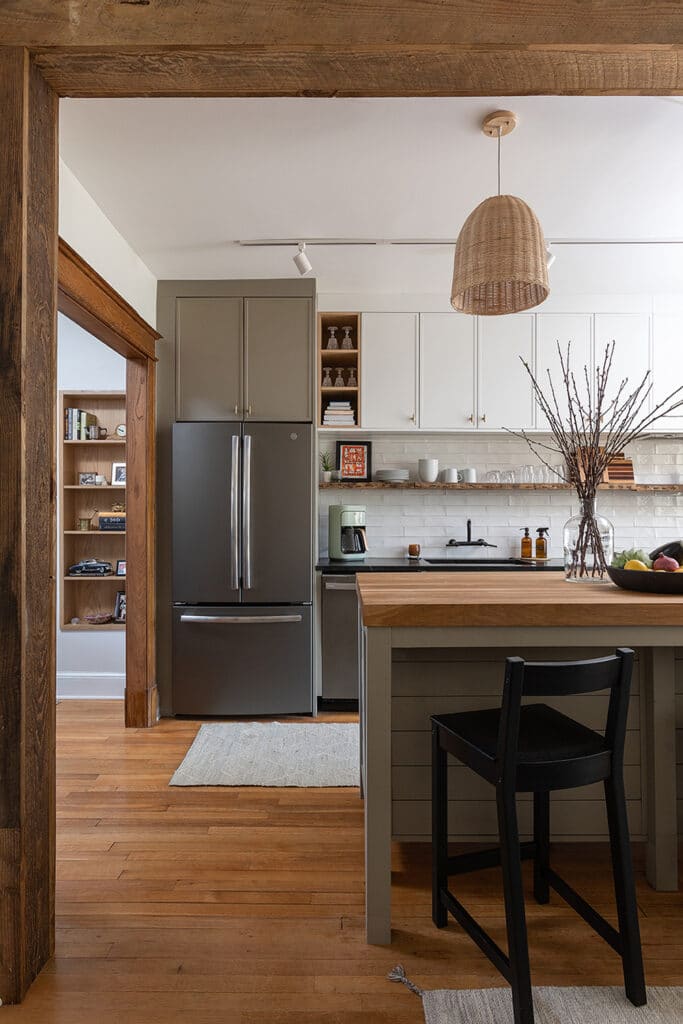 To ensure the kitchen would develop plenty of character, Snouffer installed butcher block and soapstone countertops. “With both materials, you really have to genuinely be okay with them looking lived-in,” she shares. “Soapstone is a softer stone, so you will see scratches on the velvety smooth honed surface. Butcher block brings in a lot of warmth. If it gets too beat up, I just sand it down.” 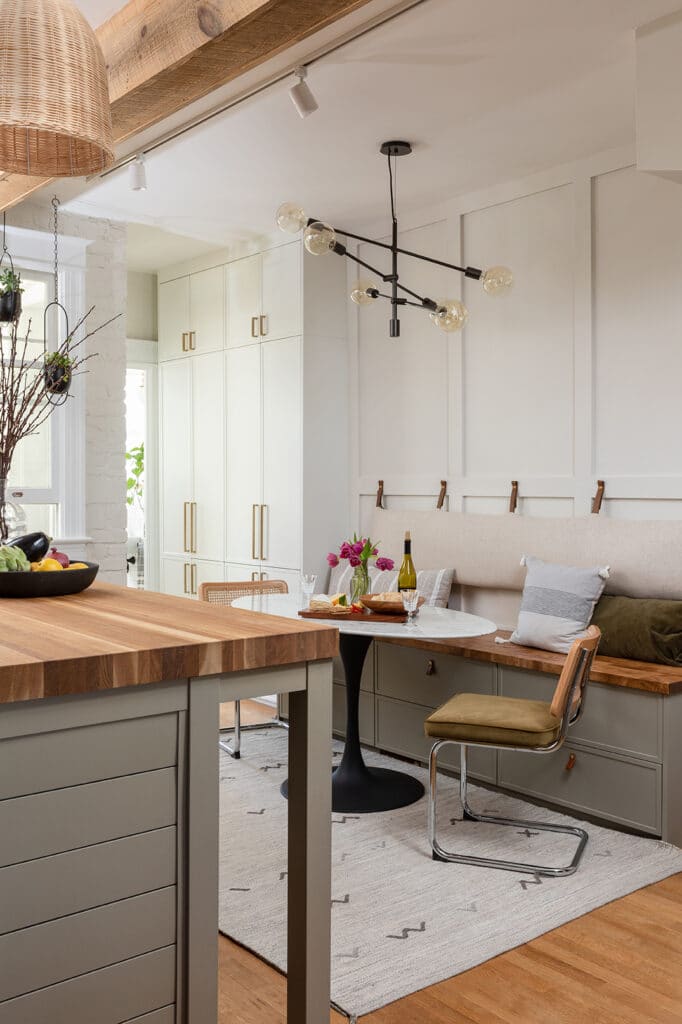 The floating shelves made from original joists, Summer Street brass hardware, and wicker pendants add personality to the place, as well. “A signature thing that I do often in projects is layering textures,” reveals Snouffer. “It just brings another level of thought to the space. It’s also an opportunity to make it feel more welcoming.” Of course, her kitchen is as inviting as any.