Would you take on a renovation without a general contractor? Brandi Russell did just that with Grover’s Lodge, a three-bedroom, three-bathroom rental named for her late father. She completed the two-year project in the midst of the pandemic, and while it was quite the challenge, she is thrilled with the outcome.

Russell works in the hospitality consulting industry, so designing beautiful and practical spaces is her speciality. “I work in hotels, so this is my world,” she says. And while she has completed home projects in the past, this was by far her most daunting undertaking. Learn how she pulled it off. 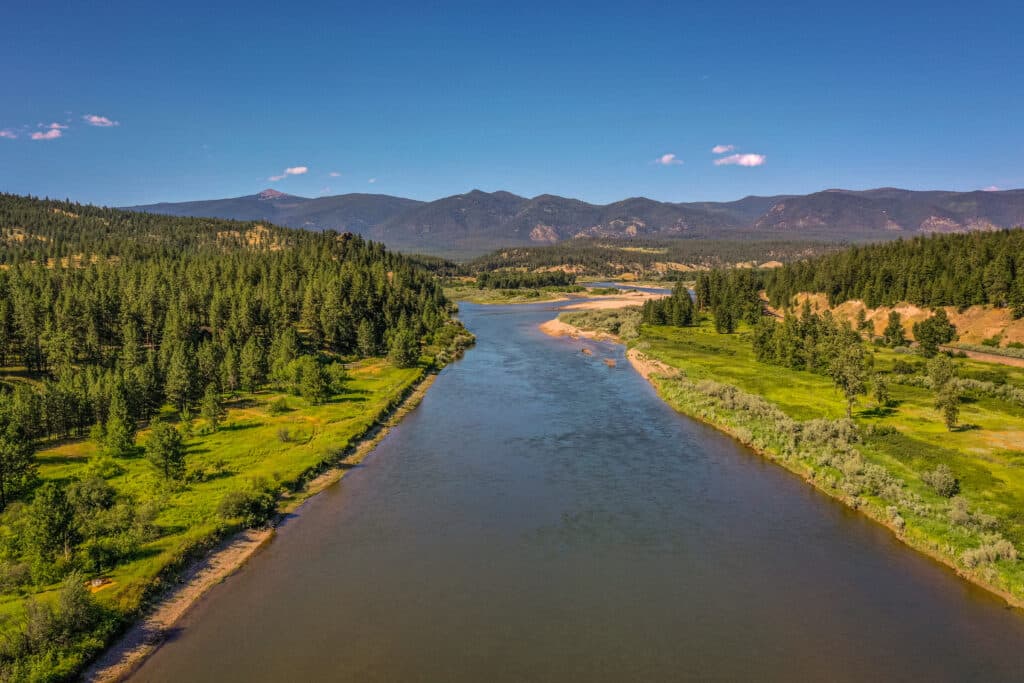 The home, which was built in 1979, is located 25 minutes from Missoula, Montana, on five acres and overlooks the Clark Fork River. It was well-maintained yet outdated as only minor cosmetic updates had been made, and Russell planned a dramatic makeover focused on intentional gathering spaces and sophisticated design.

In addition to taking on much of the project herself, the plan was unlike anything Montana contractors had seen before. “I’m one of the first people here to use Semihandmade,” she says. “There were no installers who knew how to do it. It was a big undertaking versus being in California or a major market.” Plus, the closest IKEA is an 8-hour drive. 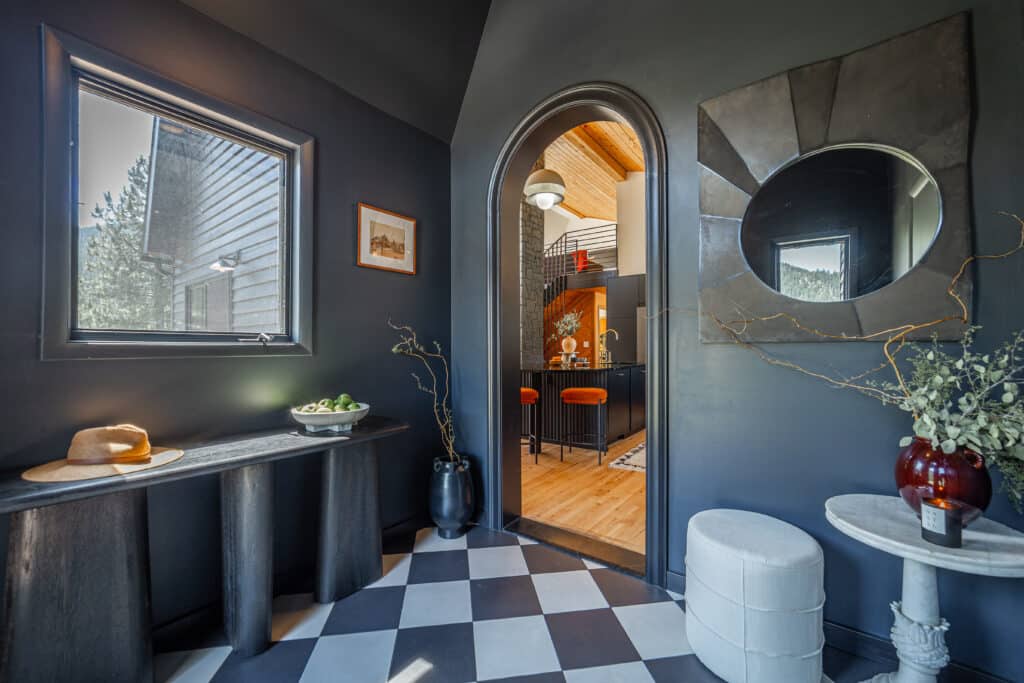 The original kitchen felt like one in a corporate office. There was no entry vestibule, the front door hit the upper kitchen cabinets, and there wasn’t an island, plus the basic wooden fronts left a lot to the imagination. Russell desired something higher-end that would still complement the home’s architecture and location.

“I had heard of Semihandmade from following designers on Instagram,” she says. “I used to live in Palm Springs and knew of the showroom there.” Initially, she had chosen Semihandmade as a cost-effective choice, however, the renovation cost the same as custom due to the cost of labor.

Russell first consulted a kitchen designer in Missoula but was uninspired by her plan. “She went through everything I wanted, and I then took those drawings to the IKEA kitchen planner,” she says. 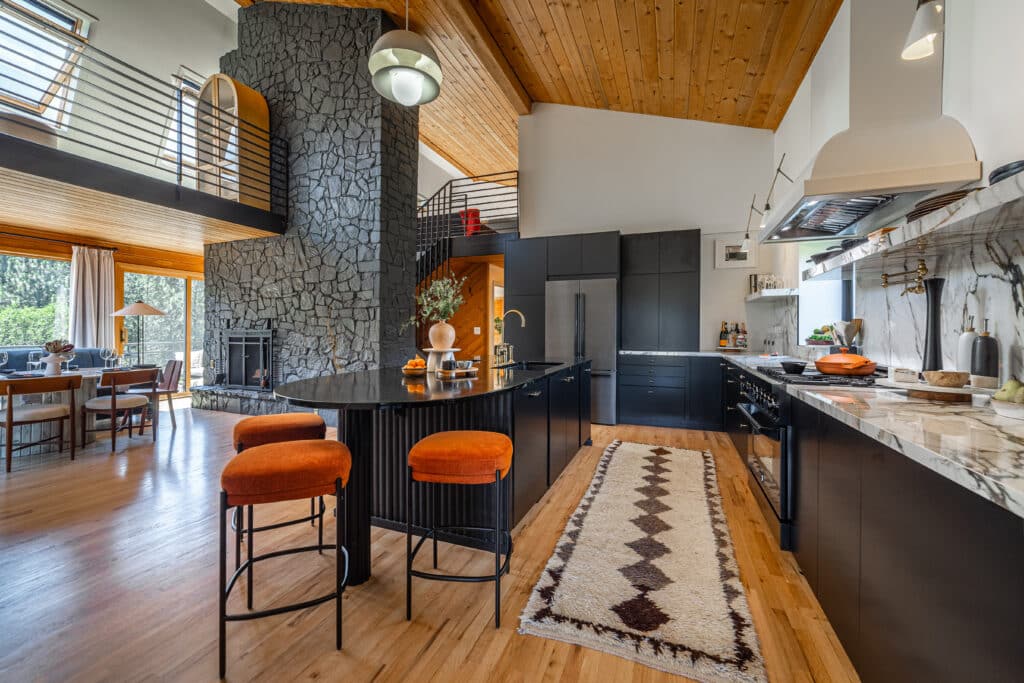 She chose black cabinets with a custom-designed hood and two different countertop materials. “I wanted to keep it modern, but not too dark,” she says.

A true labor of love, Russell also broke typical design rules with Neolith counters, and was the first person to use them in Montana. “It was quite the project of bringing new things into the market,” she says. The Neolith counters with terracotta veining juxtapose the custom soapstone oval island and soapstone sink. 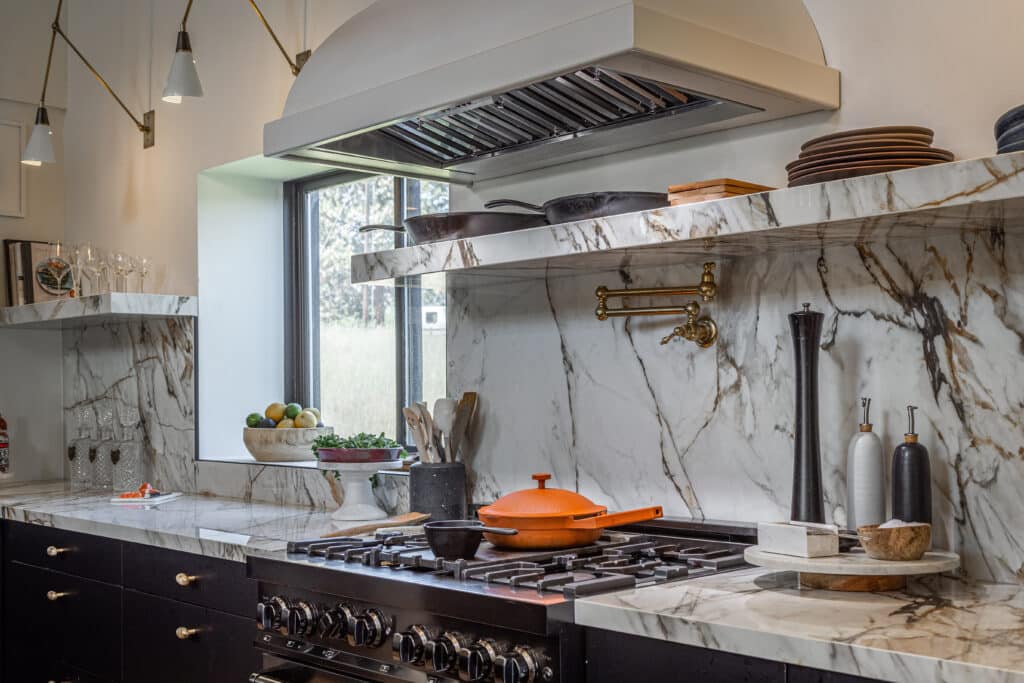 To make the kitchen ideal for entertaining, Russell chose an oval-shaped island with custom fluting on the end and cabinets for storage. “I love that I could do that with Semihandamde since I knew I didn’t want uppers,” she says. “We also used a floating shelf to maximize storage.”

While Russell drove to IKEA in Seattle to place her order in-person, she also made multiple trips to Spokane to look at soapstone slabs and used the leftover stone for a vanity. 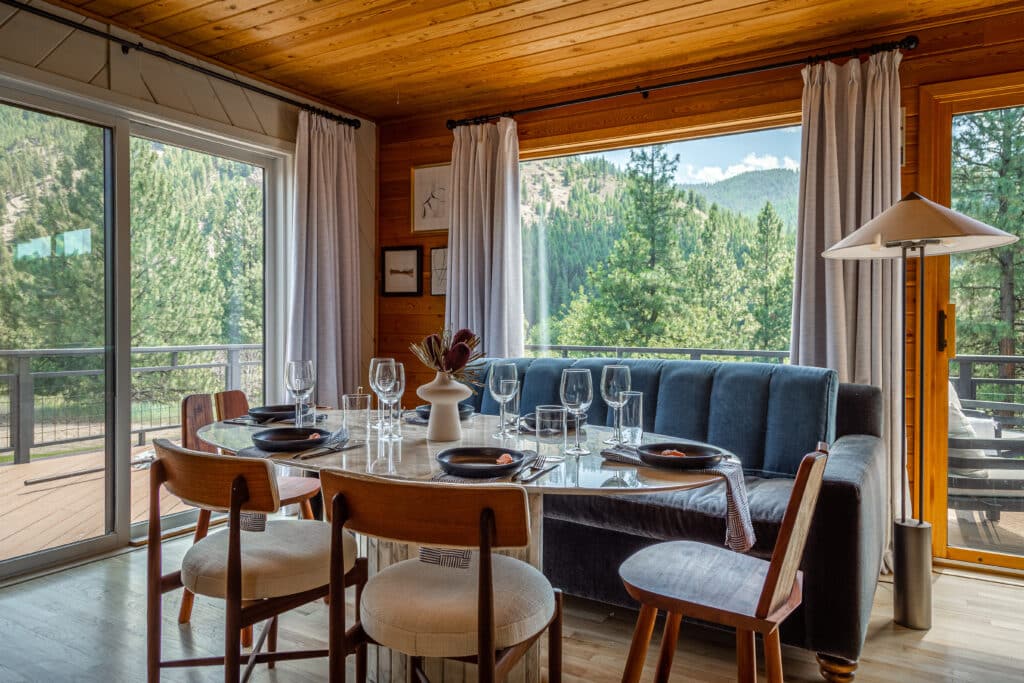 When it came to the rest of the first floor, she sourced a 1960s marble dining table from a vintage store in Denver, along with books, vases, and other details. “I wanted to make the kitchen and dining room intertwined. It’s for entertaining, eating, and spending time with people you love,” she says. After a long two years, the home is now complete and on the market. 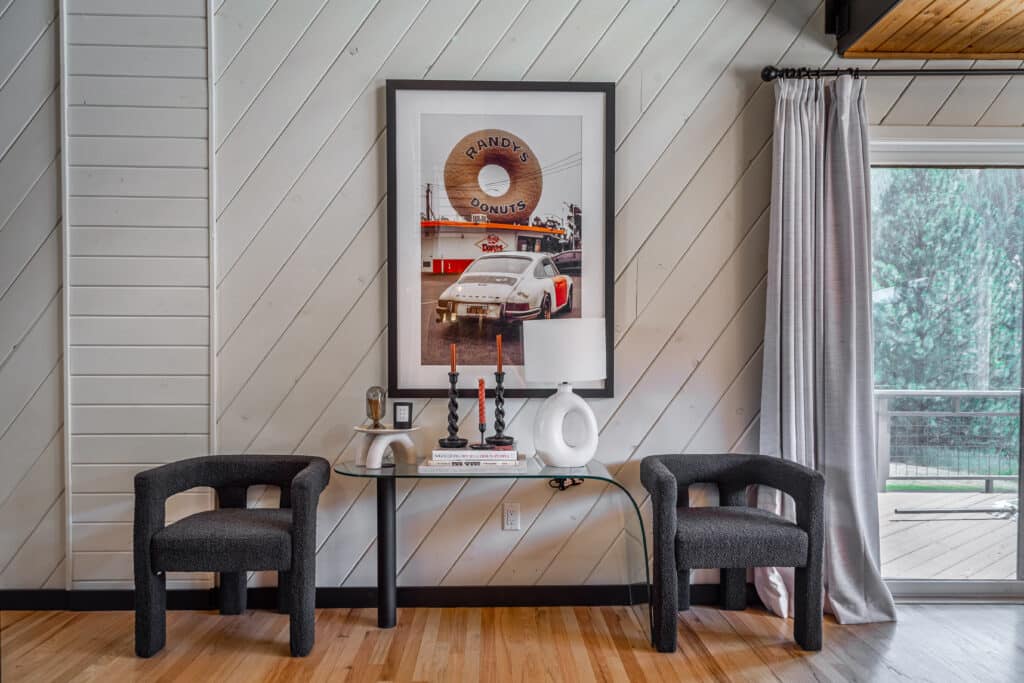 For those beginning their own project, she cautions to think of the larger picture rather than working around individual items, as well as finding the right team.

“I didn’t have issues with design but with labor,” she says.” My range wasn’t converted property to propane and nearly blew up the house. If I had the right general contractor, we would have finished the whole house quicker.” 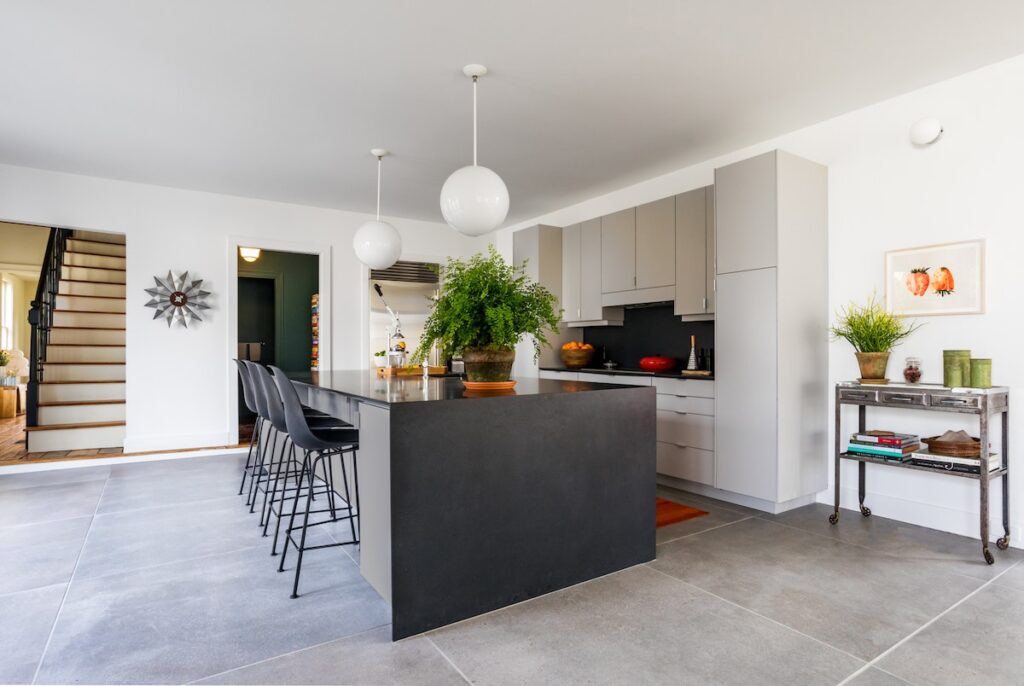 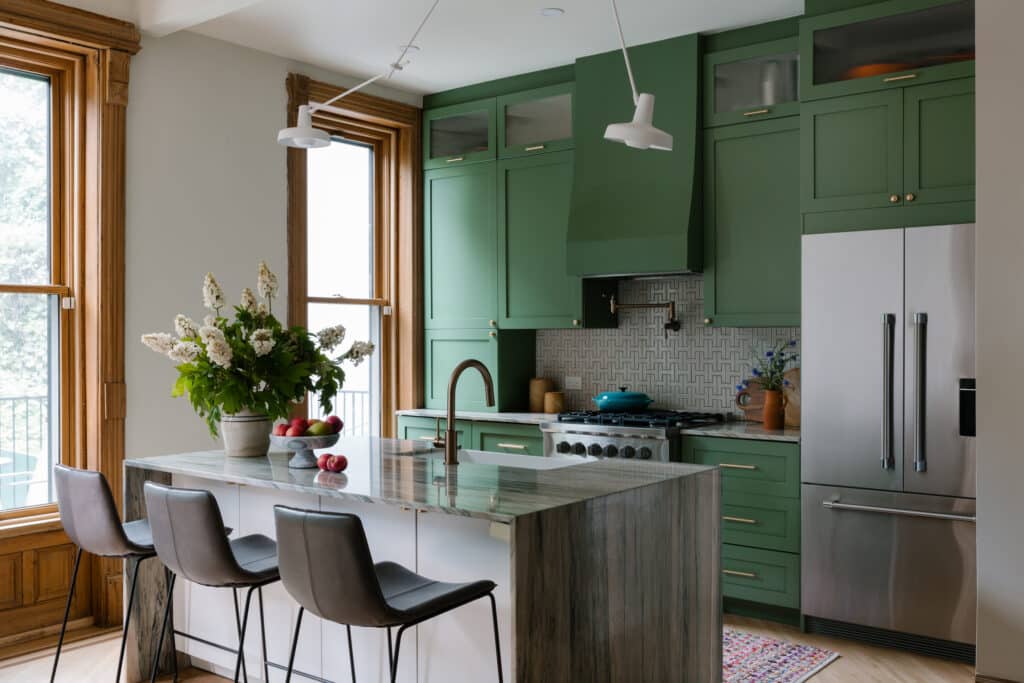 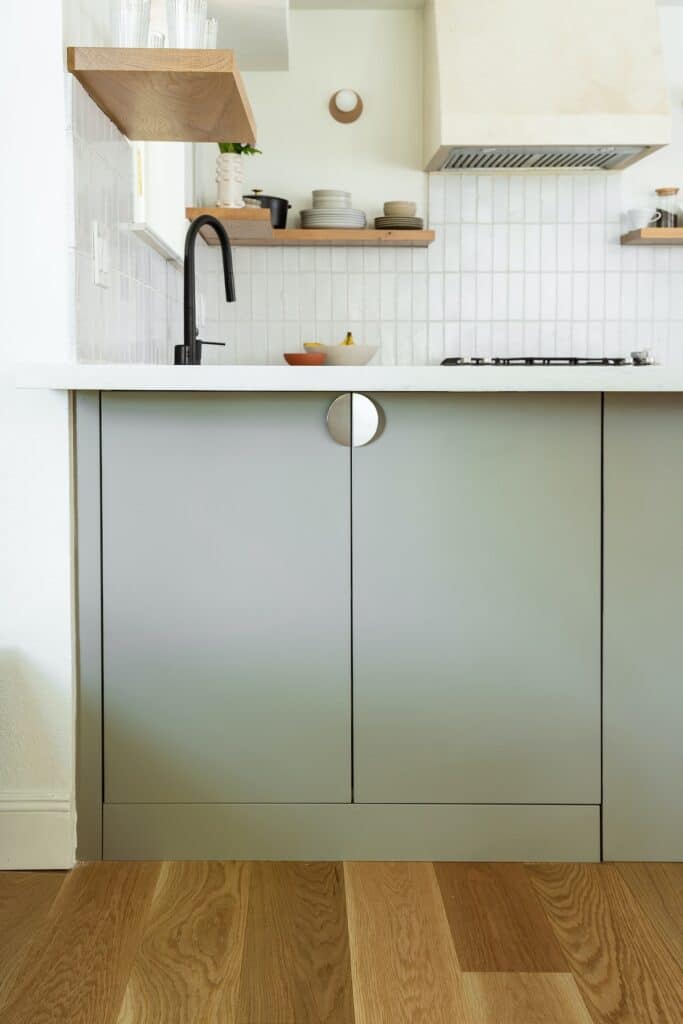