Looking to elevate your kitchen design? Try a waterfall edge countertop. The sophisticated style will not only add drama to any space, but is timeless. Waterfall furniture, characterized by its rounded edges, was first seen in the 1930s and 1940s and is the most distinctive style of the Art Deco period. Now, nearly 100 years later, it’s made its way into kitchens and has become a homeowner favorite. Tour four BOXI spaces that showcase the look. 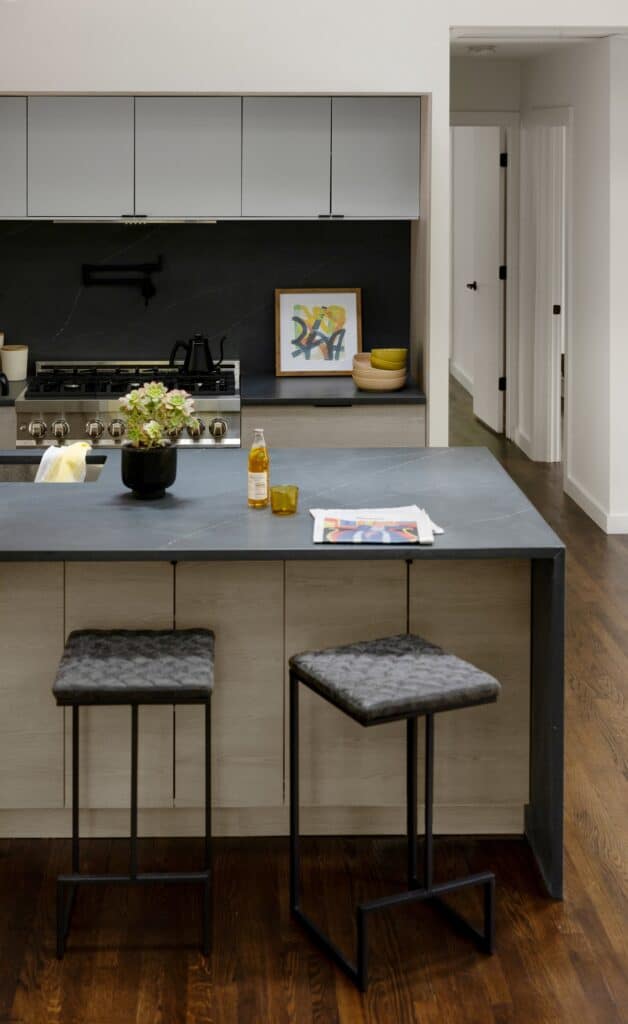 Designers Mohsin and Maha Sheikh carefully renovated a 1955 Virginia home, keeping its midcentury roots but enhancing its natural charm. The pair wouldn’t call themselves flippers, rather thoughtful remodelers, as they have purchased “older houses and leveraged unique products,” Moshin says.

This home, located in Lake Bancroft, a neighborhood started by Bauhaus founder Walter Gropius, includes a two-tone kitchen with BOXI’s Mushroom Slab and Rye Slab cabinets and a stunning 10-foot soapstone island. “We were lucky to get one full slab,” Maha remarks. The waterfall island complements the rest of the kitchen’s cozy hues, while the stone is also featured in the basement wet bar. 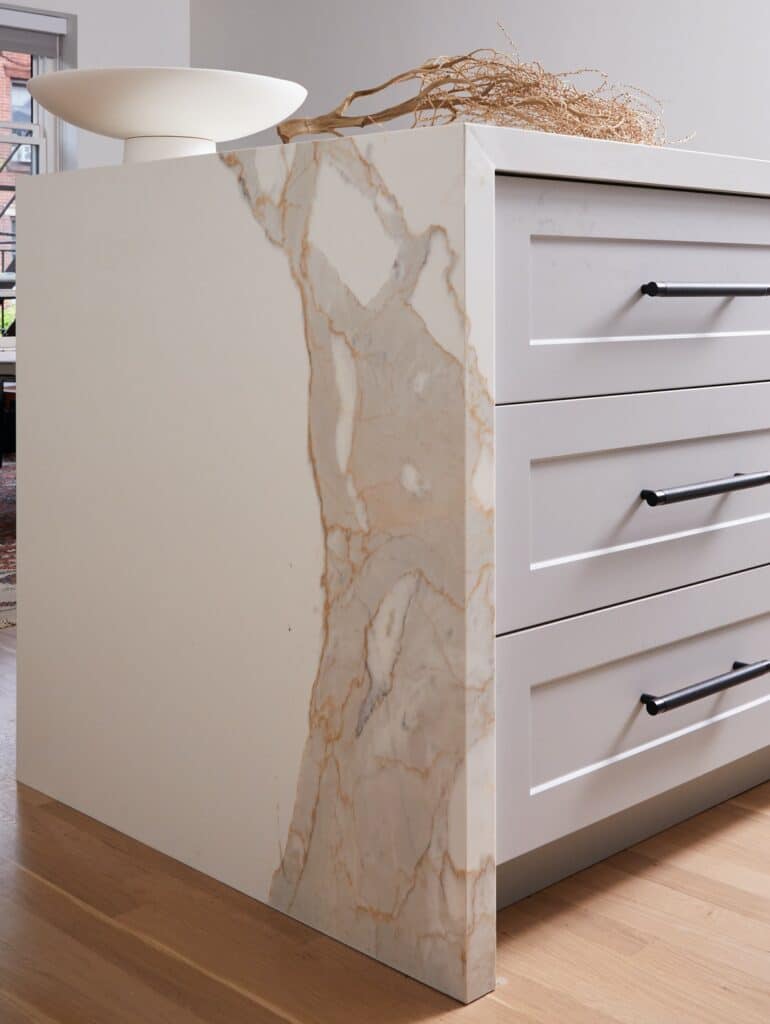 Actress Kim Raver is constantly on the move, spending most of her time filming, but the native New Yorker wanted to stay connected to her roots. Thus, she recently purchased a Manhattan home, and redesigned it to match its surroundings. The pre-war apartment is “quintessential New York,” she says. It has an industrial feel with exposed brick, BOXI Mushroom Shaker cabinetry, which she loves for its calming effect, black Schoolhouse Electric pulls, and chic surfaces.

For the countertops and backsplash, Raver wanted something dramatic yet highly durable. When she discovered Laminam, she knew it would be perfect. “I wanted the look of marble, but I needed something that was more durable,” she says. “It’s still smooth and has that waterfall effect on one side.” 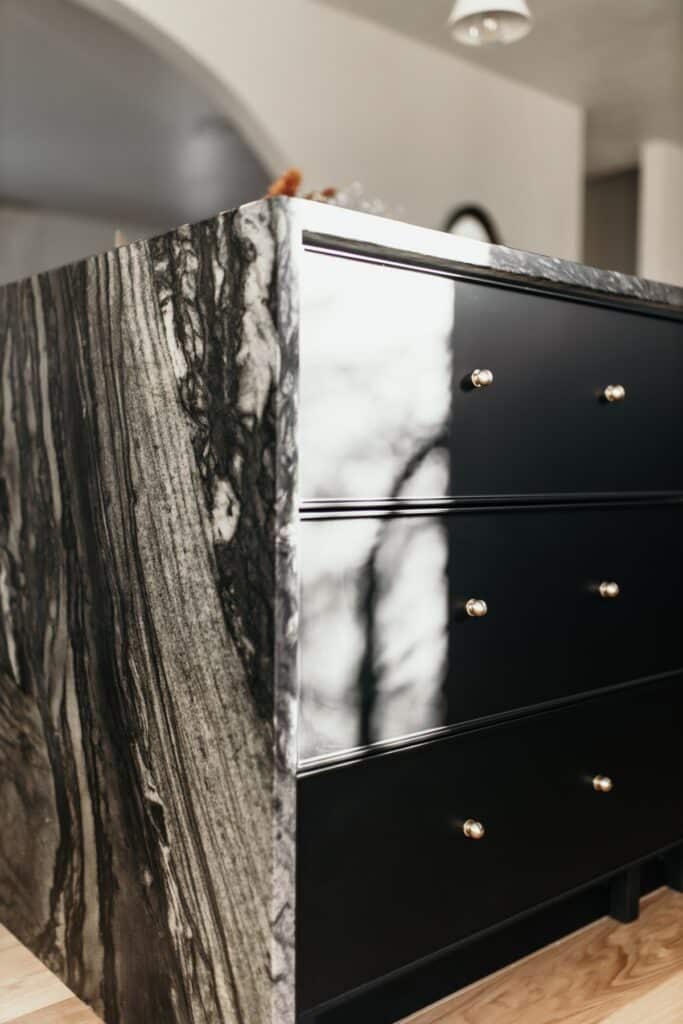 Margot Flynn Chavez and her husband renovated their 1970s Colorado home at the peak of the pandemic, and yet despite supply chain issues, they were able to get their dream black-and-white kitchen. The existing kitchen, which was covered in pink tile, was an eyesore with a cramped layout, and they envisioned a midcentury-style kitchen with a classic palette.

“Black cabinets are very timeless. It’s hard to go wrong with them,” she says on choosing Peppercorn Edge cabinets from BOXI. She customized storage with IKEA drawer inserts, plus got creative with the quartzite-topped waterfall island. “When you see the right thing, it’s sort of serendipitous and you have to just go for it,” she insists. “It’s leathered, so it has this beautiful texture to it. It’s like a piece of art in our house.” 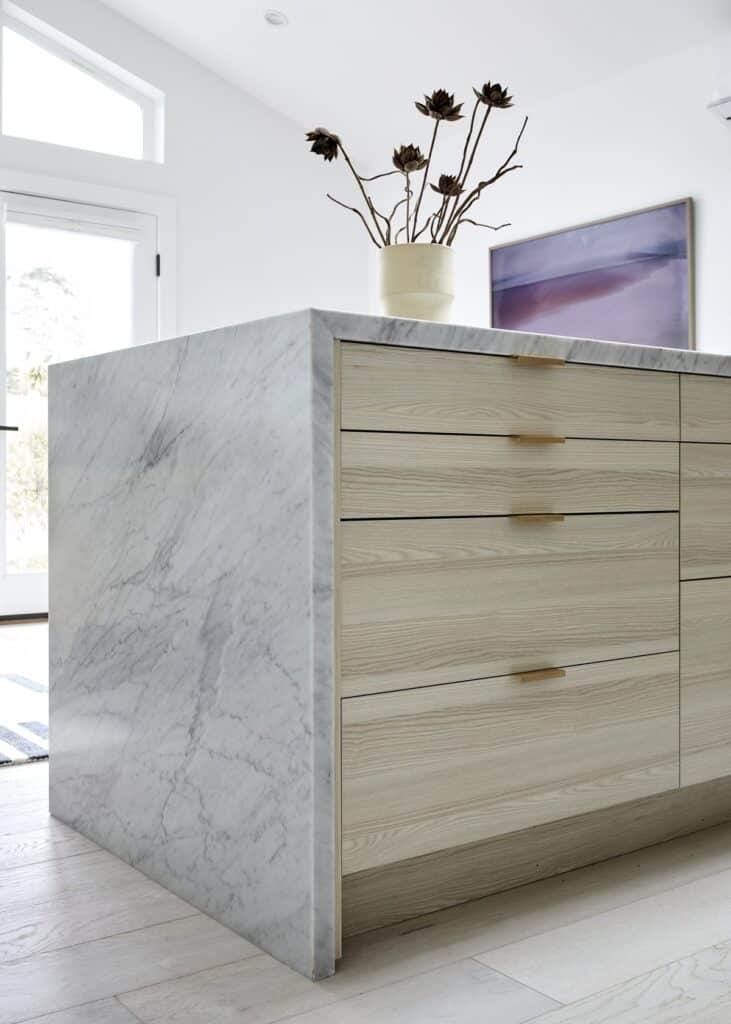 Brooke Herman works with her father and five brothers to buy, renovate, and run apartment buildings and MFUs. With a goal of creating spaces people are excited to live in, it’s no wonder her recent project, a Carpinteria ADU, is beautifully designed.

She and her husband viewed building an ADU on their property as a solid investment, and began looking online for inspiration. Her inspiration image, an airy kitchen from Pinterest, was brought to life with the help of IKD and BOXI. Despite being a small space, vaulted ceilings, a lot of windows, BOXI Oat Slab cabinets , and a waterfall Carrara marble countertop make the kitchen feel chic and welcoming.