Mixing modern style with historic details was designer Jessica Gerlach’s aim when she began renovating the main bathroom in her historic Portland home. She also wanted to bring balance as it had been renovated by multiple owners over the last 90 years. 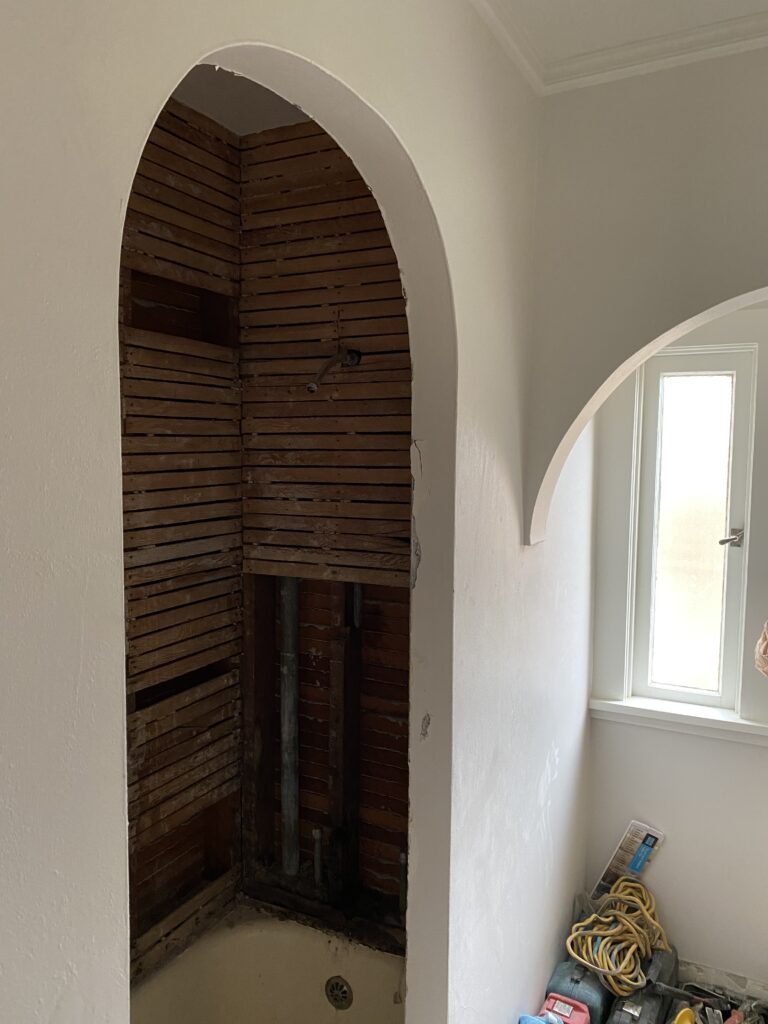 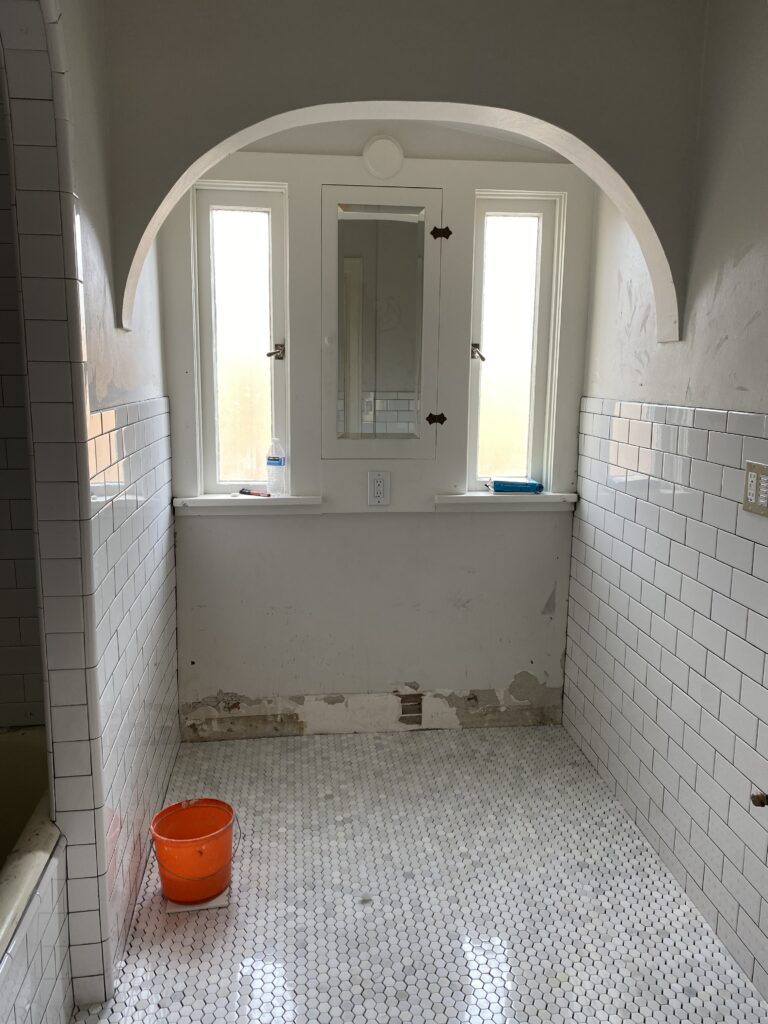 “This house was very quirky and needed a lot of love when we first moved in,” she says. The bathroom had vintage touches, but lacked cohesion. The tile floor wasn’t original, and neither were the pedestal sink nor tile backsplash. Furthermore,  the previous owners had added a dark wood dresser for storage. In fact, the only original features were its cast iron bath tub, medicine cabinet, windows and arches gracing the tub and window enclosure. “This is a Tudor-style home built in 1929 and there are a lot of arches throughout the house,” she says, including in the living room, and on the leaded glass built-ins.

For the first phase of her bathroom makeover, Gerlach gave the vintage wood dresser a fresh coat of paint and switched out the light fixtures, while the full renovation included the repair of the aging shower enclosure, cast iron tub, and executing a unified design ethos. 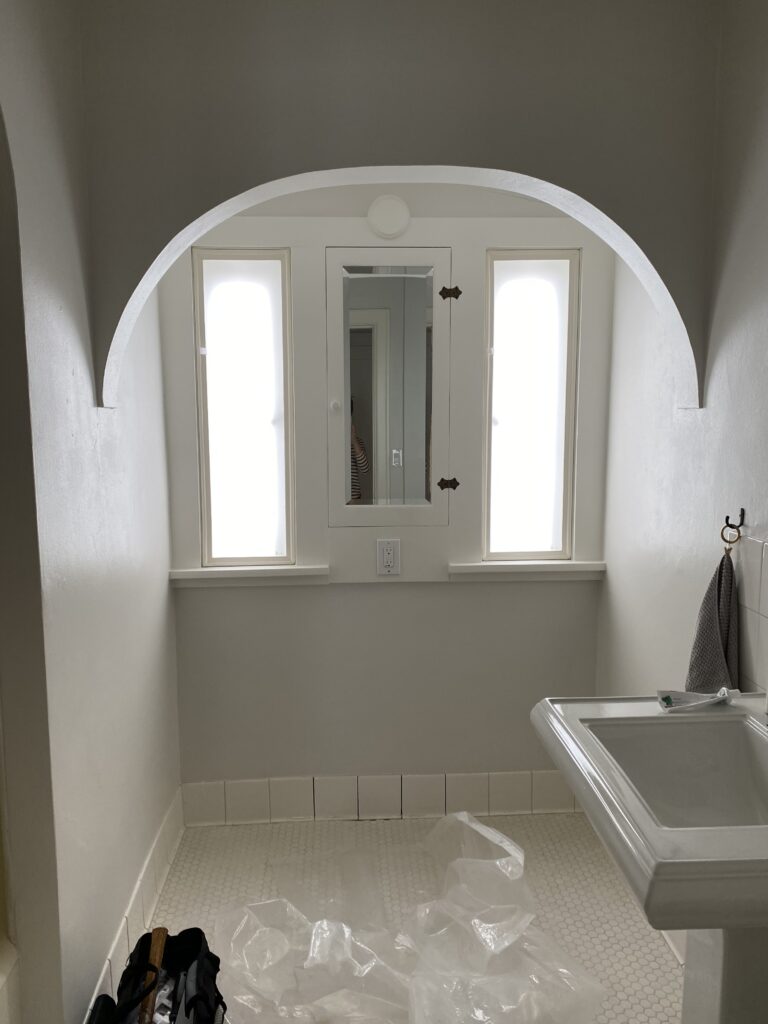 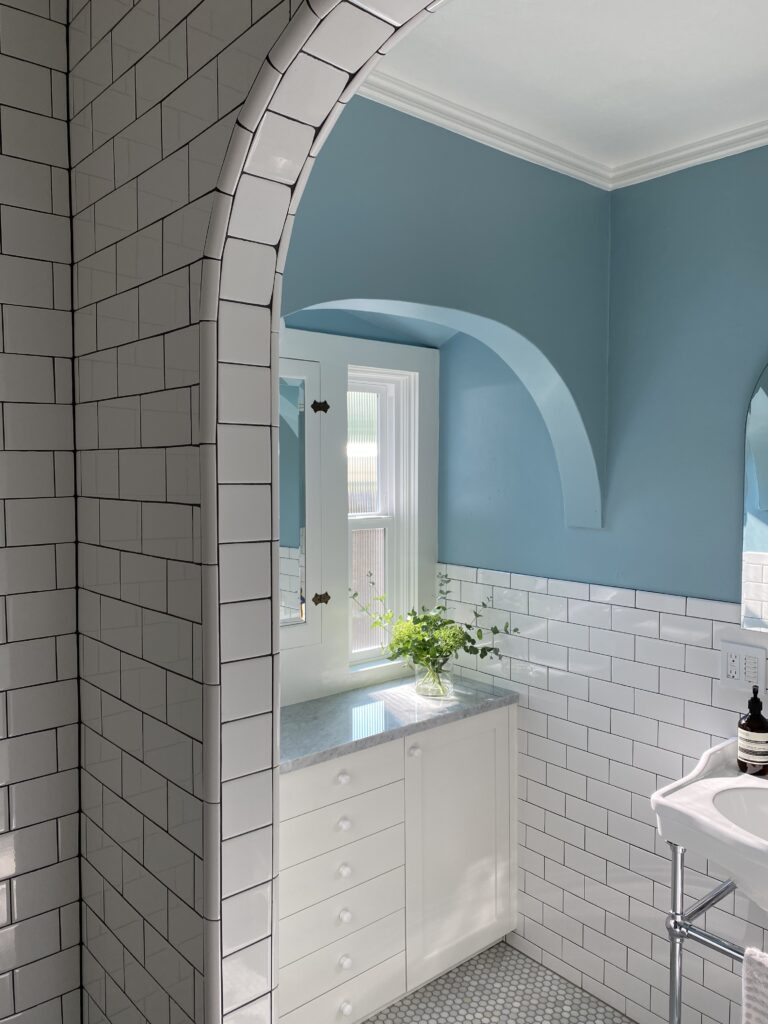 “I looked at photos of 1920s and 1930s bathrooms,” Gerlach says. “I saw lots of double windows flanking medicine cabinets.” Thus, she ultimately  removed the dresser and replaced it with IKEA cabinets with Semihandmade fronts. “I did the DIY Shaker fronts. I chose that so I could paint them the exact same color the trim above the counter was painted,” Gerlach says. Sherwin Williams’ Alabaster made the new built-in piece one that seems as if it could have been original to the home.

She considered adding a center cut-out for vanity-style seating, but the need for storage won out. “This is our main floor bathroom my daughter uses, so we’ve got kid stuff in there,” she says. The storage allowed her to have a pedestal sink. 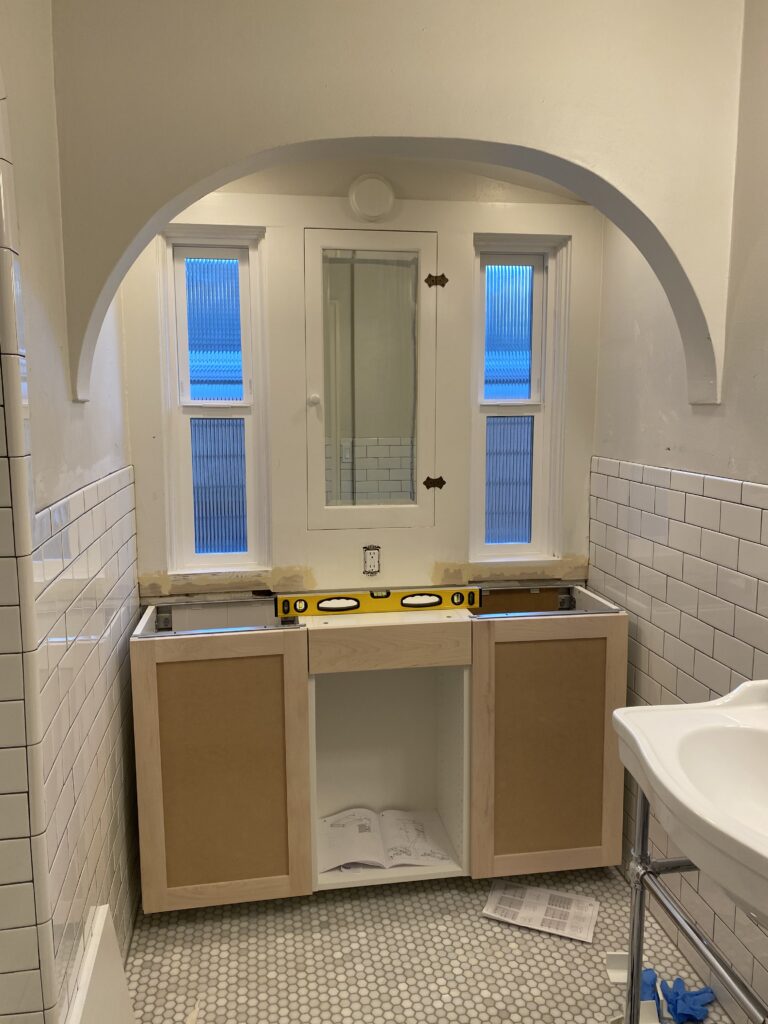 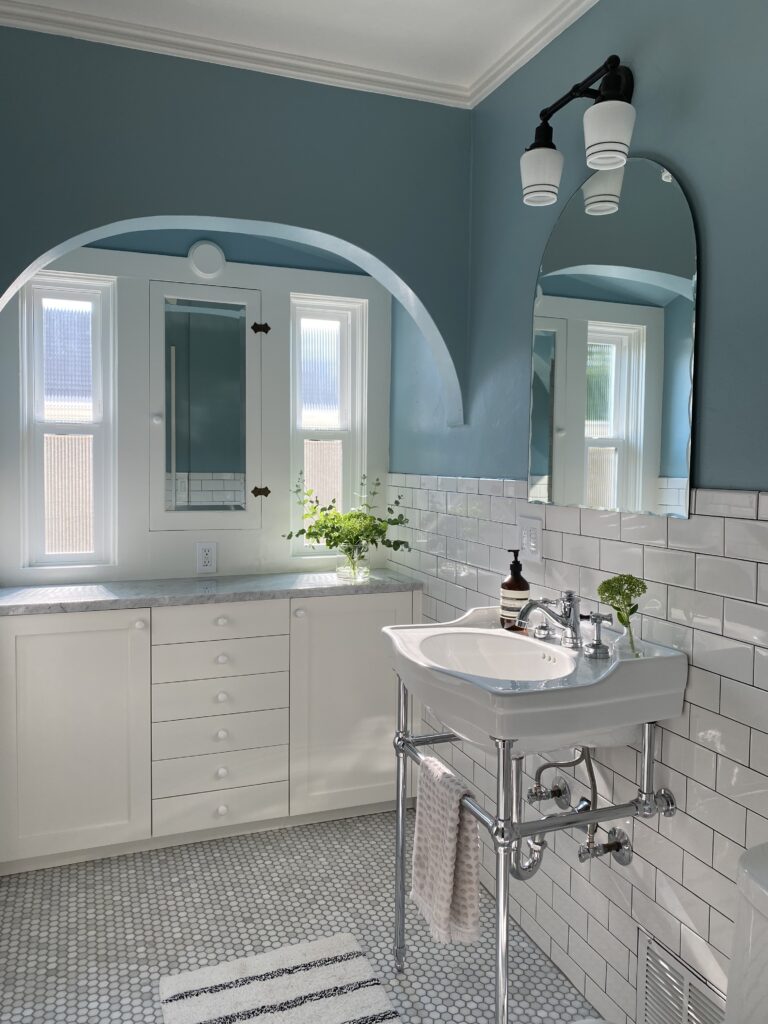 Topping the vanity with white-and-grey veined marble fulfilled one of her renovation goals. “I figured the bathroom would be a safe place for marble,” Gerlach says. “I’ve always wanted a marble counter in my kitchen, but I don’t think that I could live with the etching.” Marble is a relatively soft stone and its surface can change and develop lines or spots when it’s exposed to harsh cleaning products or acids like lemon juice and wine.

Choosing the right tile was a big piece in the design puzzle. During the demolition, she uncovered the original flooring, one-inch hexagon tile with a white-and-black floral pattern. Gerlach thought about recreating it, but instead chose a simple marble to mirror the marble vanity top. Additionally, she clad the bath enclosure and sink wall in white subway tile with dark grouting, which pops against Clare’s dreamy blue tint Summer Friday. “I love subway tile. I think it’s classic and bright and it’s affordable,” she says. “There are a lot of reasons why I love it, but I did want to do something a bit different.” 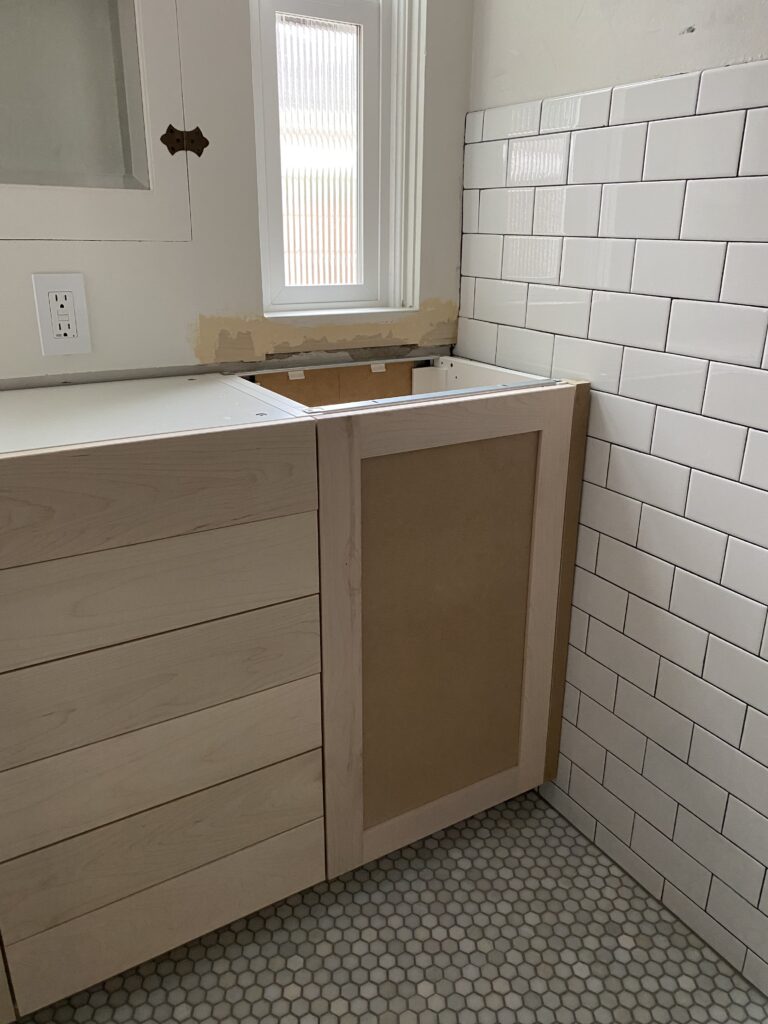 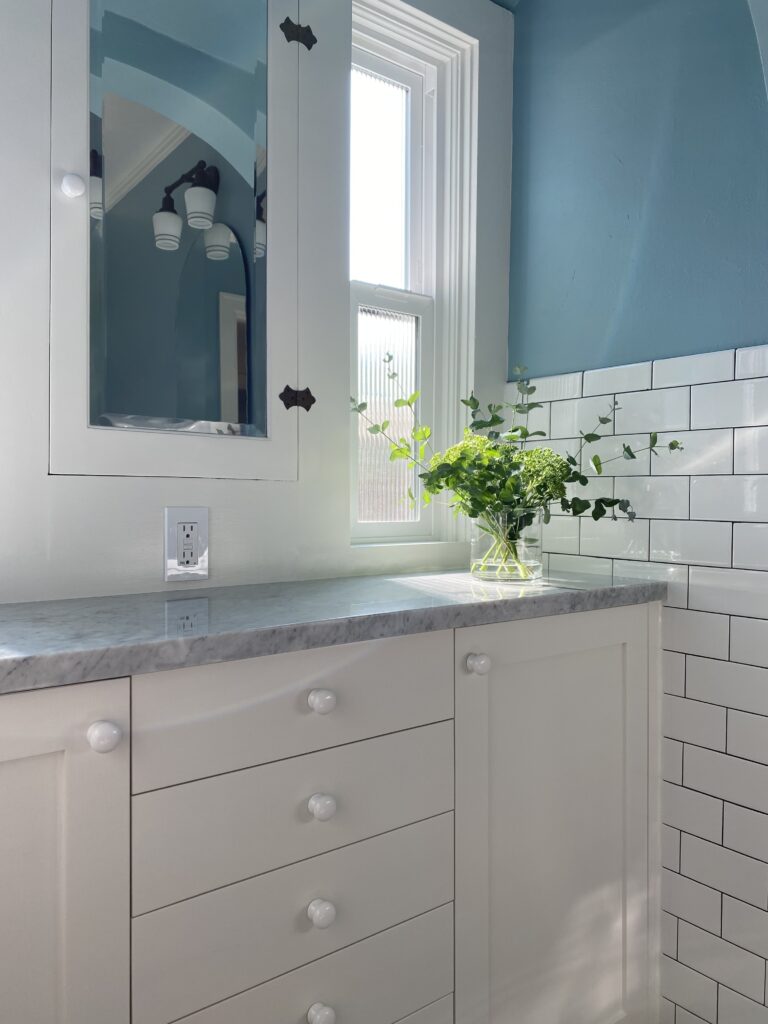 While it was a challenge to tile the shower arch since it wasn’t level or plumb, Gerlach is happy to have a house with these vintage curves. “I do love the character,” she says. “These elements like the arches in the bathroom and the built-ins you just can’t find in a new-build. It’s fun to embrace these old features.”