When interior and furniture designer Rosa Beltran purchased a 1936 Craftsman in the Silver Lake neighborhood of Los Angeles, she tore it down to the studs.

“It was a gut remodel—almost new construction,” she says. “The only thing that was left standing was the framing of the exterior walls.”

Though the interior of the house is entirely new, Beltran didn’t want it to feel that way. Her goal was to give the 1,800-square-foot space a modern configuration without forfeiting its historic appeal. Although she had to remove original features like cove ceilings and a fireplace to create an open layout, she chose vintage-style materials and furnishings as a mix of old and new. “Everything has a little bit of patina to it,” she adds. 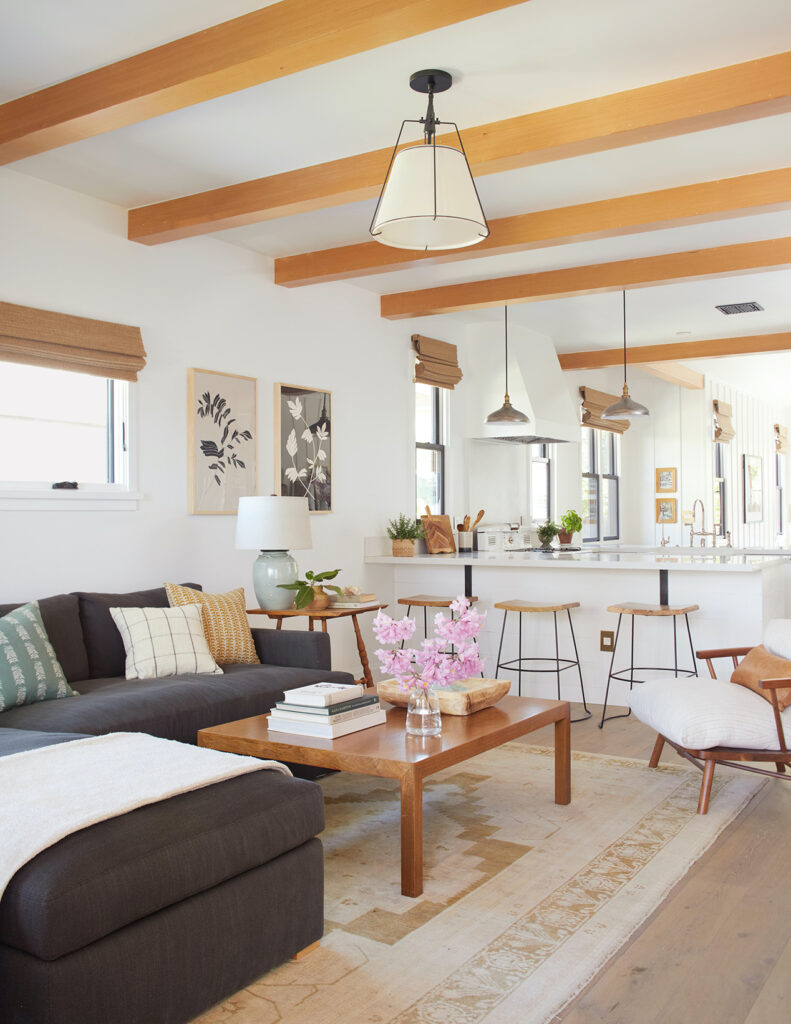 “I reconfigured the flow of the whole house because it was very compartmentalized and that’s just not the way modern families tend to live," she says. 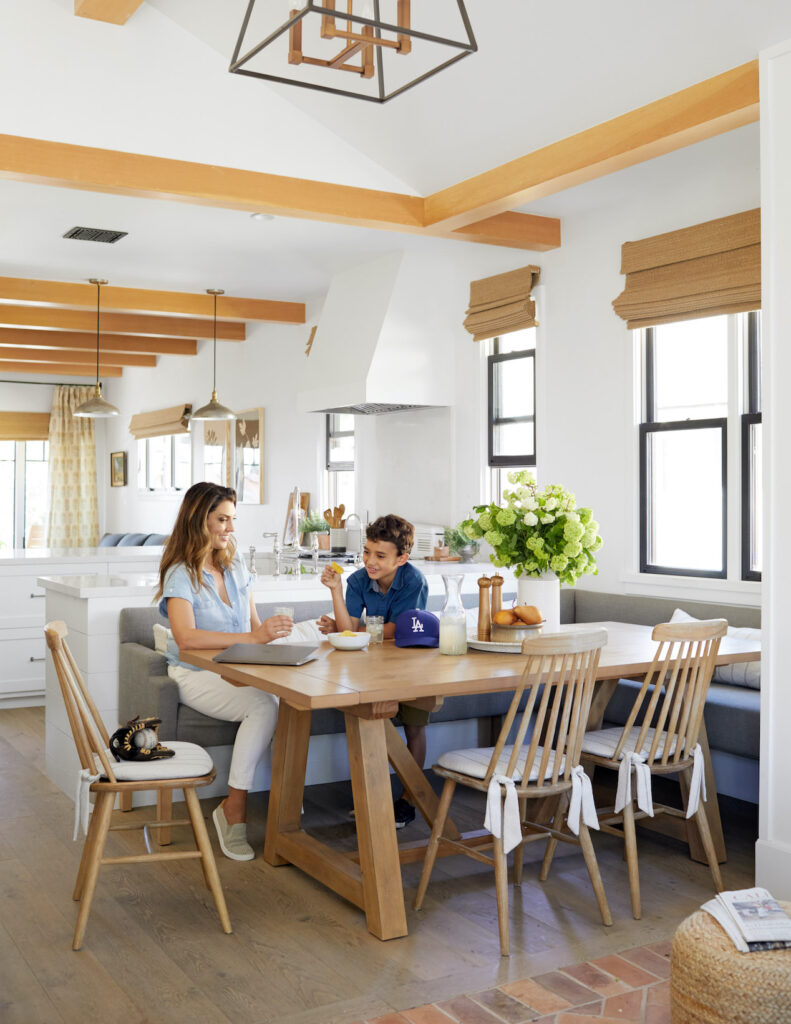 “That’s the advantage of being able to do custom furniture: You can make anything fit,” Beltran says of her dining space.

To set the base for the decor, Beltran installed European white oak flooring from Saroyan Hardwoods and painted all the walls in Benjamin Moore Chantilly Lace. It’s a bright shade of pure white, and she thinks that it makes for the ideal backdrop—especially for the ceiling’s exposed beams. “They’re not structural, but they give a special architectural detail,” Beltran says. “When you’re doing a new build, you could so easily end up with a drywall box if you’re not careful to add some stuff.”

This is the crisp backdrop for the centerpiece of the home, a U-shaped kitchen that sits between cohesive living and dining areas. Semihandmade DIY Shaker Doors were used on the lower cabinets, which are painted in the same shade as the walls, and Beltran enlisted her carpenter to make custom baseboards for a footed appearance. Quartz countertops from MetroQuartz envelope a 1950s enamel farmhouse stove, which simultaneously matches the palette and stands out on its own. “All of those moves were intended to keep the vintage charm of the house,” she notes. 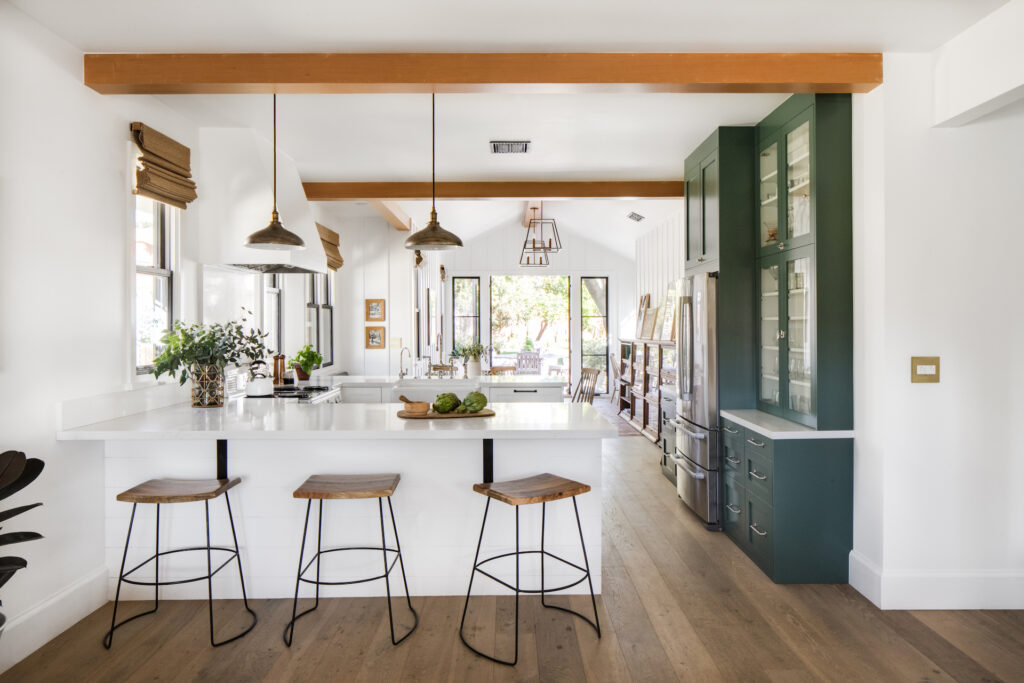 Beltran used nickel, brass, and black metal pieces throughout. “I’m a big fan of mixing metals,” she says. “You want to do it with some rhythm and balance—you don’t want it to be a total hodgepodge of things that don’t relate to each other. But if everything is all matchy-matchy, it just feels like a staged home with no character.” 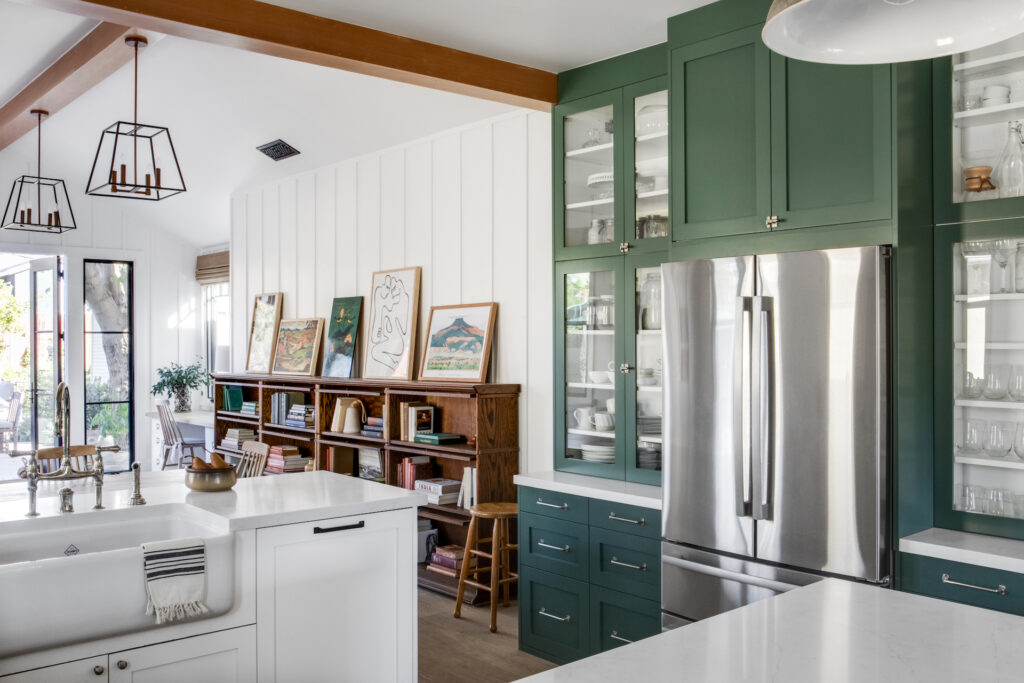 “I like my hardware to be really utilitarian," Beltran says. “I just think it's beautiful and better than decorative and swirly." She found multiple vintage barrister bookcases and had them combined to create one large storage unit next to the cabinetry.

On the opposite wall, Beltran built an expansive cabinetry system also using Semihandmade DIY Shaker Doors, which are painted in Benjamin Moore Lafayette Green for a burst of color. Once again, this inclusion was a way to incorporate the past.

“It’s very typical of ‘20s and ‘30s homes to have floor-to-ceiling cabinets with glass uppers and solid lowers and that little ledge countertop in between, so I was copying that look,” Beltran says. To complete the design, she looked beyond the typical pulls and knobs of modern kitchens and kept the look classic. “I wanted the hardware to look vintage, so those are casement window latches,” she explains. “I thought they looked like the hardware from vintage refrigerators and ice boxes.” 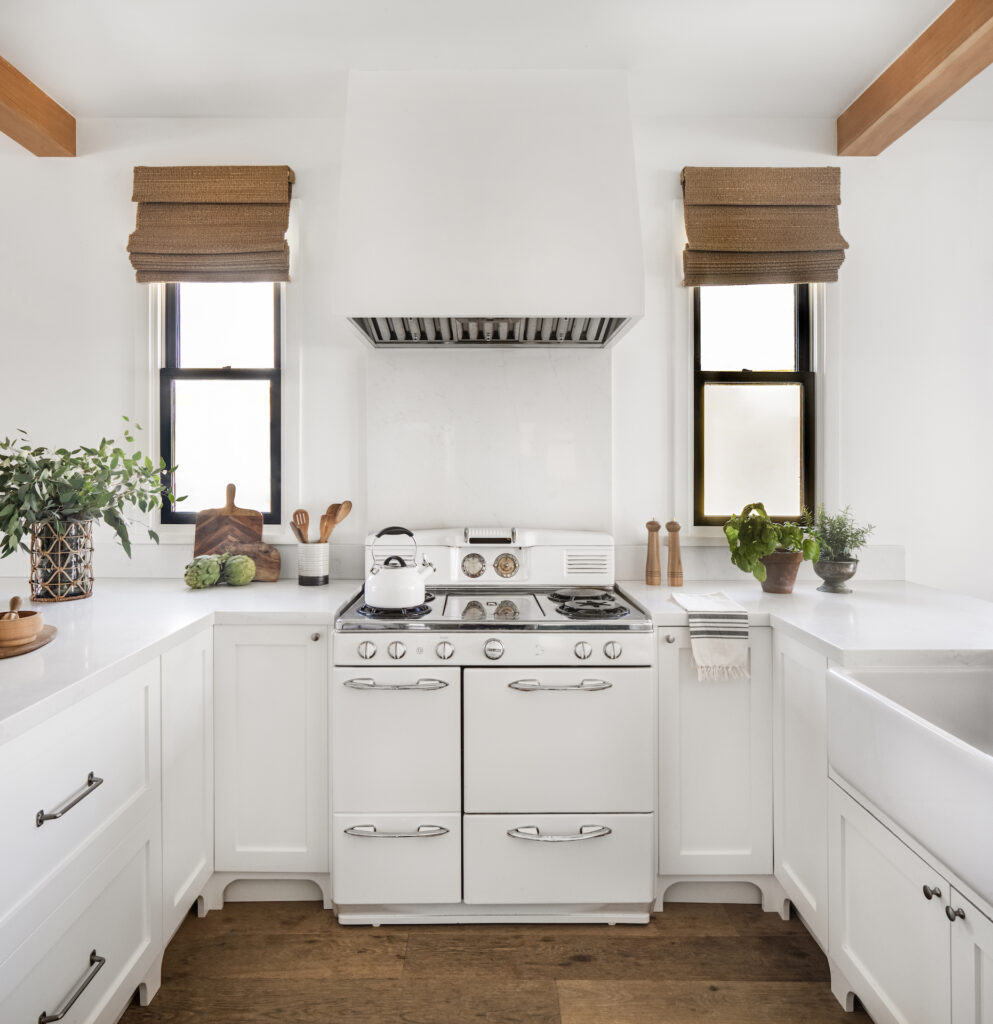 “All the lower cabinets are white because I wanted the flow to continue,” Beltran says. “I didn’t want the eye to stop because the kitchen is in the center of the space.”

The throwback kitchen details are balanced by the modern appeal of the shared spaces on either end of the property. A cozy living room is filled with furniture from Beltran’s own line, Clad Home, complete with a charcoal linen sofa and a vintage Americana chair. “The thing about an open floor plan is that you don’t have a lot of opportunities for furniture because you don’t have walls to put the furniture up against,” she says. “I only had the chance for one chair in that living room and it had to be a good one.”

Furthest from the front door sits a sunroom awash in light. It can be seen from the living area, kitchen, and dining room preceding it, but it still feels like an intimate space all its own. Though it was an addition to the original structure, Beltran wanted it to feel like an old porch that had been there for decades. Windows on every wall stream in light across a patterned couch and desk space, and tall ceilings with matching pendants only enhance the overall airiness. For the flooring, Beltran used an Arto cement tile that looks like brick and arranged it in a herringbone pattern. “It is really rustic,” she says. 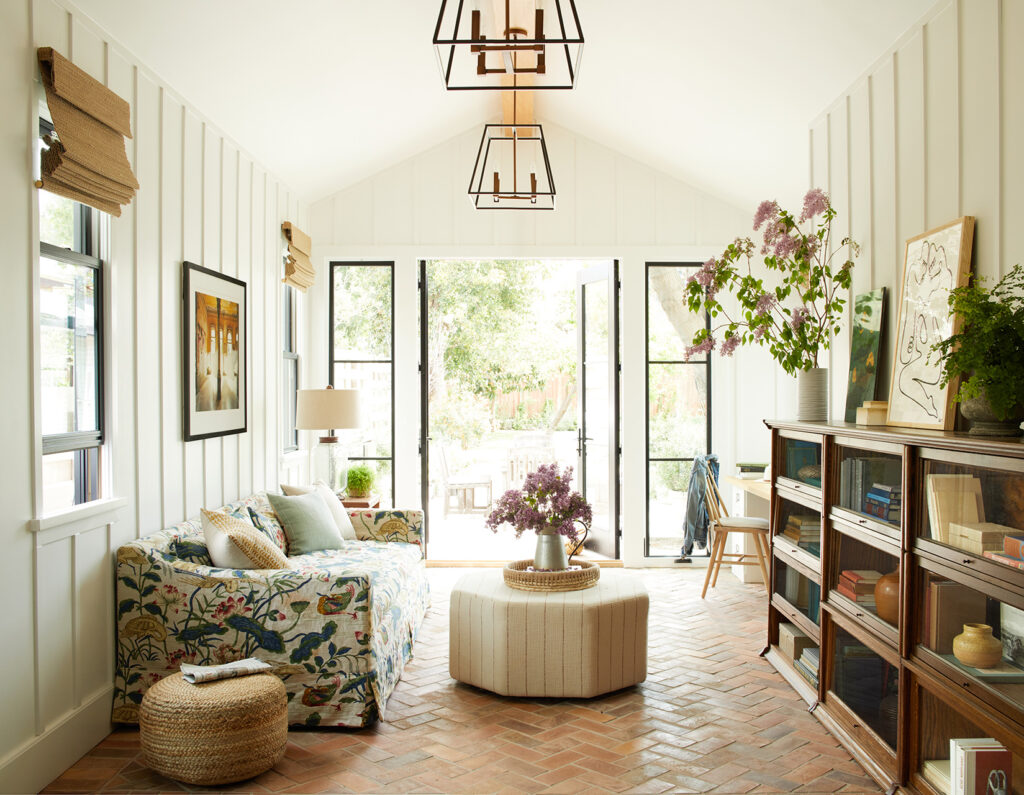 The sunroom features vaulted ceilings and a bold Clad Home couch. “I wanted to go wild with a print and make it a statement,” Beltran says. “I picked a bird pattern as a nod to the garden and the fact that the sunroom is a transition into the outdoor zone. I wanted to have a little fun with it.” 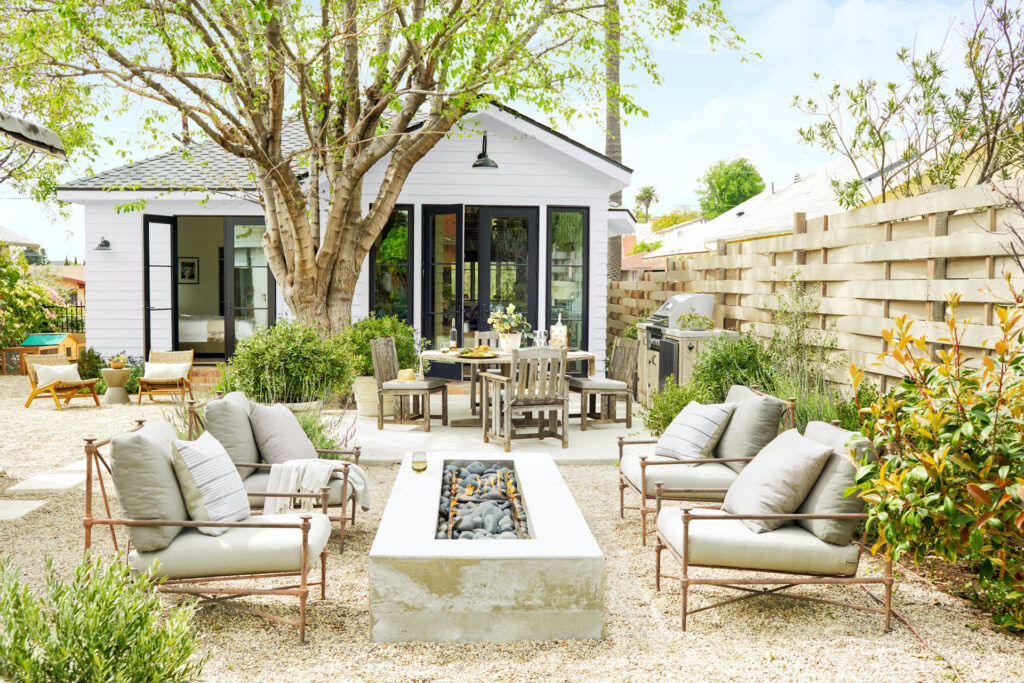 “It’s hard to find a flat lot, especially in Silver Lake, so I knew that I had the potential to create this amazing outdoor situation—what California is ideal for,” Beltran says. She blended the sensibilities of an English garden with those of a Mediterranean courtyard to conjure the ultimate sanctuary.

Through the French doors, a serene backyard makes the most of a flat lot and fresh air. Beltran used pea gravel and raw concrete to set the scene, and planted greenery with mostly white flowers to maintain a calming palate. A large dining table was chosen for the patio—she loves the old, grayed effect of weathered teak—and a built-in grill, fountain, and fire pit sit nearby.

“I was trying to create a retreat,” she says. And she did, from the ground up.