Brandy Joy Smith is a woman that dons many hats. The design enthusiast, mother of two, content creator, and advocate (She sits on the board of Austin-based Rosa Rebellion that aims to amplify women of color and reclaim black spaces), is no stranger when it comes to putting in hard work.

Smith and her husband have flipped homes in both Brooklyn and Los Angeles, and she’s enjoyed sharing her projects on Instagram. Her latest, which includes the family’s main home, a three-bedroom ADU, and one-bedroom junior ADU exudes a modern yet warm aesthetic and plenty of BOXI by Semihandmade cabinetry. 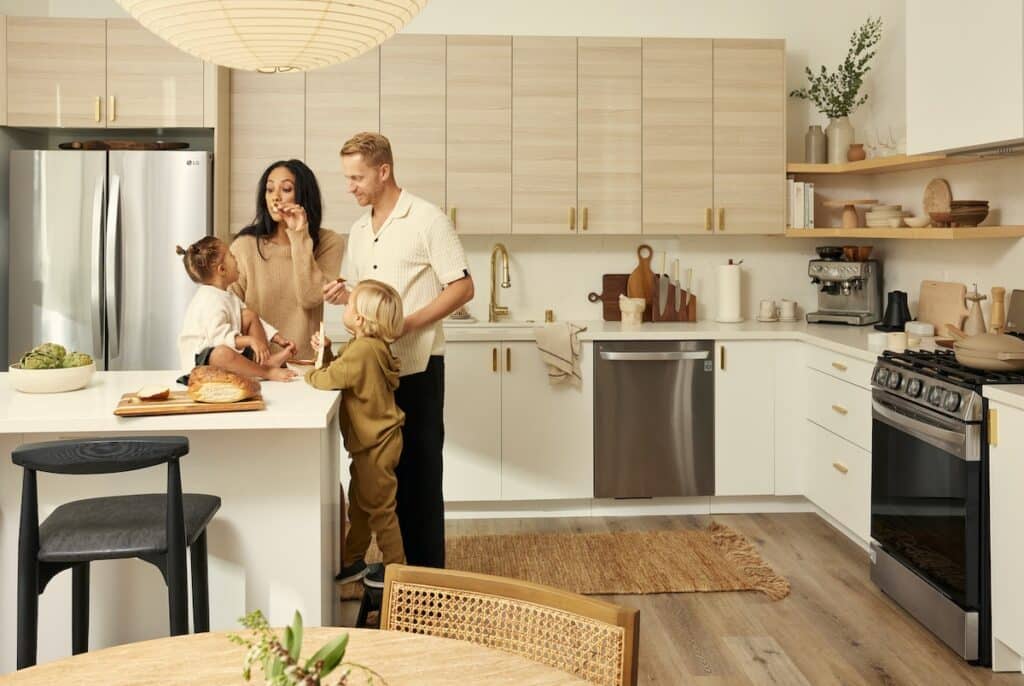 Smith lives in View Park, the largest National Register Historic District in the state. “It’s the black Beverly Hills,” she says. “Back in the day when African Americans weren’t allowed to live in Beverly Hills they started this community.” With beautiful views of downtown, the southwest LA neighborhood has attracted celebrities like the late Ray Charles, Regina King, and even Meghan, the Duchess of Sussex.

“We bought this property initially thinking they would just be rentals but were looking to hold onto it long-term. We weren’t exactly sure what that would look like,” she says. The plan was to give each space its own identity, one that would be memorable and relaxing.

Not Your Average Airbnb 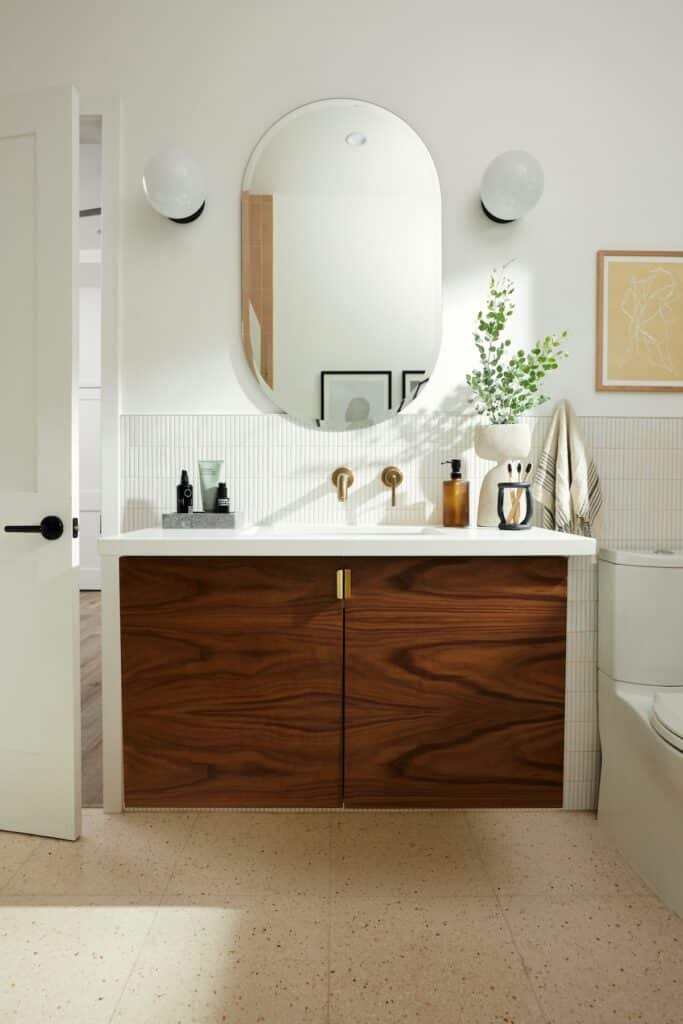 Smith was unimpressed with what was available on Airbnb in the LA market.

“Aesthetically, they fell flat,” she says. They were either funky or some weird mansion in Bel Air. There was no in-between.”

This led them to think how they could curate a well-designed space that would not only appeal to the masses but show off Smith’s budding design tastes. Plus, with the two rentals on-site, they are able to be hands-on. “Any issues we can handle whole we get the kinks out,” she adds.

Starting From the Middle 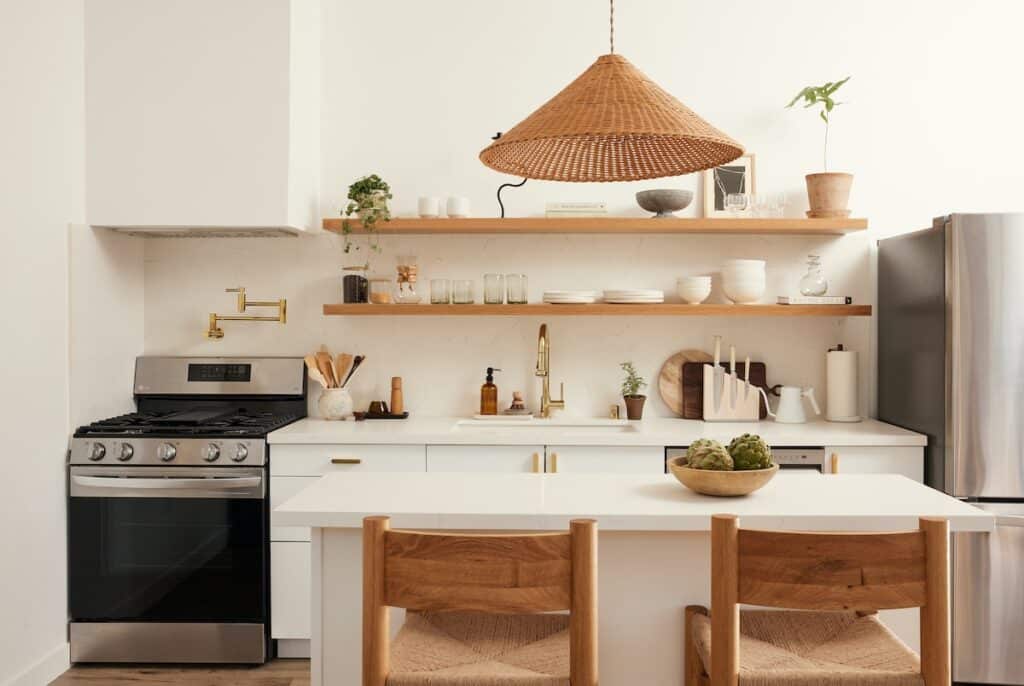 When the couple bought the property, it was 70 percent done with drywall yet no flooring and basic plumbing and electrical. It was built by a developer that had fallen ill and had to stop construction. “My husband kept driving past it and talked to the realtor,” she recalls.

While the “shell” may not be a buyer’s dream home, it was ideal for crafting a truly personal family home and rentals. 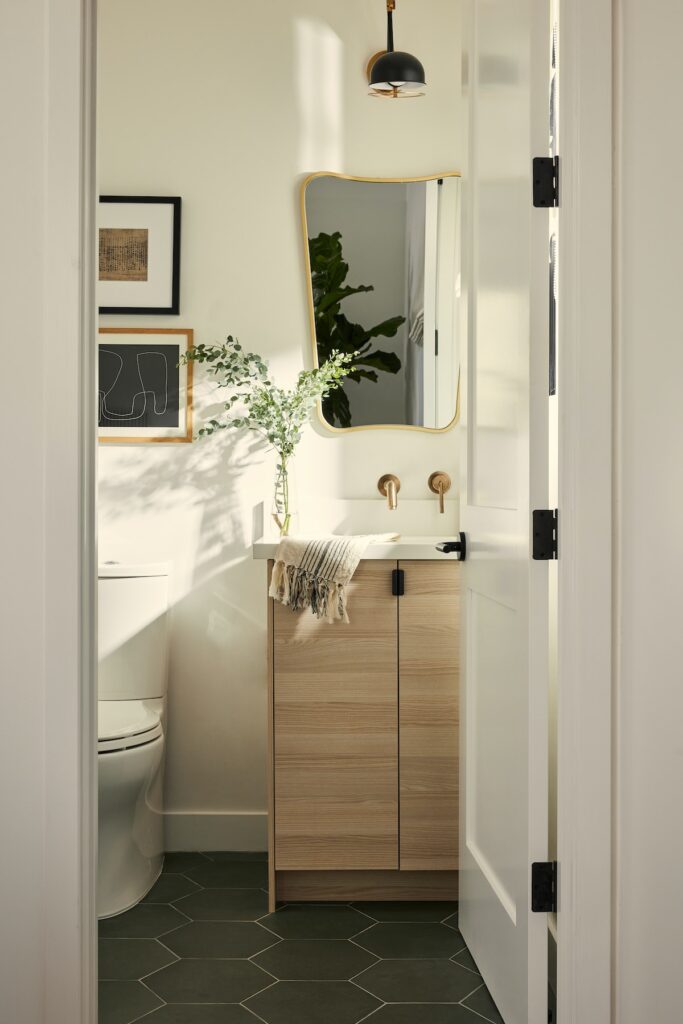 When it came to decorating, the pair spent more on the “extremely tactile” items, pairing pieces from Soho Home, Sixpenny, CB2, and West Elm with steals from Target and Wayfair. For cabinetry, they initially planned to go with Semihandmade but were unable to find any IKEA boxes within their timeline. “Our initial search and Google’s powers led me to BOXI,” she says.

“I fell in love with the different styles,” she says. Plus, she loved how BOXI offers design services to “take the guess work out of everything” and was delivered quickly and on-time. “Anyone doing construction projects know that that is almost impossible. It was a huge selling point,” she adds. 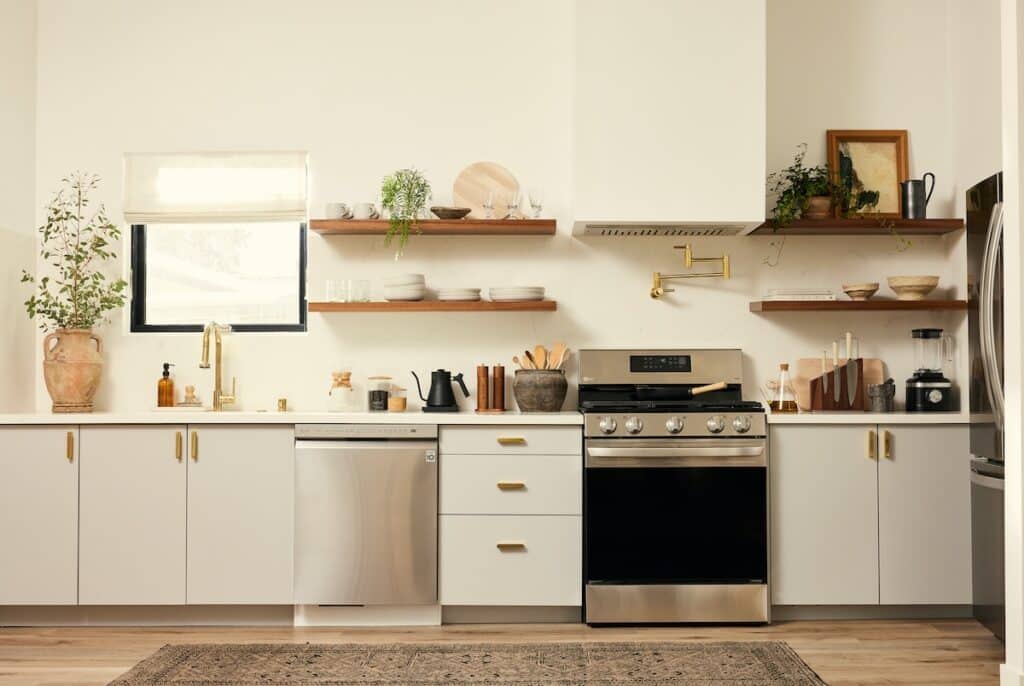 For the main kitchen, Smith went bold with a two-tone look with BOXI Salt Slab and Oat Slab, while the ADU has Mushroom Slab and BOXI walnut floating shelves and the JADU has Salt Slab cabinets. “I was thinking about doing Peppercorn Edge but that was similar in style to other cabinets we had done before,” she says.” We had also done Shaker in another property. I feel like new construction has a naturally modern feel” something that perfectly complemented BOXI’s slab-style cabinets. 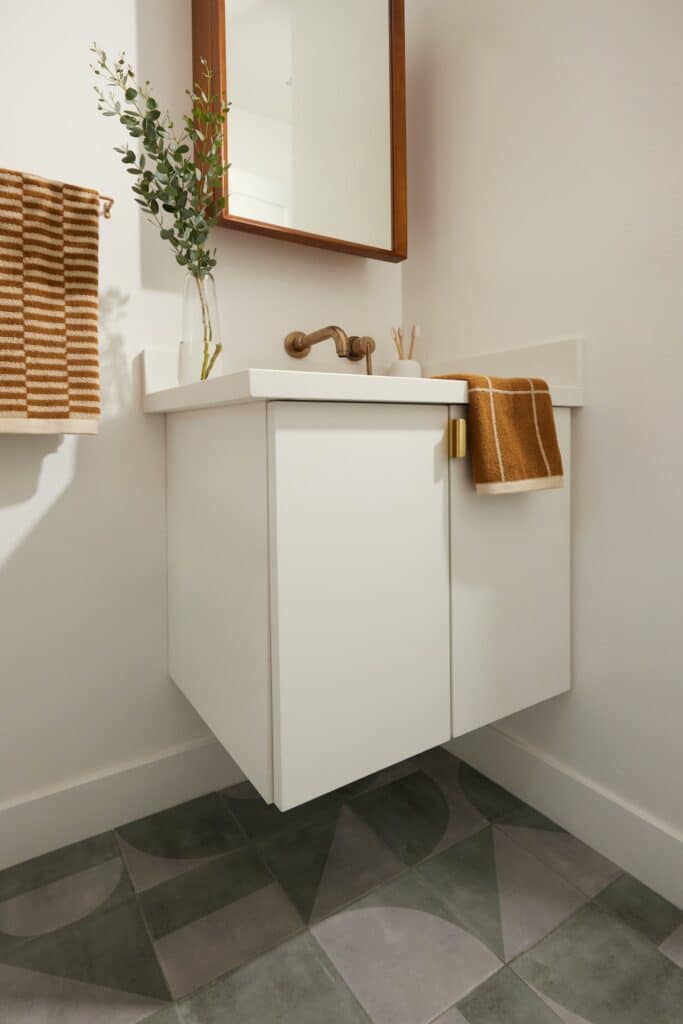 Smith also turned to BOXI for her bathrooms, using its brand new vanities. A Salt Slab vanity pairs with a patterned floor in her guest bath, while walnut adds richness and warmth to her master suite. “At first, I thought the walnut was too midcentury, but it worked out with the styling,” which included a frameless oval mirror, sleek fixtures and a “big and bold brass Delta faucet.” 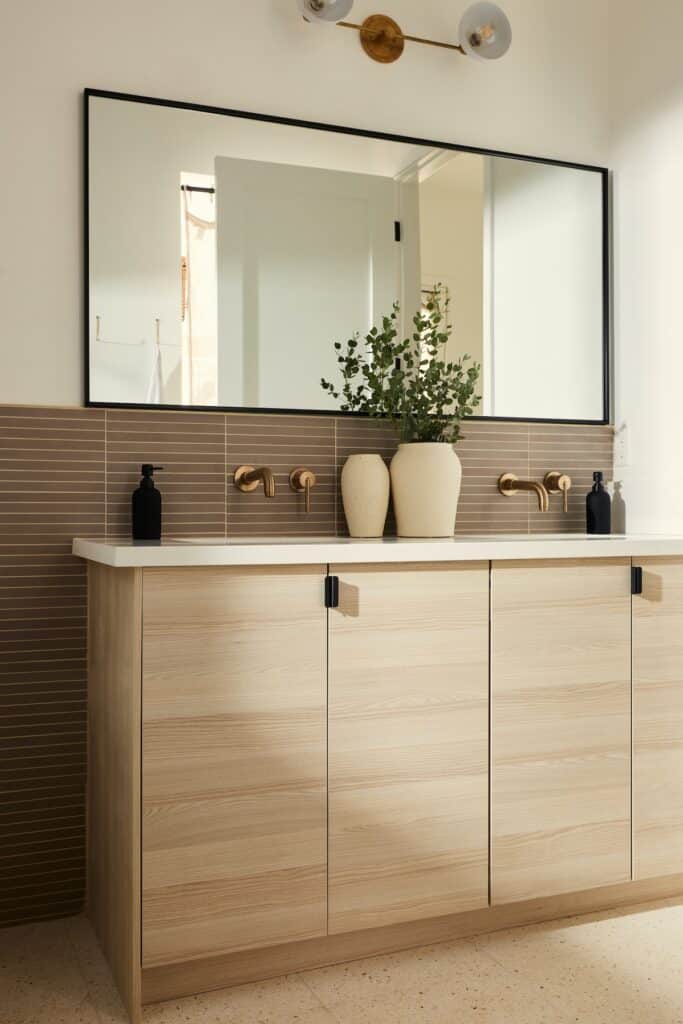 To counteract the starkness of new construction, Smith “brought in a lot of wood tones, pottery, and textures to give a little bit of Wabi Sabi,” she says. While in the past she was hesitant to layer wood tones, she loves the depth it brings and encourages her followers to ignore some of the old school design rules. “I love taking a risk,” she adds. One such risk was doing a two-tone kitchen. 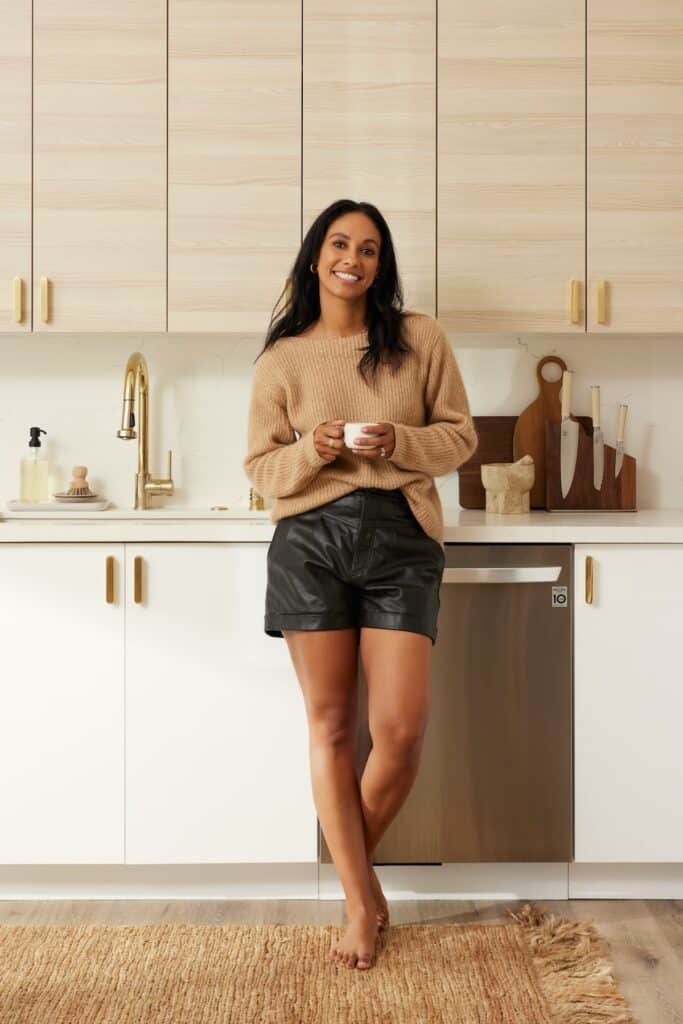 “Make sure to do your research when it comes to big items,” she says. In addition to BOXI’s styles and price points, she loved how they’re simple to clean and rental-friendly. “Two days before we did the photoshoot, my daughter took a permanent marker to our lower kitchen cabinets,” she says. With just a wipe and water, the cabinets were photo-ready once again.

Always prepare for things to take longer than expect, Smith cautions. While BOXI cabinets ship quickly, especially to those living in Southern California, many other items were delayed due to COVID-related supply chain issues.

Smith’s final note for those looking to decorate a rental property is to “mix styles and go for neutrals,” she says. Vacationers should be able to see themselves in the space. Although the family has just started hosting via Airbnb, they are already looking to their next project: building their forever home in Eagle Rock.