DIY advocate Erin Crane carved out a clever work-from-home space in her bedroom with a Besta center, complementary paint colors and thrifted decor.

As big fans of mid-century architecture and design, Erin Crane and her husband Ryan practically had to pinch themselves when they found what is now their family’s home, a classic mid-century house built in 1965 located on a ridge overlooking the Puget Sound. “We jumped on it and got really lucky. It had so many original details intact, like the vaulted wood ceiling, the original stone fireplaces, and a Palm Springs-style pool,” Crane says of the five-bedroom house. “It felt like a dream come true.”

When the pandemic hit, Erin –like many working moms– needed to carve her own quiet space in the bustling house to work. Instead of opting to create a closed-off office space, she got creative and found a solution that allowed her to also spend time with her three kids. “I didn’t want to convert space away from my kids –they have a playroom downstairs–  because they were home so much more too, so I landed on carving out a space in our large primary bedroom. That way I could close the door when needed, but still be close to all of the action at home,” she says. 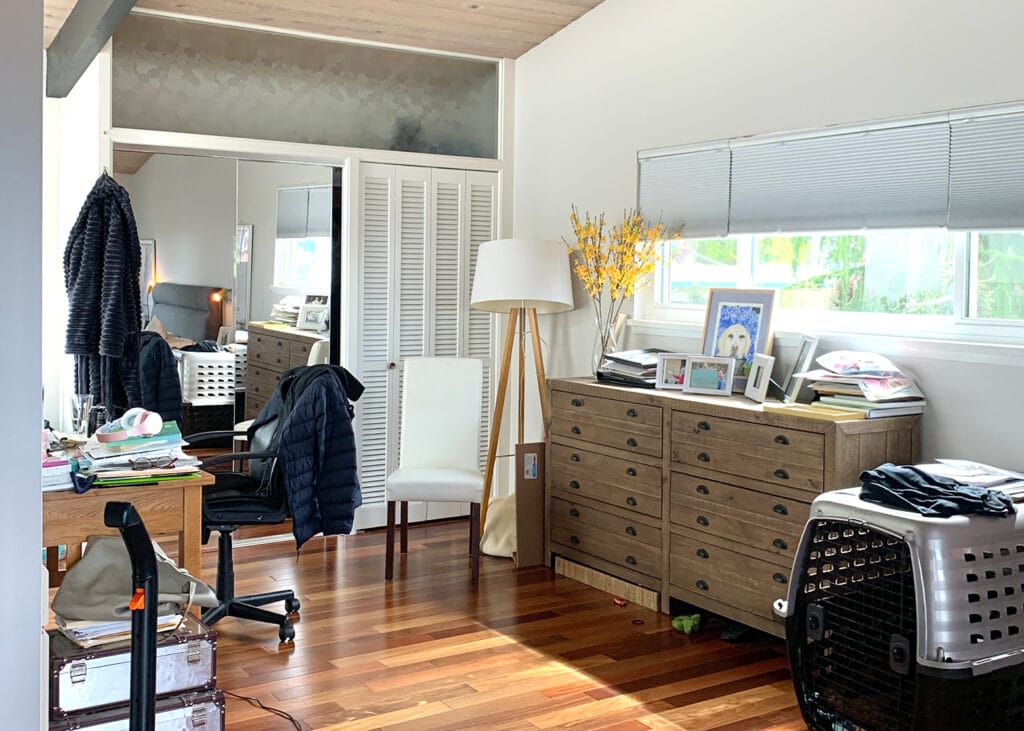 A tenant of mid-century design is bringing the outside in, which is exactly what she did in her space. The house is located a short hike away from a rugged beach and the roof deck –which opens right at Erin’s nook– features views of the Olympic Mountain range. “Our home is filled with big windows, and part of what I strive for is to let those views be the hero and let the design speak quietly to it,” she says. 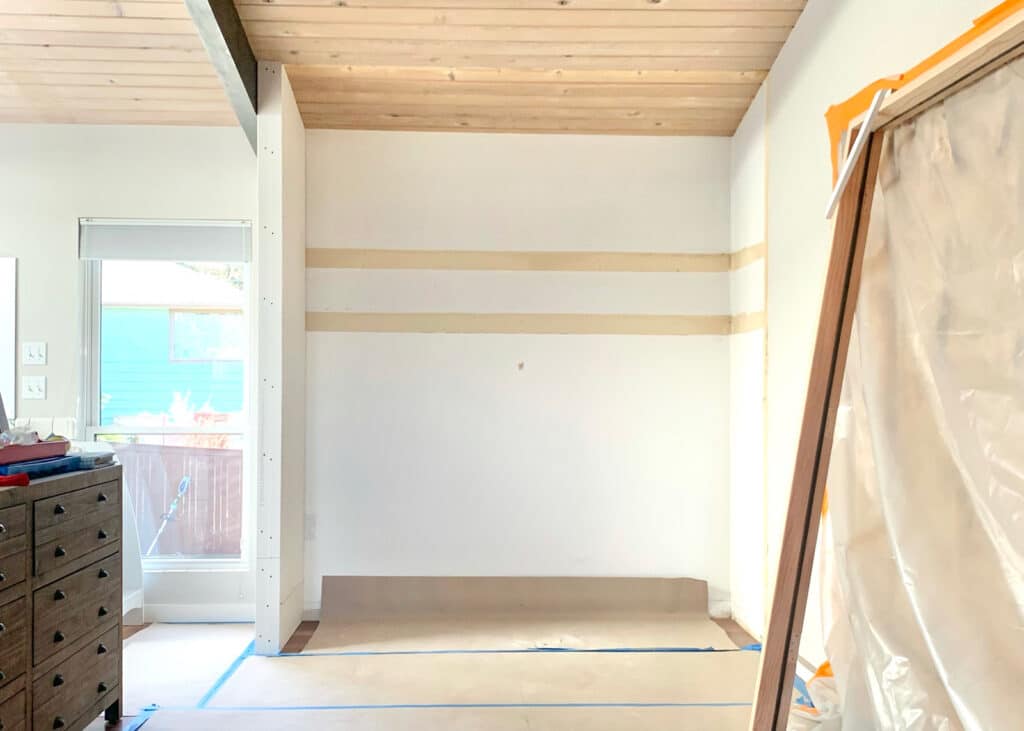 DIY to the Rescue

The room’s design features a good amount of natural light during the day, thus she capitalized on this with the addition of a Besta media cabinet with Semihandmade’s SSS White Beaded doors. The white cabinets make the space feel lighter and brighter and also function as a place for separating her work life and home life. “I wanted to be able to put away the work zone in the evenings to keep things relaxing and calming. That’s where the media cabinet came in –it gives me all of the space I need to keep files, folders, and supplies organized, but importantly, out of sight. Even the things I use daily have a place to tuck away,” she says.

The bedroom’s walls are painted in what Erin describes as “the lightest creamy warm gray,” and for the accent wall she went for Clare’s Current Mood, a deep green that is reminiscent of the trees outside. 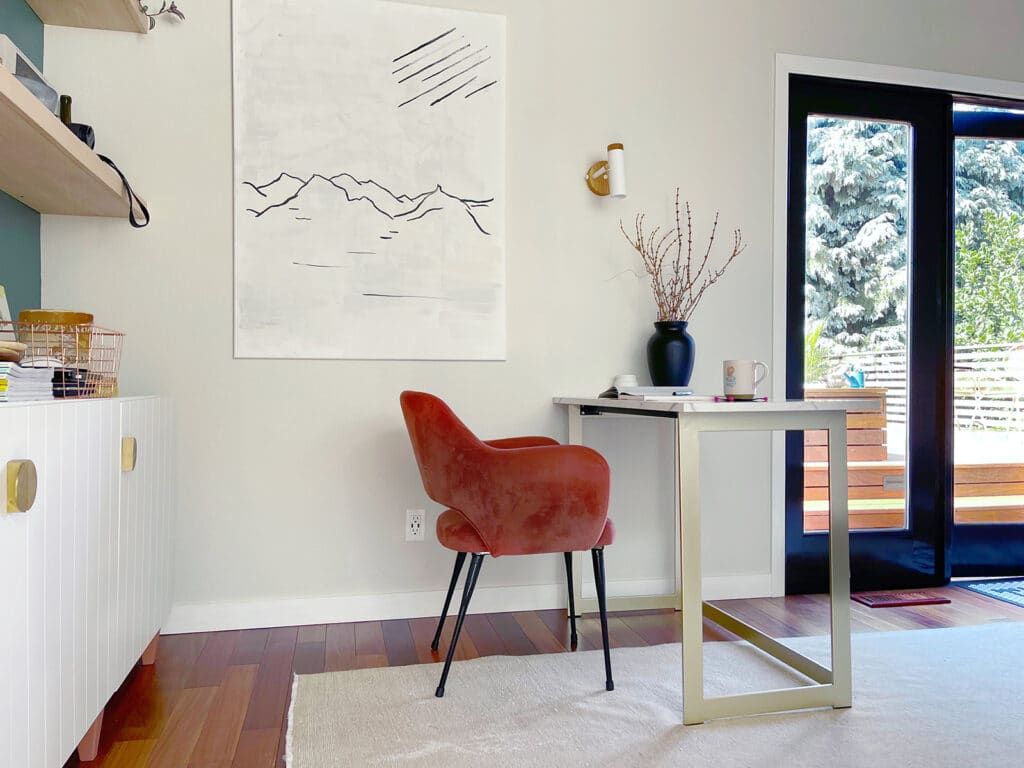 Mixing Vintage and New, and Things Made Anew

Custom unstained ash wood shelves, built to fit perfectly in the space, feature metal supporting brackets that are hidden and fastened right into the framing. In order to style the shelves, she spray-painted vessels and used objects from around the house that she already owned. “We chose to invest in really quality permanent materials across these projects, so I stuck to a lot of less expensive, thrifted, and repurposed items for literally everything else,” she says. A vintage Turkish rug brings texture to the sleek, dark Brazilian cherry floors. “I’m a big believer in always having at least some vintage, or at least some pieces with some wear and life in them,” she says. 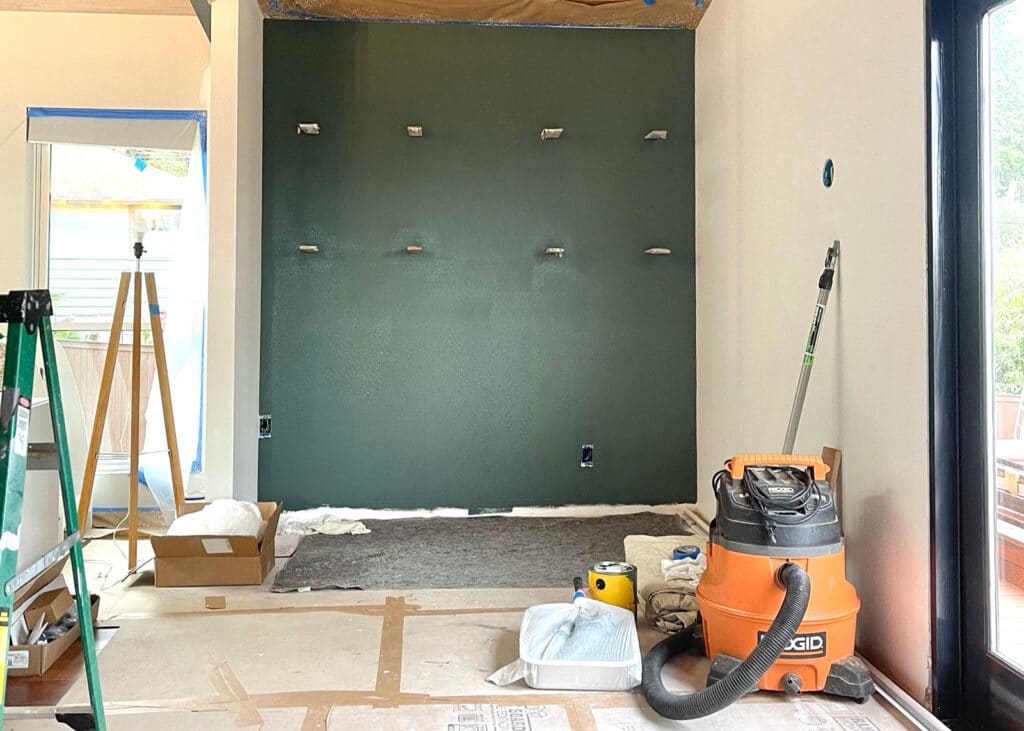 A Balanced Work and Home Life

Although the space gets used by everyone in the house, including her winemaker husband (it’s the ideal Zoom background for virtual tastings!), the renovated nook primarily belongs to her. “A big challenge was just simply taking it on during the height of work and school from home during the pandemic. The “before” photos bring home just how chaotic things felt,” she says. 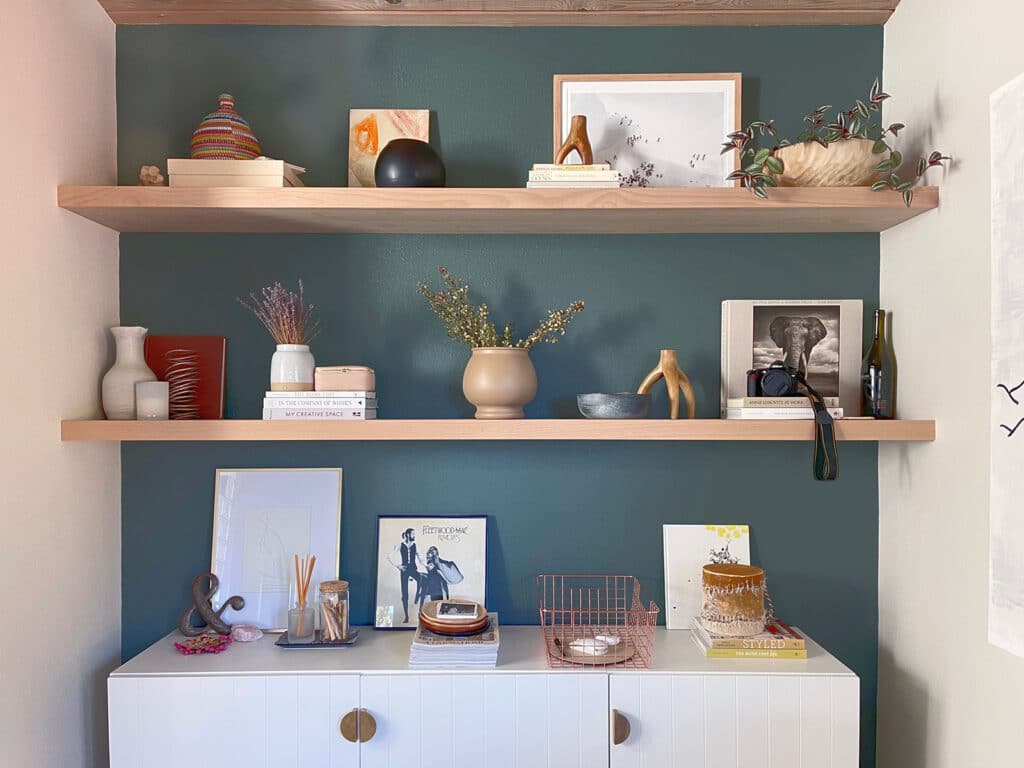 Despite the challenges of renovating during chaotic times, each design choice was a blank space for her to unleash her creativity. A faux marble writing desk takes up less visual space, while a wall sconce from Etsy keeps the desk more minimal. “No lamps or cords!,” she boasts. Adding personal touches, such as the large painting done by Erin herself, with help from her kids who painted the background texture, conjures relaxing images of past trips. While many newly remote workers are discussing how to balance work and life in the same physical space, she seems to have found the balance. Turns out, the secret may be to carve your own little world right in the middle of it all.

We are no strangers to DIY home renovations at Semihandmade. After all, that’s where the idea for making doors for IKEA kitchen systems came from. So naturally, we had to dedicate an entire section of SemiStories to celebrating our design community’s ingenuity, from DIY kitchen ideas to thinking of smaller details like rattan glassware and easy-to-make wall hangings. Don’t just take it from us: we’ve tapped the best in the business. Anita Yokota shared her best trick for a $20 bathroom renovation, Jessica D’Itri Marés shared her favorite spray painter, and Jenna LeBlanc showed us how to give wall-to-wall storage a custom touch. Maybe you’re just dipping your toes in the world of do-it-yourself, in which case we recommend starting small: try your hand at making your own speckled candle holders, for example, or give your greenery an updated home with pretty stacked planters. If you have a handy side (maybe you’ve put together DIY kitchen cabinets or are not afraid to use a power tool), we have projects for you too: painting a hand-painted mural is a fun way to give your favorite room some life or maybe you’re game to try putting together your own TV cabinet like Sarah Sherman Samuel did (PS: she saved thousands in the process). Experts, we’ve got you covered too: from learning to tile and grout your own backsplash to painting your cabinets without a hitch, we have plenty of DIY kitchen renovation ideas to keep you busy. We don’t stop at the kitchen either: from wall-to-wall media centers to fluted doors made for playroom storage, you’ll find ideas to improve every room in the house