A “hoarder’s paradise” isn’t exactly what would draw most people to purchasing a home, but that’s exactly how Annette Vartanian described her 1959 Pasadena ranch on day one.

“I saw past all of the junk,” says the A Vintage Splendor blogger, who bought the midcentury house in 2013 from the original owners. Vartanian ignored the decades of clutter (including a random bed in the living room). It had something most other homes didn’t: untouched period character.

As soon as she walked in, she had a vision: to keep as much of the period detail as possible while updating the house for modern life. Vartanian, a self-proclaimed maximalist, is known for her love of color, pattern, and secondhand treasures, so finding a balance of retro flair and contemporary convenience was almost second nature. 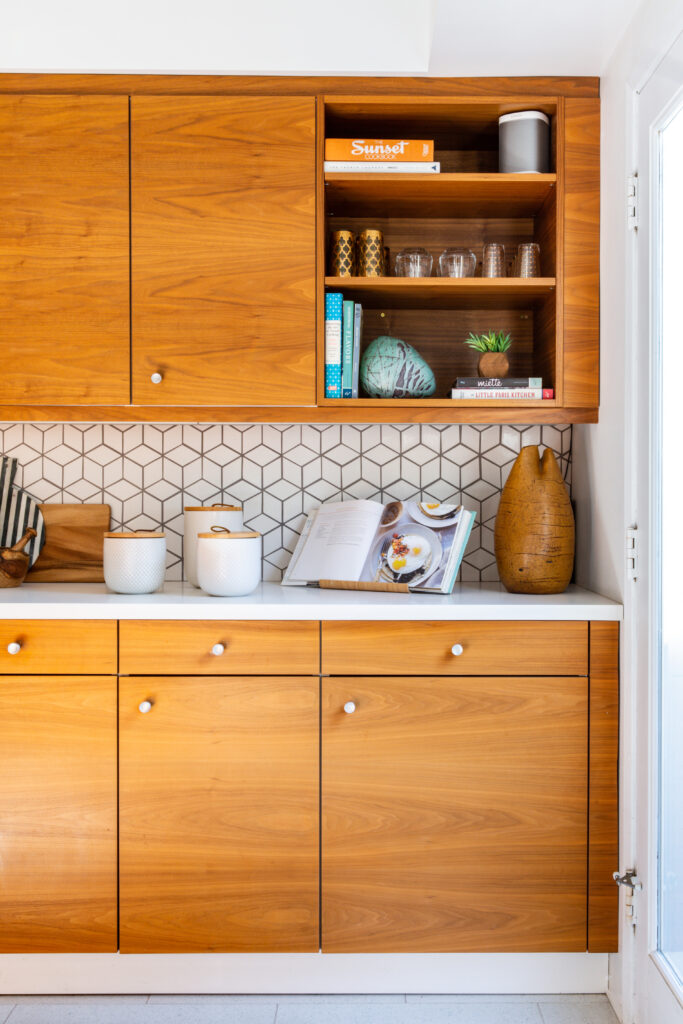 The most obvious nod to the mid-century roots is the kitchen, where Vartanian was forced to replace the moldy cabinets with IKEA cupboards and Semihandmade fronts in a rich, warm wood that was a close match to the original doors. She paired them with a geometric Escher tile backsplash, one of her biggest splurges. “We figured we would spend the money on what’s at eye level and saved on the terrazzo-like quartz floors,” she explains. 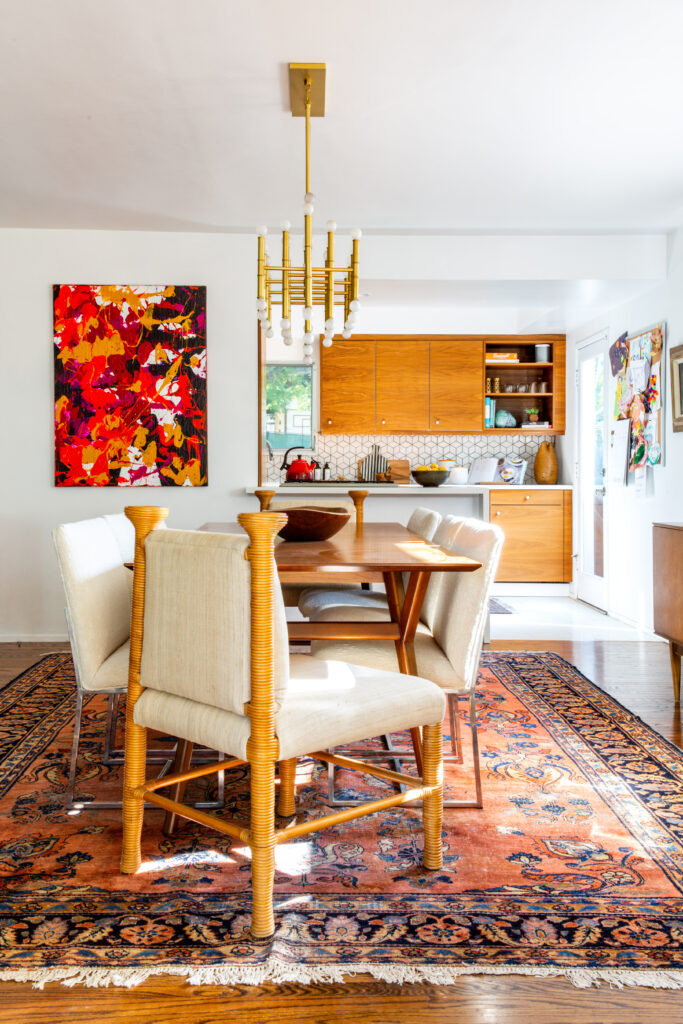 Vartanian knocked down a wall to connect the kitchen to the dining room, creating an open floor plan and her ideal entertaining venue (for post-pandemic socializing.) To furnish the space, she adhered to her cardinal rule: shop vintage as much as possible. The result is an eye-catching combination of 80s chrome and cream chairs, an antique Persian rug, a sculptural Jonathan Adler chandelier, and a West Elm table that Vartanian chose for its length. “When you’ve exhausted all your options, then it’s best to go the new or custom route,” she says. 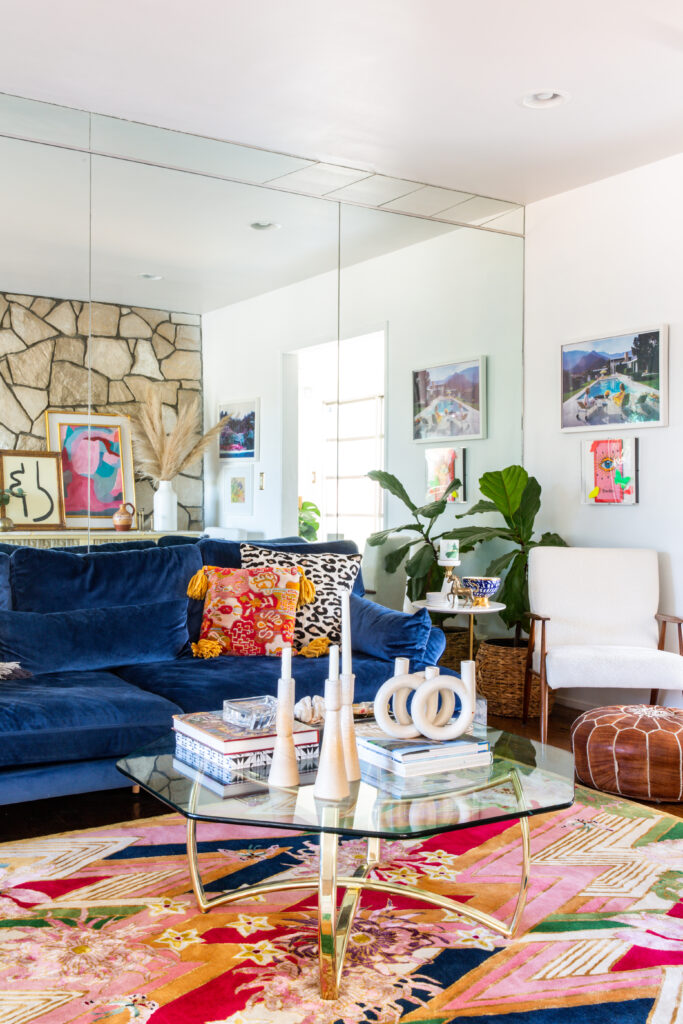 Vartanian followed the same principles in the living area on the other side of the original stone fireplace, where an original mirror wall serves as a backdrop for a floral Wendy Morrison rug, a vintage glass and brass coffee table, and a blue velvet custom sofa ordered especially for stretching out and relaxing. “I think the best advice I have for decorating is to mix styles and eras,” she shares. 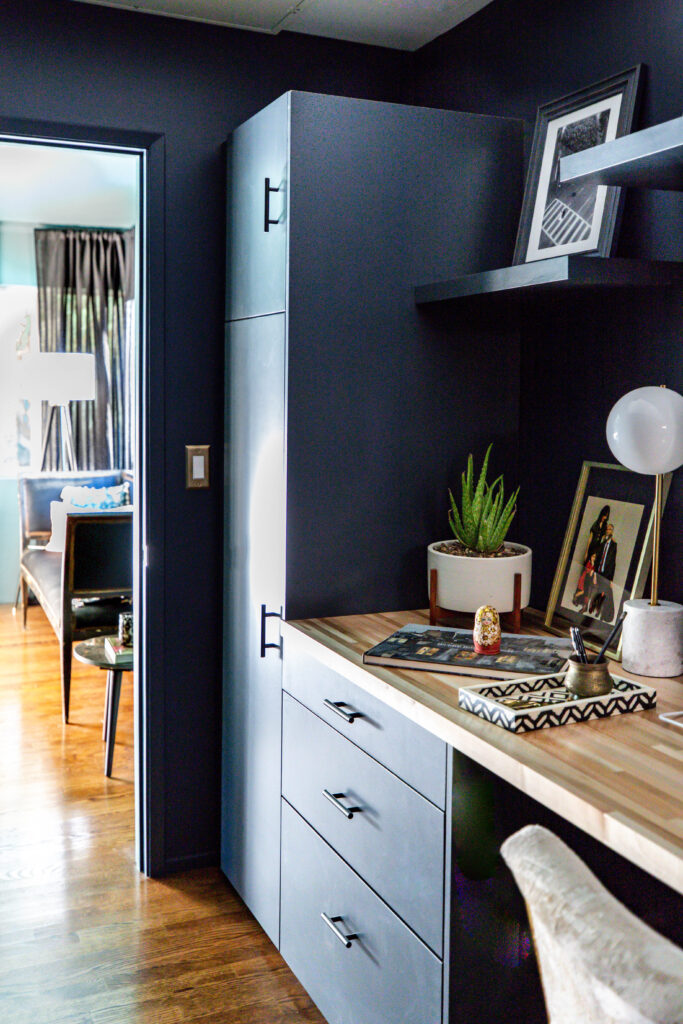 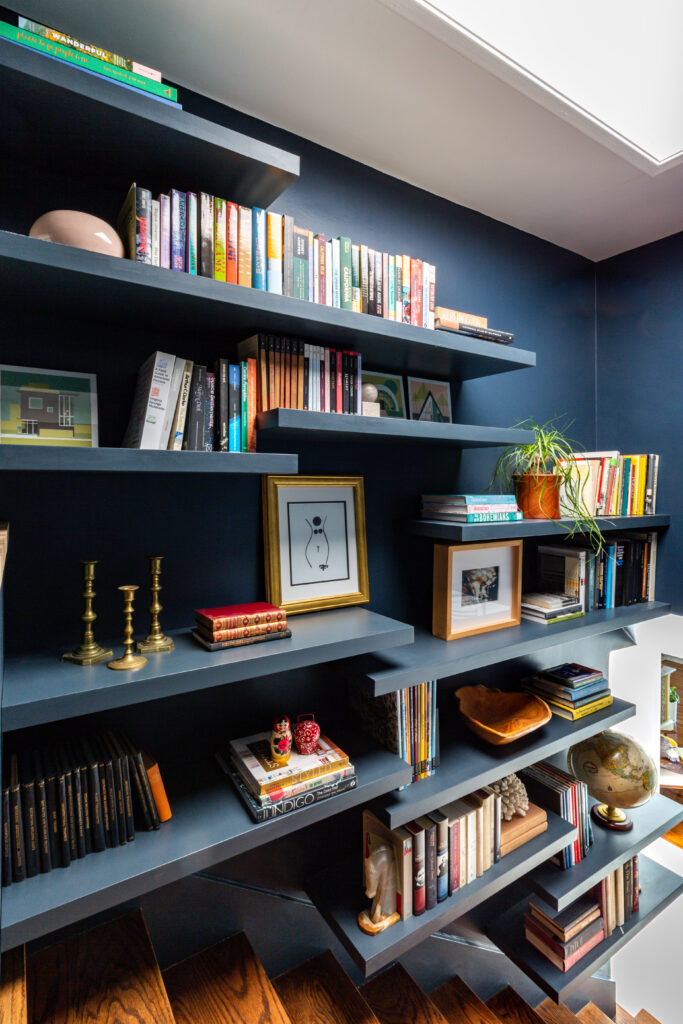 The second floor is Vartanian’s moody lair. It starts with a monochromatic deep sea-hued library, where she installed a grid of Semihandmade DIY Slab Floating Shelves that rises with the steps and displays her husband’s extensive book collection. The study on the landing is centered around a desk unit made with IKEA kitchen cabinet bases (which Vartanian picked because they’re wider and taller than the office variety) and topped with Semihandmade DIY Slab fronts. “Everything is the same color because we wanted to give it the space a built-in feel,” she says. 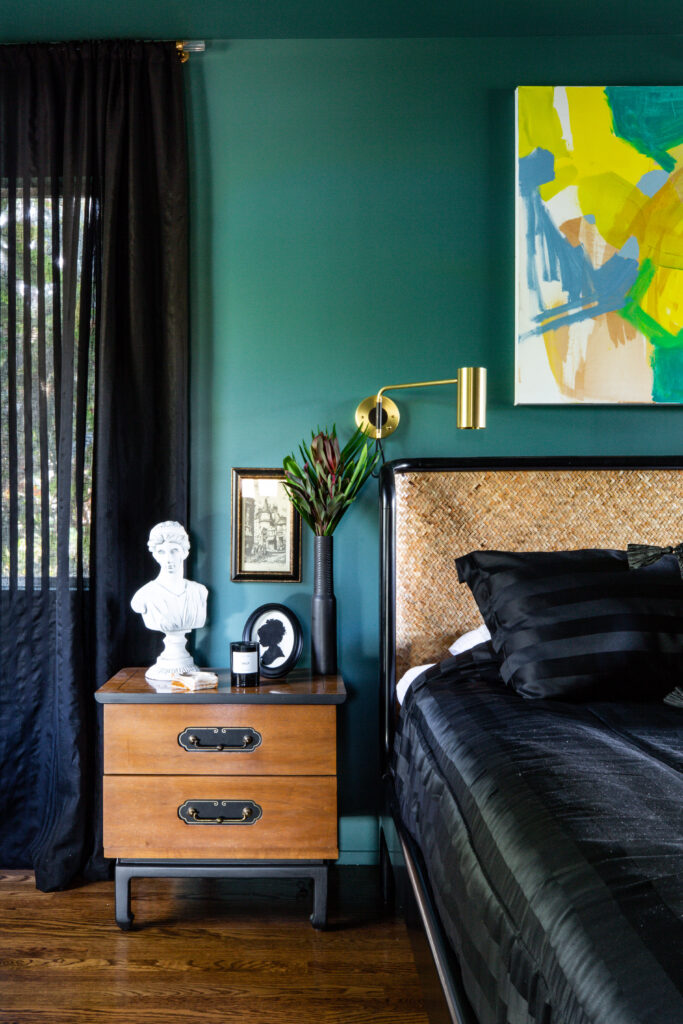 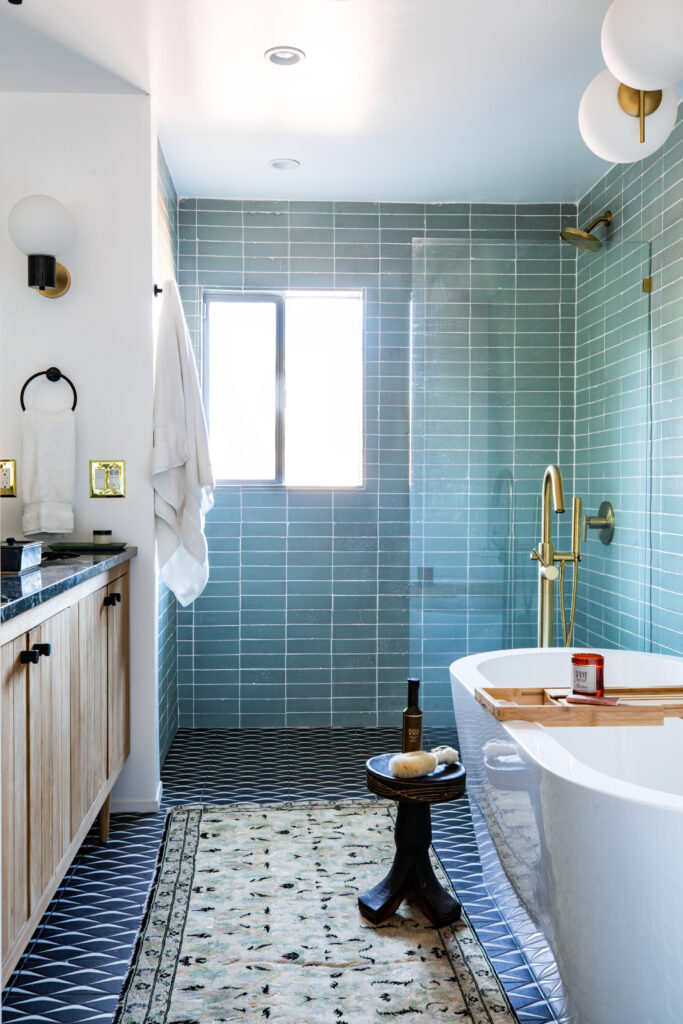 The bedroom is equally dramatic. It’s cloaked in bold teal paint, which Vartanian finds calming and cozy, and peppered with black accents like the rattan bed’s border, a 19th-century bench, and striped curtain panels. However, when it comes to ornamental pieces, like art and pillows, Vartanian prefers to consider the decor a work in progress. “Spaces should always be in transition,” she urges. There is always an opportunity to improve. 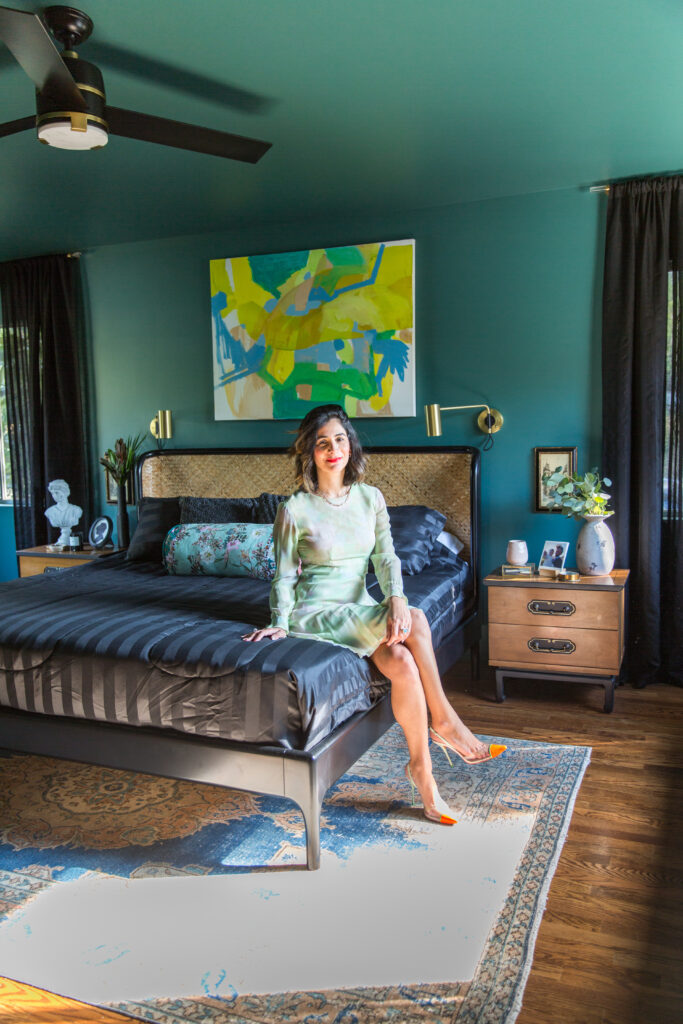