Designer Nick Spain and his husband, Michael Bolognino, scoured the Catskills and Hudson Valley for months in search of a weekend escape from New York City.

In the end, it’s an 1850s Italianate mansion in the Berkshires—far from their target area—that drew them in. The six-bedroom fixer-upper had been uninhabited for four years before the couple came in to take on the gut work and turn it into The Filomena, a vacation rental named after Bolognino’s Sicilian grandmother.

Though the 4,500-square-foot space wasn’t in great shape—it was raccoon-infested, for one—Spain recognized its potential. He saw past the layers of unfortunate, mid-century linoleum installed by the family of 14 that had lived there.

Once a Catholic church rectory, the forgotten home’s period details and rich past were priceless: original wood floors, paneled ceilings, and ornate moldings were preserved throughout. The house required a serious overhaul to become inhabitable again, but Spain made a point to honor its bones and previous lives all the while bringing it into the 21st century: 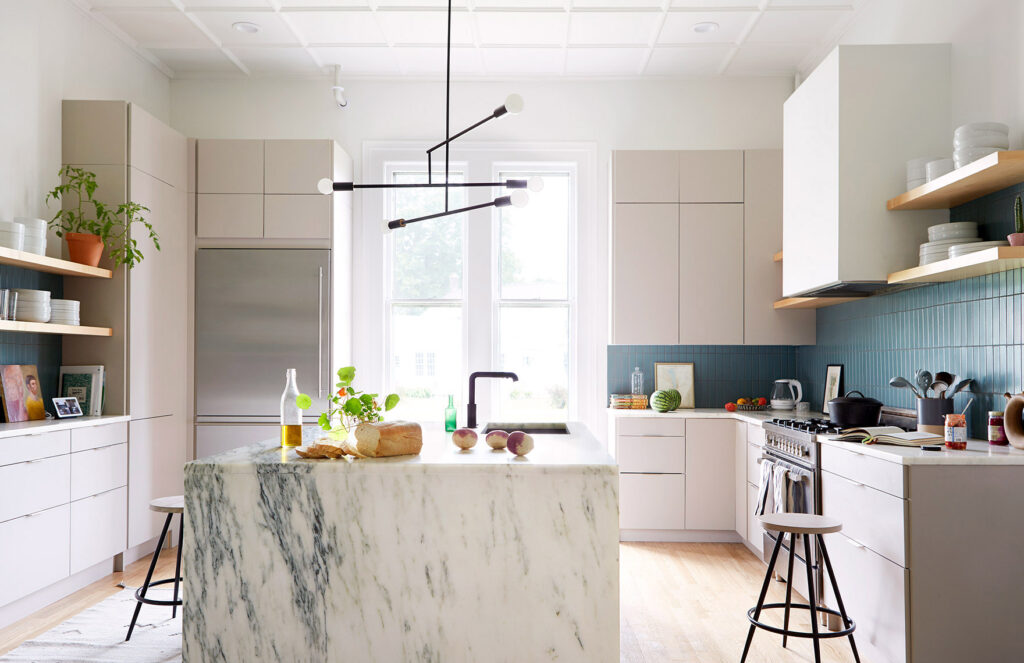 A relic of an era when hired help cooked all the meals in wealthier families, the kitchen was tucked away and closed off at the back of the house. To accommodate a more relaxed, present-day lifestyle, Spain moved it up towards the entrance and opened it to the grand, central hallway. “We wanted it to be in the heart of the home,” he says.

An existing grid-patterned coffered ceiling informed the design: Spain mimicked the geometric gestures above with straight lines, crisp edges, and right angles in the form of Semihandmade DIY Slab cabinet fronts, floating shelves, and a vertical tile backsplash. Sleek Danby marble countertops were crafted out of materials from the town’s old stone quarries. 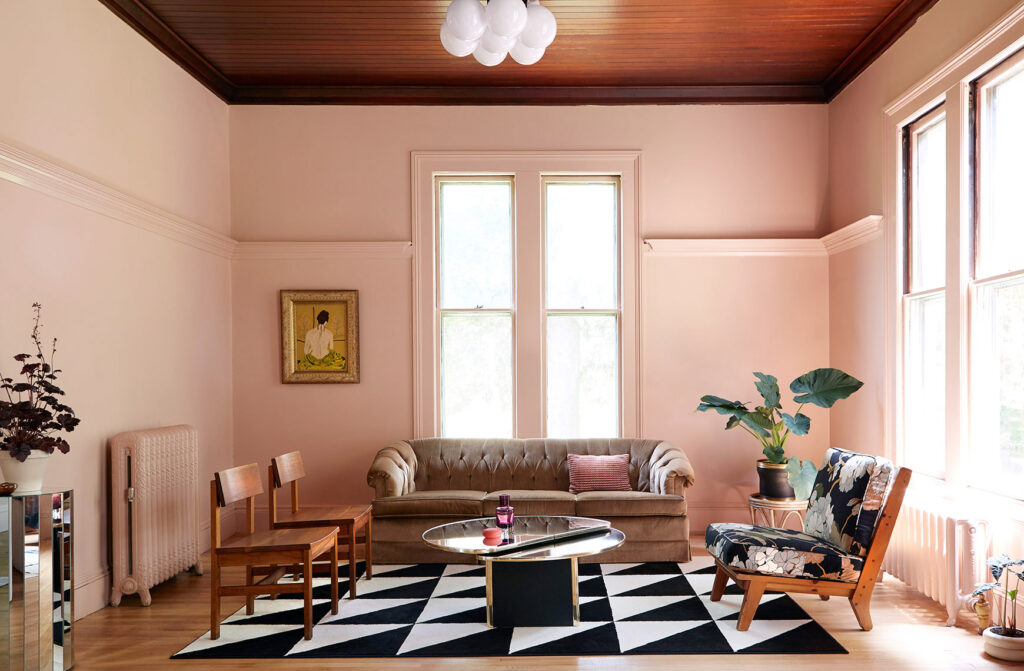 Though Spain opted for an airy, open-plan kitchen, he chose to maintain the rest of the original layout. “The rooms are very sectioned off from each other,” he describes. “Instead of viewing that as a problem, we took it as an opportunity to create these different worlds that you can weave in and out of throughout the day.” 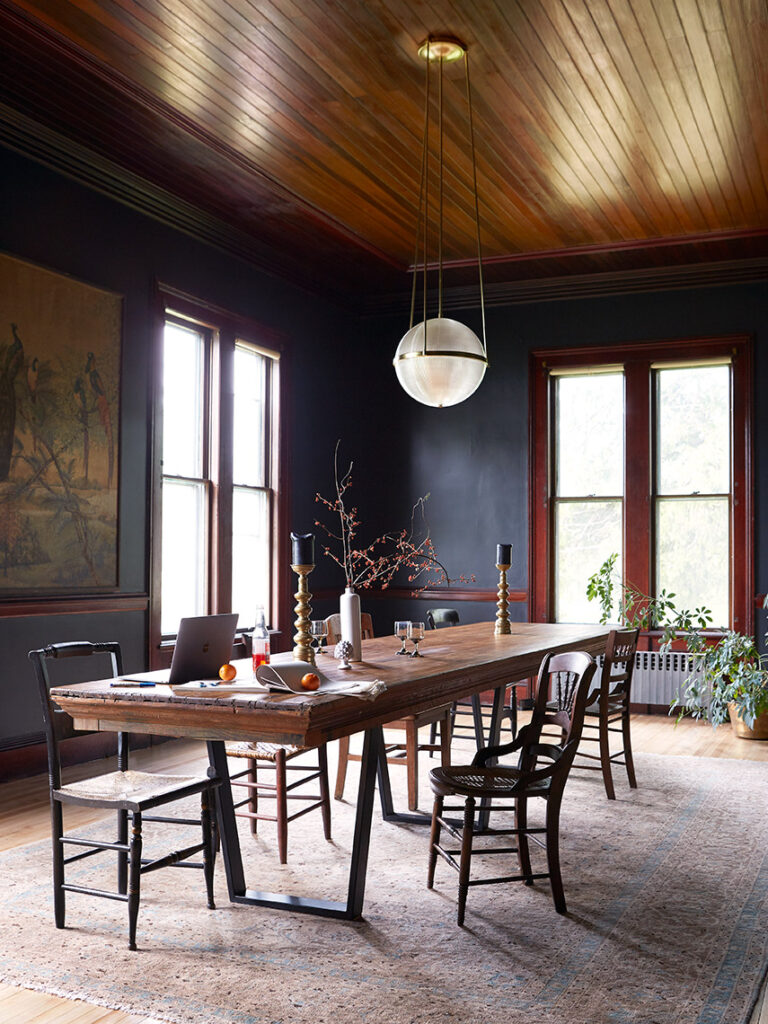 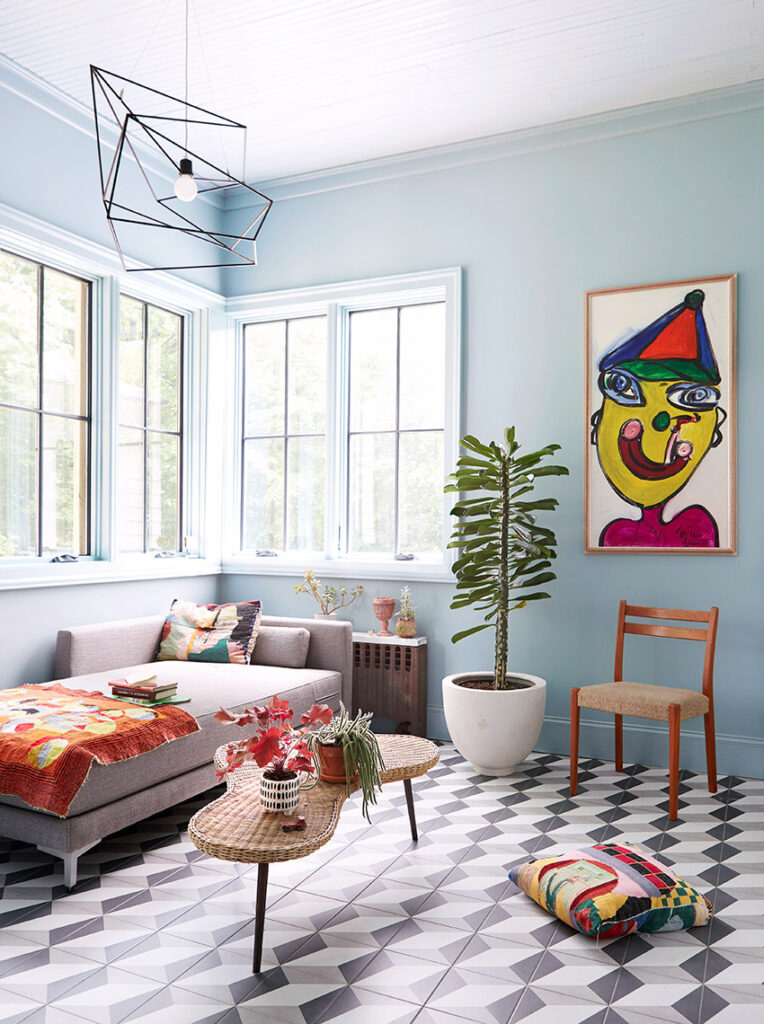 A clown-like painting by Peter Robert Keil gives the sunroom a playful feel.

The warm, dusty pink living room was imagined with “The Ladies Who Lunch” in mind. Intentionally luxurious and loungey, it centers around an inviting Chesterfield sofa and sculptural floral chairs. Meanwhile, the moody dining room provides deliberate juxtaposition with Black Ink by Benjamin Moore paint and dark wood furniture. A playful, baby blue sunroom receives ample southern exposure, so the couple filled it with potted plants and illusionary cement tiles. 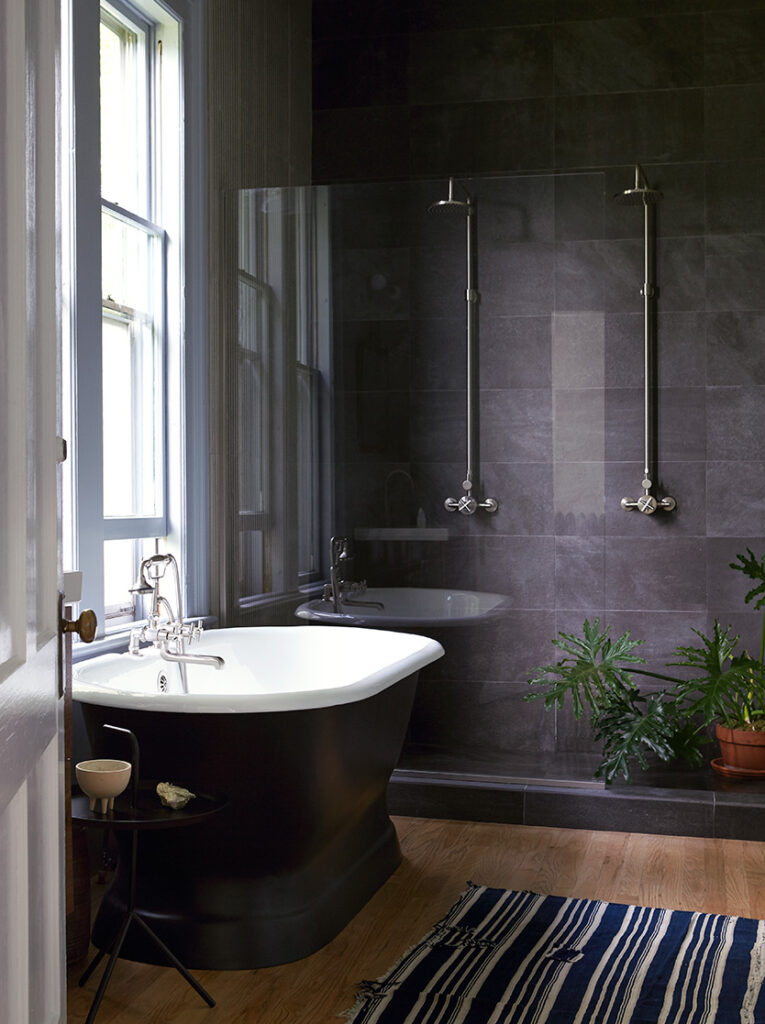 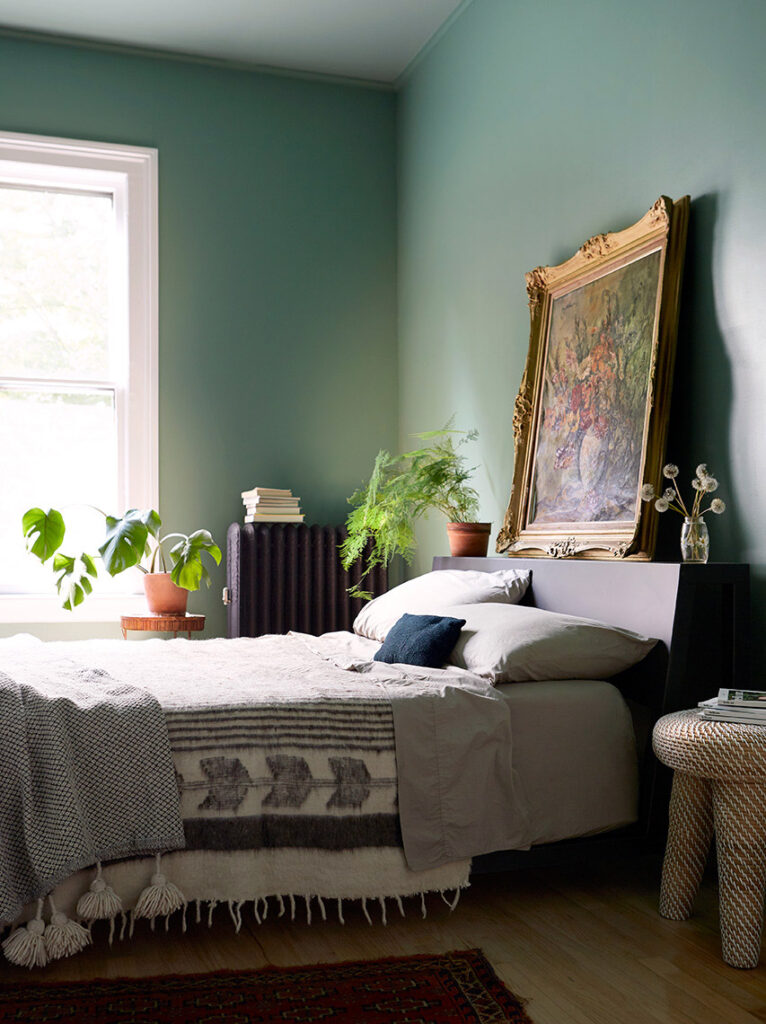 Upstairs, the sleeping quarters are equally individual. The neutral main bedroom, with its vintage hemp rugs and ivory linens, was inspired by a Georgia O’Keefe exhibit at the Brooklyn Museum (and the artist’s New Mexico residence). Foliage, spring green walls, and an antique portrait of a flower bouquet make up a jungle-themed retreat.

The biggest of them all is covered in a bright shade of white. “The Zen Room is our love letter to Donald Judd and the fact that I spent a lot of time in Marfa in my early 20s,” says Spain, a Texas native. The minimal decor includes an ethereal dividing curtain on a flexible, medical-grade track that offers intrigue and privacy. 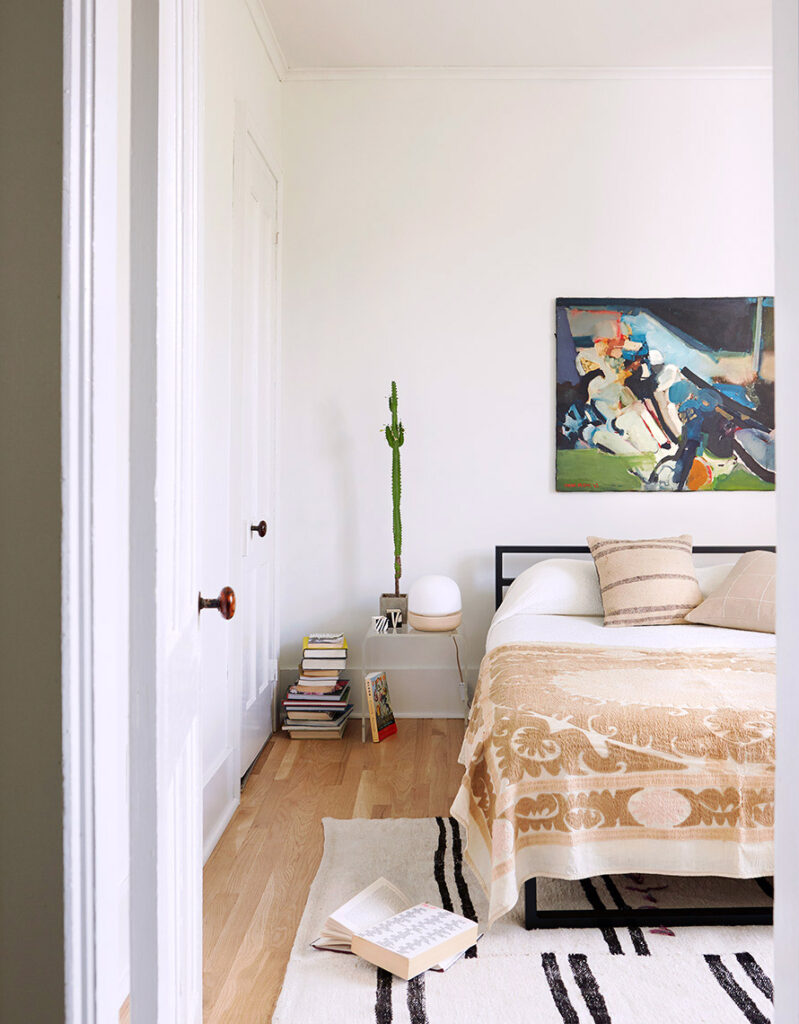 There is one element that the bedrooms have in common: all of the beds are low to or directly on the ground. Not only does Spain prefer to sleep this way (he meditates and feels more secure close to the surface), but he also wanted to accentuate the 12-foot-tall ceilings. “It makes them that much more dramatic.”