After a decade in her Amagansett house, Athena Calderone was itching for a kitchen update.

The author and interior designer behind lifestyle site EyeSwoon first renovated her kitchen when she bought the mid-century abode in 2009. She and her modernist architect neighbor Paul Masi worked together to gut, expand, and integrate the once-moldy kitchen into the main living area, opting for reclaimed wood and dark basaltic lava stone as the primary materials.

Though the finishes were a chic, trendy upgrade at the time, they felt outdated and overly moody 10 years later. “The kitchen needed some levity,” Calderone says. “I wanted to lighten and brighten the space in palette and energy.” 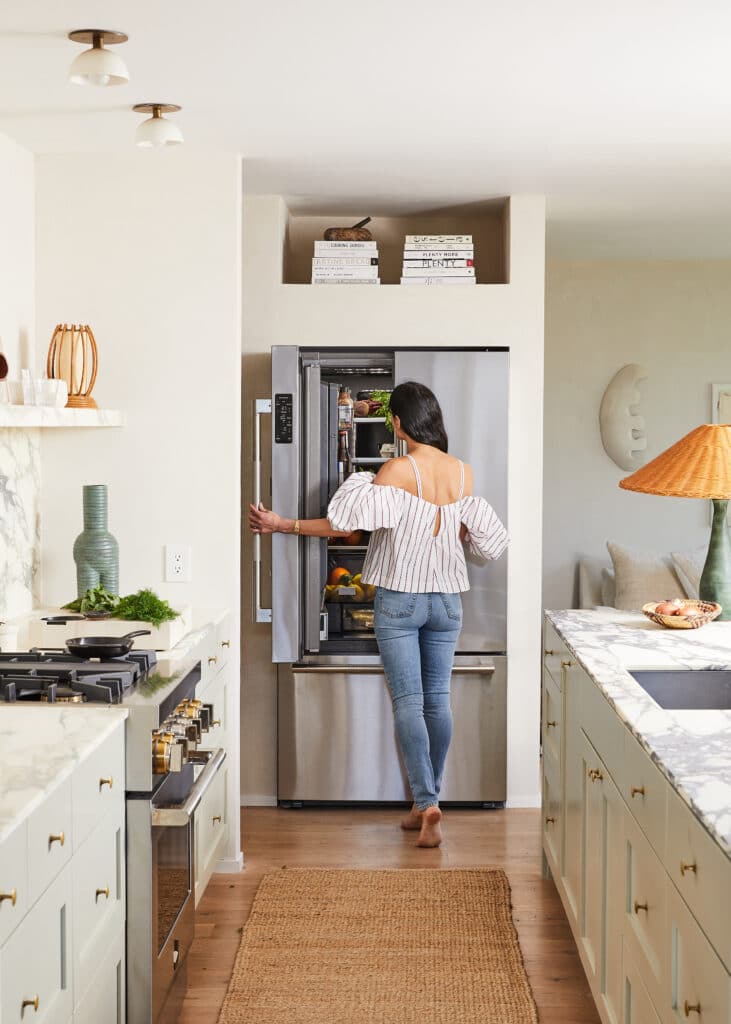 Fortunately, the layout didn’t require any functional changes, so the designer was able to focus her time and money on revamping the look. “I didn’t want to wipe the slate clean and strip the home of its original identity,” she considers. “I just wanted to institute a few small tweaks that would make a large impact visually, but not a large dent in my budget.” 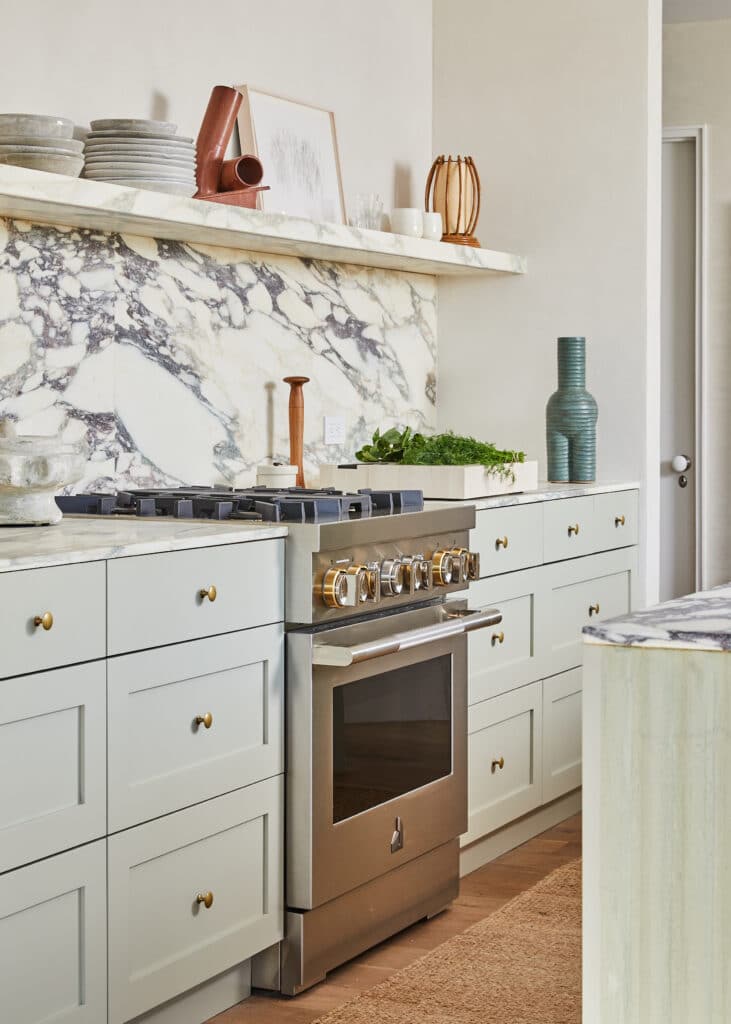 Thanks to existing IKEA cabinets, Calderone was able to use Semihandmade DIY Shaker panels for a quick and affordable door switcheroo that totally transformed the aesthetic. “My husband and I demoed ourselves,” she shares. “We then installed Semihandmade fronts and painted them, which is the greatest choice if you want a refined, custom look within a restrained budget.”

The cupboard doors are adorned with antique brass hardware and covered in Ash Grey by Farrow & Ball, a soft green hue that Calderone also applied to her fluted plaster island. “I wanted to introduce a rough-hewn finish,” she details. “It added both texture and a handmade craftsmanship quality to the kitchen.” 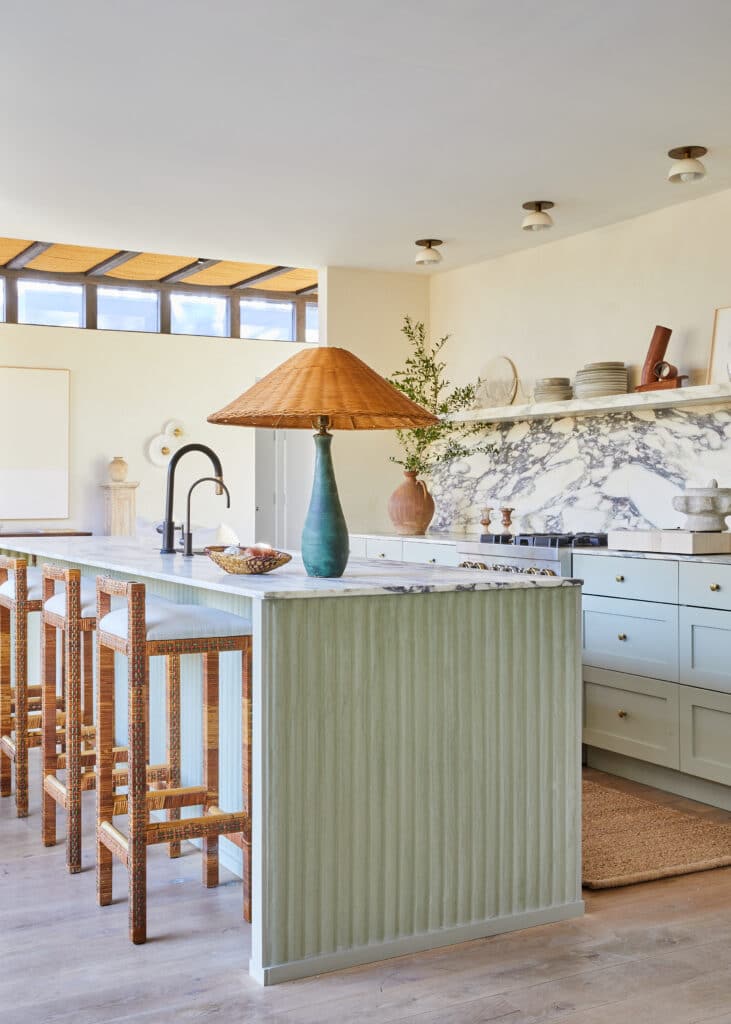 Setting It in Stone

The ridged, organic surface is purposefully juxtaposed with a slick, luxurious Calacatta Monet marble that Calderone sourced from ABC Stone. The graphic, boldly veined stone was fabricated by C&B Marble Corp for the countertops, backsplash, and a wall-to-wall open shelf. “I love it,” Calderone says of the exposed storage. “It’s the perfect marriage of form and function. It allows me to both style decorative objects as well as have my utilitarian pieces within arm’s reach as I cook.” 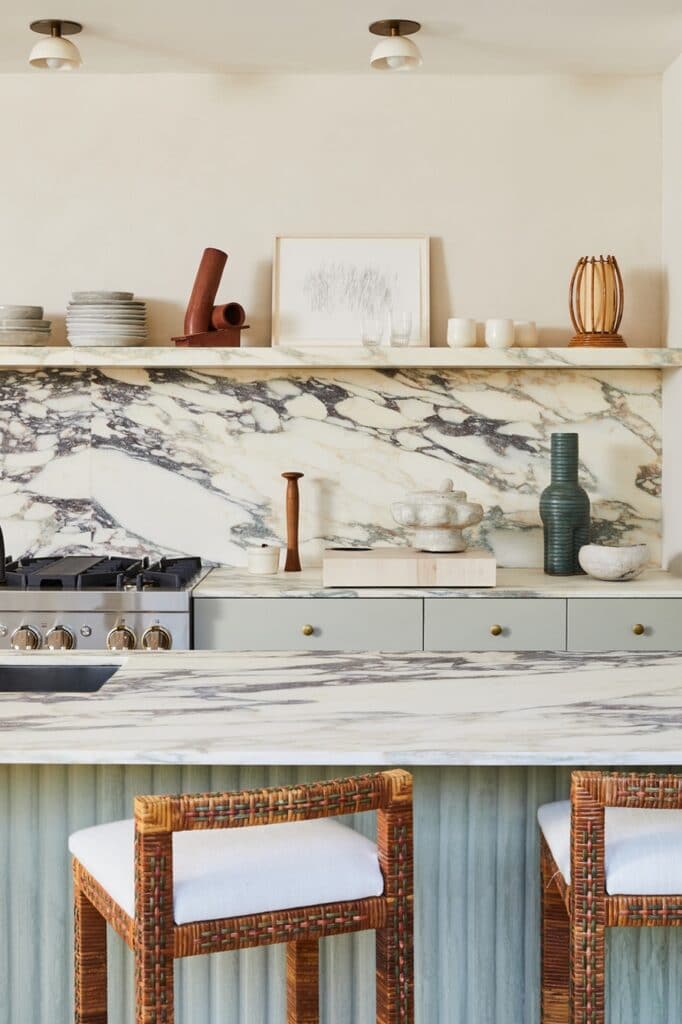 Vintage rattan bar stools from 1970s Spain, a woven runner, and rounded Apparatus Trapeze flush mounts create contrast with the sleek marble, too. “With so many hard, angular lines, I found it essential to introduce some humble, natural materials and soft curves to oppose the rectilinear shapes,” Calderone explains. Her signature curation, as always, achieves a flawless balance.