When her friend of 20 years, who she met growing up Turkey, tapped her to remodel the kitchen in her family’s newly purchased apartment in Astoria, Queens, interior designer Rozit Arditi felt confident. “We know each other so well,” she says. “As I was designing the house, I really felt that, if I liked something, they would like it too.”

This wasn’t the first time the New York City-based designer had worked with the couple; she had previously decorated their old apartment, also in Astoria. But when they bought two apartments with the intention of combining them to create the perfect home for their family, Arditi knew she had a fun challenge ahead. The kitchen, for one, needed to undergo a dramatic transformation. 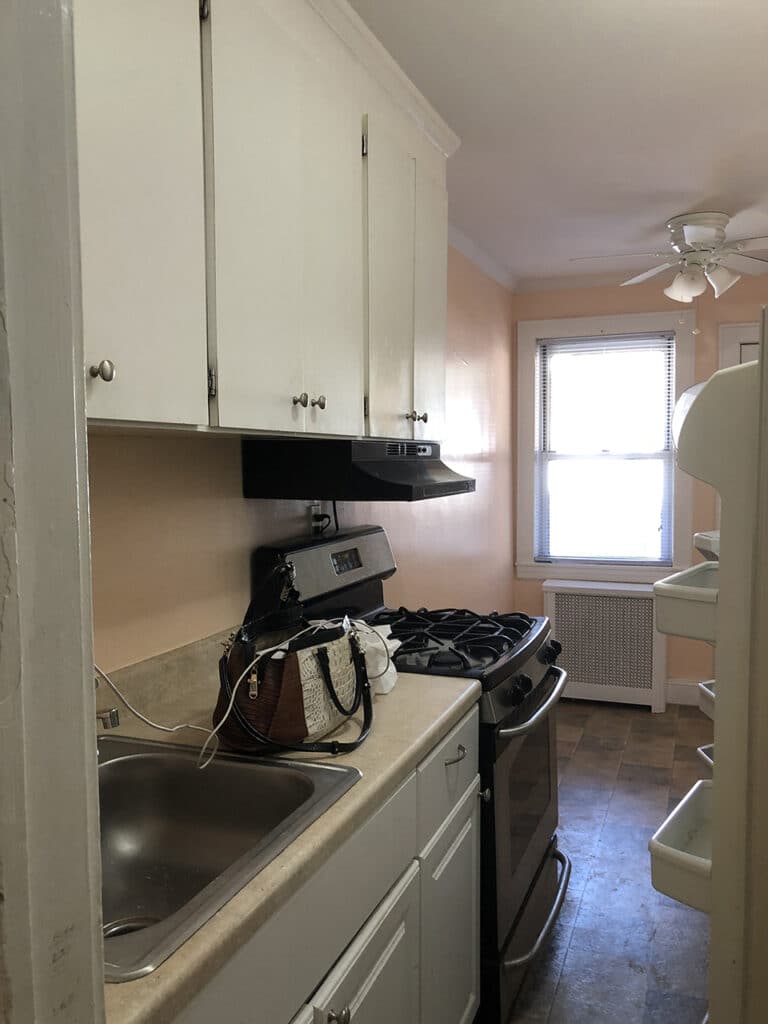 That started by taking down a wall and combining a bedroom with one unit’s kitchen to make a much larger space that could easily accommodate visiting friends and family members for dinner parties and holidays. This decision not only made the room significantly larger, but brighter. The combined rooms had three windows, which Arditi oriented the layout of the kitchen around. “We really wanted to utilize the daylight,” says the designer. 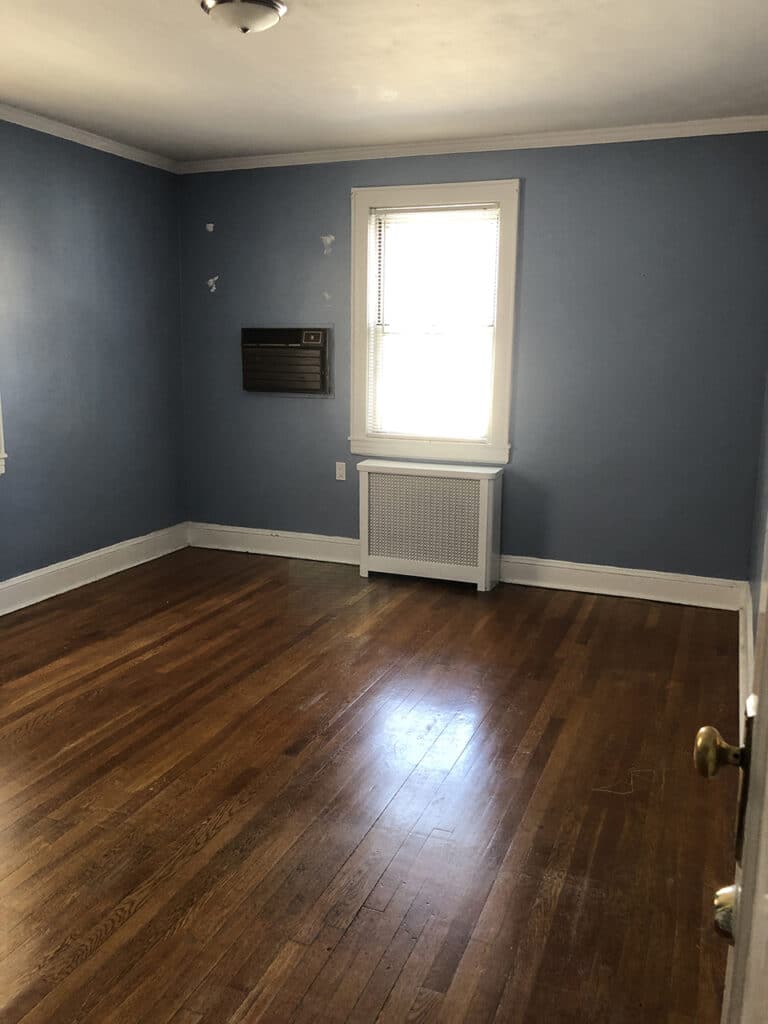 What made the most sensenwas an arrangement with plenty of room to prepare food and to host people. “We knew we needed an island, and we needed additional seating besides what we had in the dining room,” Arditi says. A custom-made banquette by Stitchroom—made using a panel that was originally ordered to stand next to the fridge that happened to arrive damaged—fit the bill perfectly.

While a geometric white backsplash from Tilebar and a white countertop from Caeserstone make the space feel bright, the overall vivid palette of the kitchen infuses it with plenty of energy. “They’re a very colorful couple,” Arditi says. “They wanted the house to really reflect them.” On the walls, Clare’s Headspace, a soft blue-green, and on the ceilings, Clare’s Lemonade, a sprightly yellow, make an unexpected, playful pairing. Semihandmade’s Supermatte Shaker cabinet fronts in Night Sky, a classic navy, pull the two hues together as a not-quite neutral that makes an impact without overwhelming the space. 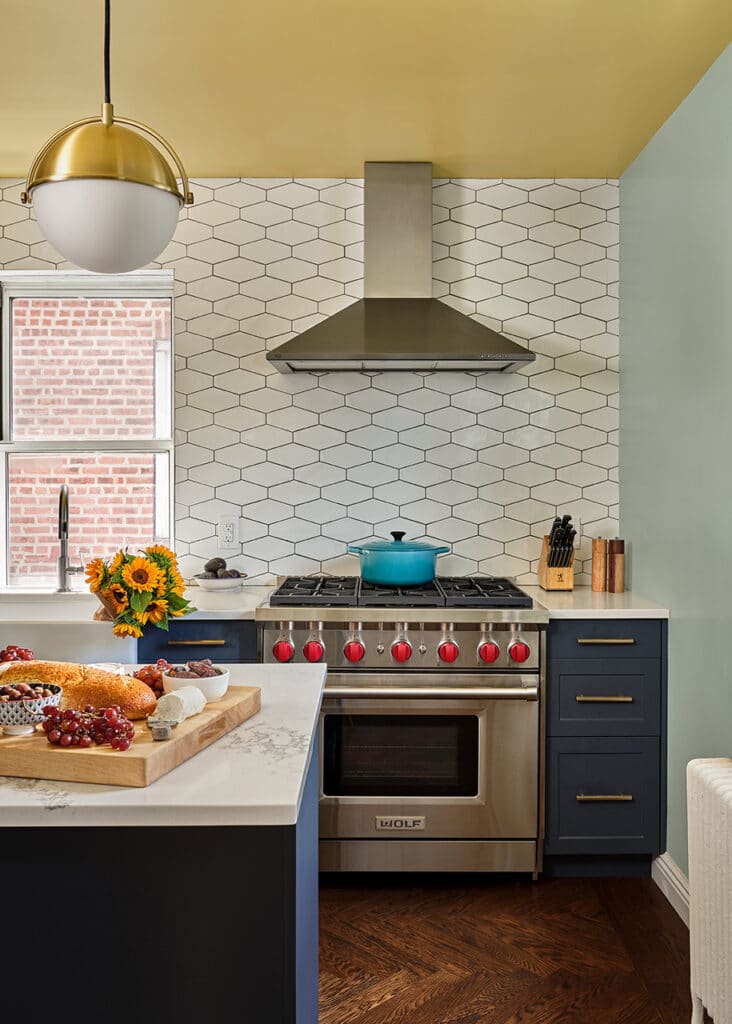 Eccentric pops of color continue in the kitchen’s decor in a durable Moroccan-inspired rug from Ruggable, a multi-hued pendant lamp from West Elm, and a patterned seat cushion for the banquette from Designer Custom Source. A Breville espresso machine and Wayfair chairs also play up the red knobs on the Subzero stove. No detail is too small in this space to go unnoticed. 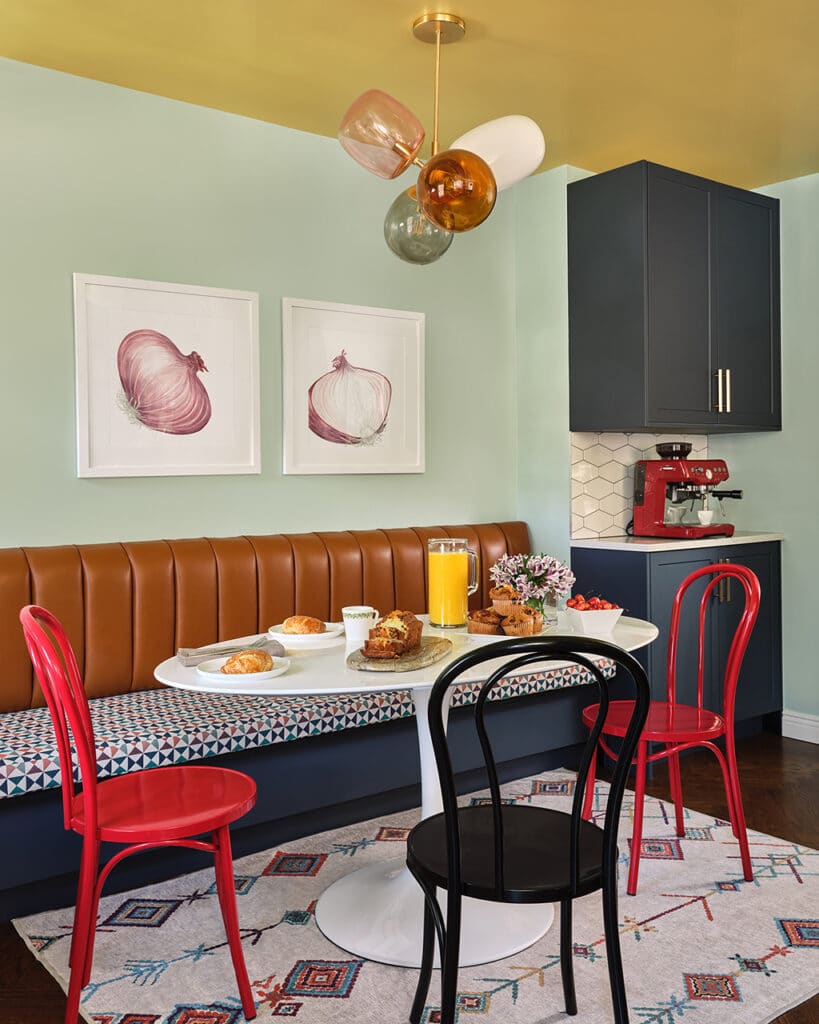 Renovations of the kitchen began in January 2020, but pandemic-related delays made the space ready for move-in by July 2020. However, the wait was well worth it. Arditi says that Semihandmade’s fronts made the renovation look fully custom at a fraction of the cost, and the durability of the room’s furnishings, like the Ruggable rug and the leather-backed banquette, make the space friendly for the couple’s son and the many other little ones that now frequent the room.

“They’ve been in their home for two years, and they’re very happy with how everything’s held up,” Arditi says. “There’s always a lot of people around, and what we wanted was to create a space where everyone could be together.”