When it comes to designing your IKEA and Semihandmade bathroom, there are two options to consider: Godmorgon or Sektion. While Sektion is IKEA’s kitchen system, it works wonders for those wanting a ton of cabinet space or a customized look, while Godmorgon is primarily used in smaller spaces, and for stand-alone or floating vanities. In order to learn more, we sat down with four designers whose Sektion bathrooms max out both style and functionality. 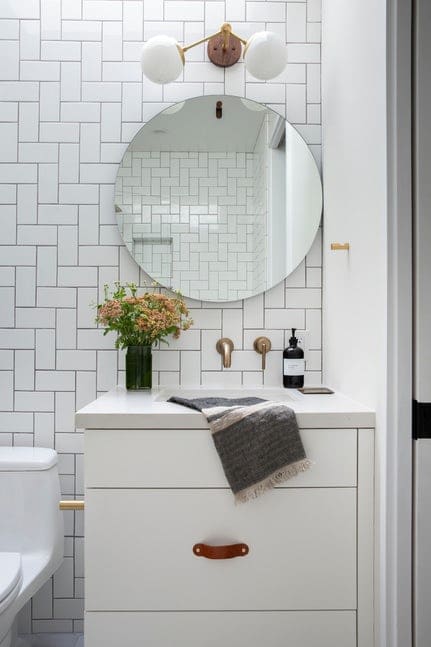 For this Mill Valley, California, chidrens’ bathroom, designer Anja Michals went for a clean palette, unique tile layout, and Semihandmade Supermatte White Slab fronts for a high-impact yet cost-effective reveal. “We were on a budget so we wanted to do it right, and that’s why Semihandmade is such a good option,” she says. And while a white-on-white aesthetic could come across too safe, Cle subway tiles placed in a pattern Michals found on social media, Caesarstone fresh concrete countertops, a Cedar and Moss light fixture, and leather pulls “make it feel more eclectic,” adds the designer. 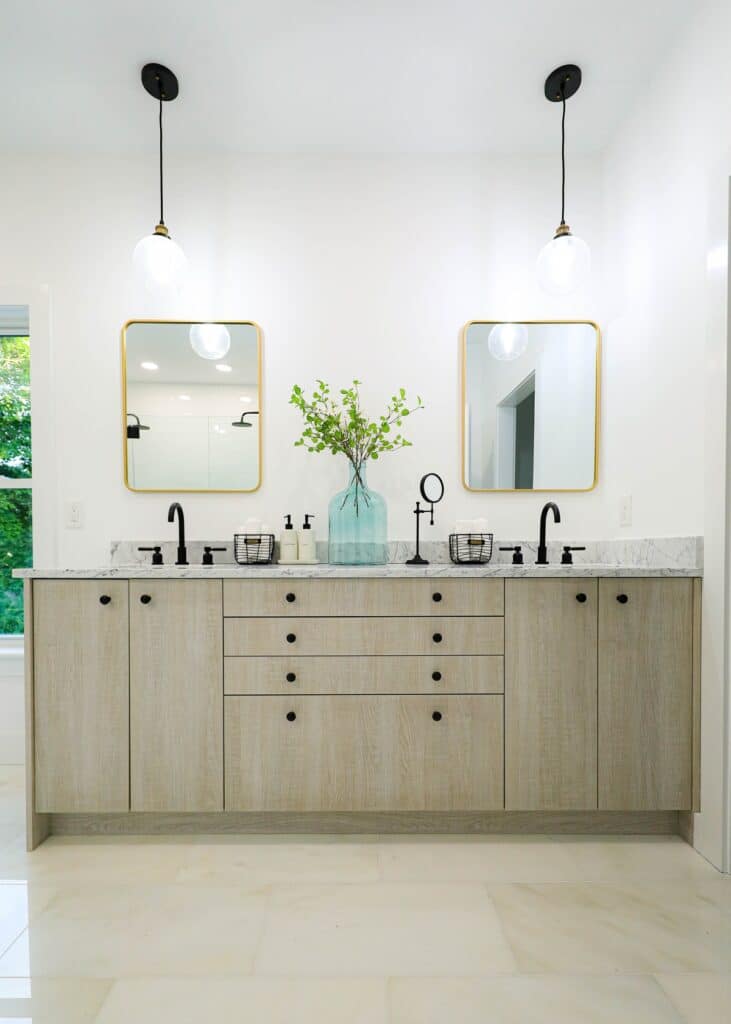 Design and Phography by Doyle Build

“It was a spec house, and I wanted to make it look more custom,” recalls Amy Doyle of Doyle Build. This Grotten, Connecticut, home, features a Semihandmade bathroom with IKEA Sektion bases, a decision that not only saved on costs but made it easier to navigate the extra-long bathroom wall and provided ample storage as Sektion cabinets are deeper than Godmorgon.

Because it’s a primary bathroom, Doyle went for Semihandmade’s Impression Smoke doors, a non-painted textued melamine front that looks like real wood without the upkeep. “Because this bathroom will get so much use, it’s nice to have an option that won’t chip or show wear and tear,” she adds. The doors are paired with a Carrara marble countertop, a rare find with black veining, and Emtek black hardware. When the home sold, the new homeowners were shocked to find out the vanity was crafted with IKEA and Semihandmade. “They thought it was a $20,000 vanity,” Doyle concludes. 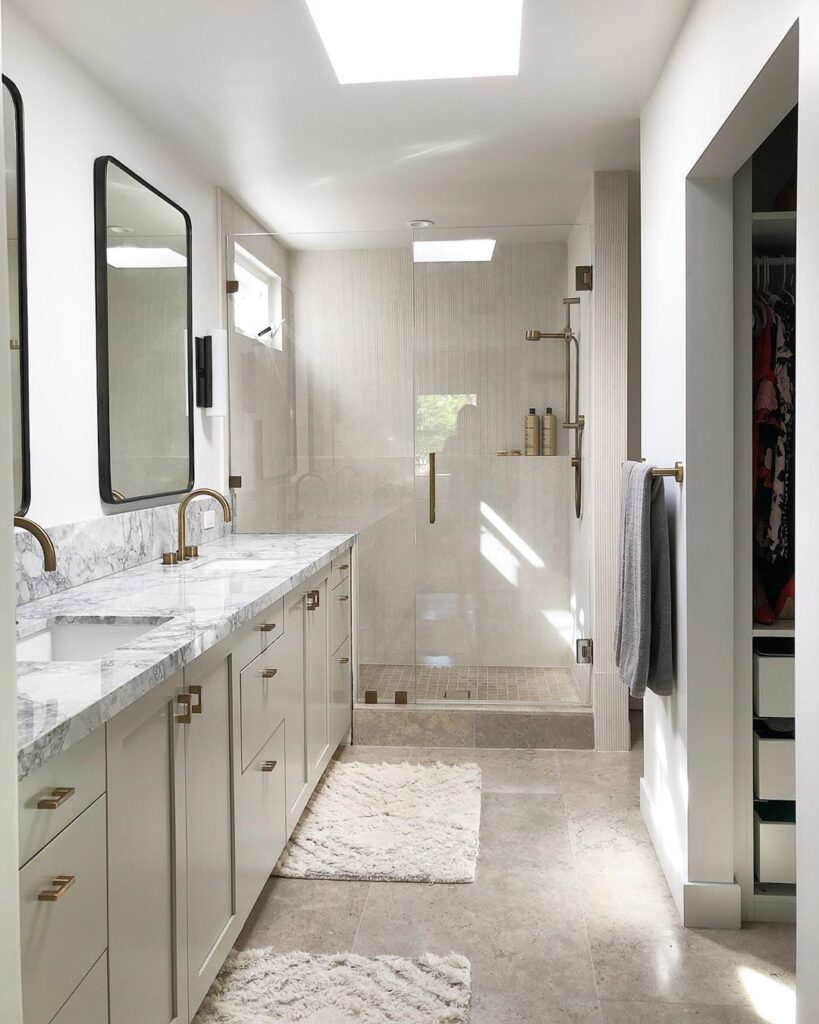 This La Costa, California, bathroom underwent quite the transformation. Pre-remodel, “outdated brown material, heavy wall texture, and a small enclosed tile shower” made it an anxiety-inducing space,” says Christie May of Rockwell Interiors. The new design with a clean, fresh color palette would be the solution, alongside an enlarged, open shower.

May went for a combination of both Semihandmade DIY Shaker and Slab fronts for a custom look. “I like modern, but still wanted a bit of detail on the door fronts,” she says. Sektion bases were also an easy choice because of the added storage, plus because the vanity is 10 feet long, May wanted to break up the millwork design all the way across. Thin five-inch drawers are for makeup and toiletries, while taller Sektion bases “met all of the storage needs,” she says. Antique brass hardware, white quartzite, and warm grey paint finish-off the retreat. 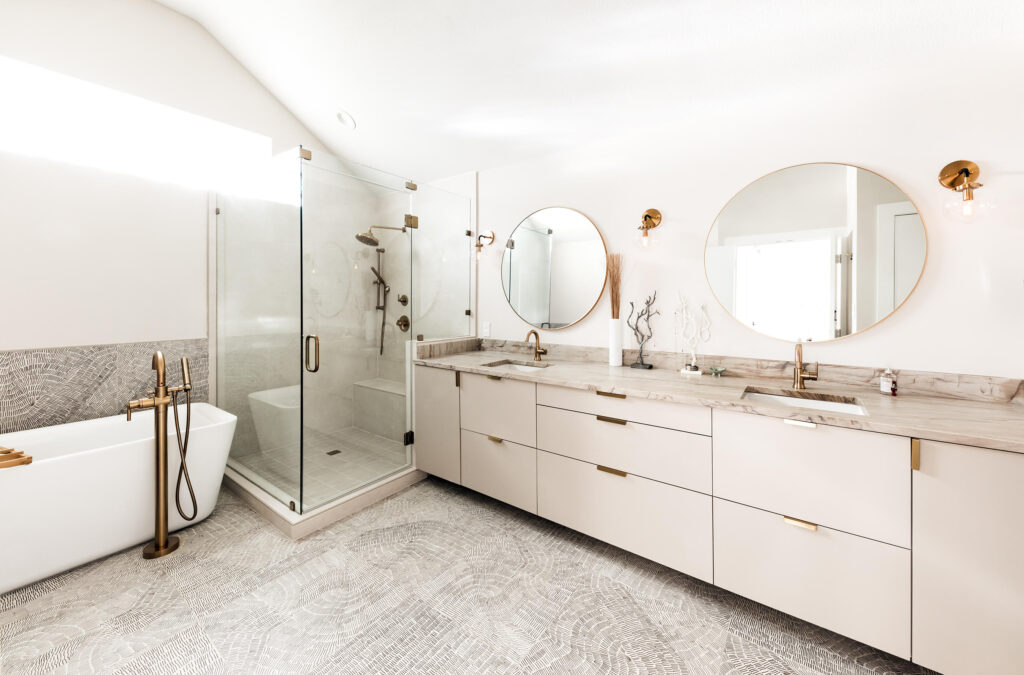 Design and Photography by Terri Glanger

Dallas-based photographer Terri Glanger was desperate to renovate her primary bathroom. It had one long mirror and dated, traditional wooden cabinets. “It might have even had carpet,” Glanger says. “It was pretty bad.”

The main initiative was to bring it up “to the right century and modernize” to reflect her own taste. The tile, a stunning mosaic from Polish designer Kasia Zareba, was the starting point. “I had never seen anything like it,” she recalls. “It’s arty and earthy, and has its own thing going on. It felt a little tribal. If you’re going to do something fun, you might as well do it in the bathroom,” she adds.