Malcom Simmons has always been drawn to design. A graphic designer by trade, he’s honed his eye for interiors over the years. His projects have even been noticed by Emily Henderson. For his latest remodel, a moody, sophisticated  home office, he’s leaned on his education, childhood influences, and knack for DIY to create a space that is both timeless and inspirational.

Simmon’s all-green office was partially inspired by the jewel-toned rooms in D.C.’s National Portrait Gallery. “Saturated green, blue, and burgundy evoke an individuality to each space, but it still feels cohesive,” he says. His office, which doesn’t get much natural light, was the ideal canvas for a a wash of all over color. Henderson also suggested he go bold, using paint as the British do. “Somehow along the way, we decided that trim and doors should be white,” he muses. “By painting everything in this deep, rich green, it’s intimate and inspires me to think outside the box. I’ve been working in here the last week and it has kept my creative juices flowing,” he adds.

But what color should he go with? Farrow & Ball’s Green Smoke was a contender but instead he crafted a custom mix at Home Depot with a Behr Marquee base. While the room is one hue, satin, matte, and flat finishes “create a sense of movement throughout.” 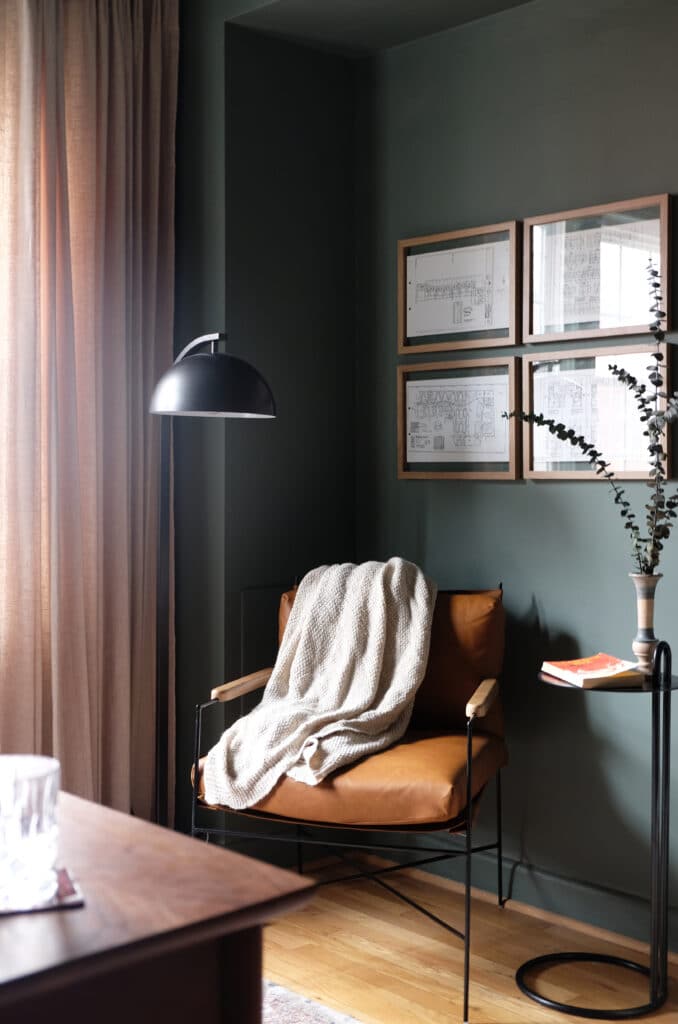 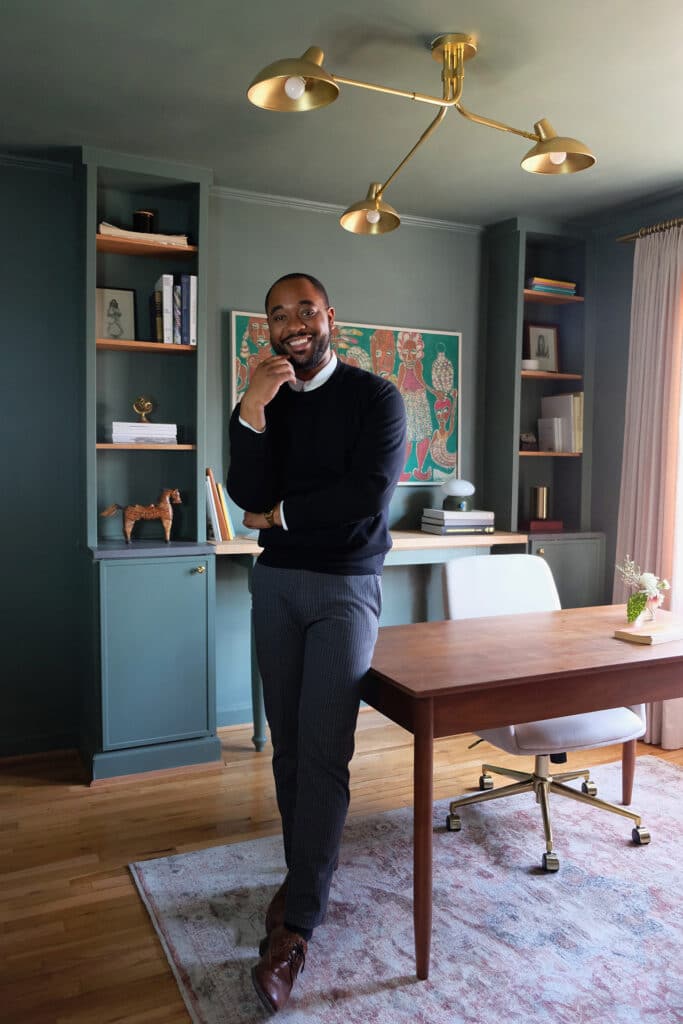 Simmons describes his style as classic and tailored, a fit for the home’s Colonial archiecture, but he also enjoyed challenging the definition of traditionalism within the room’s design. He feels it’s important to consider location, historical context, and more, to craft a scheme that’s personal, as well as surprising.

There’s a neon David, perhaps the most well-known traditional image, of the Western world, a Nigerian batik, a piece that sat in Simmon’s childhood home (he grew up in Nigeria, Honduras, and Brazil) along with vintage neighborhood elevations he found upon move-in. “There’s an interesting dialogue betweedn them,” he says. 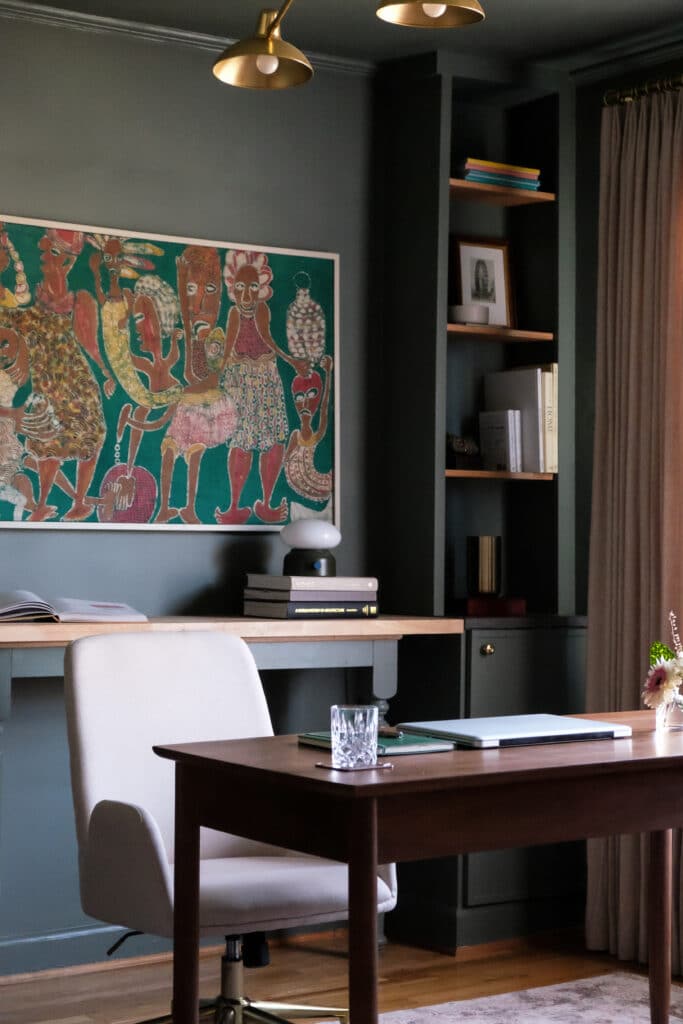 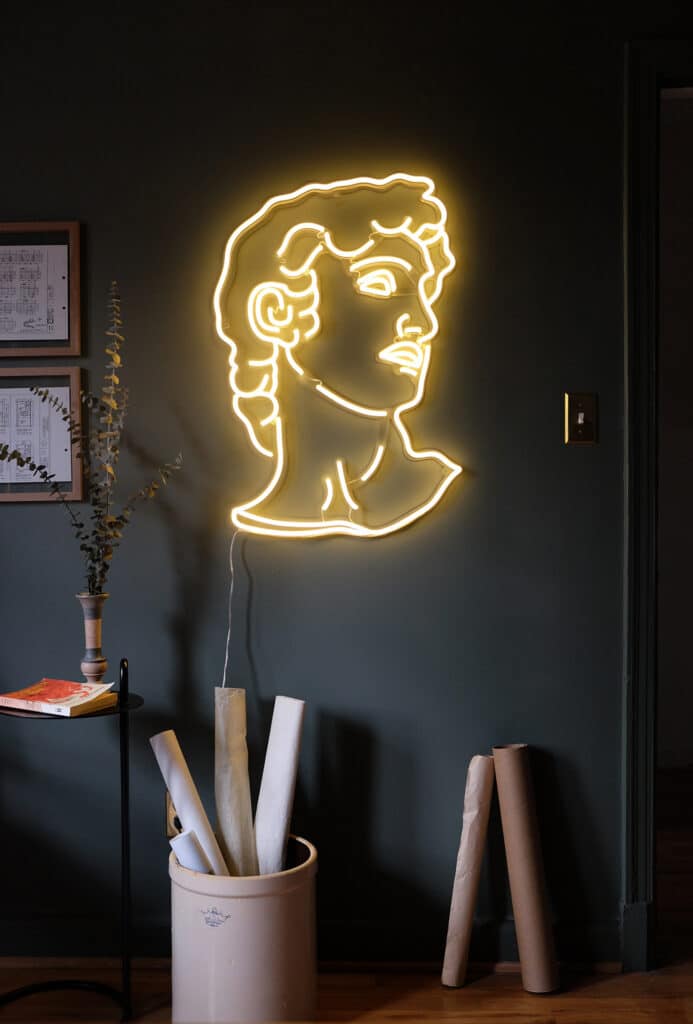 “This was definitely the most challenging space I’ve ever designed or had any hand in designing,” he says. For one, Simmons has never had a home office, so there was a process of figuing out how he worked and what he would need. Built-ins were a must.

Simmons went for Semihandmade’s DIY Quarterline fronts on Ikea Sektion base cabinets, which he lifted and added molding to to match the rest of the home, “a small detail thattruly makes this built-in system sing, and makes everything feel incorporated, intentional, and integrated,” he says. The rest is built from plywood, primed MDF for the face panels, and maple for the shelving. When it came to painting, the easiest part of the project, he used a paint sprayer, something he recommends to negate brush strokes. While the built-ins turned out well, they were difficult to align. “Nothing lines up in an old house,” he adds.

Simmons then DIYed concrete countertops to mimic more expensive soapstone, paying just $30 for both countertops. He used a fiber-encforced concrete mix and black colorant to get it just right. Finally, he built a console table to fill the void between the two bookshelves with a butcherblock countertop, purchased from Home Depot for $100. 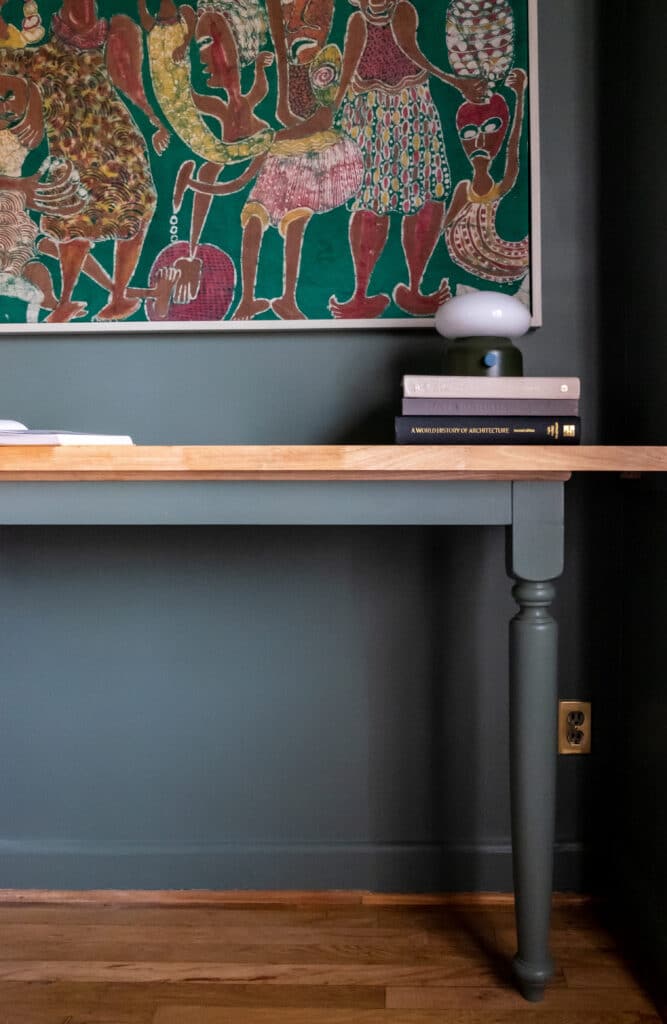 Filling in the Gaps

Simmons completed his office makeover with a barrister bookcase from a salavage warehouse in Maryland, something he calls both studious and utliitarian, the ideal vinage touch to the space, a  Lulu & Georgia rug, Rejuvenation chandelier and desk, Target leather chair, and impressive floral arrangement. 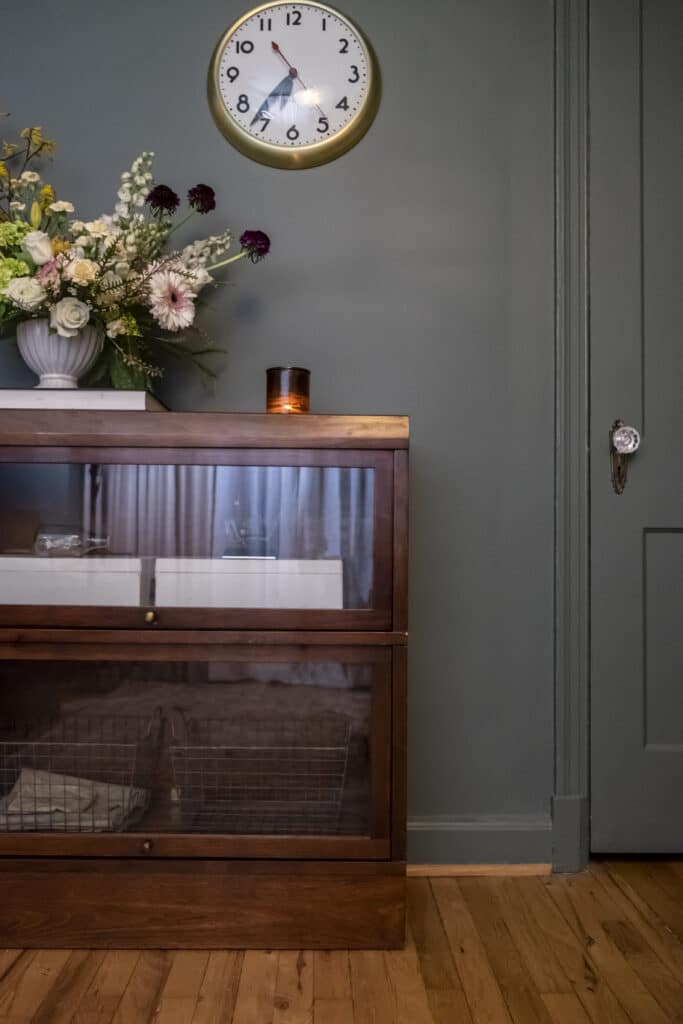