Wichita’s College Hill neighborhood is overflowing with historic homes. A mix of Italianette, Tudor, and American Foursquare architecture, as well as the Allen-Lambe House, one of the last Prairie-style homes designed by Frank Lloyd Wright, make it a stand-out place to live.

Designer Jennifer Farley of Midwest Eclectic got the opportunity to preserve a piece of the past when hired to revamp a Tudor-style home. “The house was most likely built around 1930, but we don’t have any documents. We just had to go off of the general history of the neighborhood,” she says. 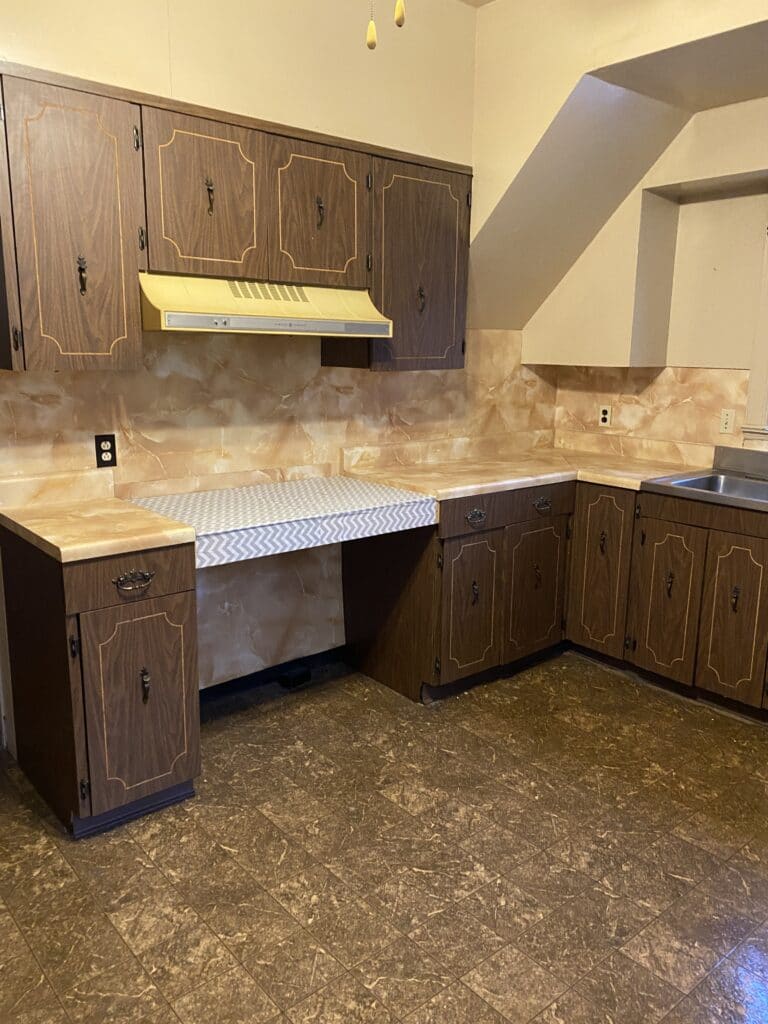 The client, “a single, young grandma” as Farley describes, purchased the home during the pandemic, and was connected to Farley, and her husband, Lee, through her real estate agent.

The renovation, which began with painting and rewiring, also included a refresh of the home’s lone bathroom, in an effort to make it updated and cohesive.

Relics of the Past 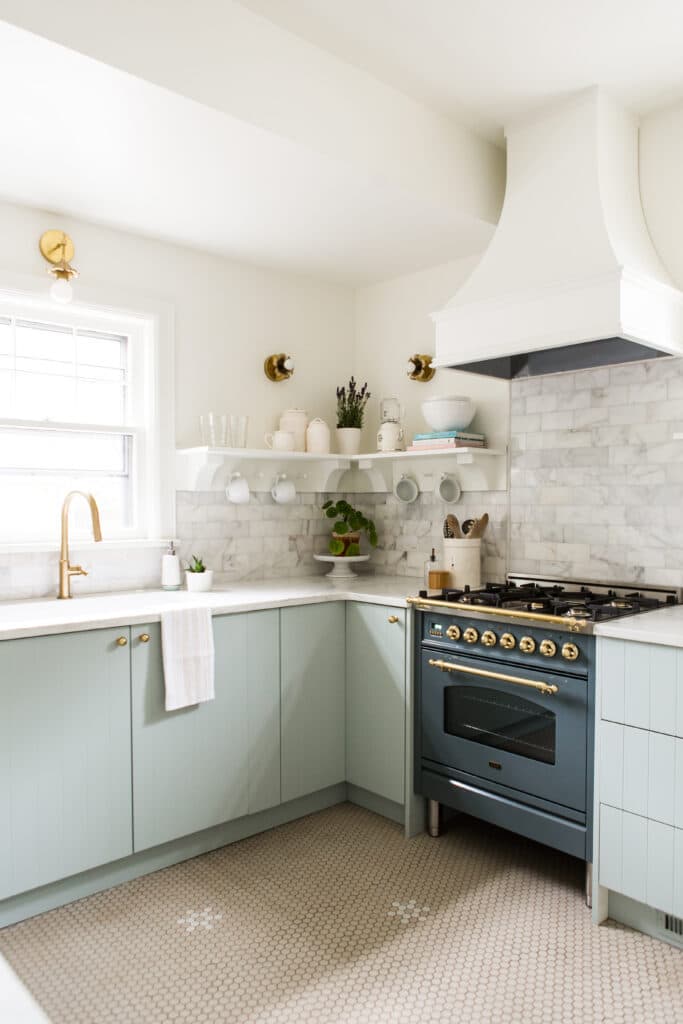 “When it comes to my design style, I’m not a purist,” Farley says.” “I like to give it the character of the home and keep what we can.” The kitchen was renovated in the 1970s and hadn’t been touched in 50 years, plus “it was very closed off.”

Metal boxes with laminate fronts, unglued vinyl sheet flooring, and wire shelves, which made it hard to store anything, had to go, and were replaced with IKEA bases, Semihandmade SSS Beaded fronts, and luxe lighting, while historic-style tile flooring and an original glass hutch add a charming touch. 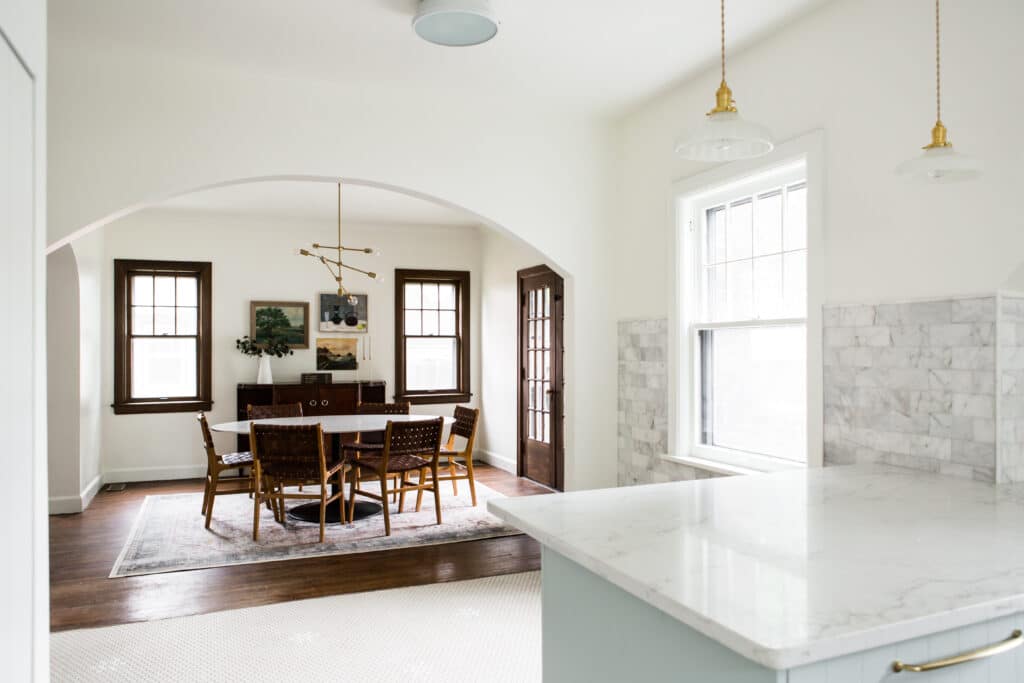 The homeowner has family in the area and was happy to downsize, but still wanted the kitchen to be functional for both cooking and entertaining. Plus, there’s a large French door off the kitchen leading to the pool, which regularly welcomes an array of grandkids, friends, and neighbors, so tile over wood floors was an obvious choice. 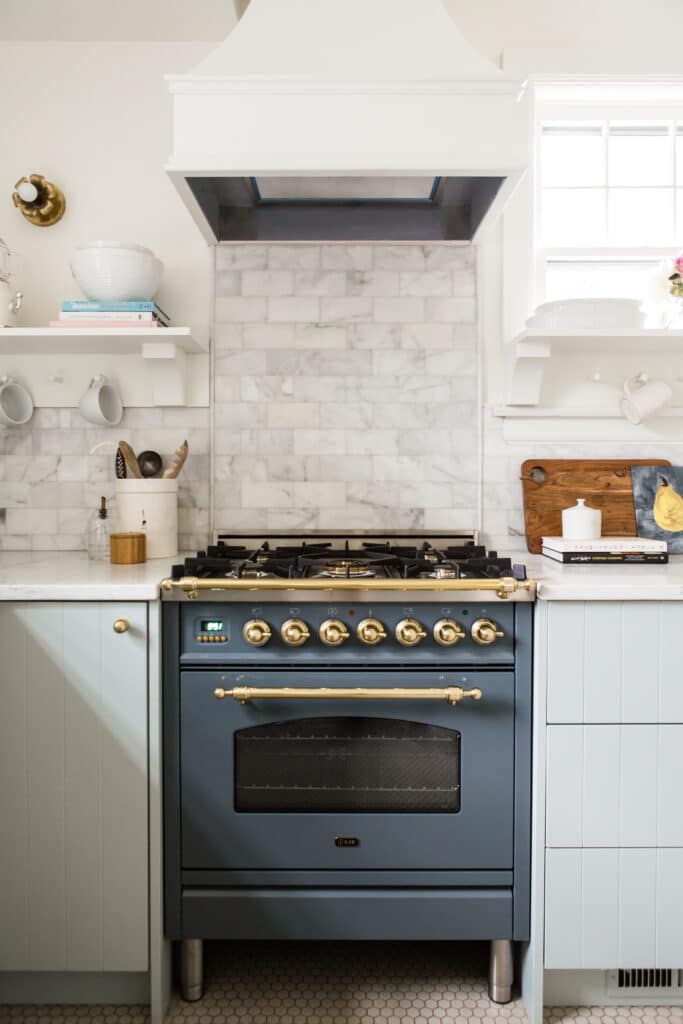 The kitchen itself, which measures a mere 200 square feet, now includes an integrated fridge in the pantry wall, which both saves on space and adds much-needed function.

“The IKEA frameless system is fantastic for storage, and you max out the cabinets well,” she says. Custom-on-a-budget was accomplished with Semihandmade’s Beaded Agave fronts, an homage to the home’s beaded front door, and DIY floating shelves.

“I wanted the cabinets to be light and bright,”she says. “We thought about the Night Sky but landed on Agave because it’s so dynamic. It can look green, gray, and even light blue.” Plus, the color complements the bathroom’s saturated green palette. 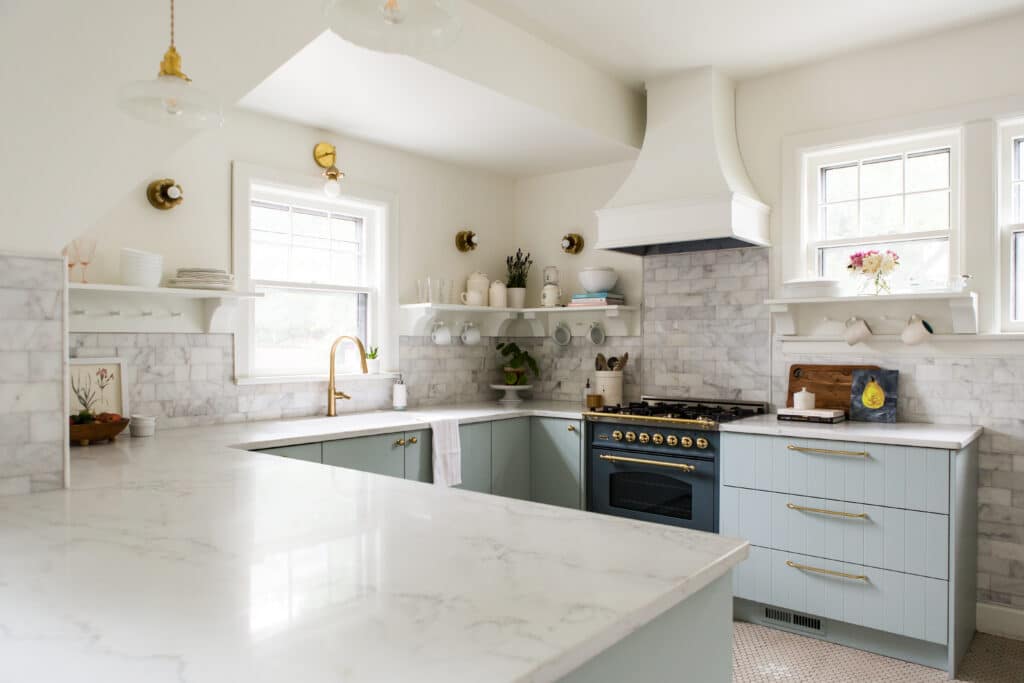 In addition to a small floor plan, there are many angles in this kitchen. “The soffit you see is a Tudor arch that’s part of the existing roofline,” she says.

To create an uninterrupted countertop, which Farley says was a major component of making the space feel larger than it is, she moved the fridge and put the stove in its place and the dishwasher is now where the stove once was. “We wanted everything to look cohesive and not broken up by the appliances, so we chose a panel-ready dishwasher,” she adds. 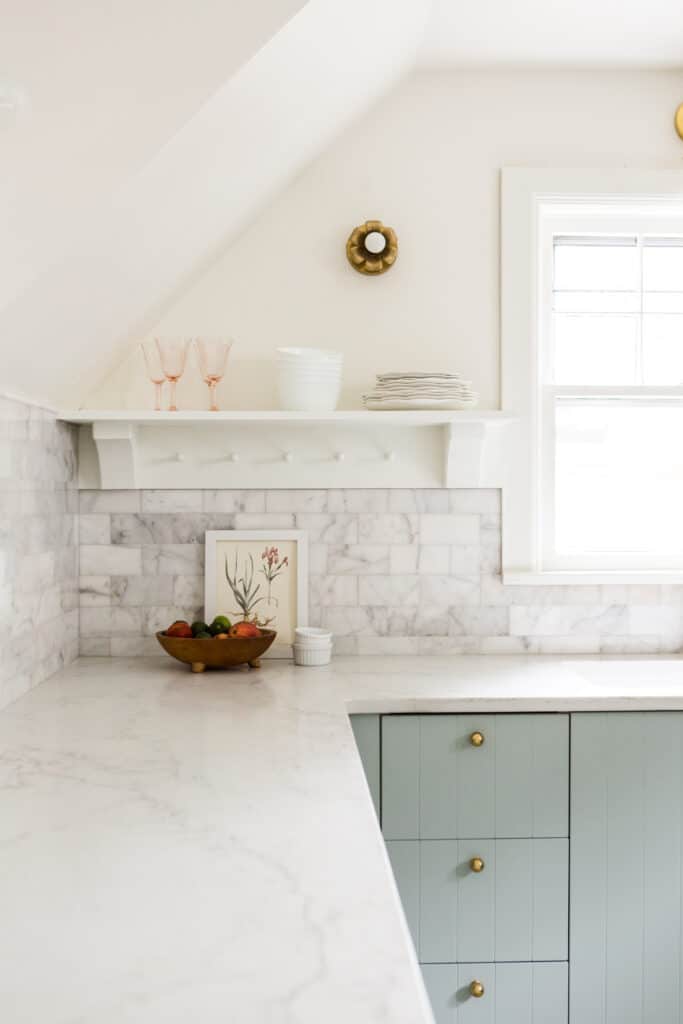 While Farley knew upper cabinets would look awkward, she was determined to make the most of the square footage using large IKEA boxes with a multitude of interior drawers. There’s a trash cabinet with an interior drawer, a 36-inch sink cabinet, and lazy susan, while a majority of the storage lies in the pantry wall. 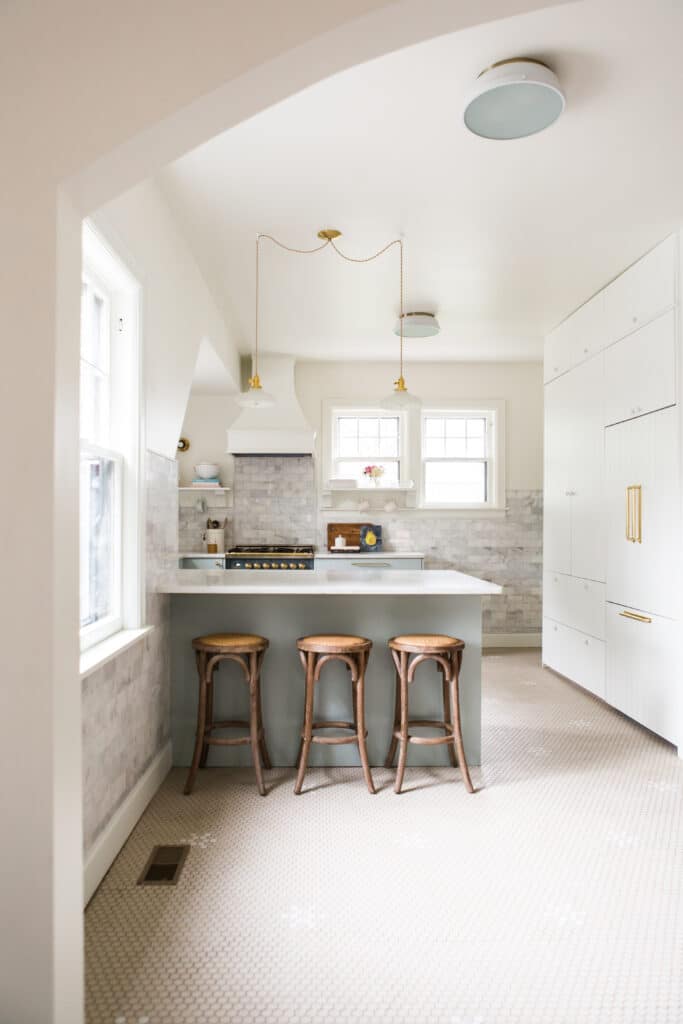 In lieu of costly historic flooring, Farley took inspiration from old-school restaurants. “I’m always amazed at how the tile holds up to high traffic,” she says. Emser tiles in fawn and pure white were laid out in a floral pattern and set, a collaboration between the designer and homeowner. “The pattern mimics the flowers in the Sazerac Stitches scones, as well as the tile in the bathroom that is a floral marble,” she adds.