What do you do when the star dish of your favorite holiday is decadent, rich, and crunchy fried treat?

If you ask cookbook author extraordinaire and food writer Adeena Sussman, it’s all about balance. She wasn’t about to forgo the familiar textures of fried potato latkes and jelly donuts for her traditional Hanukkah spread this year. Instead, the California-born New Yorker, who now lives in Tel Aviv, likes to balance out the more indulgent classics with a dose of healthyish sides. “It’s about fried foods in a new light: serving a green mixture over latkes, broccoli cottage cheese pancakes fried in olive oil, and a citrusy sumac chicken salad is very Tel Aviv in winter,” Sussman says.

Sunshine and seasonal produce are foundational to Sussman, whose daily trips to the local open-air market (called the Shuk) inspired her to create the sunny, Mediterranean recipes in her first solo cookbook: Sababa: Sunny, Fresh Flavors from My Israeli Kitchen.  Between the bright, crave-able recipes, and a name that means “everything is awesome,” it’s not surprising Sababa was named one of the best cookbooks of 2019 by the New York Times, Food & Wine, and Bon Appetit.

While on an extended stay in Los Angeles, where she’s helping co-author Chrissy Teigen’s third book in the Cravings series, Sussman shared her new take on a menu for the Festival of Lights: 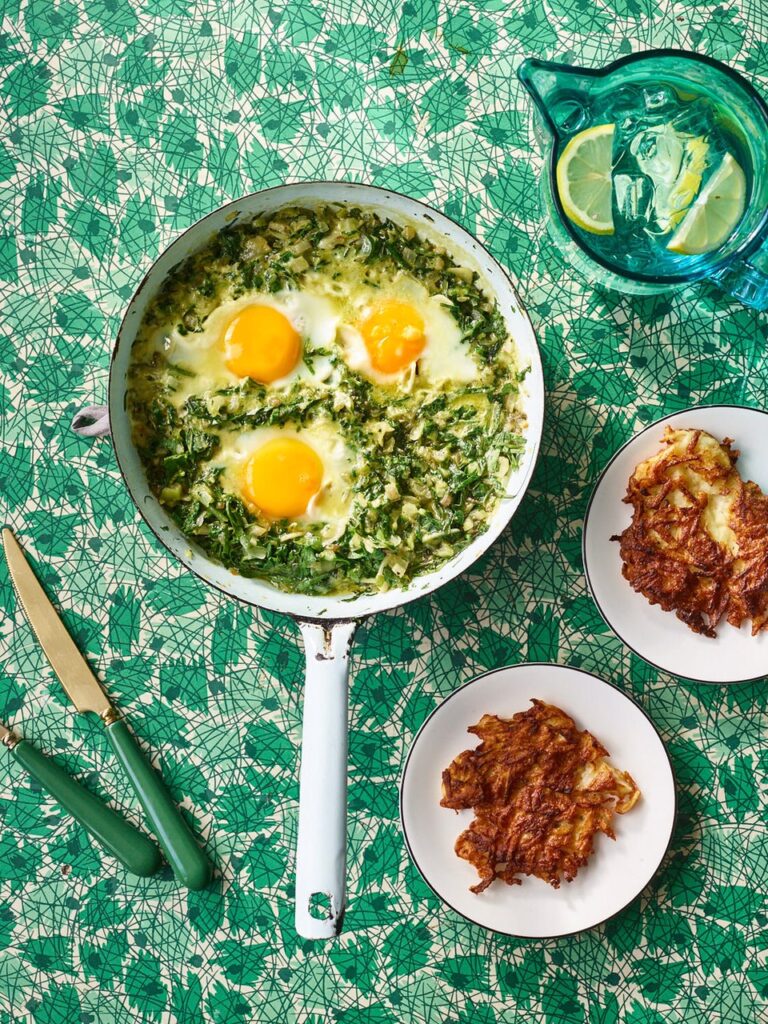 I wanted my green shakshuka base to hold together like a sauce the way its cousin, red shakshuka, does, almost becoming one with the eggs. I found my solution in an American steakhouse side: creamed spinach. By adding half-and-half to the cooked greens, it brings them together, taking on the earthy flavor of the vegetables while adding a little sweetness and creaminess. I took it a step further, making latkes that serve as the ideal landing spot for those golden yolks and sauce. You can make the sauce, cover it, move on to the latkes, and then, while they’re frying to a crisp, warm the sauce, add the eggs, and finish the shakshuka.

Set a rack in the top third of the oven.

Make the shakshuka: In a 12-inch oven-safe skillet, heat the olive oil over medium heat. Add the onions and cook, stirring, until lightly golden, 9 to 10 minutes. Add the garlic and cook, stirring, 1 more minute. Raise the heat to medium-high, then add the greens in batches, stirring as they wilt and release most of their liquid, 2 to 3 minutes per batch (you don’t want the greens to be completely dead, but they should have slumped and reduced in size significantly). Add the vegetable broth and cook until mostly absorbed. Stir in the mixed herbs, thyme, jalapeño, salt, pepper, and nutmeg.

Preheat the broiler. Reduce the heat on the stove to medium-low, stir in the half-and-half, and simmer until the mixture unifies and thickens slightly, 1 to 2 minutes (at this point you can turn off the heat, cover the mixture, and make the latkes). Use a spoon to hollow out eight small wells for the eggs, and crack the eggs into the wells. Cook for 3 minutes, then transfer to the oven and cook until the whites are just opaque but the yolks are still runny, 2 to 3 minutes. Serve over latkes.

Meanwhile, heat ¼ cup of the vegetable oil in a 10-inch skillet over medium heat (don’t worry, they’ll still crisp, without burning). Two or three at a time, spoon the mixture into the pan ⅓ cup at a time into 4-inch-round, ½-inch-thick latkes, pressing down gently, and fry until each side is golden and crisp, 3 to 4 minutes per side. Repeat with the remaining batter and oil; drain latkes on paper towels. Serve with the green shakshuka. 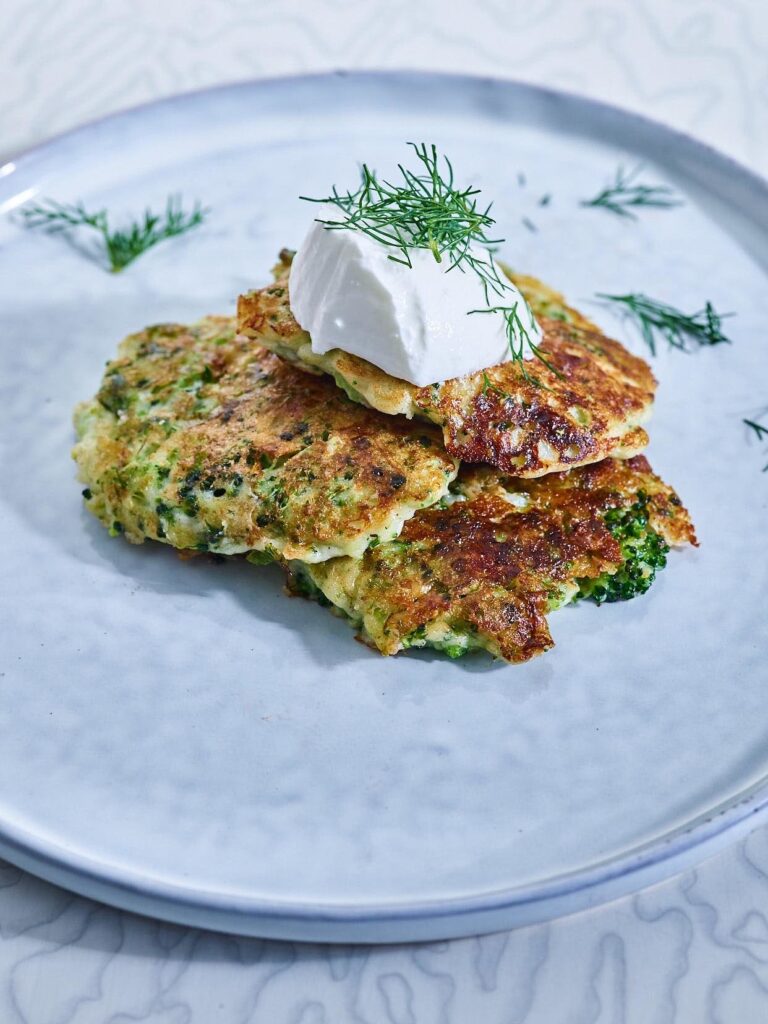 It’s not uncommon in Israel to see all manner of savory levivot, or pancakes, and ketzizot (patties). This decidedly retro one, made with cottage cheese and broccoli, falls somewhere in the middle. Cottage cheese is so rich and creamy here—it really adds something to the finished pancakes—so don’t skimp on the fat. Aim for a minimum of 4%, which is usually the highest you can find in American supermarkets. It’s all about getting the proportions right for a lacy, cloudlike creation that’s as good for dinner, lunch, or a snack as it is for breakfast.

In a medium bowl, stir the broccoli, cottage cheese, eggs, flour, chives, dill, baking powder, salt, and pepper until combined. Heat 1 tablespoon of the olive oil in a 10-inch skillet over medium heat. Make pancakes out of the batter, using 3 tablespoons per pancake. Fry until the edges are lacy and browned, 2 to 3 minutes per side, adding more oil to the skillet between batches as needed. Serve with sour cream and garnish with chopped dill. 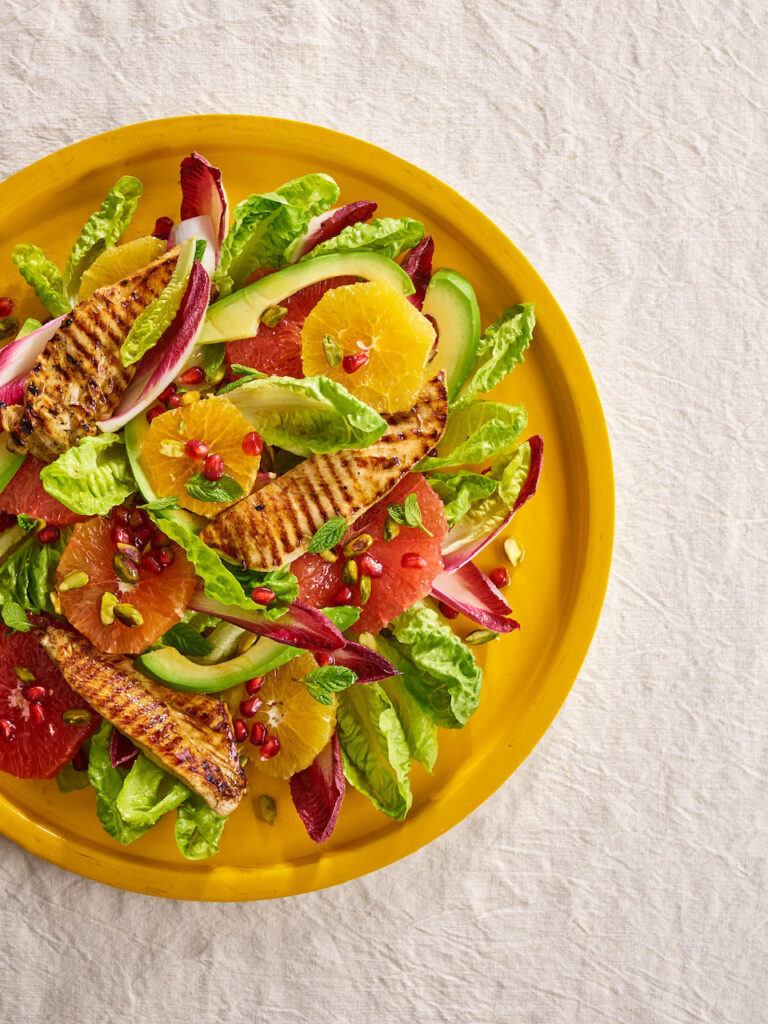 This may be the perfect sunny winter salad: juicy citrus, creamy avocados, crunchy lettuce, and a tangy sumac marinade and dressing. Since the chicken is also great served cold, you can basically make all the elements in advance and assemble it when you’re ready to eat.

Marinate the chicken: Combine the olive oil, clementine juice and zest, sumac, salt, pepper, scallions, and thyme in a gallon-sized resealable plastic bag. Using your hands, move the ingredients around to incorporate them. Add the chicken to the bag, move it around to coat it, seal the bag, and chill to marinate for at least 1 hour and up to 8 hours. Ten to 15 minutes before cooking, remove the chicken from the refrigerator to come to room temperature.

Make the dressing: In a jar with a tight-fitting lid, combine the olive oil, lemon juice, clementine juice, salt, pepper, and sumac, and shake until creamy.

Preheat a grill pan over medium-high heat. Remove the chicken from the marinade, shake off excess liquid, and season with salt and pepper. Brush the pan or grates with canola oil, then grill the chicken until caramelized and grill marks form, 2 to 3 minutes per side. Transfer to a plate and cool slightly.

Assemble the salad: Arrange the romaine, avocado, and citrus on a platter. Arrange the chicken on the salad, shake the remaining dressing again, and drizzle the dressing on top. Garnish with pomegranate seeds, pistachios, and mint.