Comedian, actress, and author Arden Myrin, known for Orange Is the New Black, Shameless, and Grey’s Anatomy, draws inspiration from many sources, including her family and childhood in Little Compton, Rhode Island. Her book, Little Miss Little Compton: A Memoir, details her colorful life, which has consequentially influenced her design style. Today, her Los Angeles home features rich textures, plenty of patterns, and colliding colors, culminating in a look she can only describe as joyful. 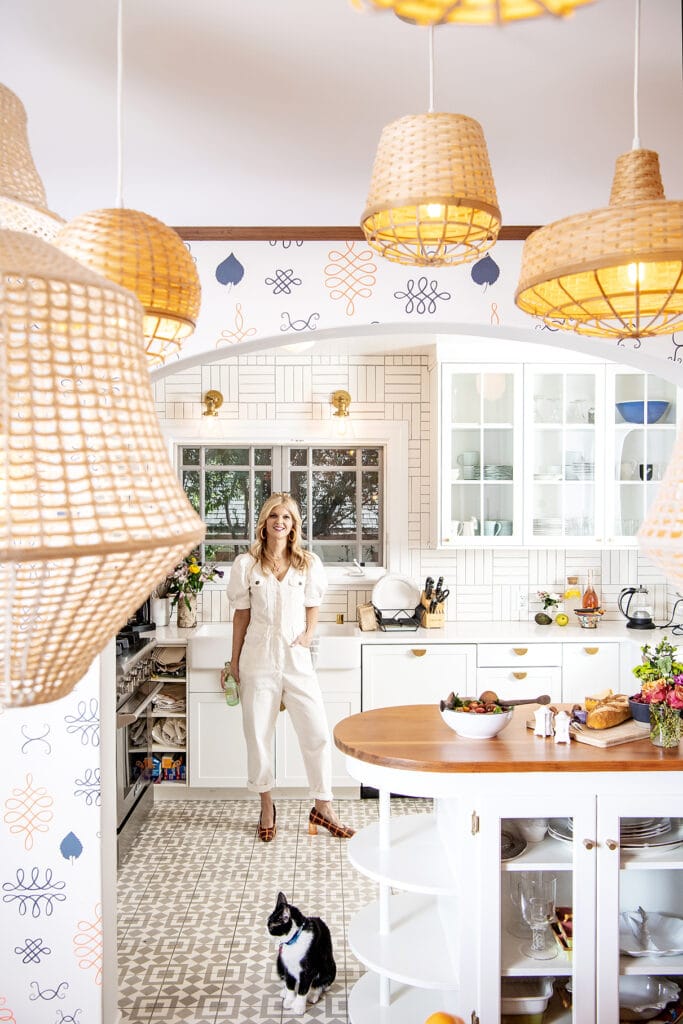 Photography by Mariah Tauger for the Los Angeles Times

“I have always loved making things,” she says. “I was an art and theater major, I draw, I write, and I love to create. So for me, this is just another way to create some magic,” she adds on designing the interiors of her 900-square-foot Silver Lake bungalow. Located in a cozy, quiet neighborhood, it was the perfect fit for the former New Yorker. “I love living in a neighborhood that has some foot traffic. I need signs of life in my day-to-day world,” she says. 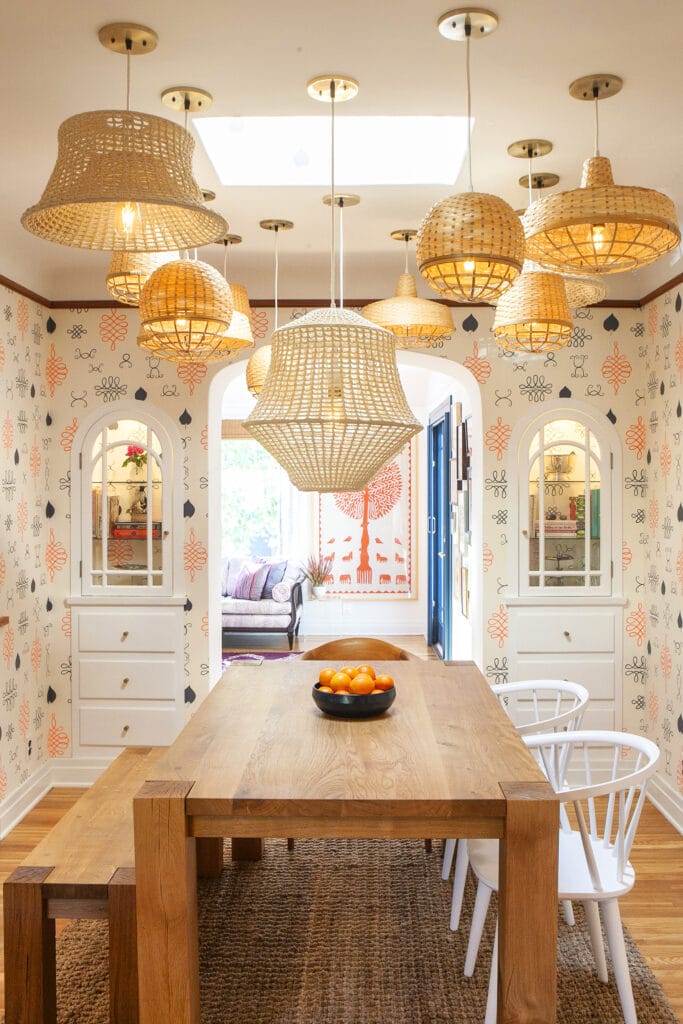 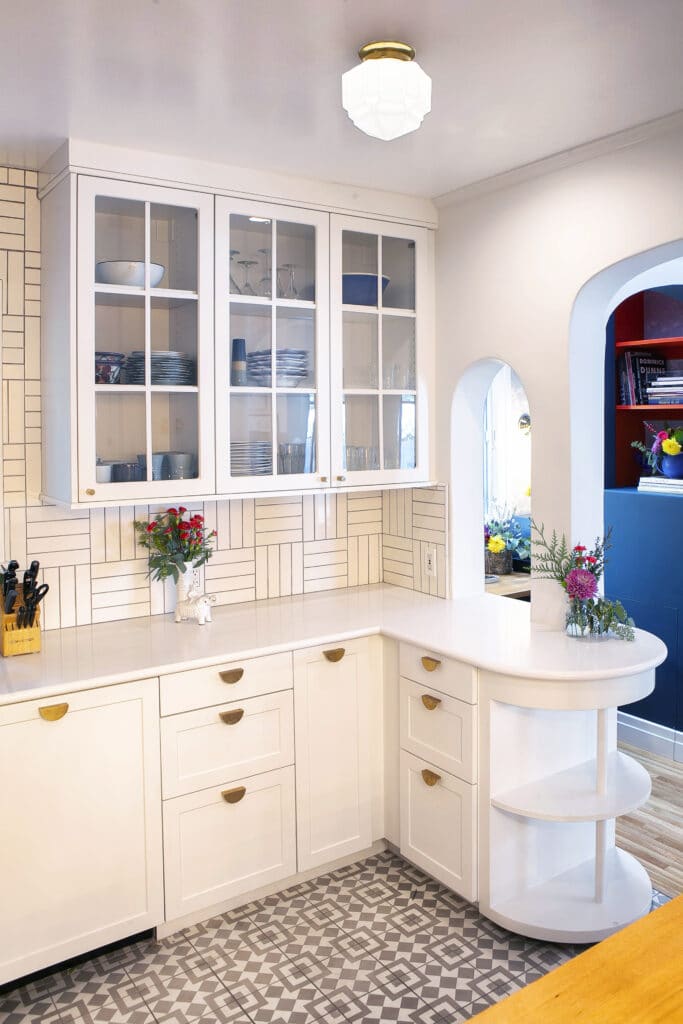 A Nod to the Past

“Overall, I love a sense of discovery in a house, like not everything has to be crazy or out there. I like to do a solid color room, but maybe do a little surprise of a pop of wallpaper on the ceiling, or something that you don’t see at first glance when you walk in the room,” she says. The result is a design that feels lively and melds an array of styles, inspirations, and eras. 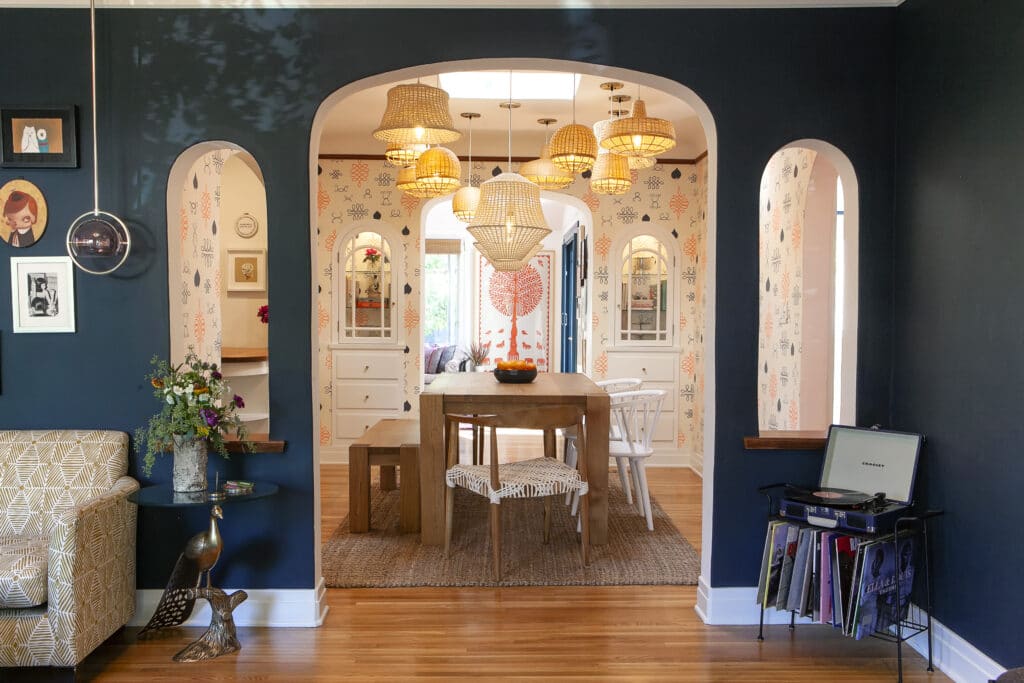 In the living room, Myrin went for a wallpaper that’s a nod to the past. “It felt like a modern take on more of a 1920s vibe. I loved the neon and the rich color on slightly stylized old-fashioned shapes,” she says. The house, which was built in 1927, still features many of the original architectural archways and built-ins, which lends to its nostalgic feel. 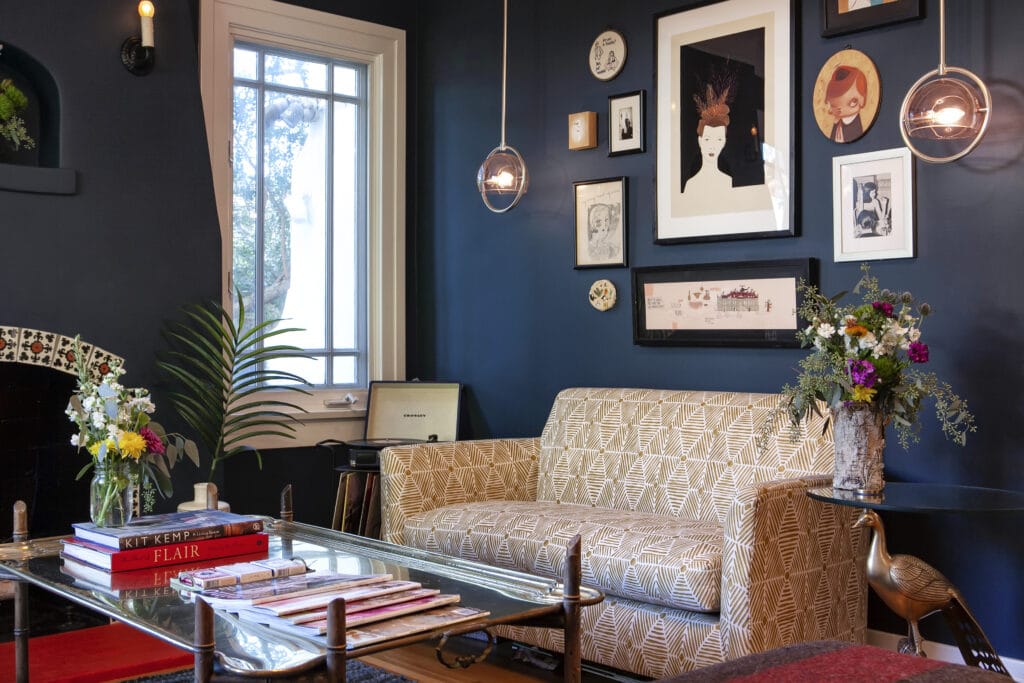 “The dining room was really my starting point for the whole house,” says the actress. “The rest of the house was designed to enhance it. The rooms around it are actually painted solid colors as I feel like the eye needs a place to land.” The kitchen, on the other hand, is open and light to support the dining room’s eclectic patterns. 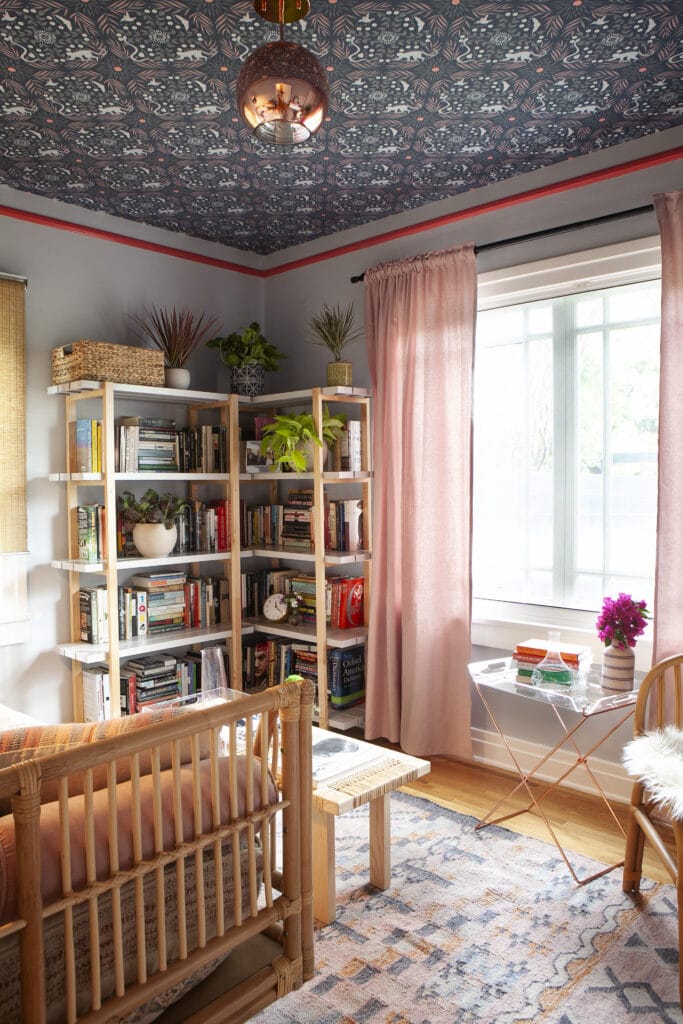 “There are no doors between the rooms in the main part of the house, just these wonderful arches, and I wanted it to be casual and relaxing yet chic,” she says. In order to accomplish this, she opted for tiled walls, made from Mission Tile West subway tile, Semihandmade Supermatte White Shaker doors in the kitchen, plus rounded hardware, the Half Moon pulls by Sarah Sherman Samuel. 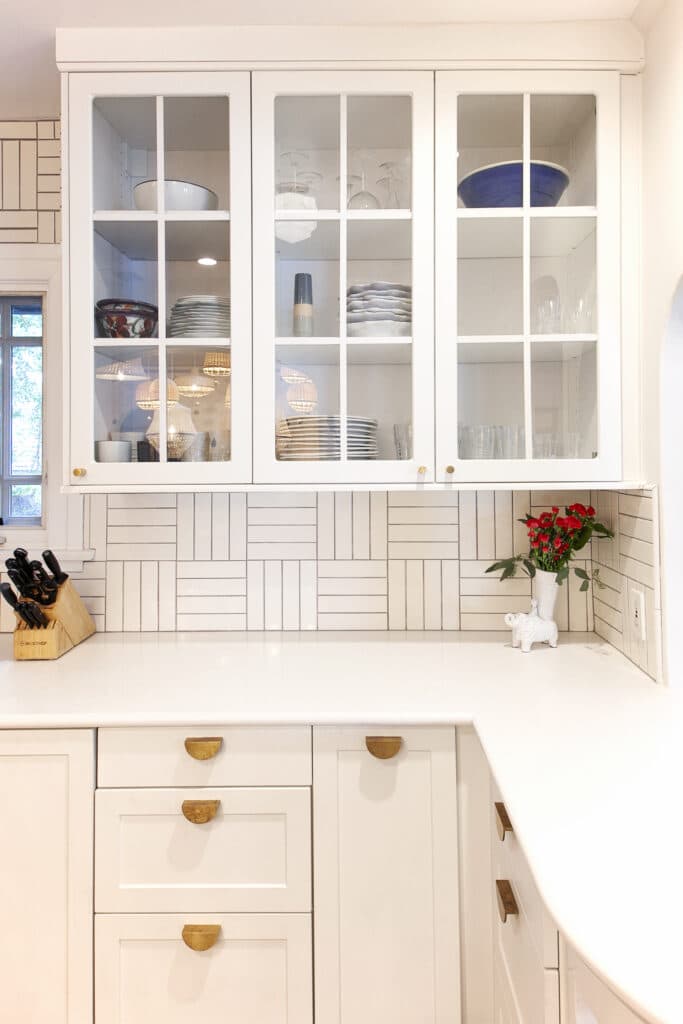 Although this project isn’t Myrin’s first foray into design, this was the first time she acted as her own general contractor. “Never before have I been in charge of all of the installation, permits, taking some rooms down to the studs, and then figuring out who to bring in first. The electrician? The plumber? It was a real learning curve,” she says.

Another big challenge was that there were no doors between the rooms. “All of the rooms really had to be in conversation with each other; They all had to balance and enhance one another,” she says. 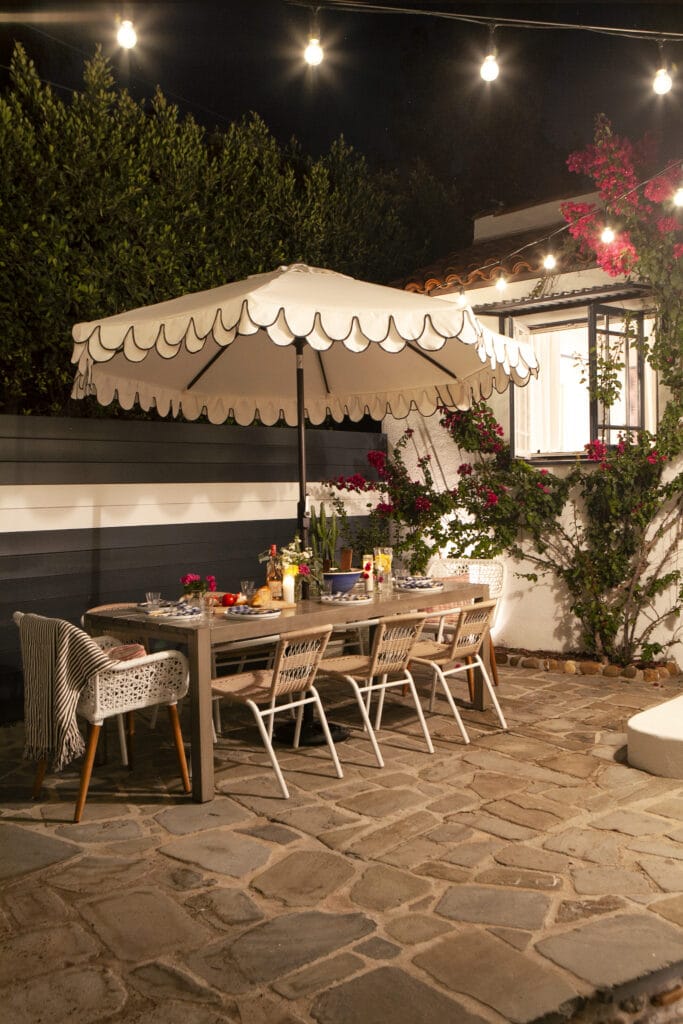 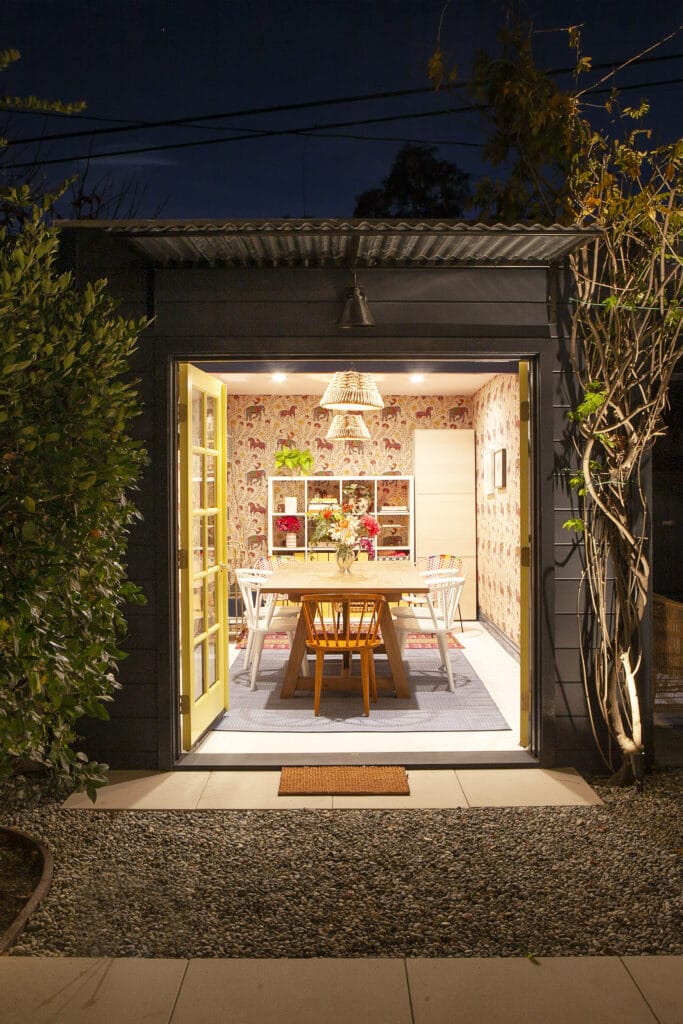 Photography by Ted Thornton (both)

In order to strike a balance, Myrin used light fixtures and different patterns to denote the barriers of each room within the open-concept layout. In the dining room, patterned wallpaper by JuJu Papers creates a whimsical feel. Most notably, her playful dining room lights from IKEA showcase Myrin’s talents as a DIY designer. “The electrician thought I was crazy when I asked for 14 holes in the ceiling, but once they were all installed he asked if he could take photos of them to show everyone what he had done. It was very sweet,” she says.

Overall, Myrin’s magnetism on screen shines through in her home. “I have never been afraid of color,” she says. From her work on MadTV to her inventive creativity and authentic, hilarious memoir, it seems that the same could be said to apply to her world as well.