As an interior designer who specializes in renovating centuries-old houses in the Georgetown neighborhood of Washington, D.C., Feldman is experienced in shining up properties that were already charming to begin with. That’s what made Karine Shebaclo’s post-war apartment a particular challenge.

“There was no fun history,” Feldman explains. “We had to figure out how we were going to make it interesting.”

After having briefly worked together years ago, Feldman got to know Shebaclo as a bubbly ophthalmology resident that she describes as “one of these super happy people that you wish you were.” So when Shebaclo showed her the apartment, the contrast between her personality and the rooms made it clear that the home needed a complete transformation. “It was pretty dark with low popcorn ceilings,” Feldman says. “She has this very cheery disposition, so it didn’t feel like it suited her.” 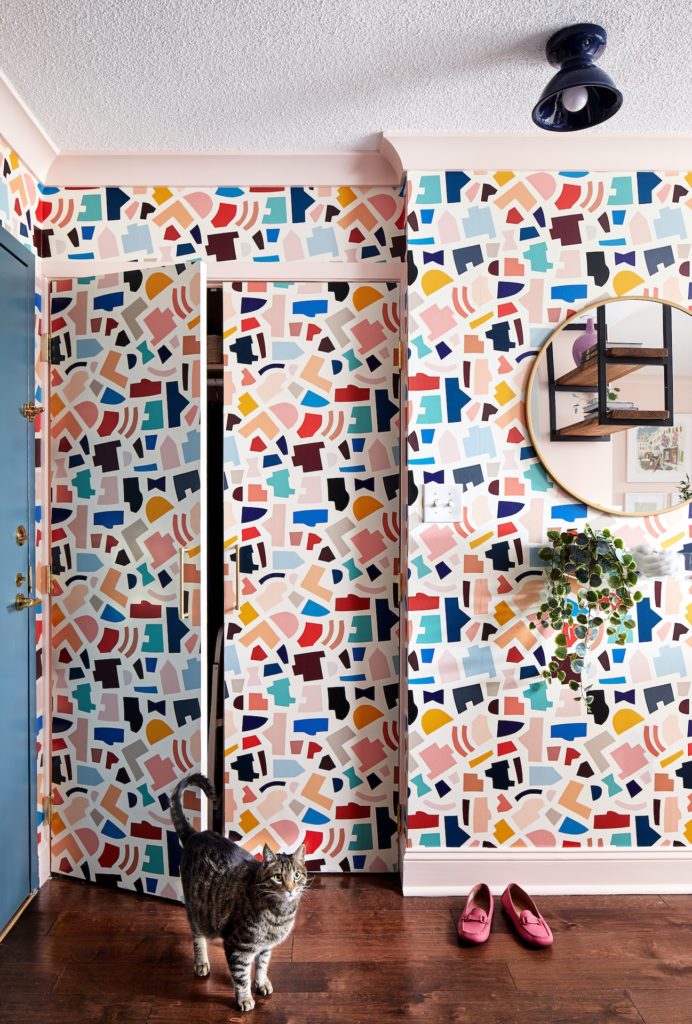 “I wanted something bright, airy, sophisticated, and chic, but also with personality and color,” Shebaclo says. This wallpaper by local artist Kate Zaremba is removable, if she ever decides to change things up. 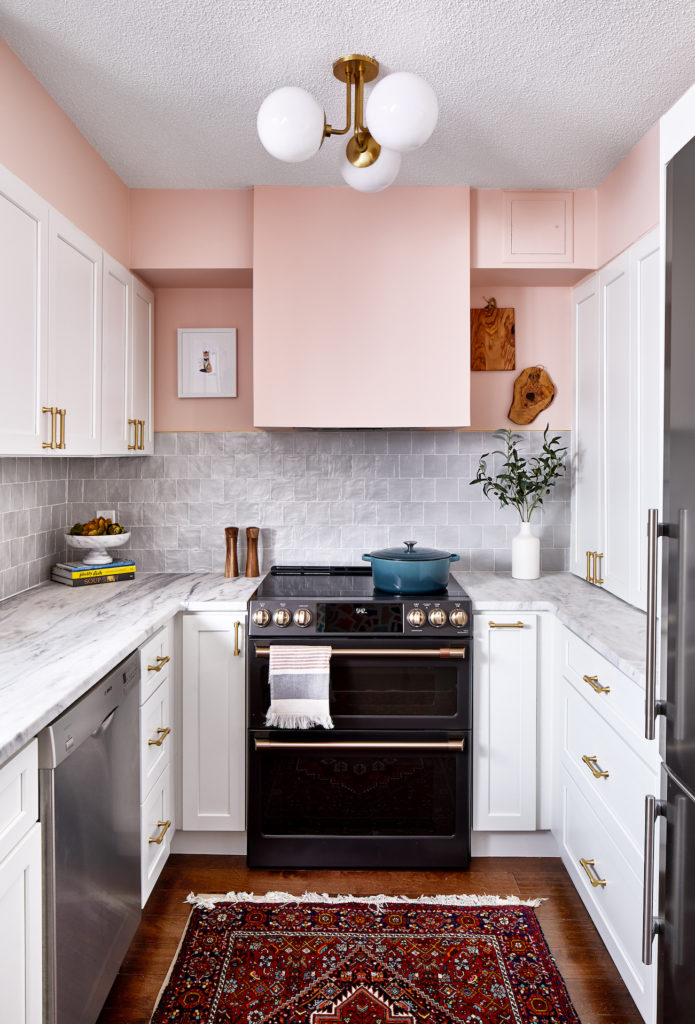 Feldman wanted to add some depth to the cheery kitchen, so she chose a black stove instead of a white one.

To reimagine the 700-square-foot space, Feldman started with Shebaclo’s request for a certain color. “She had recently visited the Quirk Hotel in Richmond, which uses this Love & Happiness pink paint,” Feldman says. “She fell in love with it.” Though Shebaclo originally wanted to use the Benjamin Moore shade in a subtle way, she was a bit apprehensive. Feldman encouraged her to go all in, and with that push, the design suddenly had a foundation. “This is my last bachelorette pad before I can’t paint an entire apartment pink,” Shebaclo jokes.

With the sweet shade as a backdrop, Feldman decided to adorn the front entrance with a complementary wallpaper that’s patterned with an abstract map of the city. Its array of shades filled in the rest of the home’s palette. “It’s this really vibrant piece when you walk in,” Shebaclo says. “It’s almost like art rather than just entryway wallpaper.” Beyond its prints and colors, Shebaclo’s other goals for the home included ample storage and natural light—plus a way to incorporate her beloved rugs. 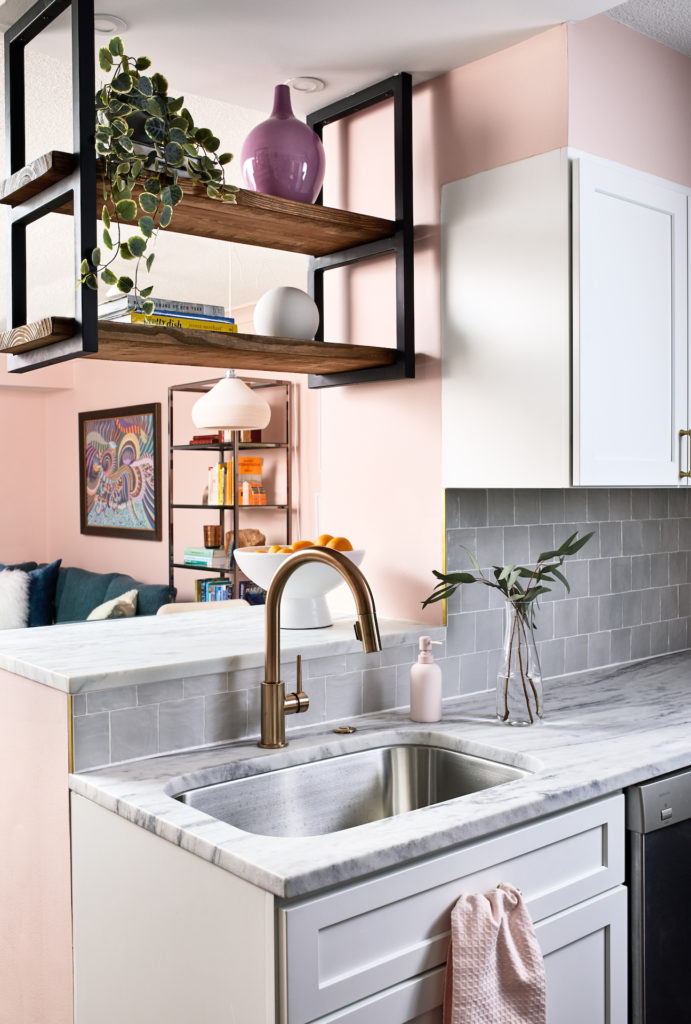 Feldman complemented the existing wood floors by using a similar stain for open shelving and cutting boards that are on display. 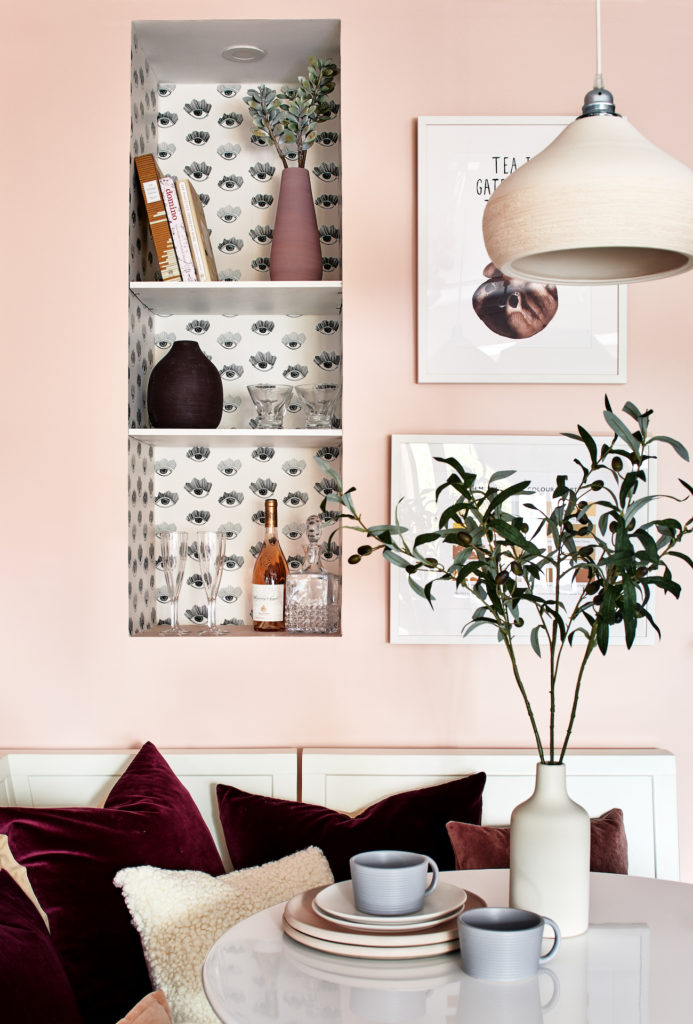 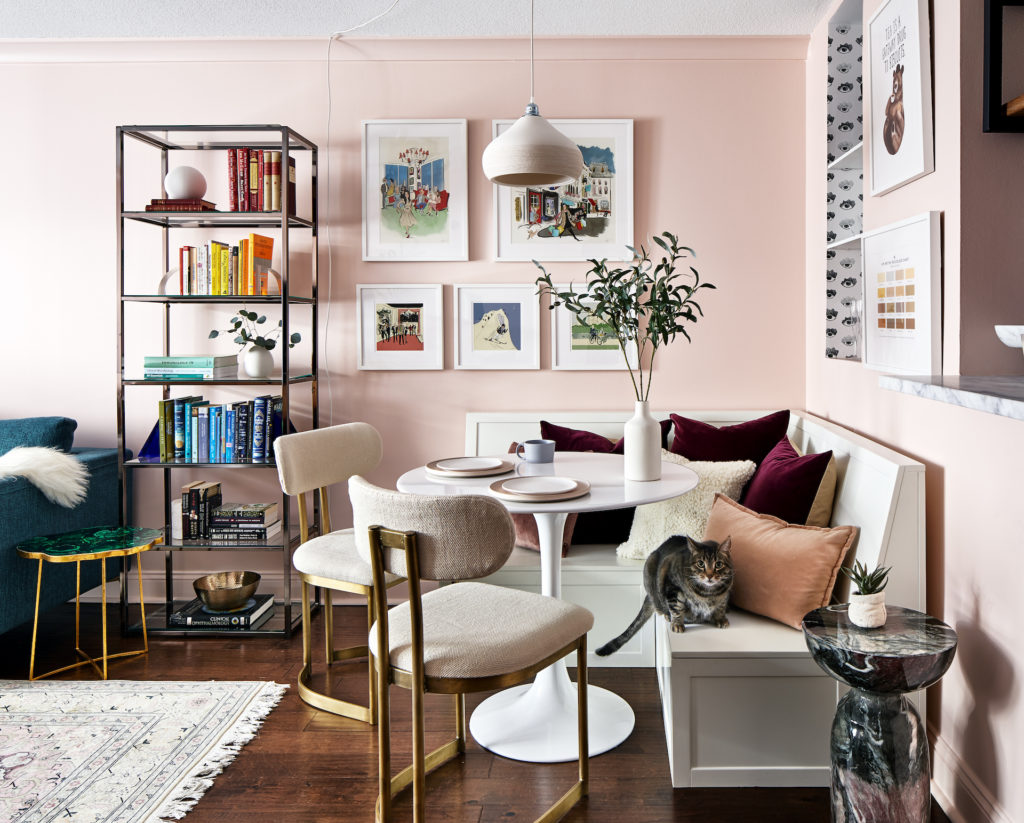 Shebaclo uses the nook to study, work, eat, and entertain.

“My grandma left me these beautiful Persian rugs that are very one-of-a-kind, antique pieces,” Shebaclo says. “I told Zoë that whatever direction we went in, I wanted to bring those into the space to tie it together.”

One of the rugs is a deep red number that pops against the kitchen’s pink walls. Both are a contrast to the Mont Blanc marble countertops from Atlas Stone Fabricators and a Montauk Sky ceramic tile backsplash from TileBar. “We like blending cool tones with warm tones,” Feldman says. “The gray in the stone and in the backsplash could’ve been very cool for the space, but by adding the pink, it warmed it. We like that juxtaposition and that tension.” 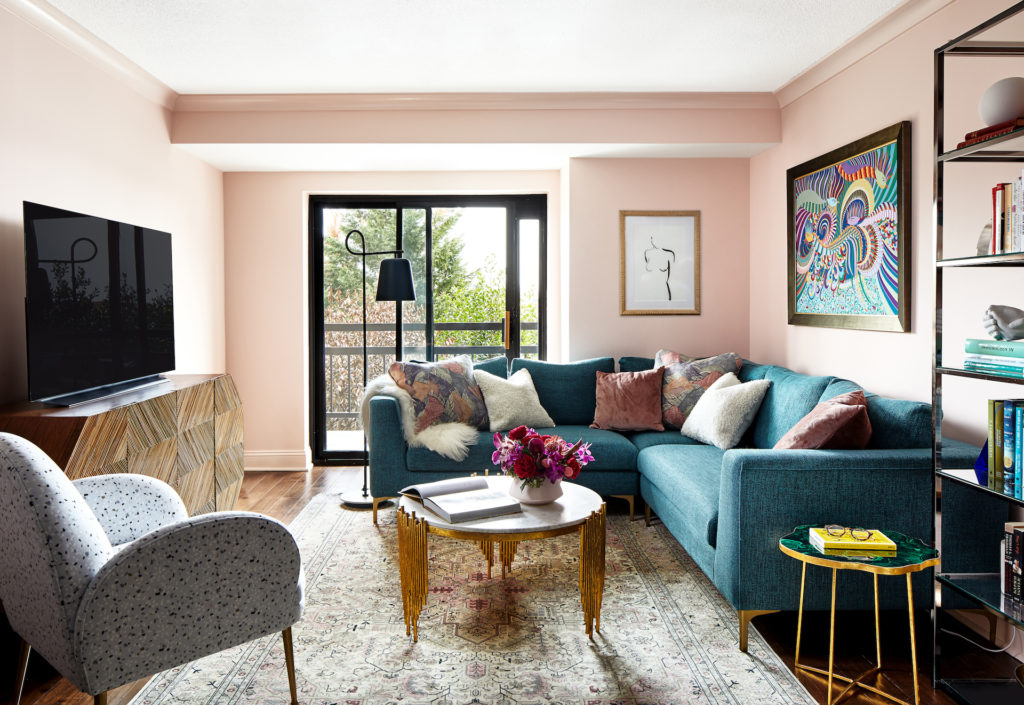 “The ceilings are cement, like many post-war buildings, which made it difficult to add lighting, but we knew we needed to, so we lowered the ceiling in certain places to create sockets and add more track,” Feldman says. The terrazzo velvet chair, green enamel side table, and Art Deco-like cocktail table are all from TOV Furniture. A CB2 credenza completes the space.

Around the corner, the cozy dining nook is anchored by a Ballard Designs three-piece banquette that offers useful storage in the seat. Treasured pieces from Shebaclo’s art collection hang above, while a niche holds wine bottles, vases, and cookbooks. “We used that eye paper because she’s an ophthalmologist, so it’s a nod to her profession,” Feldman says.

A tall chrome bookcase that Shebaclo already owned separates the nook from the living room, which features another existing piece as its anchor: a teal couch. Feldman surrounded it with sculptural furniture that could balance out the rest of the room’s details. “We always want to add some warmer pieces so it doesn’t look too one-note,” Feldman explains. “That, to us, is just adding in some wood and keeping it a little warmer because there’s a lot of metal.” The same consideration for color and scale carried into the bedroom, which was inspired by the pinks and blues in the rest of the apartment. 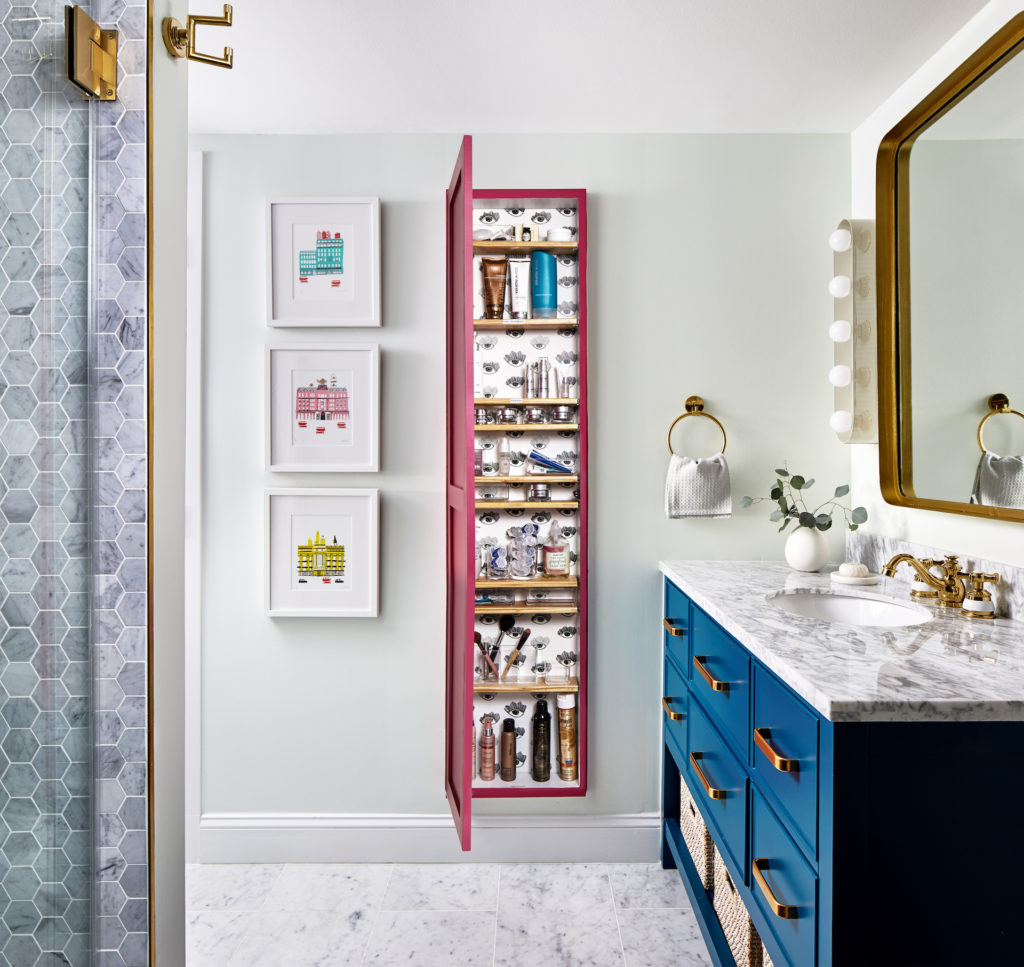 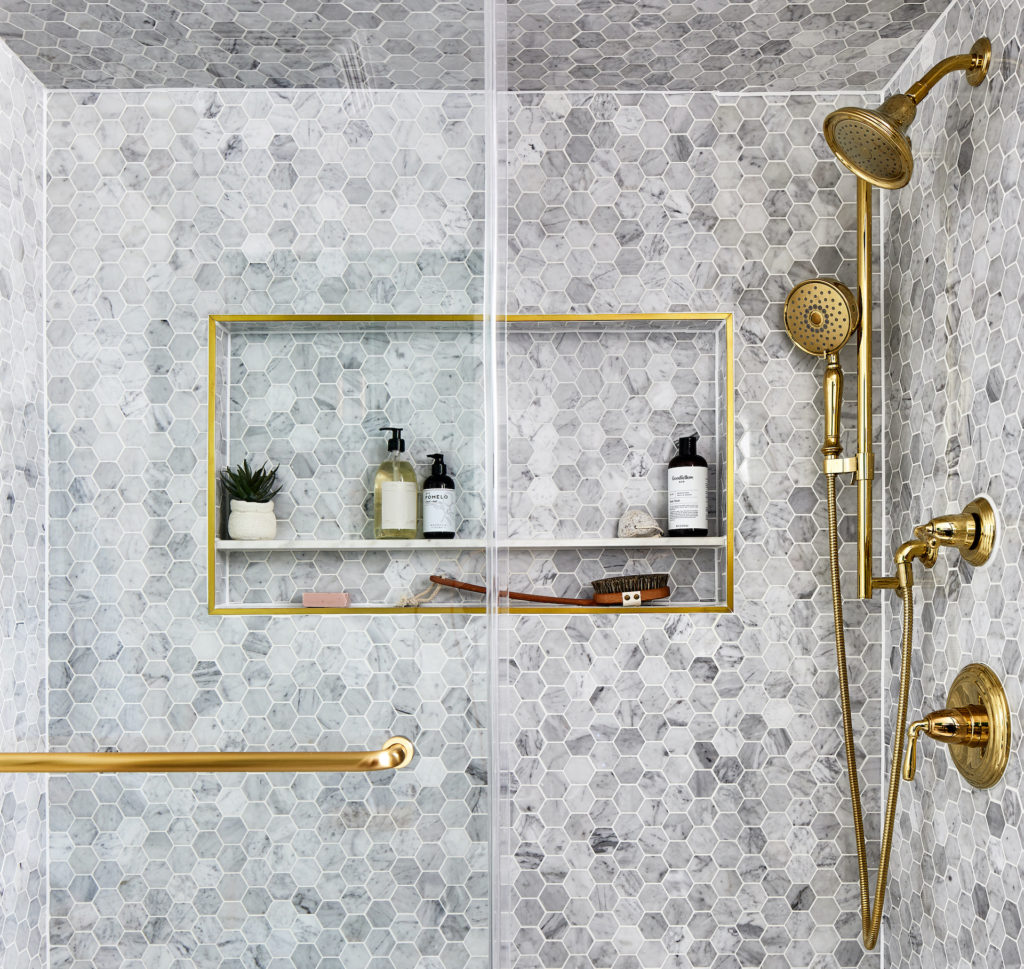 In the bathroom, Carrara marble dominates, especially in the shower. “For small spaces, we like to keep a lot more continuity, so we didn’t use too many different materials,” Feldman says. 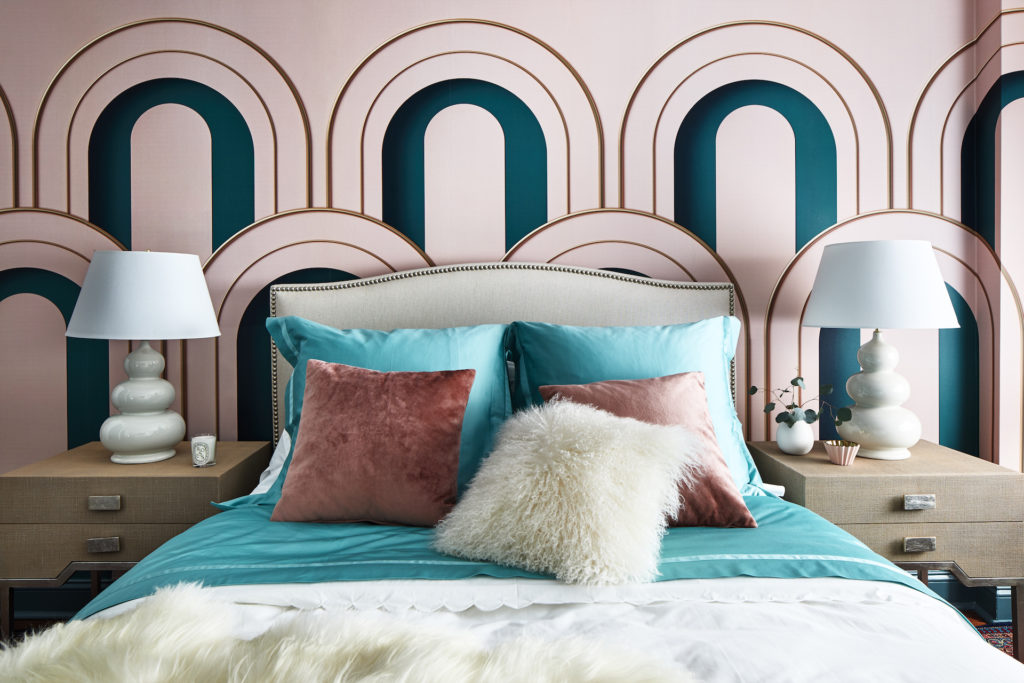 The colors continue into the bedroom, where an Art Deco-inspired mural acts as a focal point in the space. “I really live in every aspect,” Shebaclo says.

“We found this big mural from Rebel Walls and we thought it was perfect,” Feldman remembers. She kept the bed, nightstands, and table lamps neutral as to not distract from the big, arch-filled wallpaper. And as for the bathroom? It’s a “jewel box” too, complete with bold shades and storage to spare.

Now that the apartment is a true reflection of her bright personality, Shebaclo could not be happier with the renovation. The timing couldn’t have been better, too. Completed right before quarantine began, her new space is providing unexpected relief from this difficult period.

“I never thought I would spend so much time at home, but now I’ve spent so much time by myself at my apartment,” Shebaclo says. “To be honest, it’s been very serene and fun. I love being in my place.”