Mandy Moore, Garance Doré, and Vanessa Carlton are just a few of her A-list clients. But the acclaimed designer is just as thrilled by a good deal as the next person. “I love being able to create exactly what I want, for a fraction of the cost,” she says of her approach to custom projects. (It’s no surprise she has her own line of Semihandmade cabinets made just for IKEA).

In her own Grand Rapids, Michigan home, she DIYed the kitchen island, storage cabinets, nursery shelving, bunk beds, and more. As for the low-slung media unit in the living room: “It might be my all-time favorite,” she shares. The cabinet, which is made up of two IKEA Besta units, Sherman Samuel’s own beaded doors, and wooden balls from Amazon repurposed as legs, clocks in around $809. “A piece this large and unique could easily cost thousands of dollars,” she says of the eight-foot-long structure.

While you’d assume Sherman Samuel has some sort of process when coming up with these creative hacks, she proudly flies by the seat of her pants. “I usually just make things up as I go along,” she says, laughing. “For example, I didn’t install the wooden legs on the media unit until weeks later.” She even made her own hardware. If she makes it look so easy, it’s because it is. Here’s how to get the look:

Assemble the IKEA Besta media units according to the instructions.

Line the assembled units up against the wall to hang. We rested the Besta unit on stacks of tile to figure out the right height and marked the wall for drill placement. 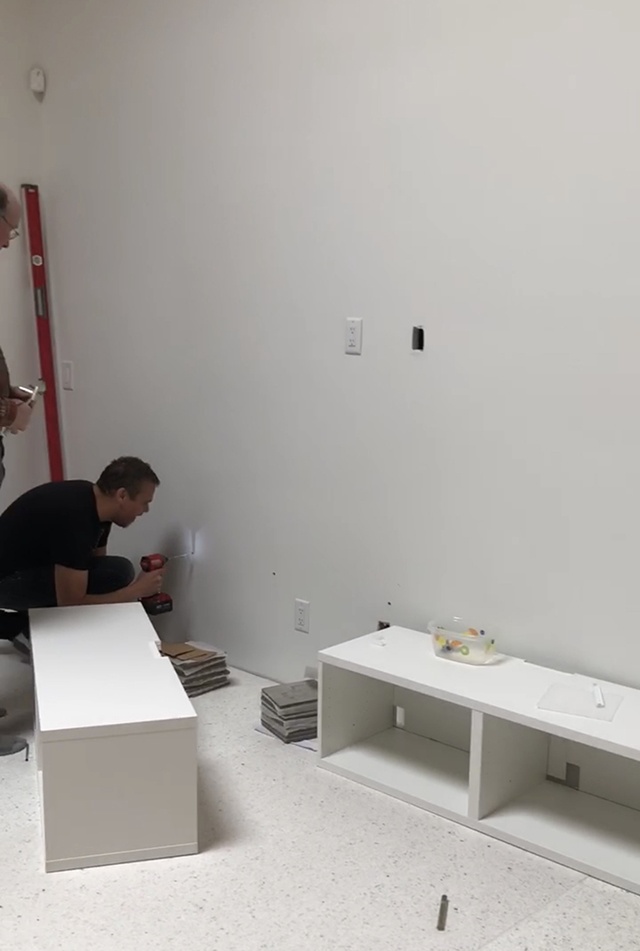 Use the toggle bolts to attach the suspension rail to the wall and attach the Besta unit to the wall, following the IKEA instructions. 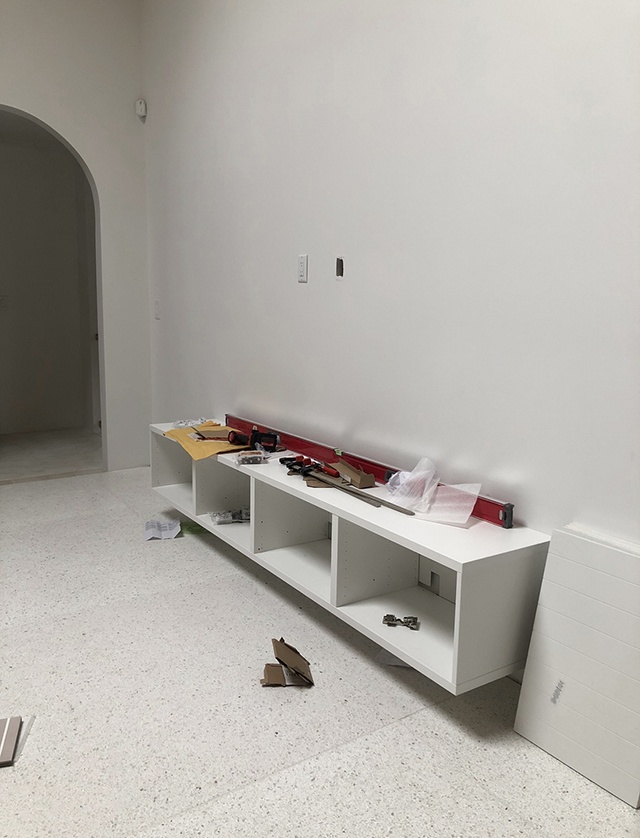 Using an orbital sander with 100-grit sandpaper, sand down the wooden balls to create a flat surface on the top. To do this, hold the orbital sander as still as possible and let it do the work.

Flip each ball over and create the same flat spot on the opposite side. (Our floors aren’t level, so I would sand a bit, test it out, and sand a bit more until they were the right height.) Secure the legs to the four corners of the unit with a long screw from the inside. 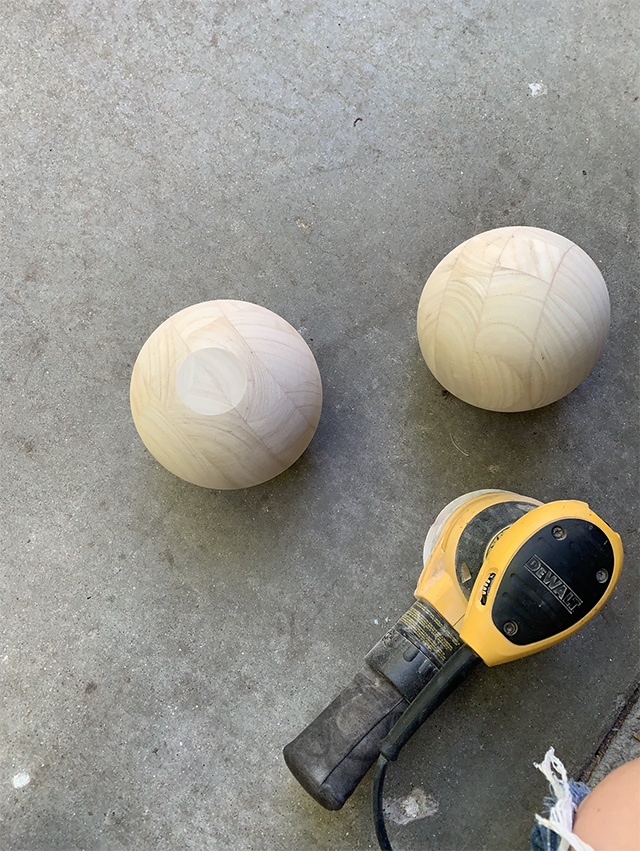 Attach the hinges to the doors. Semihandmade doors come pre-drilled to fit IKEA hinges. Hang the doors on the unit and install your hardware of choice (mine are prototypes I had made while developing my wood hardware line, which isn’t available yet). It’s that easy! 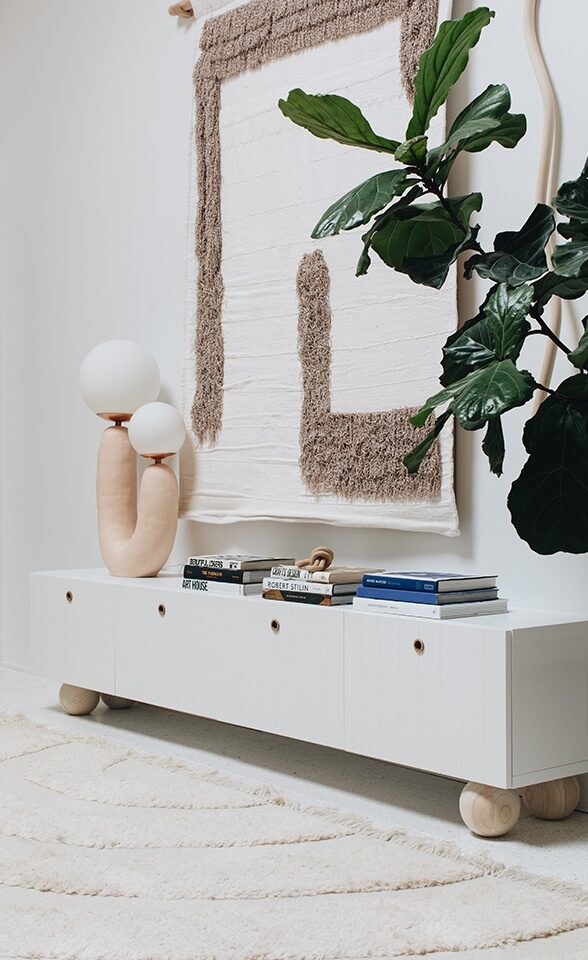 We are no strangers to DIY home renovations at Semihandmade. After all, that’s where the idea for making doors for IKEA kitchen systems came from. So naturally, we had to dedicate an entire section of SemiStories to celebrating our design community’s ingenuity, from DIY kitchen ideas to thinking of smaller details like rattan glassware and easy-to-make wall hangings. Don’t just take it from us: we’ve tapped the best in the business. Anita Yokota shared her best trick for a $20 bathroom renovation, Jessica D’Itri Marés shared her favorite spray painter, and Jenna LeBlanc showed us how to give wall-to-wall storage a custom touch. Maybe you’re just dipping your toes in the world of do-it-yourself, in which case we recommend starting small: try your hand at making your own speckled candle holders, for example, or give your greenery an updated home with pretty stacked planters. If you have a handy side (maybe you’ve put together DIY kitchen cabinets or are not afraid to use a power tool), we have projects for you too: painting a hand-painted mural is a fun way to give your favorite room some life or maybe you’re game to try putting together your own TV cabinet like Sarah Sherman Samuel did (PS: she saved thousands in the process). Experts, we’ve got you covered too: from learning to tile and grout your own backsplash to painting your cabinets without a hitch, we have plenty of DIY kitchen renovation ideas to keep you busy. We don’t stop at the kitchen either: from wall-to-wall media centers to fluted doors made for playroom storage, you’ll find ideas to improve every room in the house