Serendipity landed Matt and Erin Conway the house of their dreams, but first, they had to rip out layers of crushed velvet wallpaper, shag carpet, and macrame (not the trendy type).

The design blogger and her firefighter husband were originally outbid when they attempted to buy their Pacific Grove, California home, but as an act of kindness, the seller had placed them in the backup position. It was an unexpected twist of fate that the first offer fell out of escrow and the place became theirs.

“We named the house Kismet because of the way in which it came to be,” Erin explains. With the competitive Central Coast market, it was a real estate miracle that they were able to secure the property with their tight budget. The lengthy, stressful process, however, was just the beginning.

The Conways were tasked with updating a true 1970s time capsule. “It was an enormous undertaking,” describes Erin. Fortunately, Matt and his father are skilled handymen who have tackled the renovation one DIY project at a time. Over the past four years, the retro relic has slowly transformed into a modern family home that mixes thrifted antiques with contemporary accents. 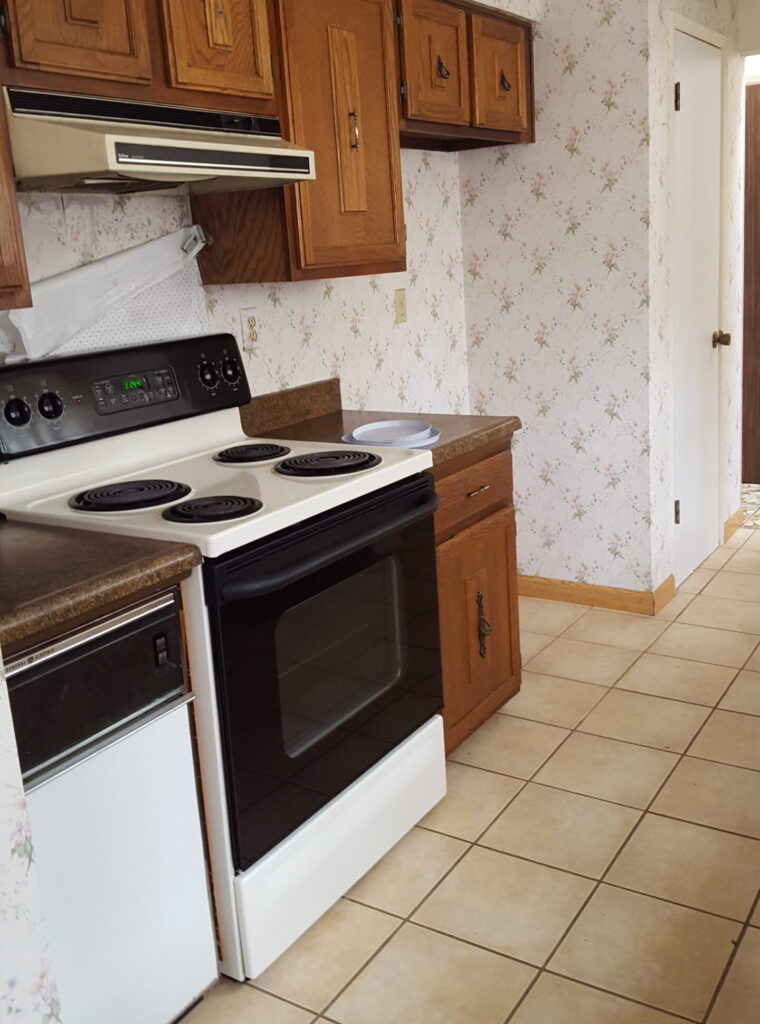 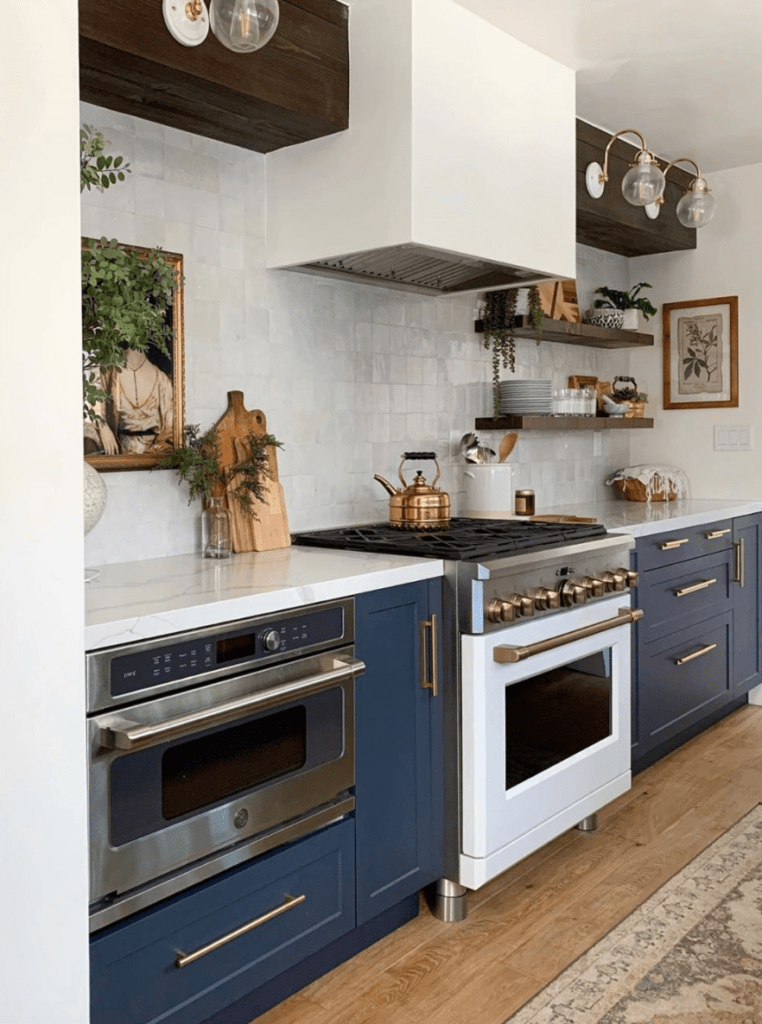 The quest to overhaul the dysfunctional galley kitchen began with examining the compact footprint. When expanding proved too pricey, the duo opted to reorient the layout for optimal flow. They eliminated upper cabinets and one of two existing pantries in favor of a robust, user-friendly IKEA system of lower cupboards that provides much more room than they had before. The deep, practical boxes are fronted by Semihandmade Supermatte Night Sky Shaker drawers and doors. “I wanted a moody color and that was my jumping-off point,” says Erin. 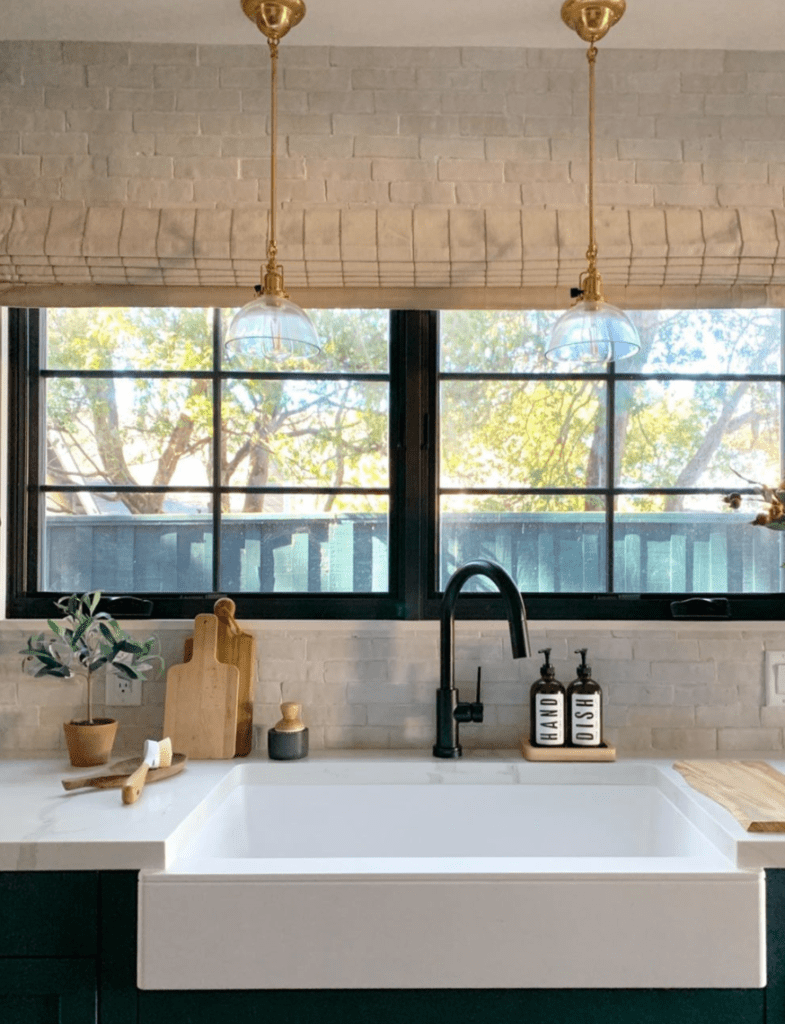 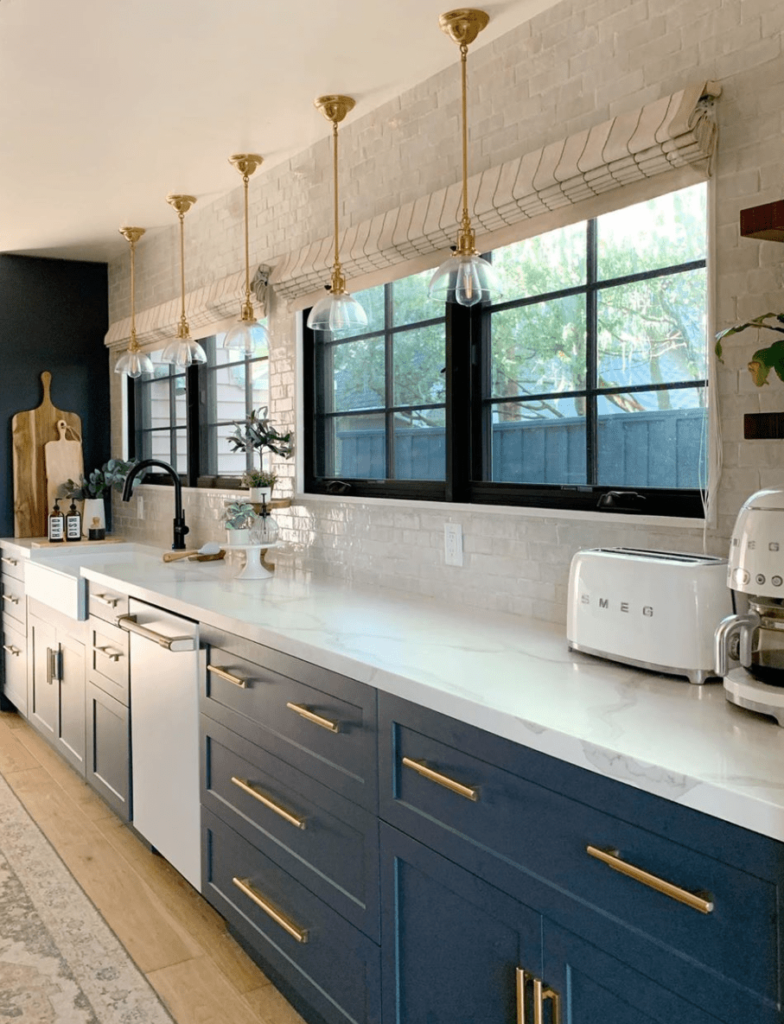 Aged brass Rejuvenation Upton pulls punctuate the cabinetry and match the arched sconces and domed pendants that illuminate the room. Instead of doubling down on the warm metal, Erin chose to bring in a black faucet to complement the windows and copper elements like an old-fashioned kettle because she knew the “brushed brass” hardware on her matte white Café Appliances would actually resemble rose gold. “I like 80 percent of a dominant finish and 20 percent of others so that there is a cohesive story with some variation,” Erin says. 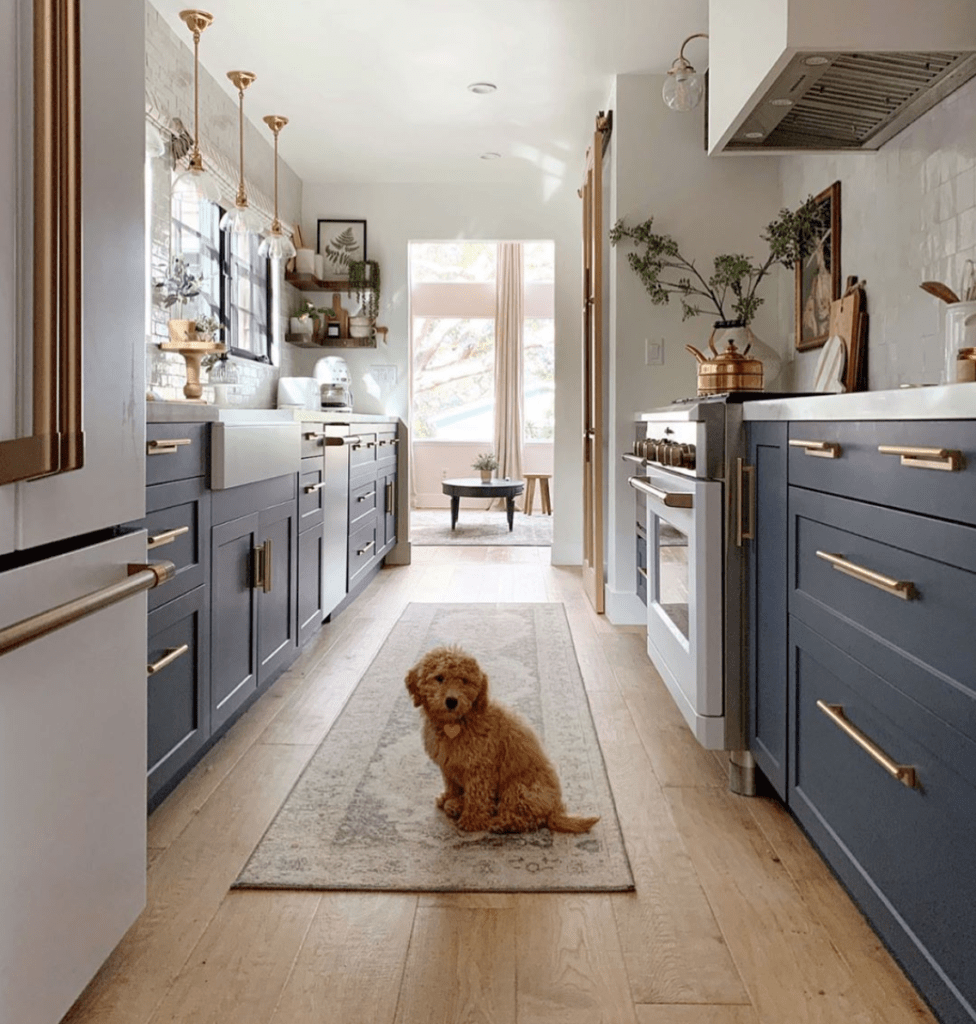 Cool, gray tones in the quartz countertop and Clé weathered white zellige backsplash balance out the palette. A discerning eye will notice that the tiles, though the same material, are square on one side and rectangular in a subway pattern on the other. “It’s a very small kitchen, so there’s not a lot of opportunities to have a big personality,” Erin explains. “I wanted to do something that gave it more texture, dimension, and excitement.” 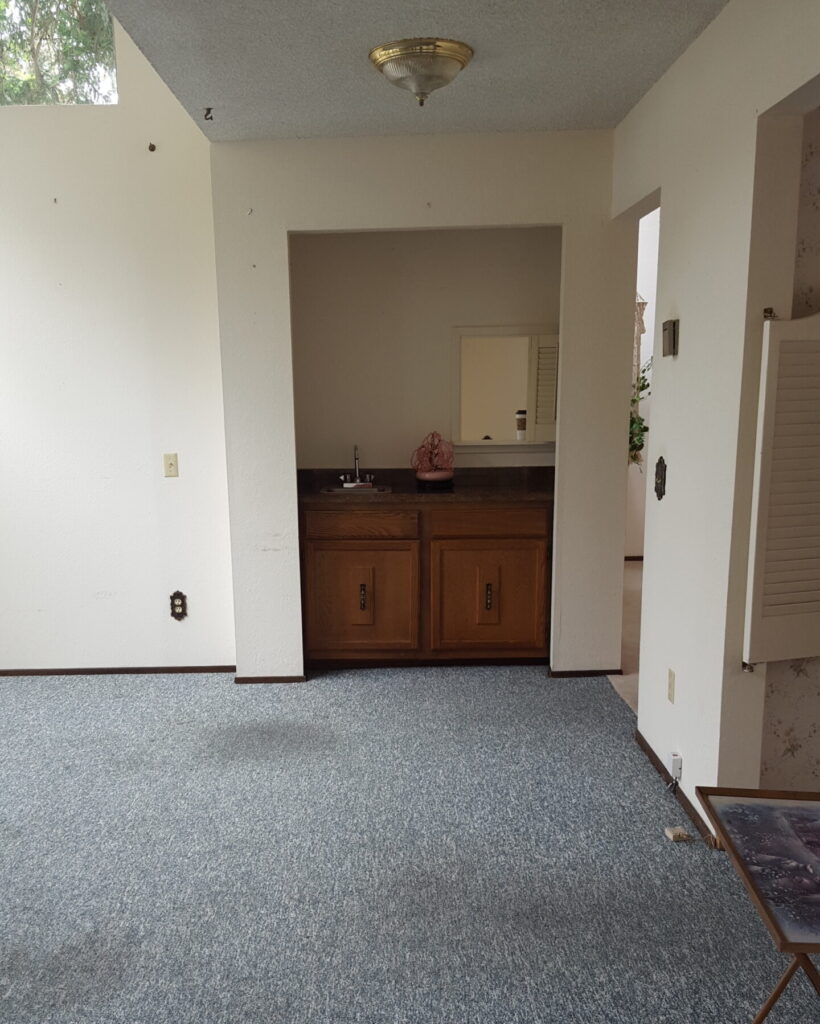 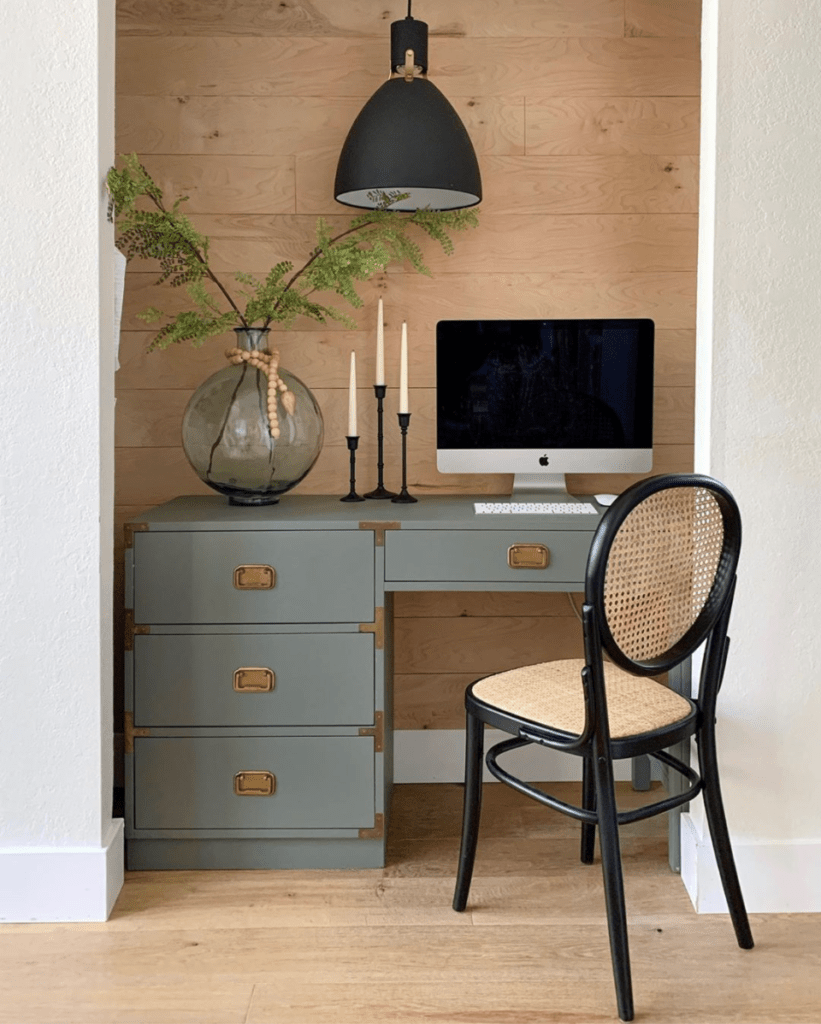 The couple ripped out faux stone, ornate damask wallpaper, and floor-to-ceiling mirrors throughout in favor of more modern wall treatments. In the cozy family room, unfinished plywood planks create a raw shiplap look in both the former wet bar that has been converted into an office nook (a saving grace during pandemic times) and the short wall across the room. Matt installed picture frame molding on the adjacent double-height wall to accentuate the vaulted ceiling. 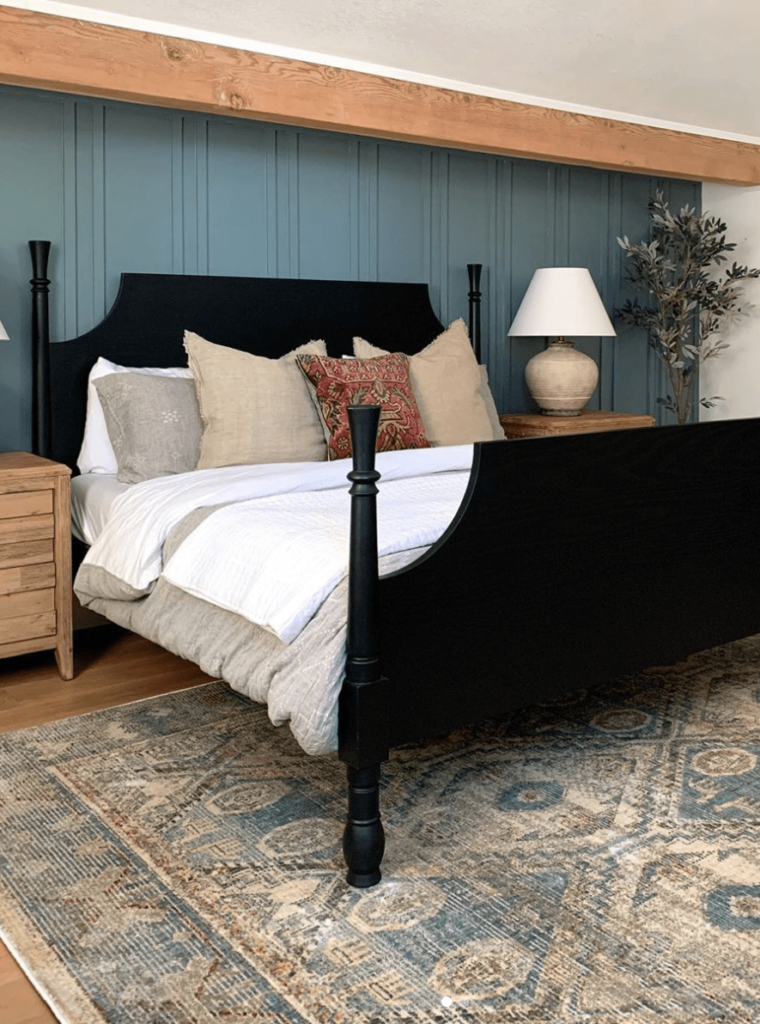 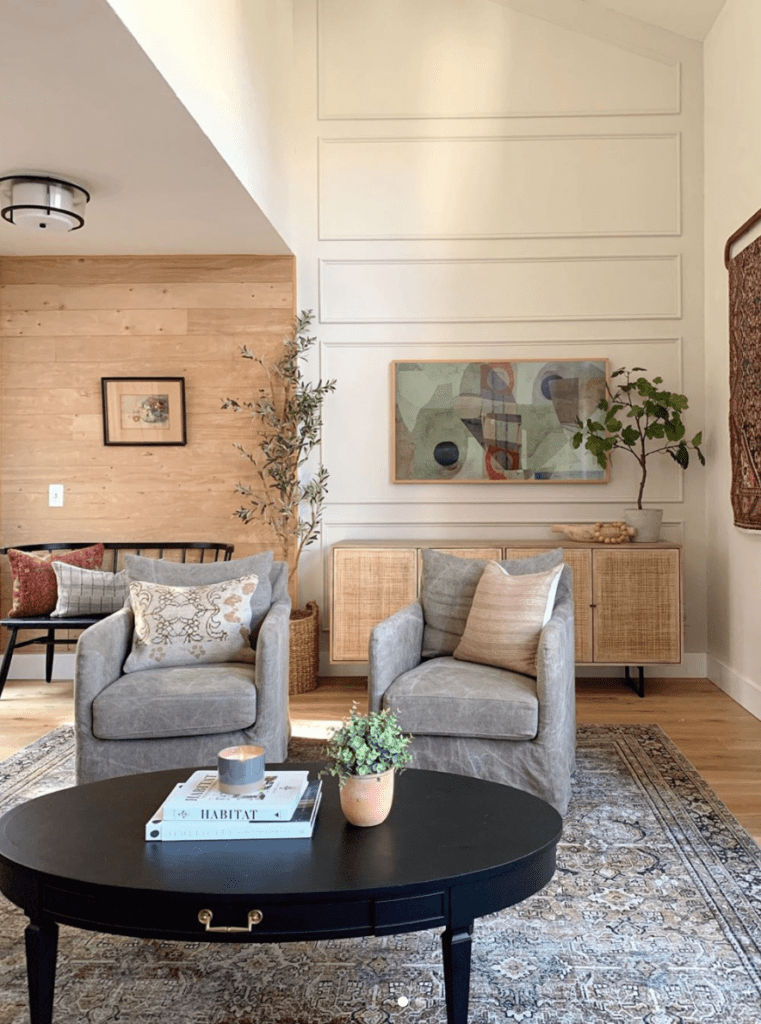 Erin chose the same effect in the living room where she wanted to fill an expansive, bare surface without needing to hang a ton of art. In the main bedroom, a modern take on board and batten is painted in an earthy, faded teal. 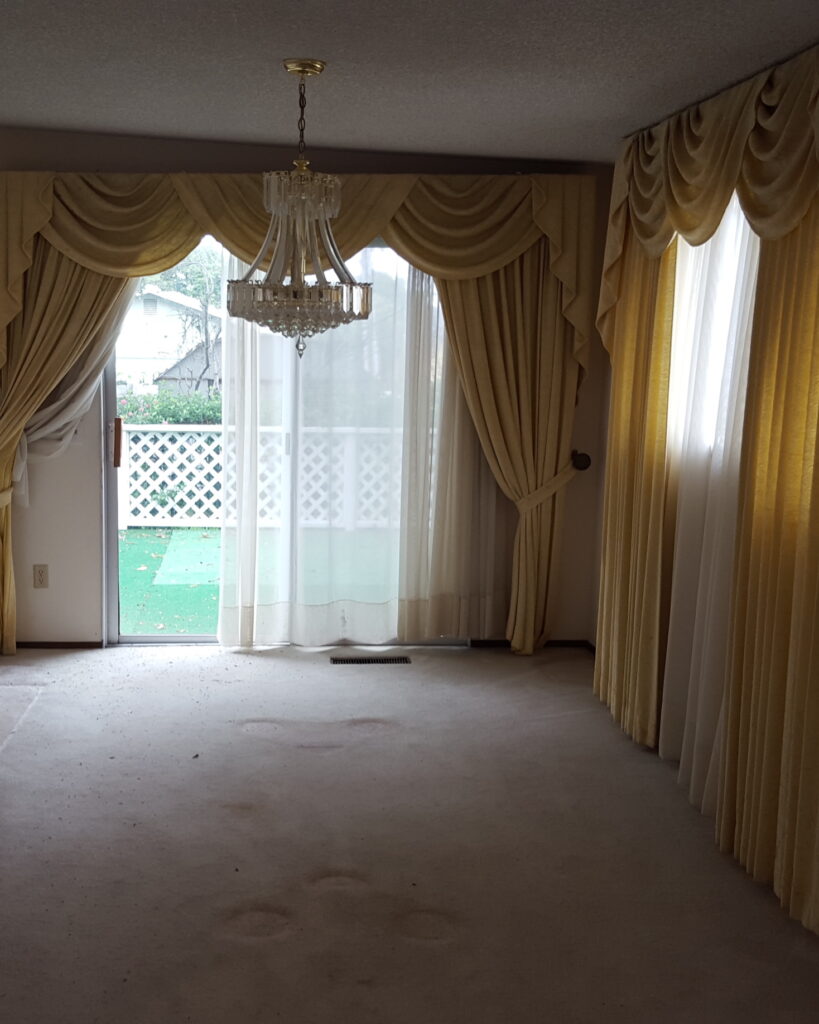 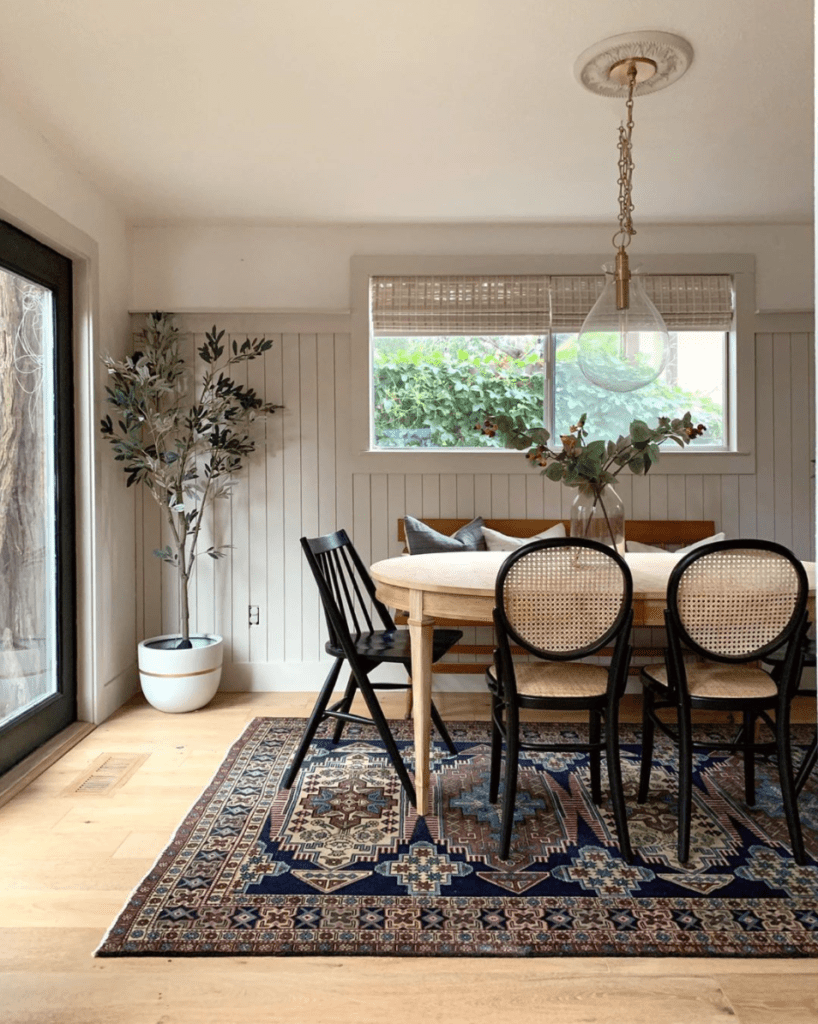 Vertical wood paneling and plate rail molding were the solution to a challenge in the dining room that plagued Erin for months. Centered electrical in the narrow, sunken area forced a flawed setup with a cramped walkway, but she rejected the idea of swagging a chandelier until she found an oversized, clear glass pendant with a long chain that would work. Once Erin accepted the asymmetry, she and Matt made it appear intentional by revolving the room around the accent wall. “We completely shifted the focus,” she says. A result of trial and error, it was a relief to finally get it right.