Velinda Hellen launched her design business in concert with the COVID-19 pandemic.

“The world shut down a week before we were supposed to start my first demo,” she shares. The project in question? An extensive kitchen, dining, and living room reno on a builder-grade budget for a Los Angeles couple—Mer and Olly—a challenge in itself without the added stress of a global health crisis. “We had to keep the team super small,” says Hellen. “It was basically me, the contractor, and his son.” What’s more, it was the Emily Henderson alum’s first time designing entirely by herself, down to every drawing and detail.

Strategic spending and thrifty decor hacks ultimately helped Hellen pull off the remodel with flying colors (Cambridge blue, to be exact). She turned three dark, divided rooms into a spacious, heart-of-the-home kitchen and wrapped up the project this past September. “I held my breath until the very end when Mer and Olly gave final, exuberant approval.” 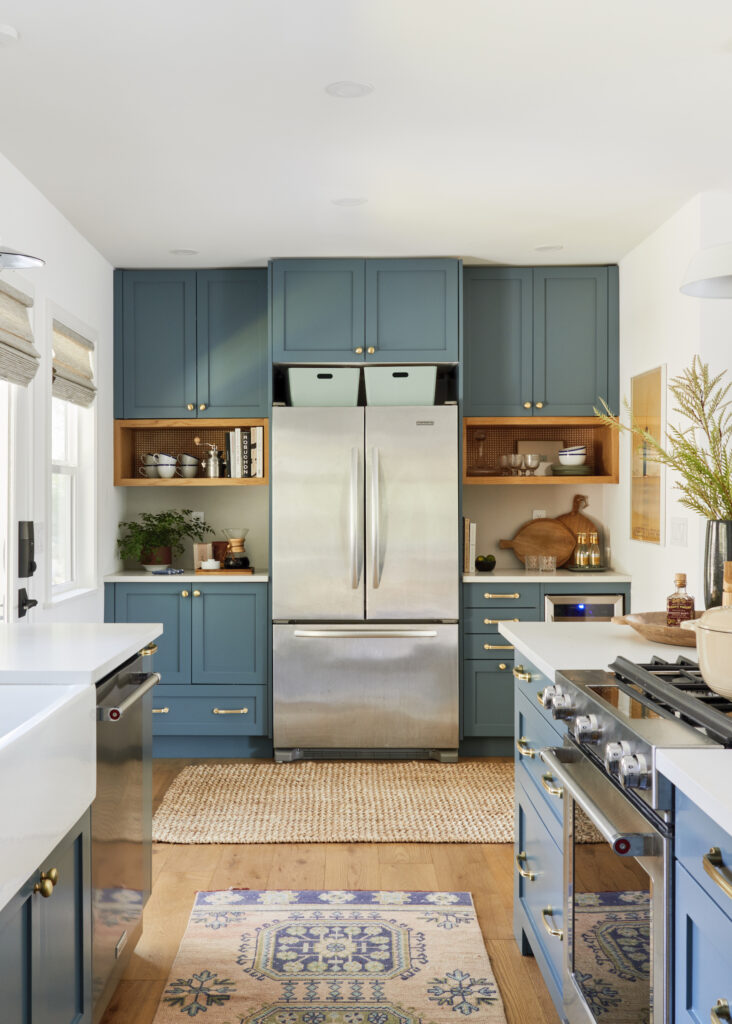 Since the couple essentially wanted to turn three rooms into one, structural changes were the first order of business. “I created a 3D rendering of their space and spent hours reconfiguring the layout to make it as functional as possible,” says Hellen. Aside from the KitchenAid fridge, Mer and Olly weren’t attached to anything in their galley-style cook space. Hellen ultimately ended up knocking down a load-bearing wall (a worthwhile splurge), vaulting the ceiling, and adding a large kitchen island to create the entertaining oasis they had in mind. She even managed to incorporate a wine cooler, separate cooking stations, and an outward-facing range. 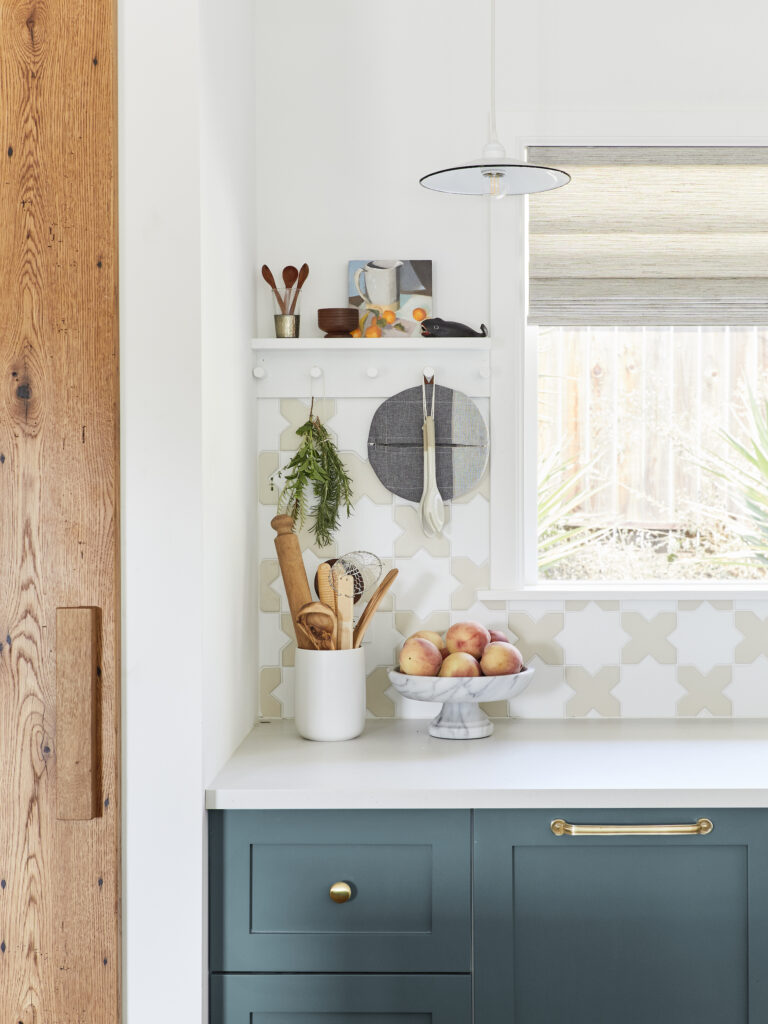 The couple had a long list of inspirations hailing from countless eras and regions across the globe. “They actually referenced boho style, Mediterranean, Scandi minimalism, English pub, and traditional farmhouse,” says Hellen, laughing. “I had to figure out how to blend all of these styles in a way that felt cohesive.” 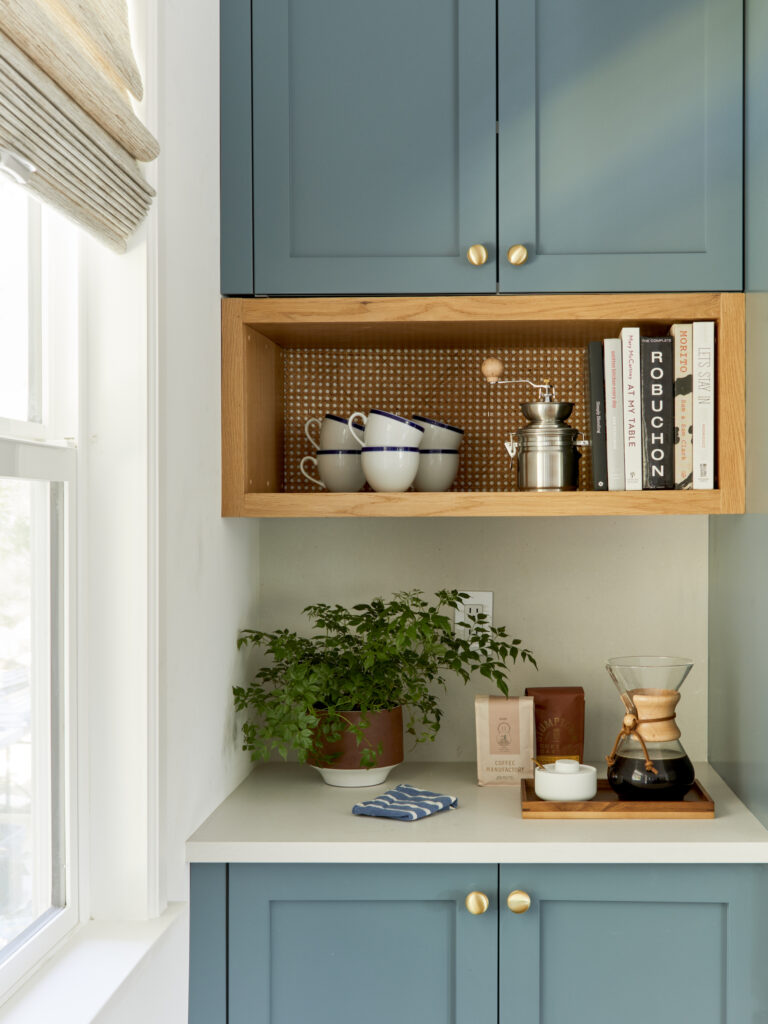 “So much of this project was spent deciding where to splurge and where to save, and defending those decisions,” explains Hellen. By selecting the big-ticket items up-front, she was able to determine exactly where to get scrappy. She spent top-dollar on a reclaimed pantry door, heirloom dining table, and luxe plumbing fixtures, and saved thousands on the Semihandmade DIY Shaker cabinet fronts, appliances, and shelving below the upper cupboards. “The caning was $25, and we applied it directly to the wall,” she shares. “It was a very affordable custom touch.” 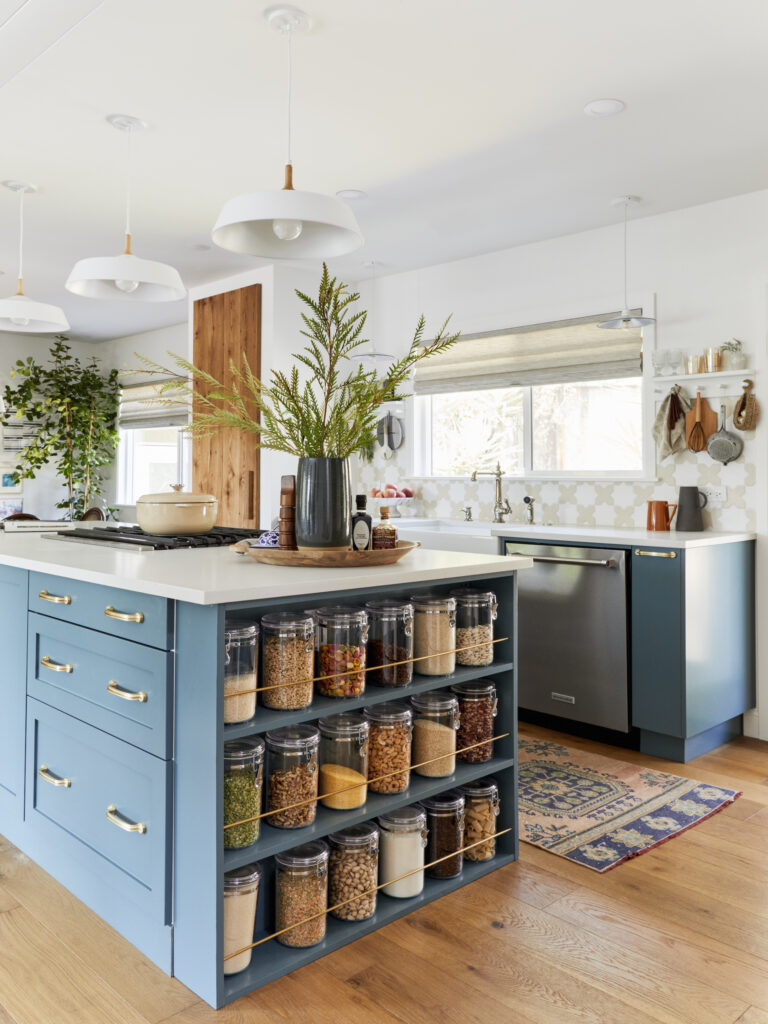 Hellen had to make up for the storage she lost when knocking down the dividing wall elsewhere. “Selecting furniture became a question of, ‘What can we hide in here?’” she says. The floor-to-ceiling pantry was a hero piece, but she also added custom IKEA built-ins to the kitchen island for spices and dried goods. “We even stashed overflow items in the entryway storage bench and the living room coffee table.”

Try Vintage For a Custom Feel on a Budget 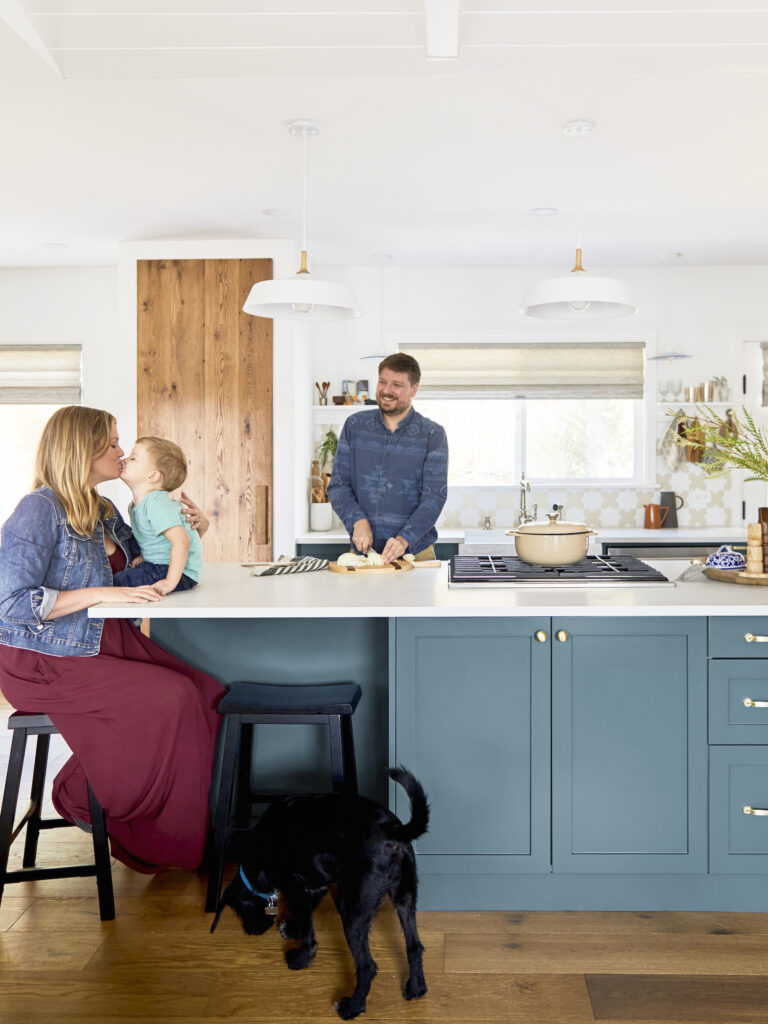 “I wanted Mer and Olly to feel like they worked with a designer, even if we couldn’t splurge on every item,” she shares. To nail that bespoke look, she peppered in a few vintage gems sourced primarily from Etsy, including the pendant lights, the runner, and the art prints. “Even the custom paint color helped create that personalized feel; it’s not your standard navy or sage,” she adds.

Finally, she threw out the design handbook when it came to the hardware. “Typical kitchens have knobs on every cabinet and pulls on every drawer,” she explains. “But we played around a bit and switched up the knobs, pulls, and double pulls throughout the space.” The resulting look adds to that personalized feel, even if it’s so subtle, only an expert eye would notice.