Vinanti Chauhan describes herself as a placemaker, dreamer, and interior designer, who loves creating homes hat are full of stories and meaning. Her latest project in Decatur, Georgia, for friends Monika and Kunj, who first admired her work on social media, features renovated living and dining rooms, plus a breakfast area.

Vinanti and Monika clicked immediately over their similar life paths. Born and raised in India, they moved to the United States in their early twenties and raised multicultural kids. “During the design intake process, I discovered that Monika wanted harmony in her environment, a sense of peace,” says the designer. “She also wanted original design with a punch of personality and cultural authenticity.” 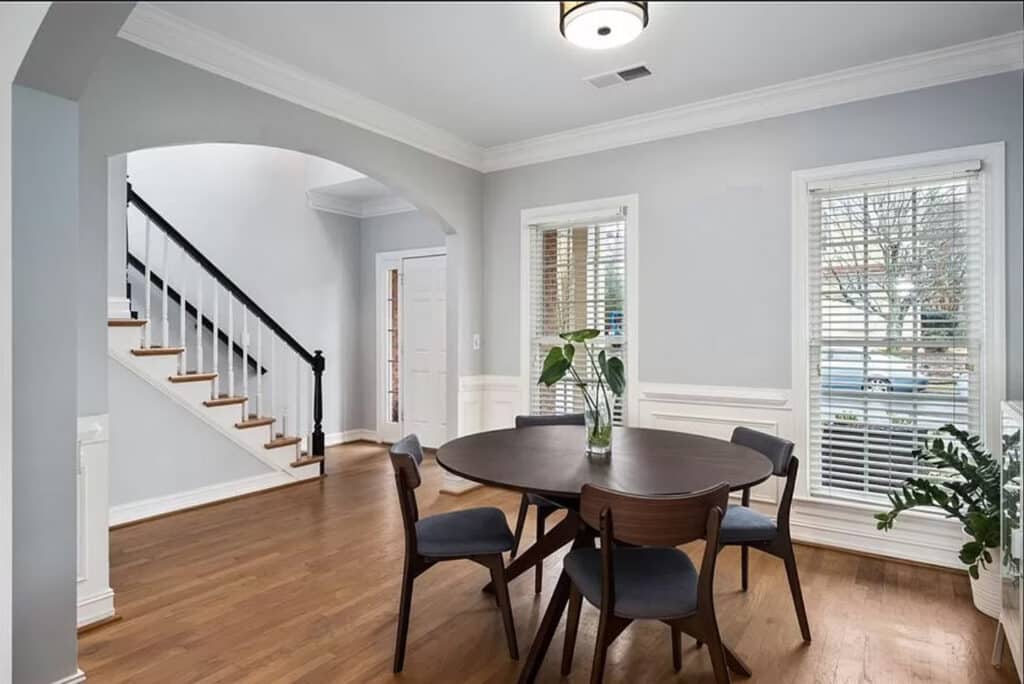 The couple were concerned that the house was not spacious enough for entertaining, specifically the dining room. “From the go, I was looking to expand the existing space through the use of architectural detail, light, and color,” she says. Another ask was room for storage and for displaying barware.

Before, the dining room was a “plain grey room in a cookie-cutter home with under-scaled staged furnishing,” she recalls. While it had beautiful natural light, it lacked personality. 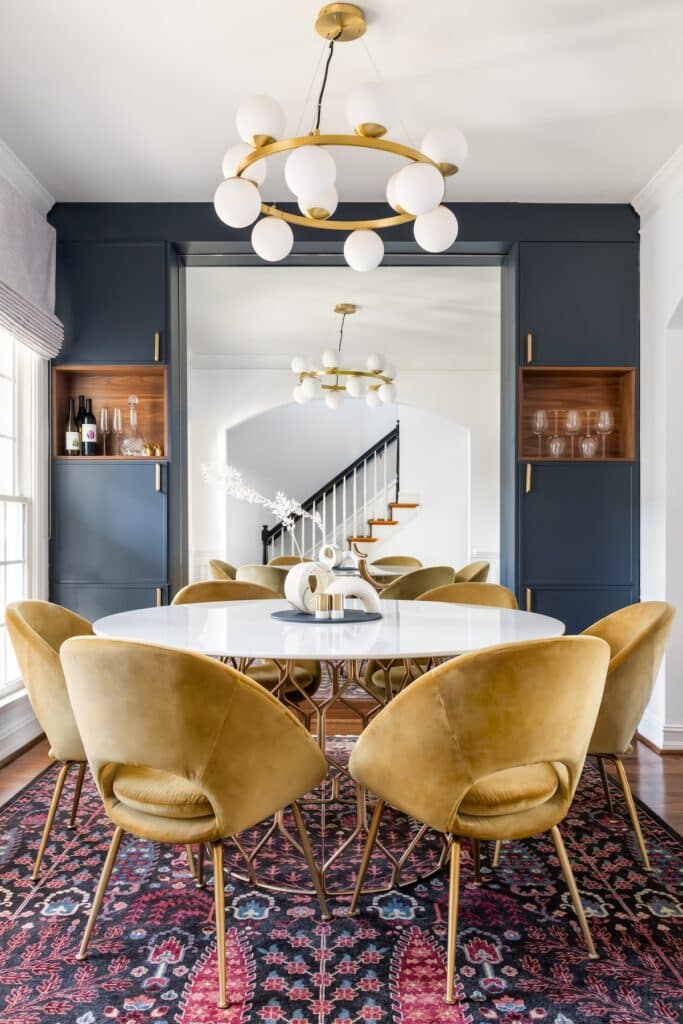 The designer looked to Semihandmade for a custom look on a budget. “I provided them with some renderings and detailed drawings with exact measurements,” she says. “They helped me with figuring out exact qualities of panels, trim, and edge banding needed.”

The dining room storage, which is built from IKEA cabinet boxes and Semihandmade Night Sky Quarterline fronts, was a perfect fit for the space. “The cabinets could only be 9″ deep due to the window locations,” she says. “Semihandmade doors and panels were perfect to give the IKEA cabinets a custom look.” Custom walnut niches, also crafted from Semihandmade panels and a large inset mirror, suggest an entryway with the two cabinet towers and bounce light. 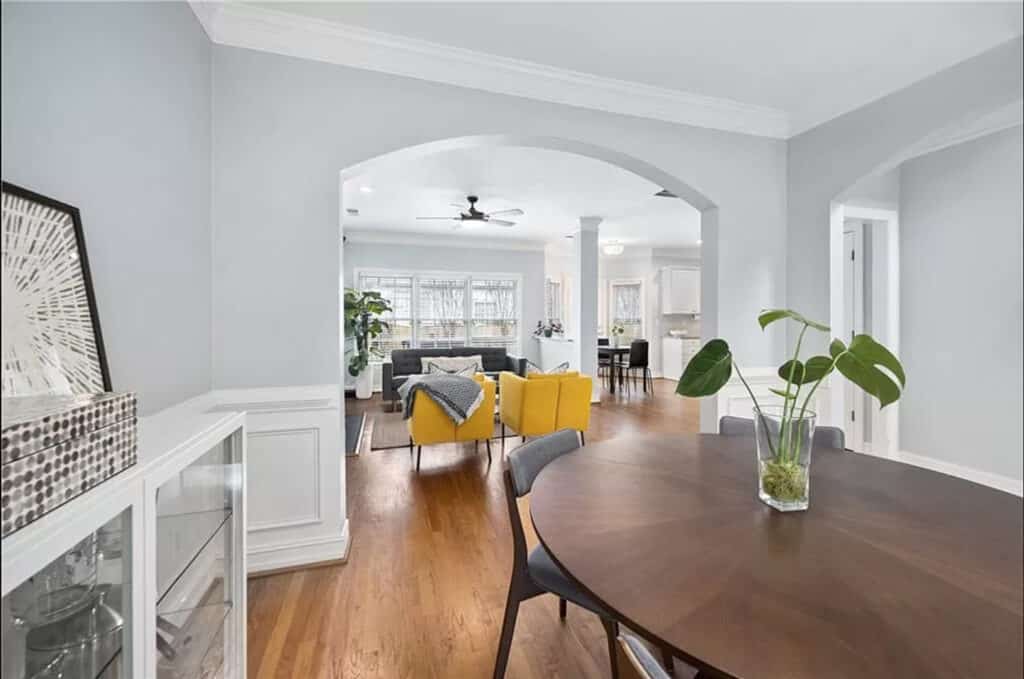 When it came to choosing the Night Sky fronts, the designer opted for a palette that would be playful yet not overwhelm the open floor plan. Spaces were unified by pulling color from one one to the other. For example, the living room’s burnt orange and blue tones are seen in the connecting dining room.

To make the most of the small dining room, she chose a round dining table. “It avoids creating a sense of hierarchy at dinner time,” she notes. “Traditionally, in Indian families the men eat first and the head of the family has a set spot at the head of the table. This idea is not embraced by many modern couples, especially those who have moved outside the country,” she says. 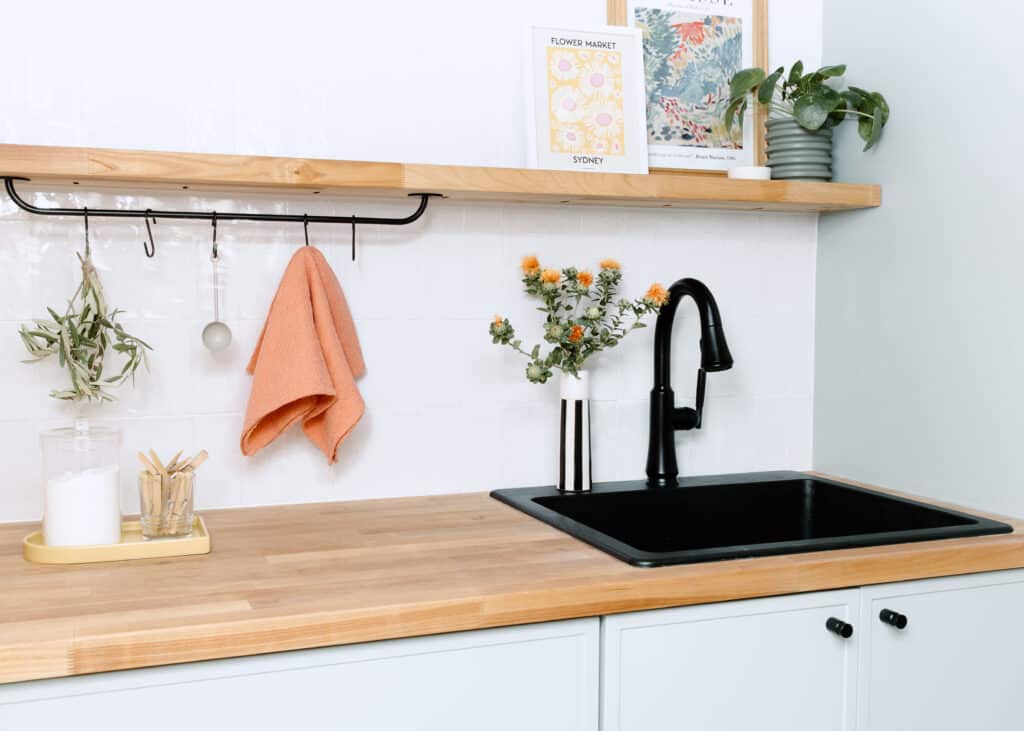