The minute after Patty Nasey’s youngest child left for college, she called architect and designer Anne-Marie Singer of AM Singer Design to start a fresh chapter.

She and her husband raised a family in a historic brownstone on New York City’s Upper West Side, and they had patiently waited 20 years to renovate. As empty nesters, they could finally dust off their plans and overhaul the kitchen.

Nasey always wanted to demolish the wall separating the kitchen from a small bedroom, since it had big windows with southern exposure. It couldn’t be done before—the bedroom was where one of her daughters grew up—but Nasey envisioned the new space as a relaxing lounge instead. It could occasionally accommodate an overnight guest or visiting child, too.

“Our goal for Anne-Marie was to figure out how to tear down the wall and create a big open room that could potentially be converted back into a temporary sleeping spot if somebody were to come home,” Nasey says. 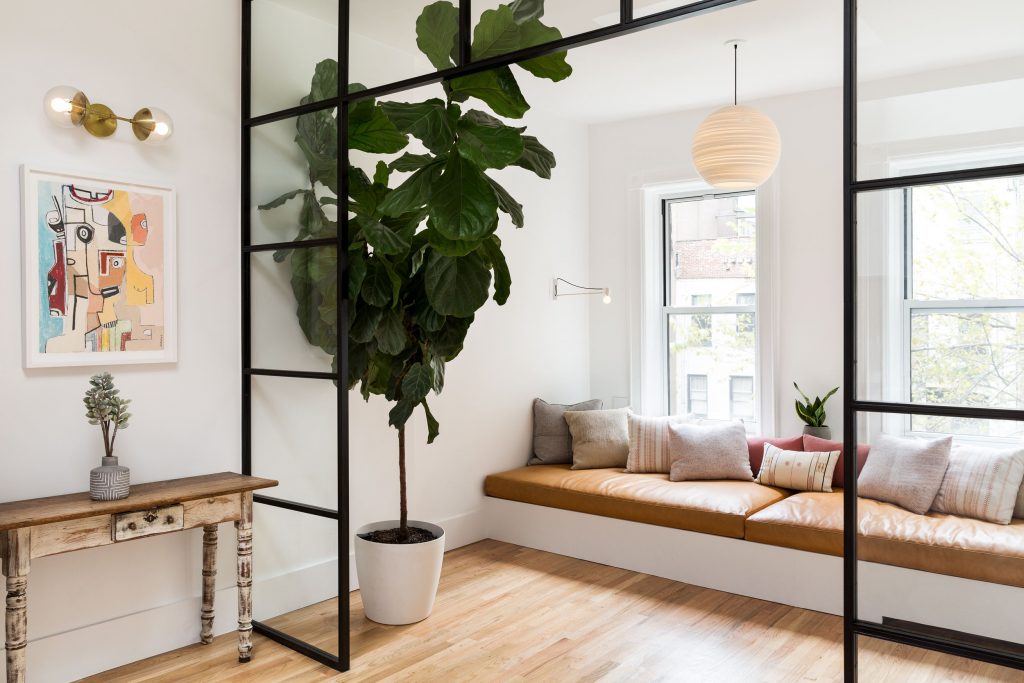 Nasey uses a magnetic, accordion-like Molo paper partition to close off the entry when someone is staying in the lounge. A white moon pendant by Graypants hangs overhead, with Benjamin Moore's Chantilly Lace on the walls.

The design process started on Pinterest, where Singer asked Nasey to identify photos that inspired her. “I tell my clients, ‘If you see an image and it speaks to you, send it to me,’” Singer explains. “I put everything together to distill a vibe and energy.” Once Nasey did some research, she and Singer were able to pinpoint a consistent theme. “We were calling it Danish-modern-meets-desert-calm,” Nasey says.

Nasey also showed Singer a Hilma af Klint print she wanted to hang in the room. Nasey had seen an exhibit on the Swedish artist at The Guggenheim Museum and was deeply moved by the collection. “She had such a beautiful story about how her paintings were all automatic and inspired from a higher power giving her divine inspiration,” Nasey remembers. “She painted whatever she was feeling without thinking. I was moved to tears.” 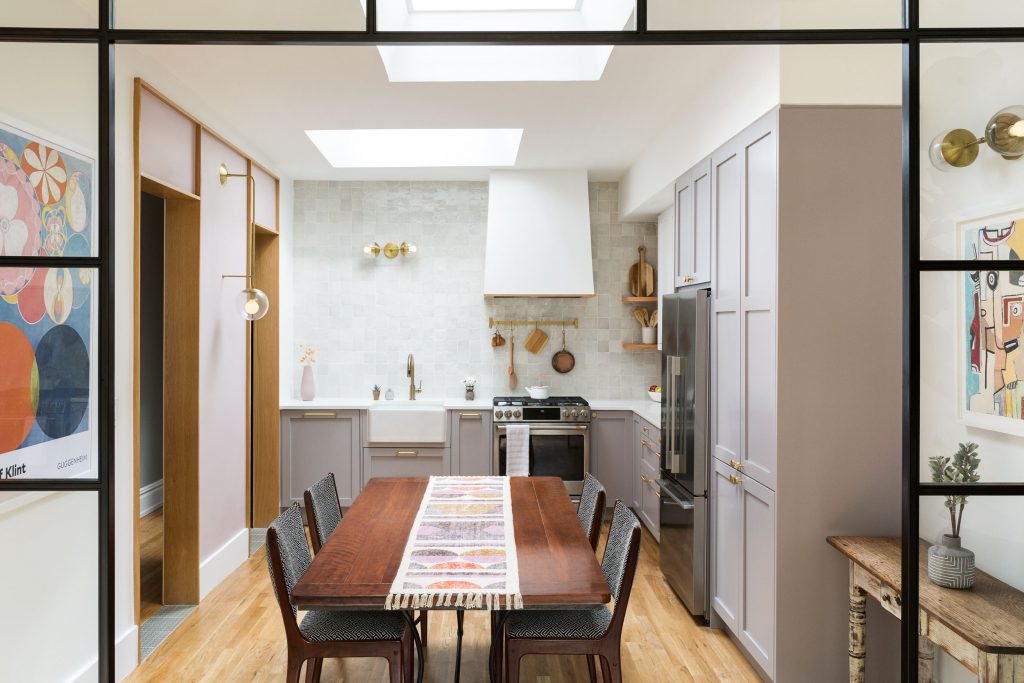 “Patty asked for a very clean and modern space, but wanted it to be welcoming and eclectic to the point of incorporating the older pieces,” Singer says. The dining table and chairs are sentimental to Nasey and her husband, who bought them when they first moved into the apartment.

She and Singer agreed that the colors in the print should inform the decor, which is how they decided on painting the entrance wall Benjamin Moore’s Porcelain. The mauvy pink shade matches the palate and playfulness of the af Klint piece. The same wall also features a minimal white oak molding and trim around the doorways as a nod to the transom window, a pre-war architectural detail that can be found elsewhere in the apartment. Singer wanted to provide a smooth transition from the older finishes into the more modern design.

The floors needed a transition from old to new as well. Years before Nasey and her husband bought the apartment, the original white oak floors in the kitchen were hidden by layers of concrete and tile. While the couple originally wanted to restore the wood, it was too damaged to be salvaged. They decided to put in new white oak, but it wouldn’t match the original floors that existed in the hallway.

“We had to come up with a creative idea of how to transition at the doorways,” Singer explains. “It’s the same species of wood, but there is probably a hundred years of age difference and wear and tear, so there’s no way to get them looking exactly the same. We ended up using a little detail of tile to demarcate between the old floor and the new floor.” They went with Roca Tile Havana Retro, which has an intricate pattern. 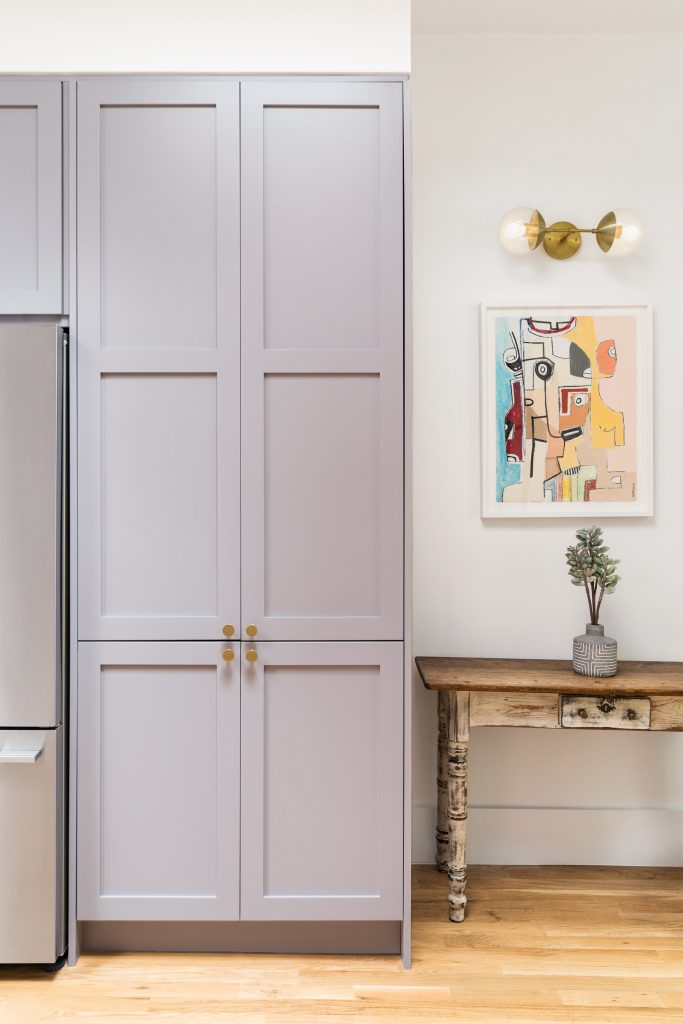 Nasey and Singer chose brass hardware from brand Cedar & Moss, and paired them with Tanis pulls and Jane knobs to complete the look. 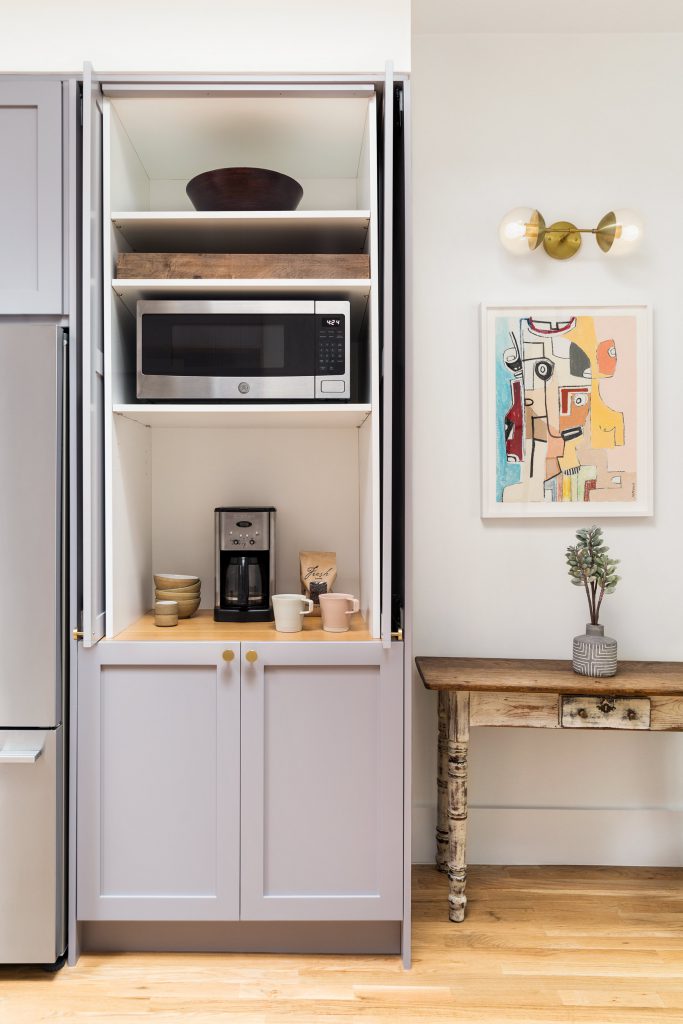 Nasey didn’t even know she wanted a coffee station before the renovation and now it’s one of her favorite elements. It sits beside a beloved farm console and a painting by Anton, an artist Nasey discovered at BO’s Bagels in Harlem.

Semihandmade’s Shaker cabinet fronts are yet another balance between a traditional build and a fun finish, which is courtesy of Benjamin Moore’s Silver Dollar. “We didn’t want it to look outdated in two years,” Nasey says. “That’s why we did the Shaker doors, which are very classic and fit the theme.”

Since the original kitchen was very cabinet-heavy, Nasey wanted to make sure there was more open space after the renovation. She asked for only a couple of upper cabinets, so Singer devised a pantry to make up for the lost storage. “We also sought to hide their everyday appliances, like the microwave, blender, and coffee machine,” Singer says. The pantry doors can recess fully, and reveal a coffee station anchored on butcher block. It’s become a treasured aspect of the couple’s daily routine. 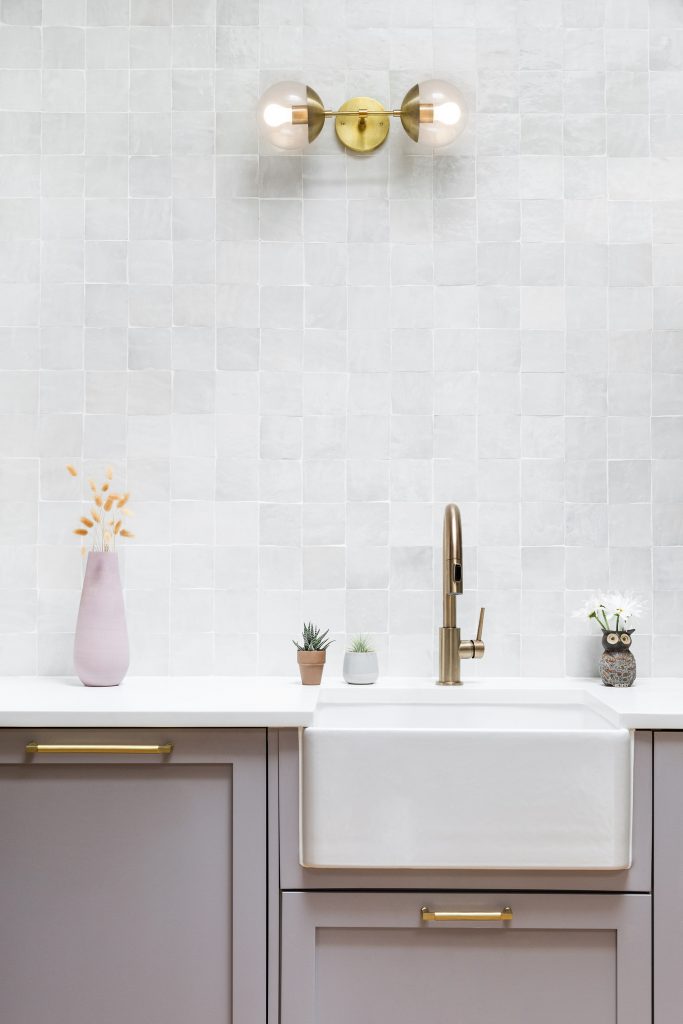 A Theo sconce from Cedar & Moss illuminates the wall above a Reinhard Fireclay farmhouse sink and a Delta faucet in matching champagne bronze. Nasey and Singer picked a Caesarstone quartz countertop in pure white to create a bright finish.

The other showstopper in the room is the counter-to-ceiling Clé Weathered White Zellige Tile backsplash. “We had no backsplash before,” Nasey says. “We were so excited to have one in the first place, but then to have it go all the way up to the ceiling was really fun.” The material changes color through the day, Singer adds, making it look stunning in both natural and artificial light.

For appliances, Nasey and Singer went with a GE Café Series range, a panel-ready Bosch dishwasher, and a Fisher & Paykel counter-depth refrigerator. “I just totally fell in love with the fridge,” Nasey says. “The original plan had panel doors, but I just thought it was such a cool looking fridge. We decided to scrap the panel doors and keep it visible.” She also added a garbage disposal, which she notes is very rare in New York City. 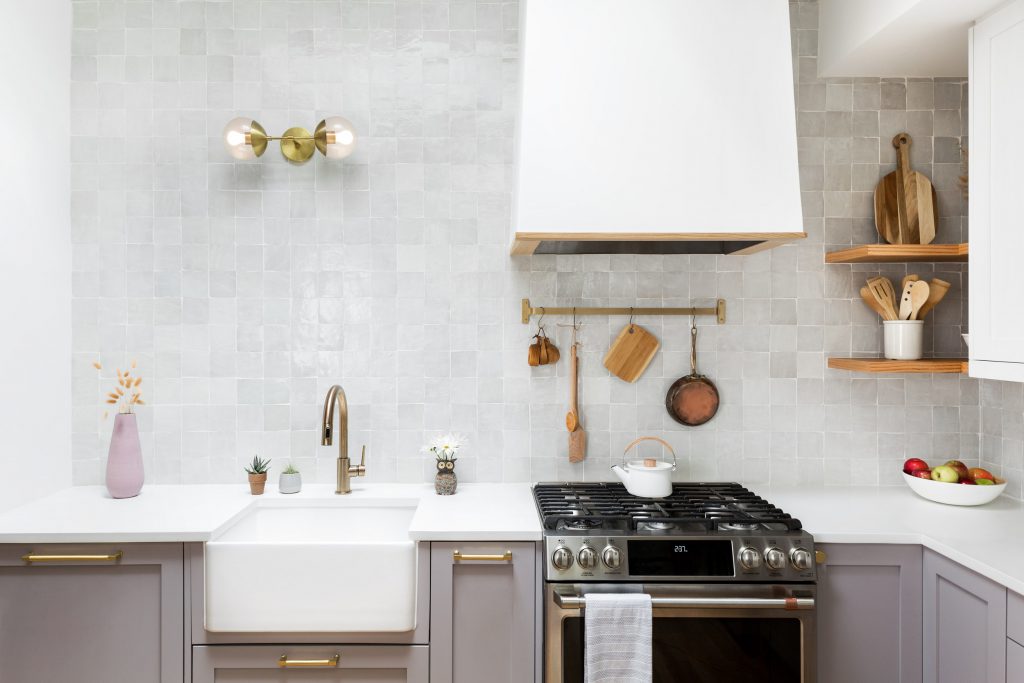 “We decided to conceal the range hood so that the space had more of a design element than an everyday kitchen. It’s just white with a little oak wood detail at the edge to give it some warmth,” Singer says. 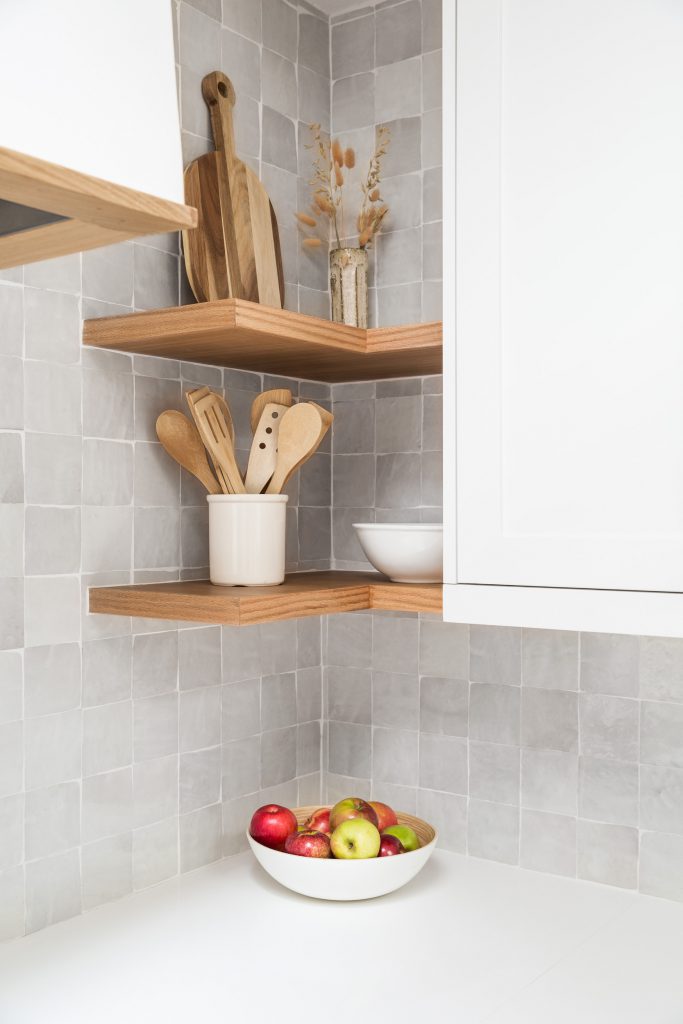 Nasey and her husband debated installing open shelving. Ultimately, they decided that prominent open shelves would be too trendy for them, but they still wanted to display some key objects in the corner. White oak shelving did the job.

When it came to imagining the lounge, Nasey wanted to separate the two areas without blocking any of the light. Singer suggested a steel-and-glass portal, and she found a Brooklyn-based artist to build it. The industrial divider leads to what has become the go-to spot for relaxing, reading, and napping. “We weren’t sure that we would use it that much, but we absolutely love it,” Nasey notes. “It has no TV, but we put in a Sonos speaker. My husband and I will sit there after dinner and enjoy the lighting.” 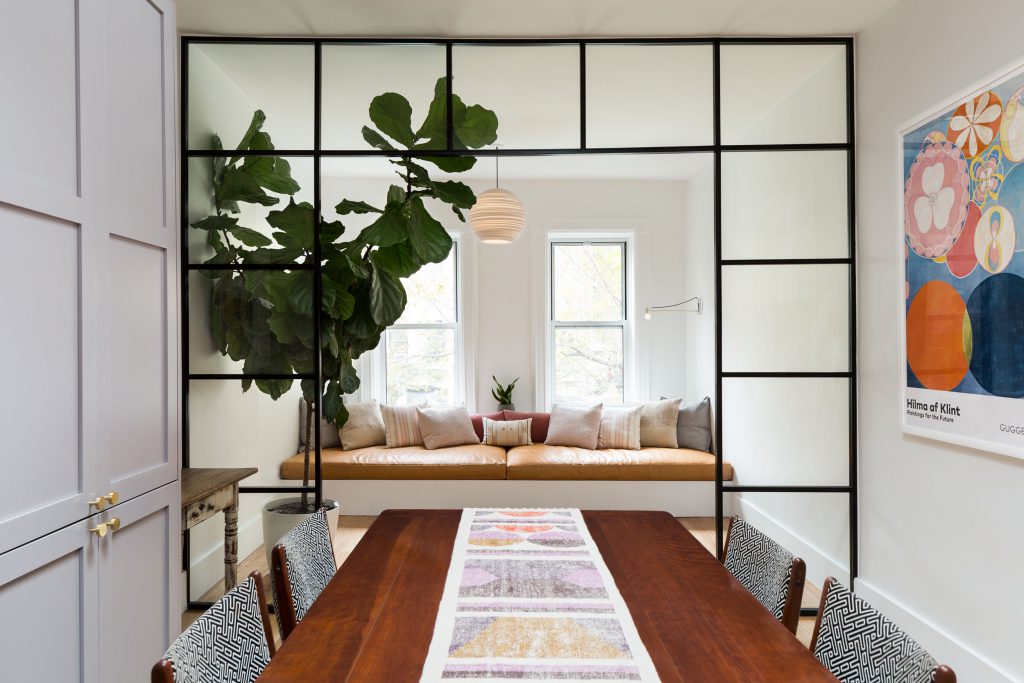 “Anne-Marie was able to take my little germ of a theme and execute it so beautifully,” Nasey says.

To create the lounge’s long banquette, Nasey got scrappy. Cushions were prohibitively expensive, so she sourced the material herself from Global Leathers in the Garment District for a steal. “I ended up going down there, paying for a couple of hides, and taking them on the subway to Stitch NYC Inc. at the Brooklyn Navy Yard,” Nasey says. She adorned the seat with a variety of pillows from The Citizenry.

Nasey describes the new space as a magical transformation—and it was well worth the wait. “Those windows were blocked for all of the 20 years we lived in the apartment,” she says. “To see the seasons change and the light is so wonderful.”