Michelle Salz-Smith knew that her clients’ 1959 Solana Beach vacation rental would need to stand out on the web in order to dazzle travelers.

“I told them, ‘If you’re going to put this online, you need a hook’,” remembers the San Diego-based interior designer and founder of Studio Surface. That hook was blush cabinetry—Farrow & Ball’s Setting Plaster, to be exact. To do this, Salz-Smith replaced the old mid-century cupboards with IKEA bases and Semihandmade DIY Slab fronts.

The designer was careful to avoid tropes like trendy Millennial and vibrant mid-century pinks, selecting instead a dusty, putty-like shade for its depth and timelessness. “We call it dirty pink,” she describes. “It’s a complex, cool color. There’s a little bit of grit to it. It’s not too precious or too pretty. “The subtle but daring hue informed the rest of the house’s palette, where Salz-Smith swapped out dingy carpeting, linoleum, and outmoded appliances for modern fittings that would simultaneously offer effortless West Coast vibes and endure an endless cycle of visitors. 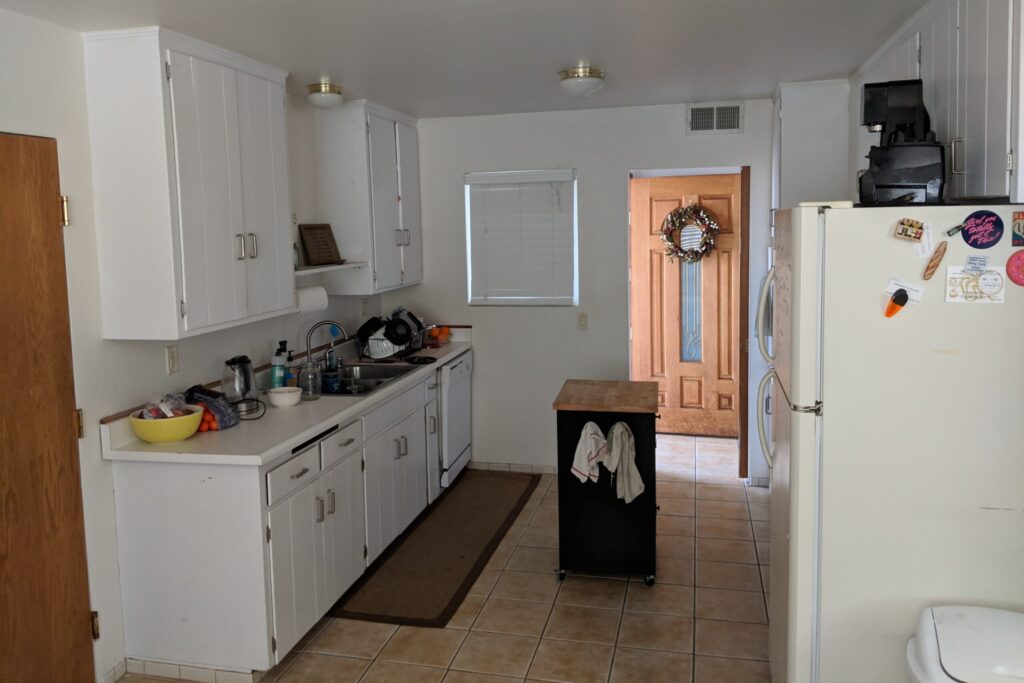 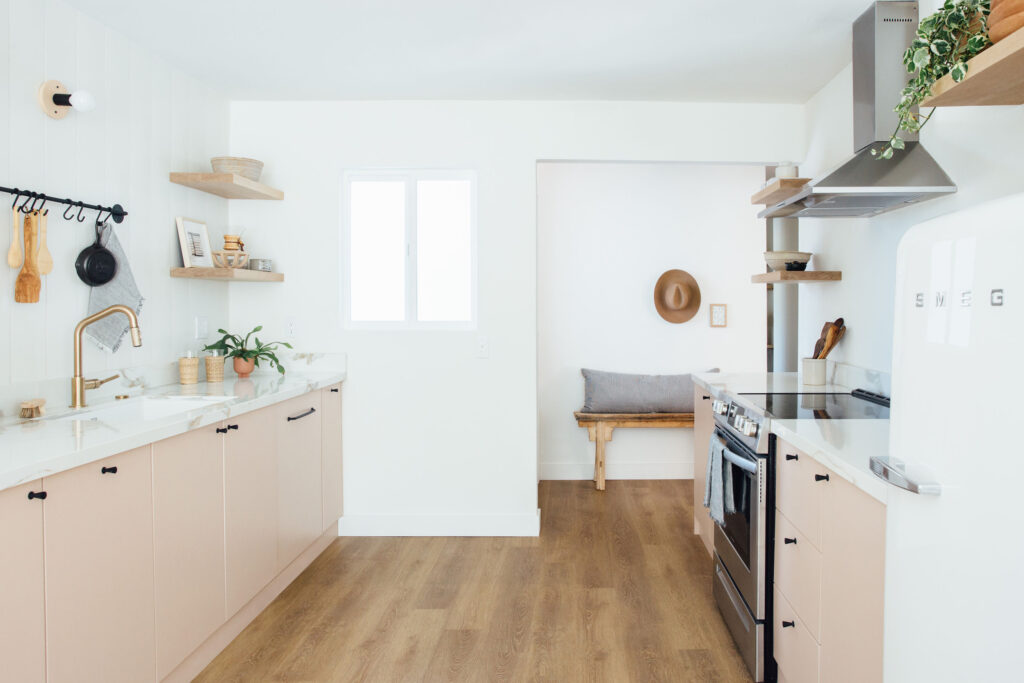 Though Salz-Smith prefers natural stone and wood to their synthetic counterparts, she had to make concessions to her typical design philosophy in order to construct an indestructible home for hosting. She researched far and wide for a countertop that could pass for real marble, and Duchateau luxury vinyl tile, which has the variation and texture of real timber. “I don’t like using a material that tries to be something other than what it is, but in this particular situation, it made sense to do so,” Salz-Smith explains. 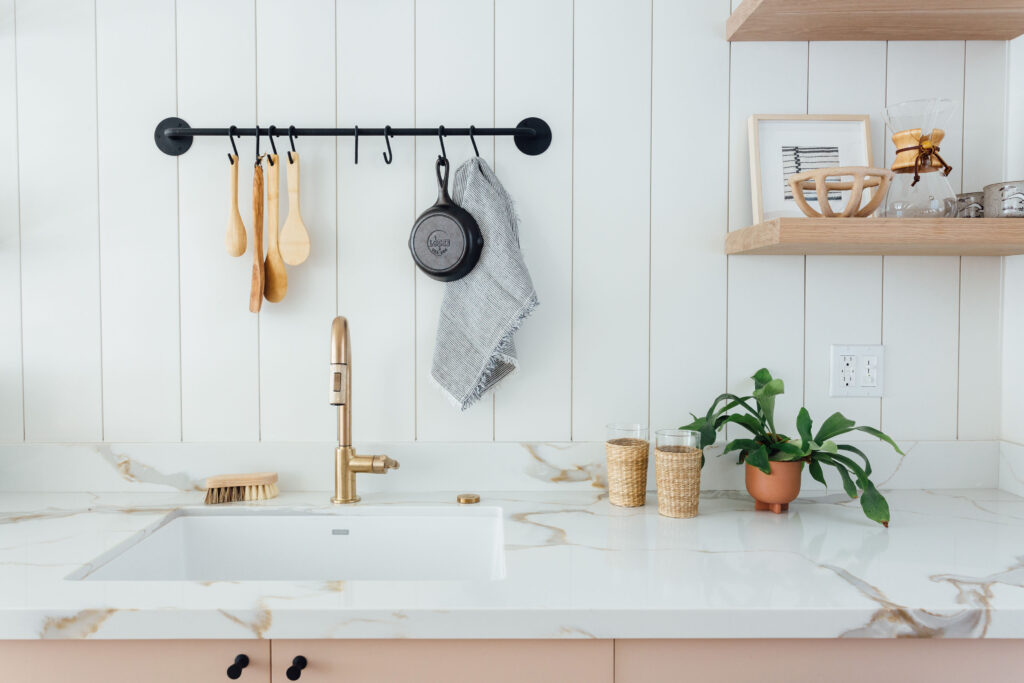 To offset these practical choices, Salz-Smith updated a few key elements that would create a sense of luxury. First, she convinced her clients to invest in retexturing the walls, a pricy process that includes hand-troweling by an expert. “Orange peel screams cheap rentals,” she says.

Salz-Smith also went with matte black hardware throughout the house, including door handles and hinges. “When it comes to anything you touch, it needs to feel substantial,” she insists. “The black makes it feel more bespoke and more intentional.” 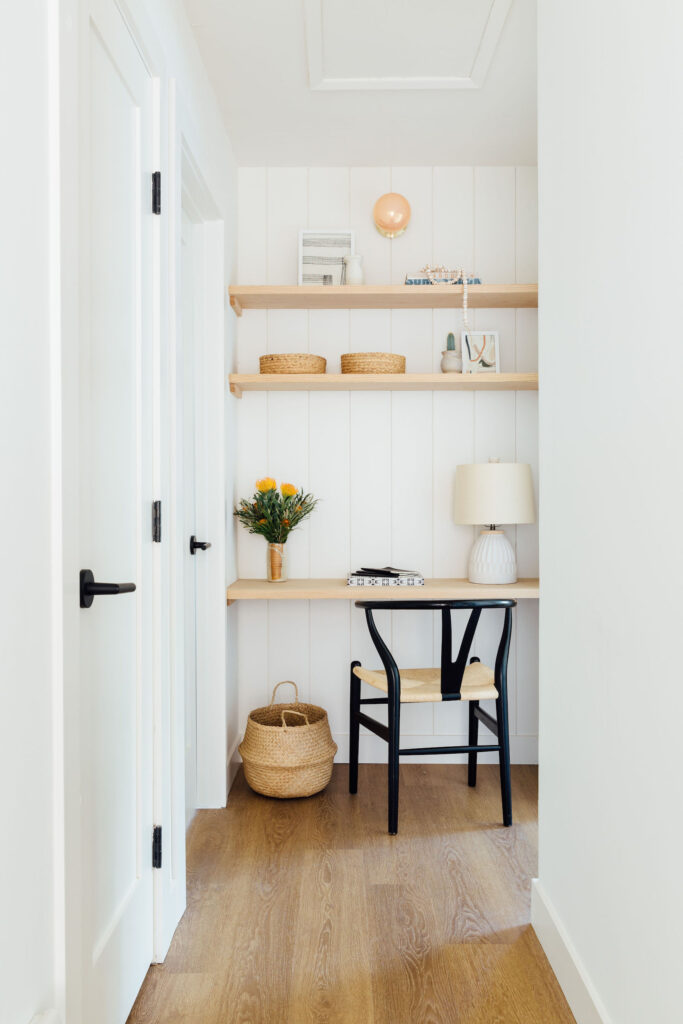 A clever floating desk in place of a former closet adds a custom touch, as well. Inspired by the study surface found in most hotel rooms, Salz-Smith wanted to craft a curated spot for checking emails and displaying the guide book and WiFi password.

Looking to the Past 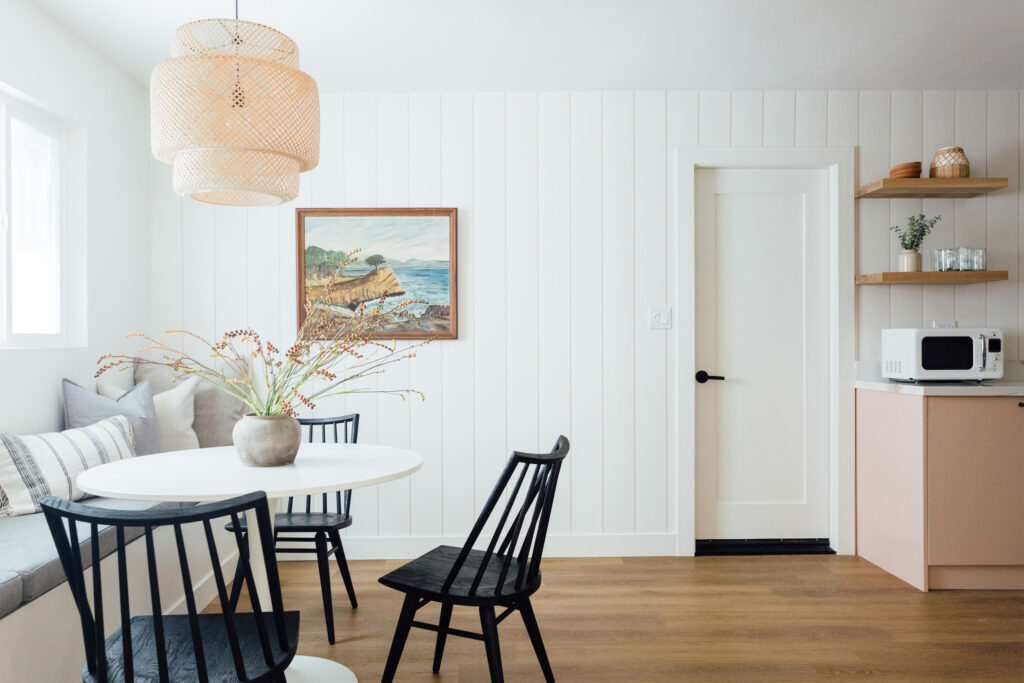 In the office nook and kitchen, Salz-Smith installed vertical, tongue and groove wall panels which appear as if they might have been part of the original construction and were recently refreshed with a coat of white paint. “We wanted it to come across as existing to the home,” she says. 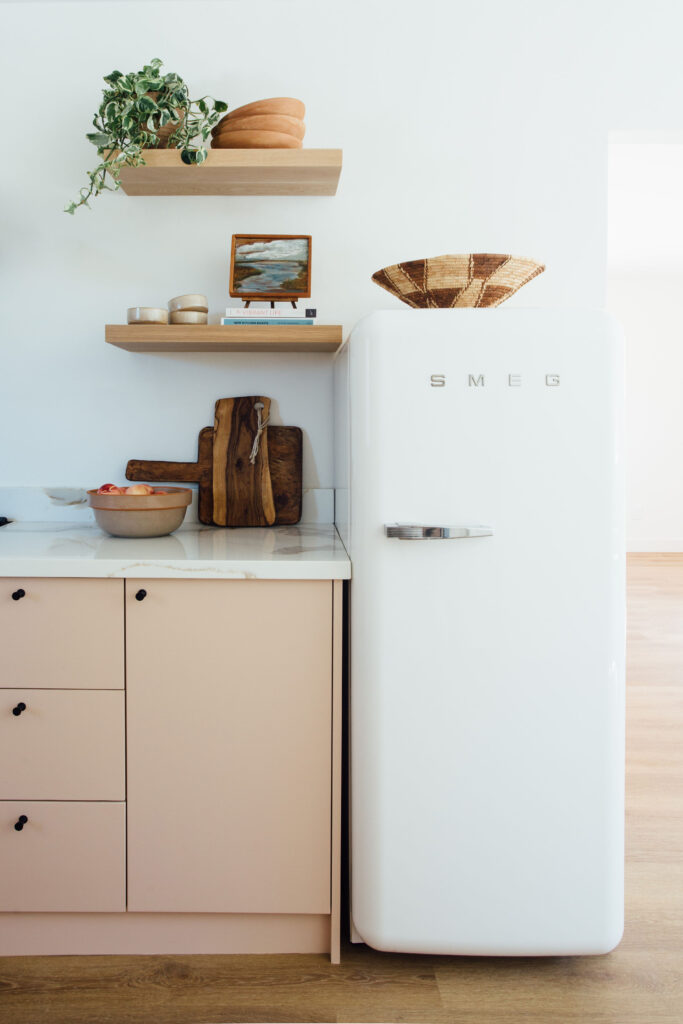 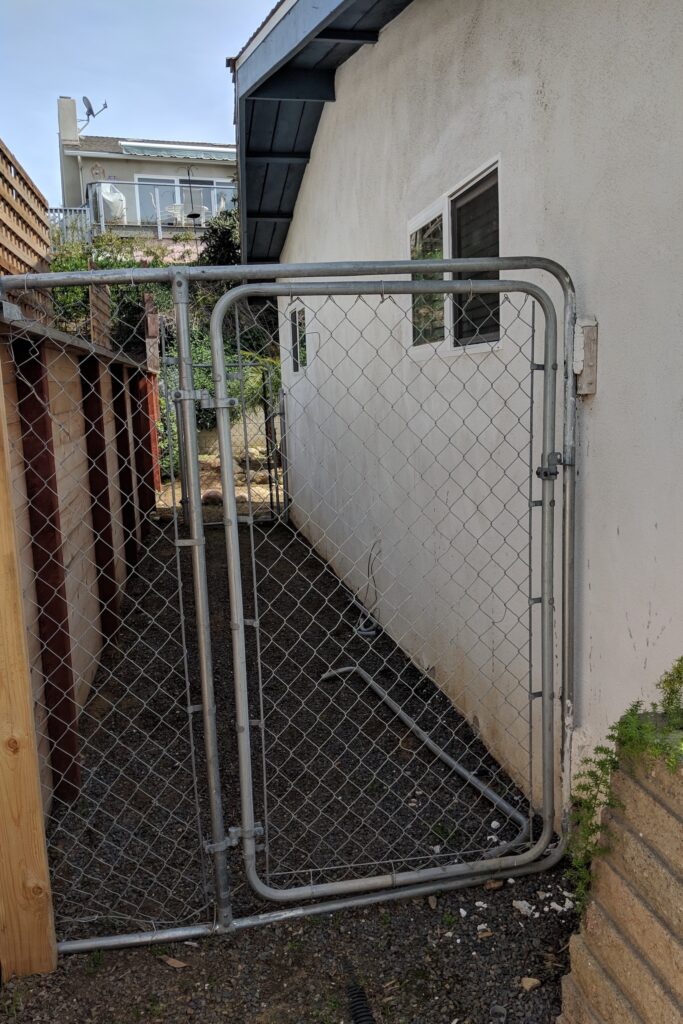 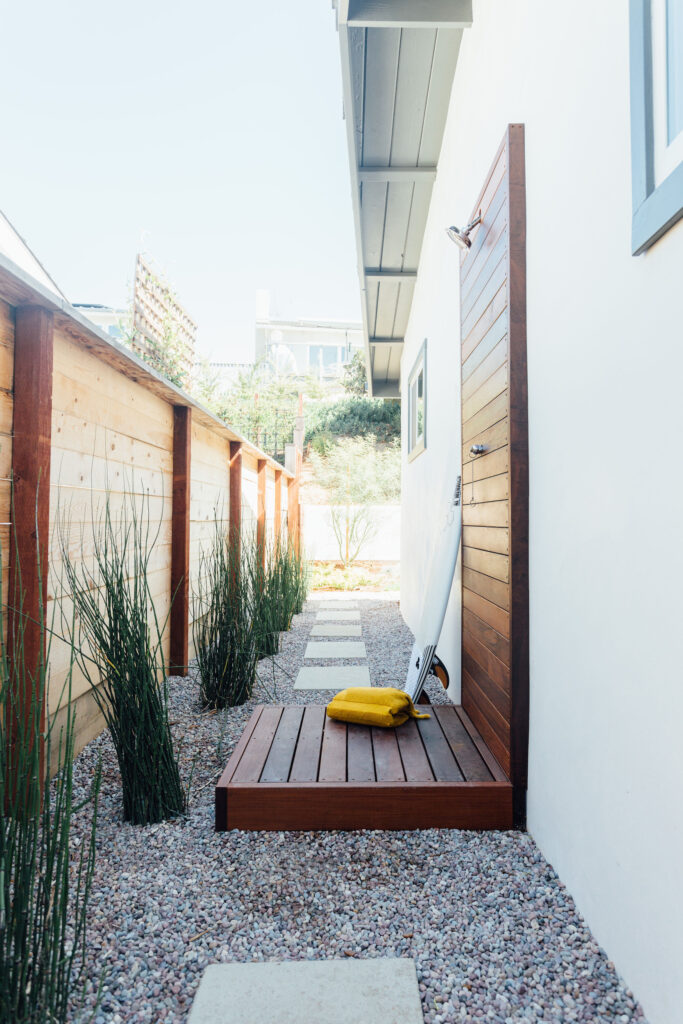 It wouldn’t be a California getaway without a welcoming outdoor area, so Salz-Smith repaired the existing patio and painted it in a soft terracotta tone to connect with the cabinetry. She also replaced the rusty chain-link fence for a new wooden one and landscaped with tall, grassy bushes and cacti. As a finishing touch, Salz-Smith built an ipe outdoor shower for a quick rinse after surfing in the nearby ocean. What more could a traveler want?