When two New York creatives purchased a 1955 post-and-beam house built into the lush hills of the Pacific Palisades, they had no choice but to honor its origins.

The couple enlisted Los Angeles-based interior designer Natalie Myers to reimagine the dated space with a mid-century style renovation and infuse the house with her signature “Scandifornian” aesthetic: a combination of minimal, Nordic finishes and natural, West Coast materials.

To blend the two worlds, the Veneer Designs founder started off by replacing the pale, lackluster stain on the wood-paneled ceiling with a crisp coat of Winter White by Benjamin Moore and painted the beams a contrasting charcoal grey to draw attention to the original structural feature.

Myers also switched up the layout, tearing down a dividing wall to open up the kitchen to the living room and closing off an entrance to the hallway to make room for the refrigerator and range. She eliminated the existing peninsula and added an island. Such functional updates combined with retro-meets-artisan decor create a window into the past that’s filled with modern conveniences. 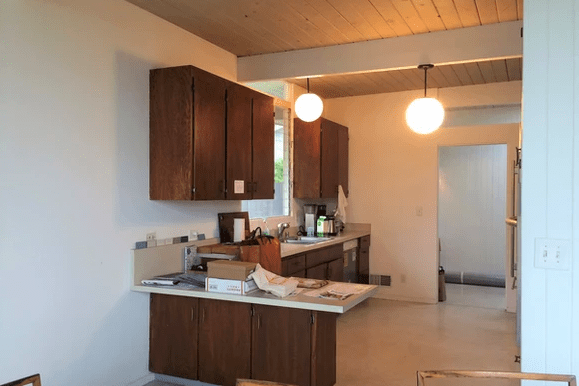 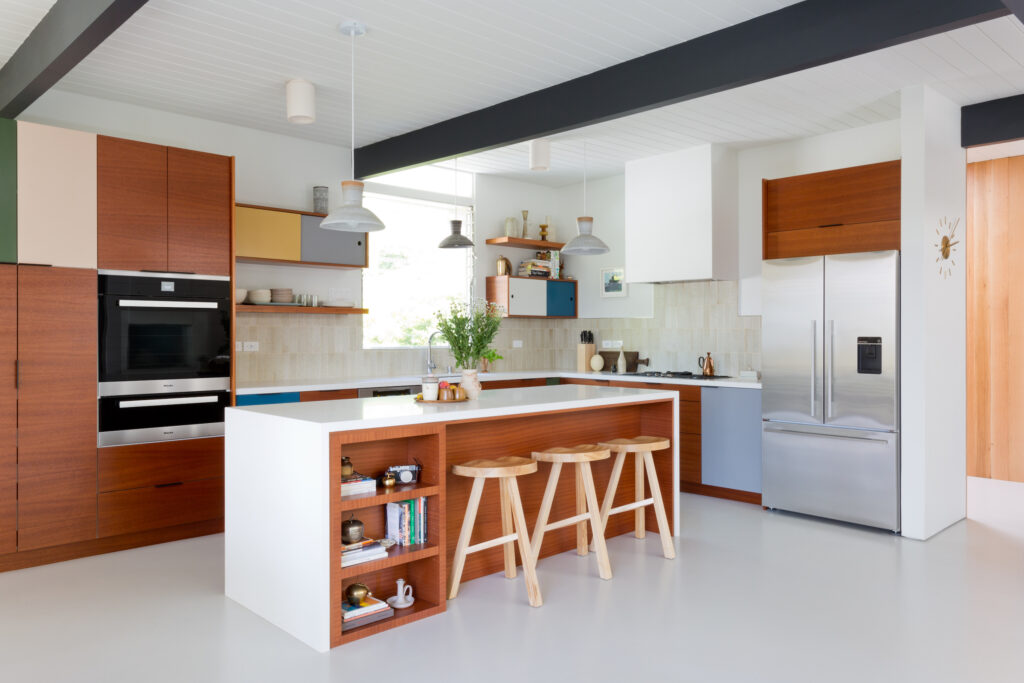 Myers swapped the old plywood cabinets for an IKEA base system and a striking mix of Semihandmade mahogany and DIY Slab fronts in a muted rainbow of hues inspired by Dutch artist Piet Mondrian. The color-blocked cupboards in shades of peach, teal, dark green, grey, and mustard add a playful touch. “The owners are both very visual, so they had specific shades that they wanted,” Natalie explains. Blues continue throughout, gracing the bedroom doors and the earthy, glazed brick tiles that cover the floating plinth lining the original concrete fireplace. 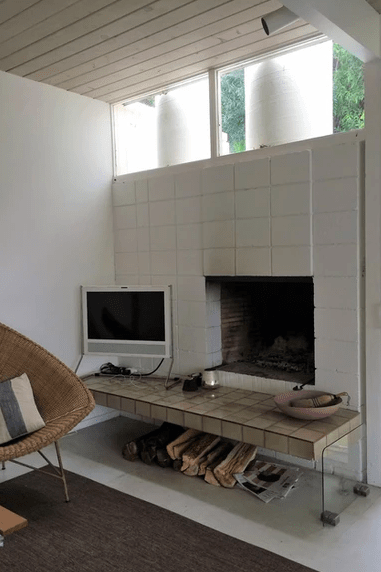 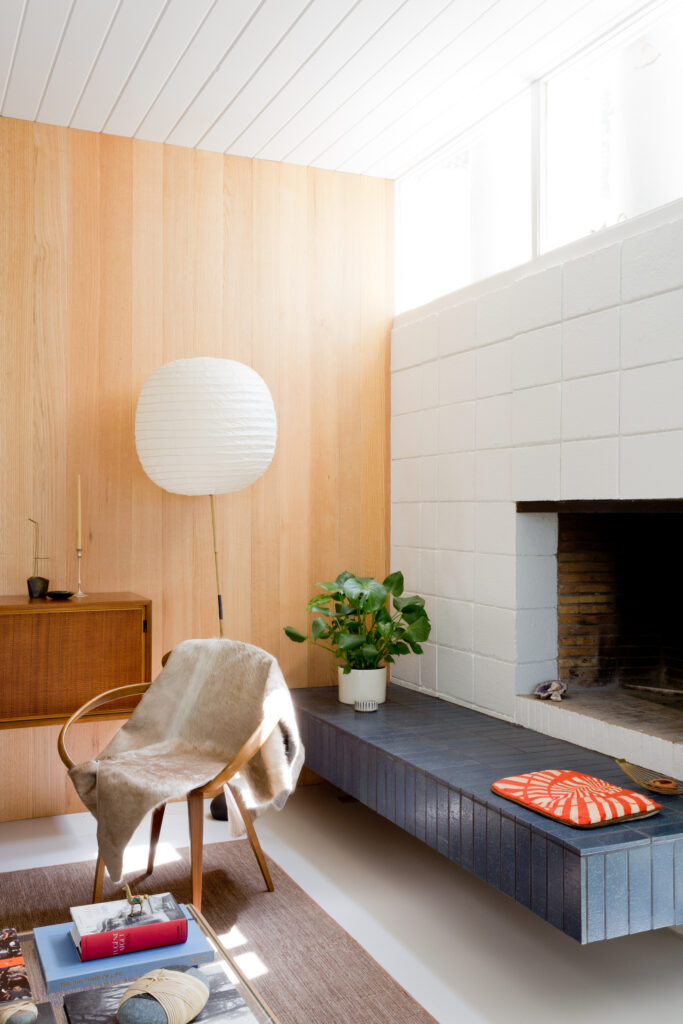 Instead of ripping up the floors, Myers opted to top the existing epoxy with a fresh layer of the resin compound. Then, she balanced out the sleek, matte gray surface with custom red oak paneling on the walls. “More mahogany would have read too heavy, so we went with red oak to add texture and warmth.” 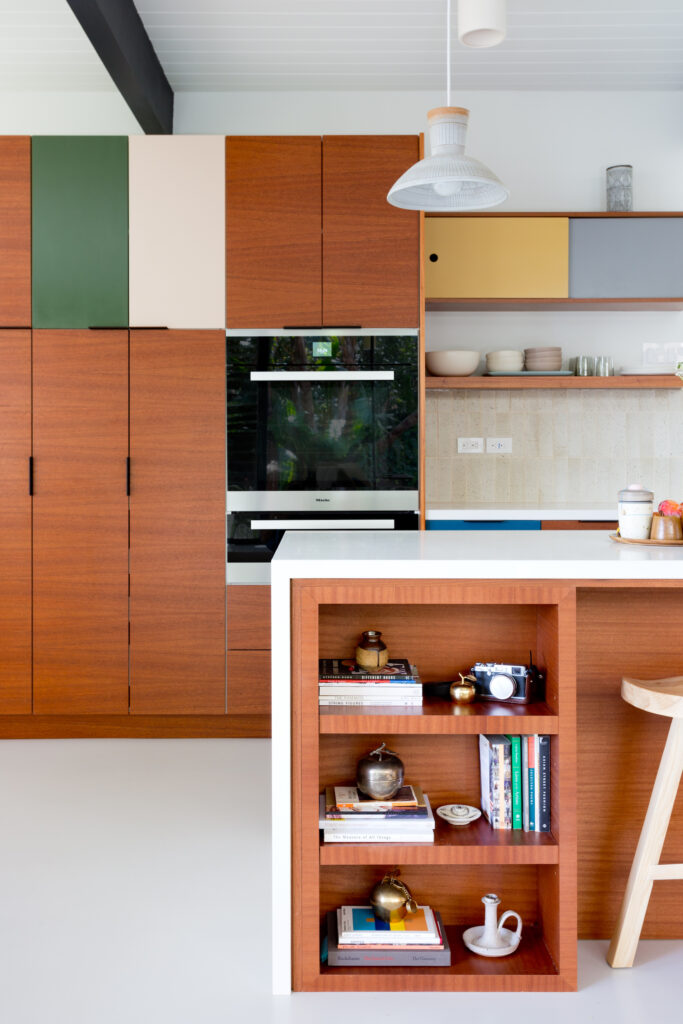 Playing off the clients’ affinity for the handmade movement, Myers chose speckled Caesarstone countertops and an imperfect, oatmeal Clé Tile backsplash. “It has a studio pottery feel to it,” says the designer, who also commissioned pendant lights by ceramicist Heather Rosenmean. “They will become heirloom pieces.” The three fixtures are intended to represent the homeowners’ children, and each of them will inherit one in the future. “I thought it was such a sweet gesture and a really precious moment for the kitchen. It makes it really personal.”

Staying True to the Home 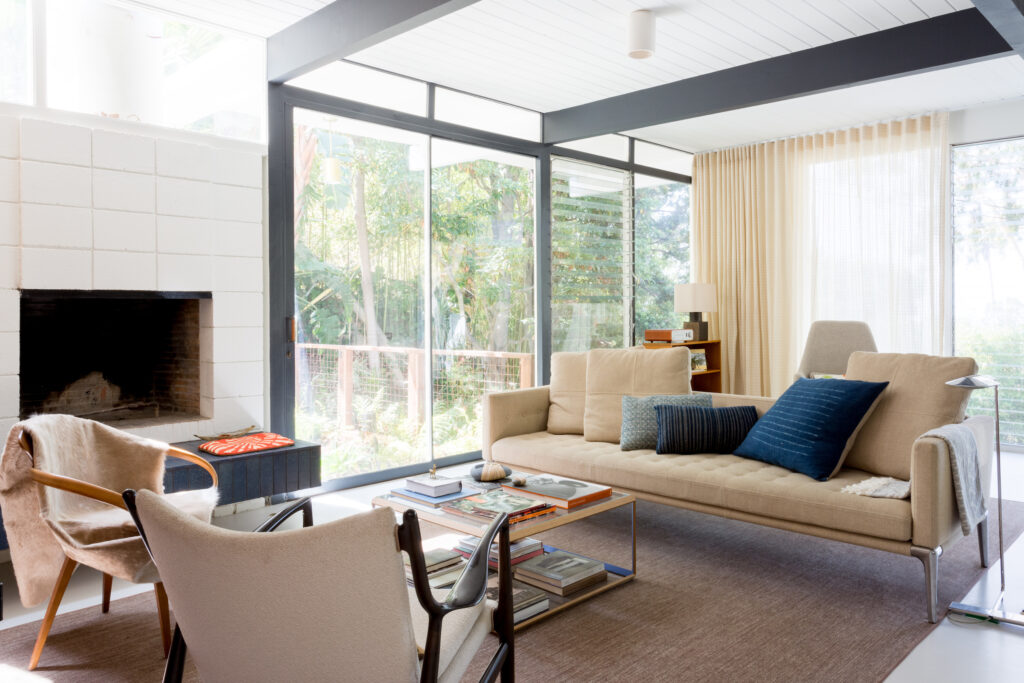 Small details and big-ticket items alike serve to salute the house’s mid-century construction. Even Myers’ subtle faucet choice is a nod to the era. “I stick to what was original,” she says of the chrome finish which would have been standard in the 50s and 60s. Vintage finds like a wall-mounted Knoll credenza, an oversize Nelson Saucer Bubble Pendant, and a pair of Finn Juhl chairs add to the theme, looking like they inherently belong. Set against the original sliding glass doors and louvered windows where a dramatic, tweed-like curtain filters the light, they overlook the oldest feature of the entire property: the sweeping treetop views. 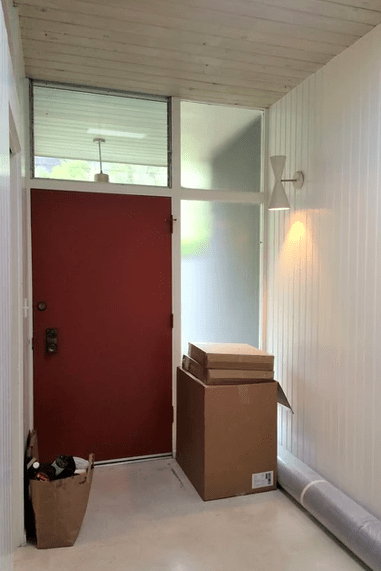 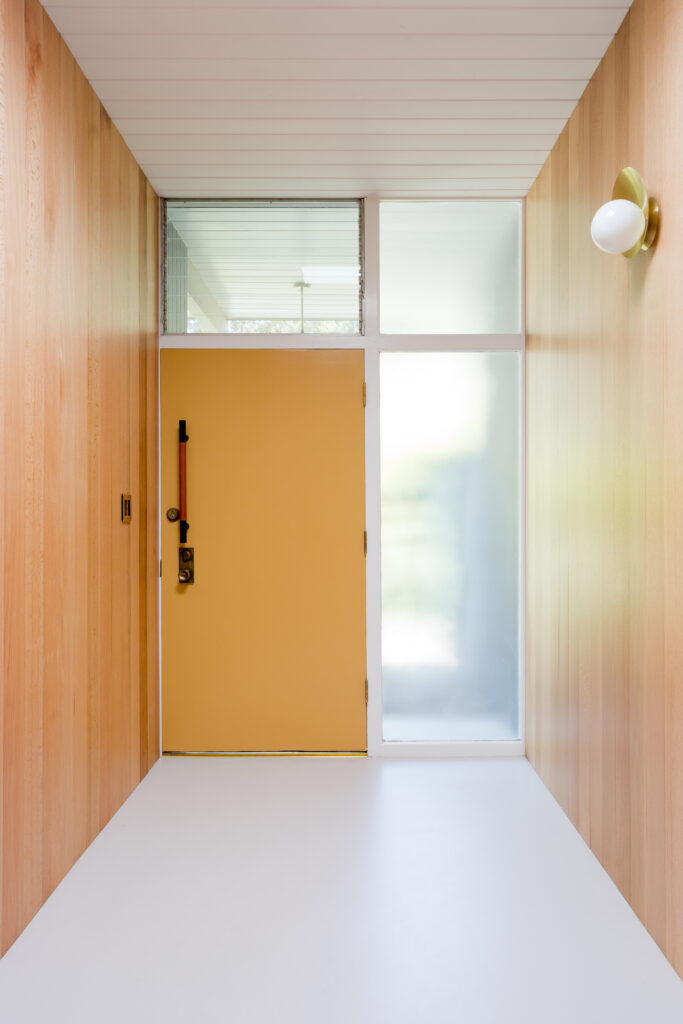