“It was a diamond in the rough,” recalls interior decorator Katie Woodman of the 1975-built split-level home in Fort Collins, Colorado she and her husband, Joseph, who are both avid renovators and DIY’ers, purchased. While their realtor wasn’t initially convinced of its potential, they could see past its rough facade, orange, floral carpeting, dark wooden cabinetry and stained glass light fixtures.

Over the last three years, the pair have been remodeling rooms one-by-one, but saved the kitchen for last. “When COVID hit, we did an initial facelift and painted the dark walnut cabinets white, but after a week we knew we wanted to go all in and make it our dream kitchen,” she says.

They knocked out the wall that separated the kitchen from the living room, created an entirely new layout and made room for more storage, plus a large island. “I wanted a massive island,” she says. “We now have a 9-by-5 quartz island and it was one of my dream features.” 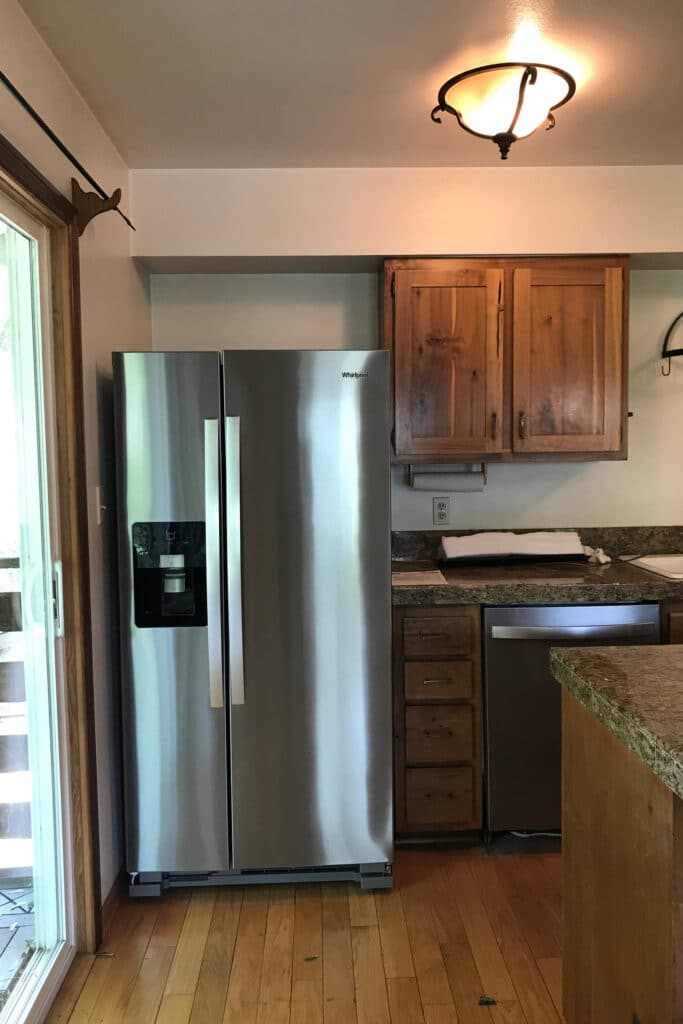 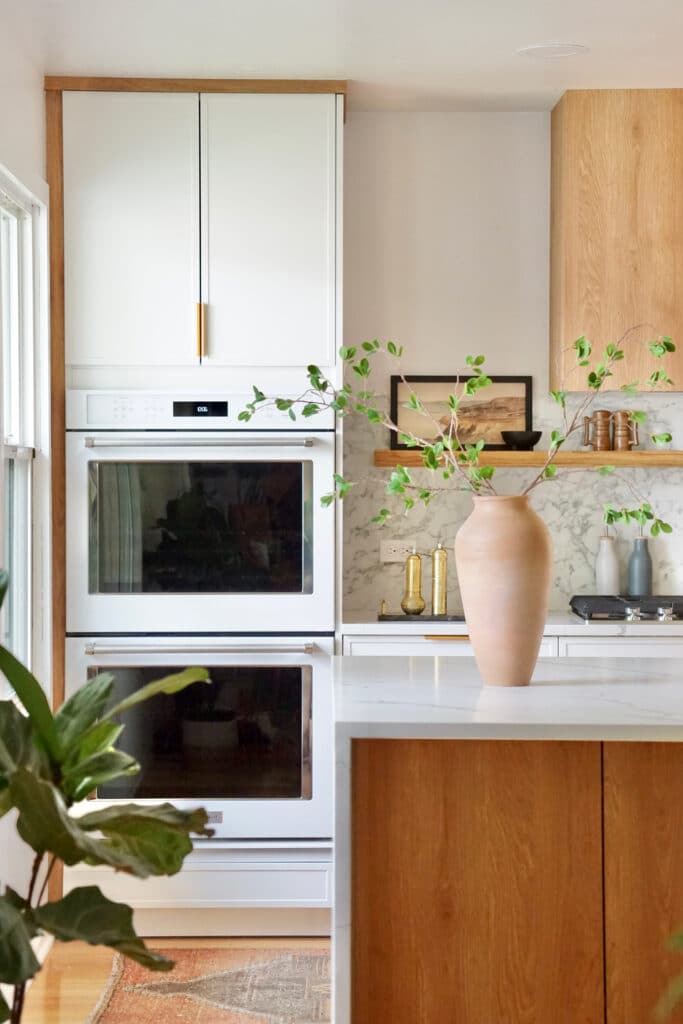 Woodman has always been a fan of white kitchens but wanted to balance the white with wood, so it still “felt modern but with warmth and texture,” she says. The kitchen now complements the dining space as well, which features a vintage Danish mid-century dining table.

To keep the kitchen on budget, but give it a custom finish-out, Woodman looked to Semihandmade and opted for the White Supermatte Quarterline fronts on the kitchen’s perimeter and Tahoe Impression fronts on the island, range hood, and trim. “I have been following Semihandmade for a long time and am a big fan of Sarah Sherman Samuel,” she says. “When I saw her Quarterline fronts come out, I was excited.” 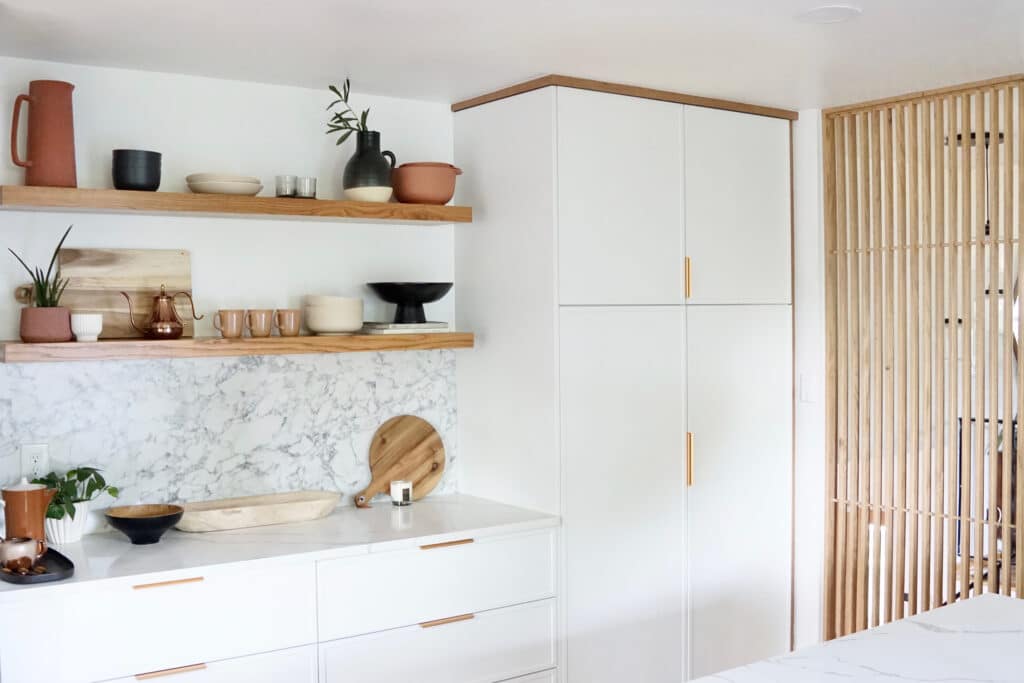 Design and Photography by Katie Woodman

Assembly was simple and Woodman placed the upper cabinets to ceiling height to create the illusion of taller ceilings. “I did all the cabinets and drawer assembly myself,” she adds. Plus, her three children, ages 8, 6, and 3, helped in any way they could. “They are no stranger to saw dust and tools laying around, and our youngest, a boy, loves picking up things and helping.”

To compliment the Semihandmade cabinets, she chose white appliances, which was another dream feature for her, as well as floating shelves handmade by her woodworker father-in-law, a custom range hood covered in Tahoe panels and Calacatta Laza Quartz by Stonemark for the island, which was flipped perpendicular to the home’s original island. 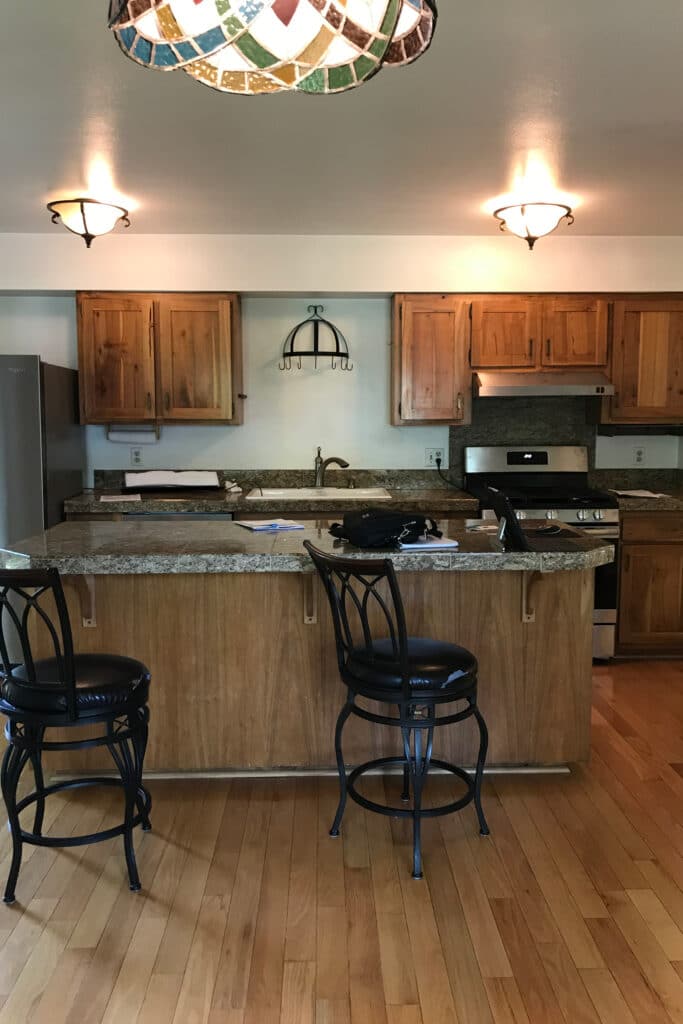 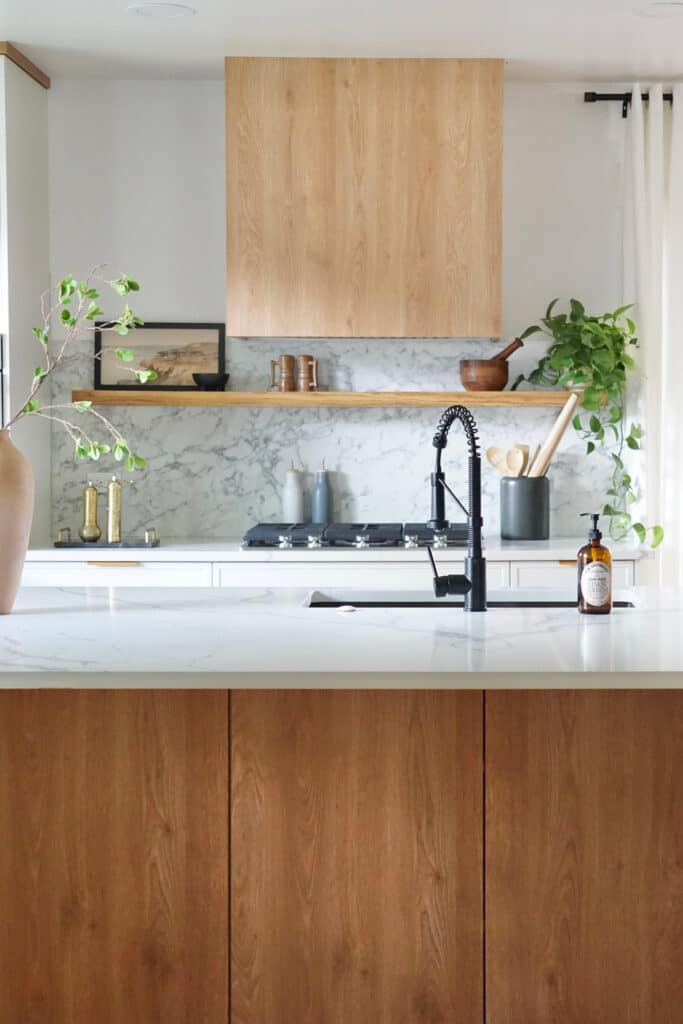 Design and Photography by Katie Woodman

Furthermore, she chose laminate sheeting for the backsplash instead of costly marble slabs. “It’s a Wilsonart Laminate Sheet in Marmo Bianco from Home Depot,” she says. “It cost us less than $100 and most likely saved us around $5,000.”

Every renovation has its bumps and for the Woodmans, COVID caused delays but there was a major delay after workers dropped their island slab. “Our kitchen is on the upper floor and while they were carrying the slab, they dropped it. “It shattered and broke our stairs and entry tile,” she says. They had to reassemble their temporary kitchen as a second slab was made.

Overall, the white-and-wood kitchen is much airier, functional and stylish than the original, and now goes with the rest of their home’s modern style.