For most homeowners, renovations can be added pressure, but for Dr. Celine Ord, an oncologist who renovates homes for fun, the process of transforming a space is—in itself—a transformative experience.

“Admittedly, it seems like a weird, high-stress way to unwind,” she says. Despite that, Ord (along with her husband, Justin Ord) has renovated a total of six homes since 2012. One of their latest projects is their very own Reno, Nevada house built in a Monterey Colonial architectural style, purchased just before the pandemic.

The five-bedroom house stands out from the rest of their projects, Ord says, “because it has the best floor plan and flow”. By incorporating eccentric design elements into the minimalist open floor plan, the couple accomplished a strong sense of personality in the space. 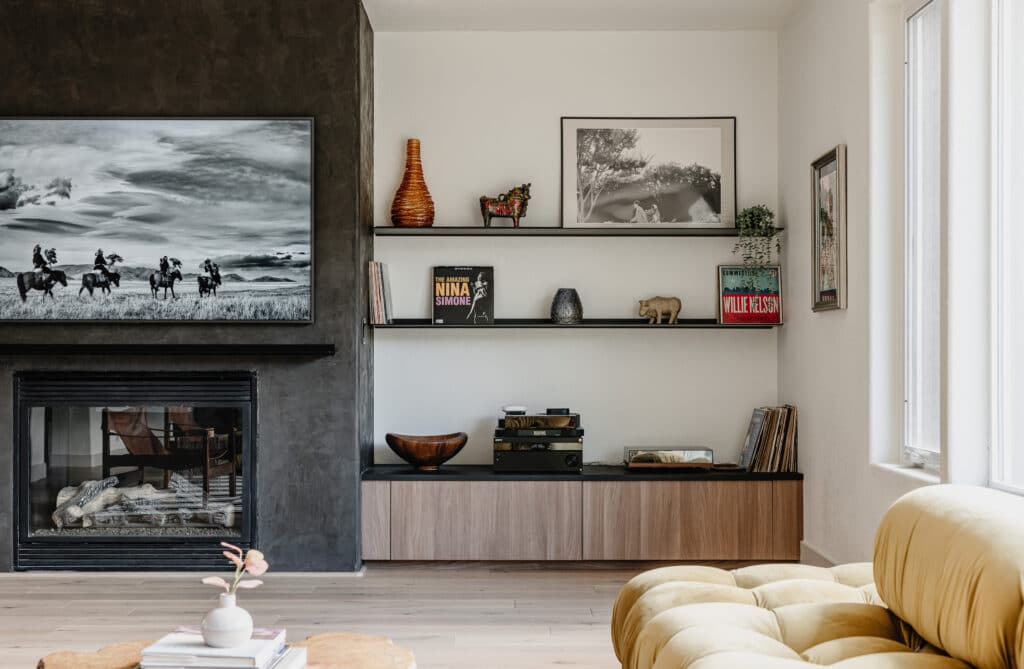 A Minimalist Take on Eclecticism

The Ords embraced eclectic style by combining eras, color tones, and design elements that don’t necessarily follow conventional style rules. In the living room, Ord incorporated a velvet Mario Bellini Camaleonda Sofa in Nettle Olive that stands out among the home’s natural tones. The funky nod to 1970s Italian modernism is right at home amongst a minimal striped Kye rug from Lulu and Georgia and raw wood coffee table, which the couple found scrolling Craigslist.

In the media room, a collection of personal items are arranged and displayed including a record collection the couple has built up over a decade. The shelf features a hidden cabinet portion clad in Semihandmade’s Impression Sonoma fronts, providing extra storage space that doesn’t take away from the minimalist appeal. Much of the art on the walls throughout the house holds personal significance to the family, including their black-and-white wedding portrait in the living room. Another object in the room that commands the eye: the large fireplace mantel re-faced in Portola Paints Roman Clay and adorned with a floating steel shelf from Shelfology. The mantel also functions as a beautiful way to frame the family’s television, disguised as art thanks to a black-and-white screensaver. 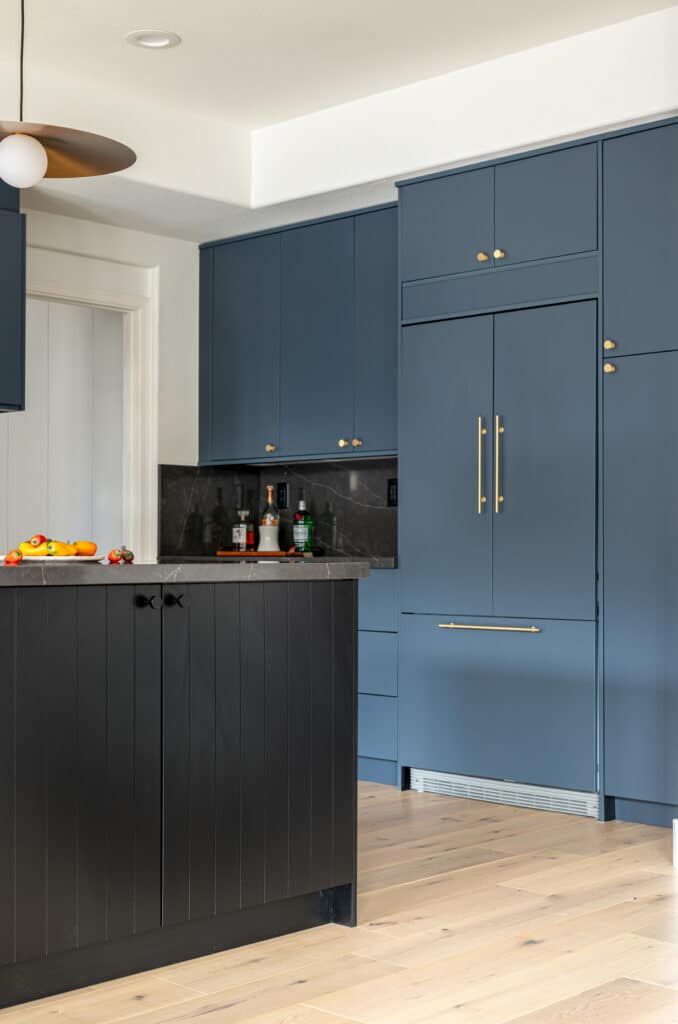 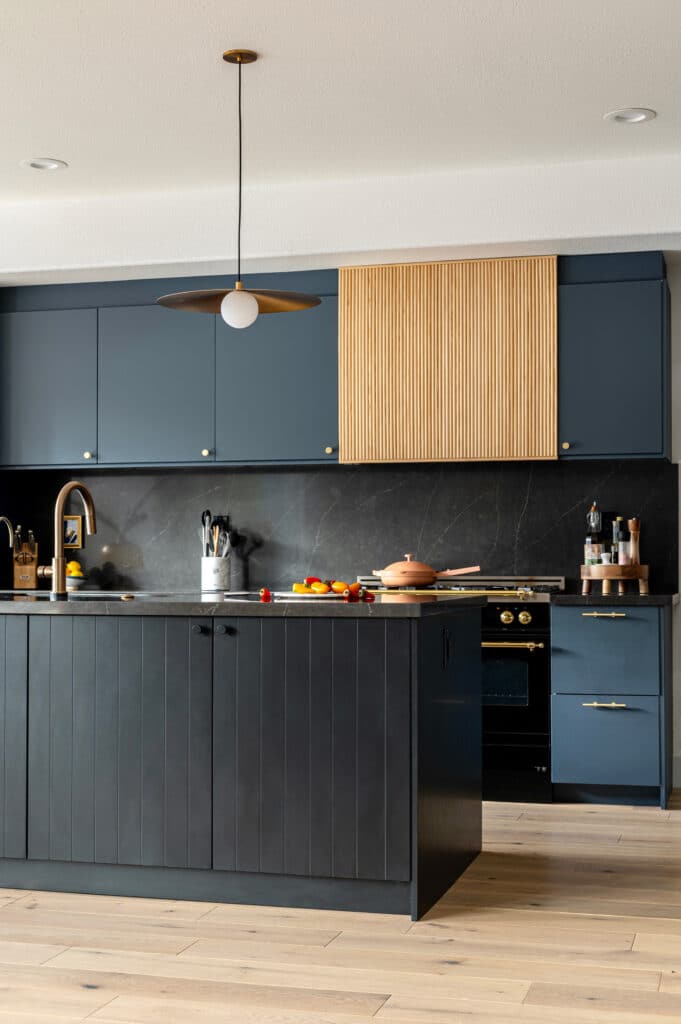 Gone are the days where homeowners fret over matching appliances in the kitchen. Instead, Ord created a stronger sense of uniformity by using Semihandmade Supermatte Night Sky Slab doors for the floor-to-ceiling cabinets, including the ones that house the refrigerator. The dark tones are continued in Broadway Black quartz backsplash and countertops, made by Datile.

The kitchen island features Semihandmade’s SSS Black Beaded fronts and serves as a serious focal point for the kitchen, separating the opened areas. It also functions as a dining table for the family. “We love having a large island with an eat-in area on one end that allows us to sit facing each other, much like a regular dinner table,” Ord says.

Together, the openness of the kitchen and living room has become the favorite hang-out spot in the house. “I love that I can be in the kitchen prepping dinner and cooking while interacting with my husband and daughter in the living room,” Ord says. 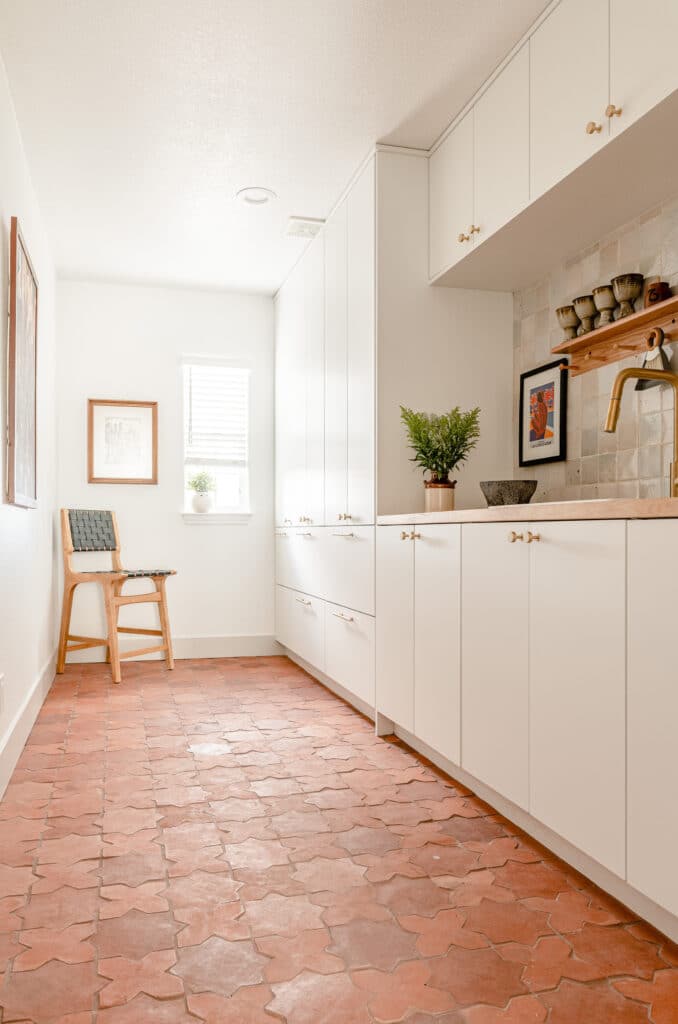 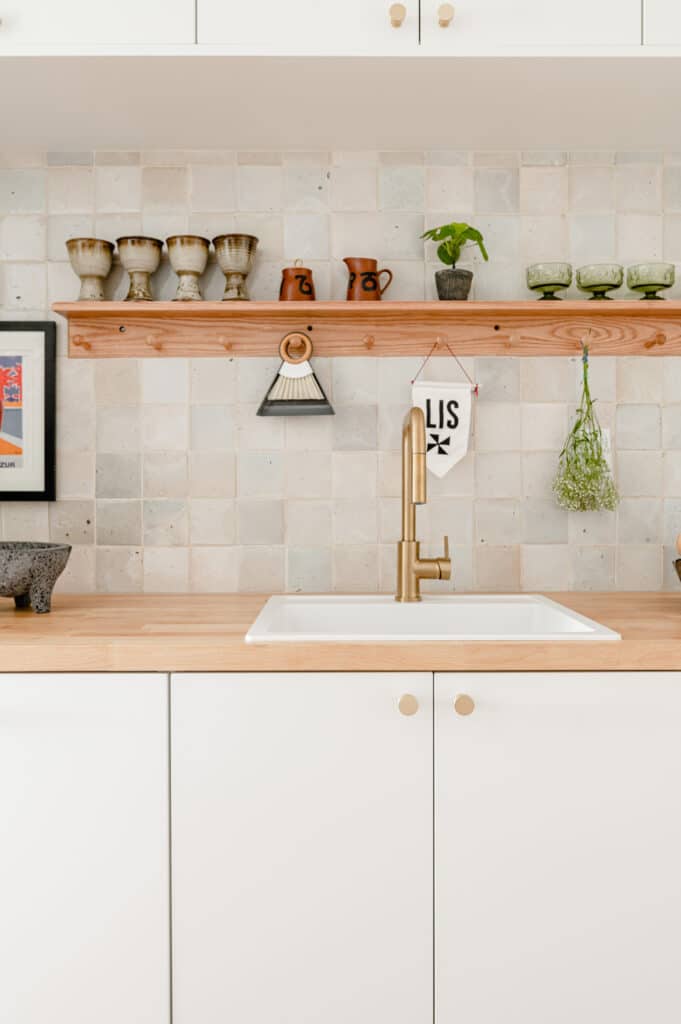 The pivot between the dark-toned kitchen and the bright-white pantry is sharp, but not stark. Ord was able to strike this balance by collecting visuals beforehand. “I do make mood boards in PowerPoint to see how things will look together initially and then tend to add things on-site last minute,” Ord says.

Her last-minute additions include adding or subtracting elements to balance out any colors or tones. “Our kitchen was looking very dark and moody, so I had our reeded hood panel made to add a warm, natural element for balance,” Ord explains.

The pantry is also home to natural elements, including the terracotta tiled flooring. A small window provides just enough natural light that, along with the cabinets outfitted in Semihandmade Supermatte White Slab fronts, proves a pantry can be more than a dark closet. 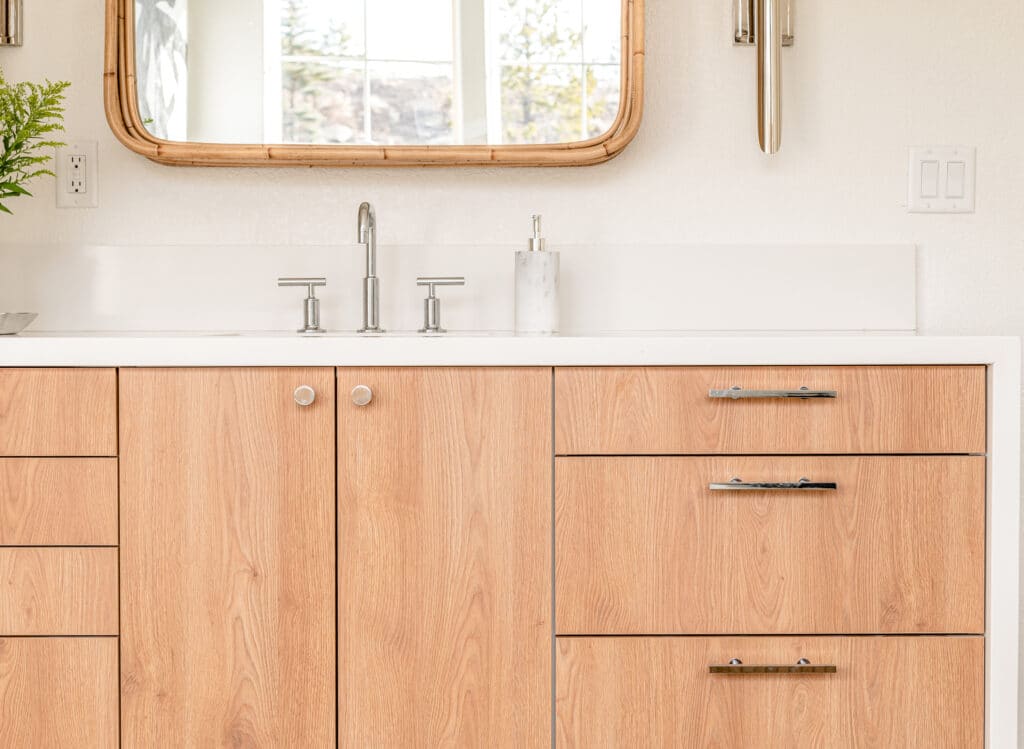 Carving a Space for Relaxation

Echoing both the natural tones and bright-white spaces found throughout the house, the bathroom designs accomplish a sense of real relaxation. Yosemite Falls Mantle Mirrors from Burke Decor—named for the cascading lines of their wood frame—complement the other wood tones in the room, including the vertical grain Impression Tahoe cabinet fronts. 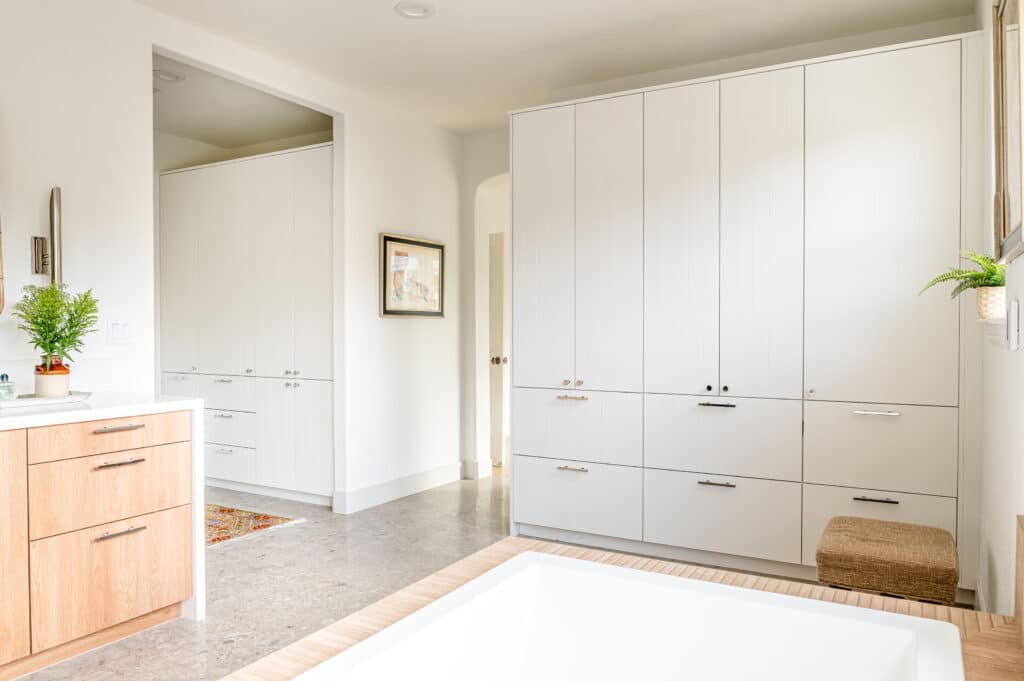 Ord’s advice for homeowners embarking on their own renovation plans is simple: don’t do it alone. “I like to ask other people’s opinions on specific design dilemmas because sometimes they see something that you can’t see because you’re been staring at the same thing for so long. I have received so many amazing suggestions that way,” she says.

In the end, however, she believes it’s important to always follow your individual needs and desires. “I’ve never regretted going with my gut,” she says. “Don’t ignore the way you live. You are the one who will have to live in the space in the end.” 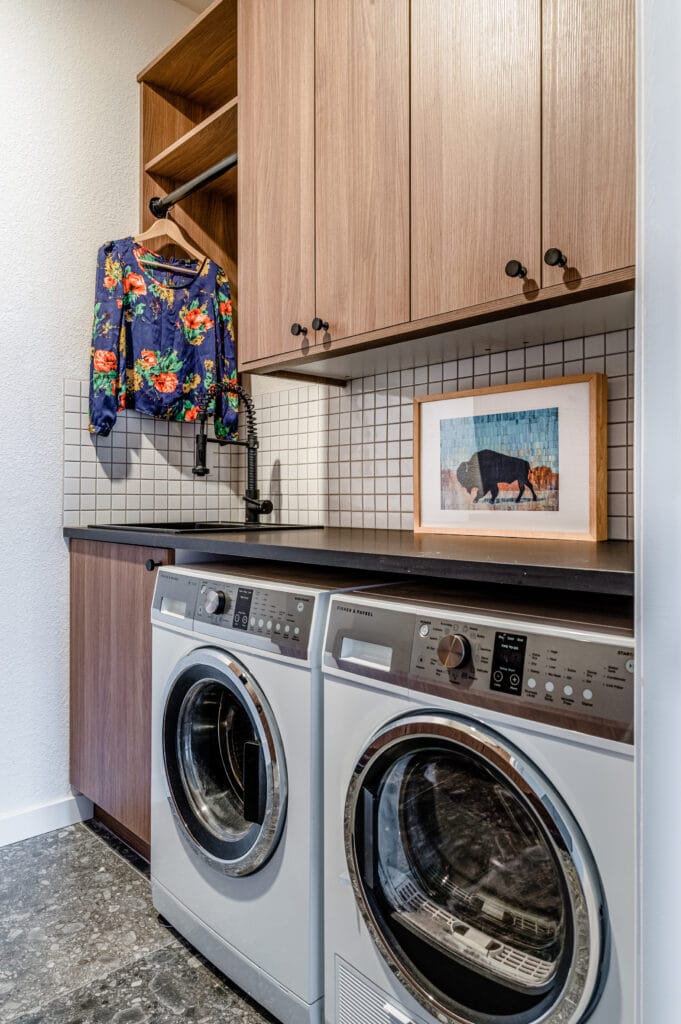 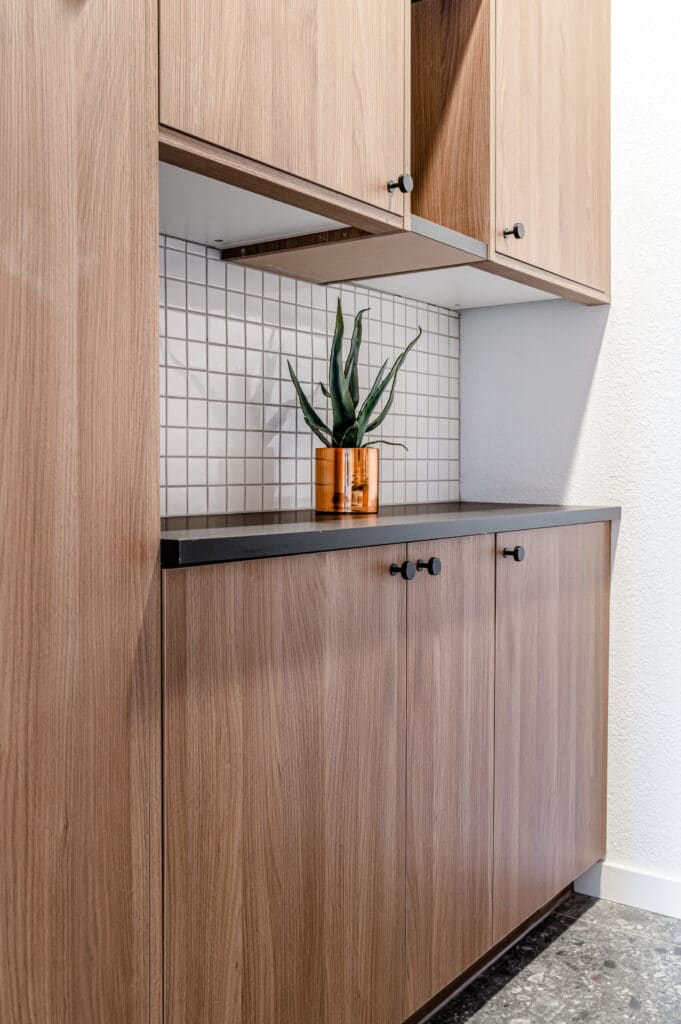